This week we finished off another box of 8” x 10” prints from the ‘30’s that gave us a little room on our desk. As goes all good plans, exit one box and enter another. We received a box from Gary Hartsock full of Grand National Roadster Show shots from the ’60s that fit perfectly in the new open space on our desk.

After some preliminary sorting, it became attack the new stuff time. We are fortunate enough to have a few old GNRS programs in our files and they came in handy as we used them to help us figure out what year the shots were taken and give us some info on the cars. Let’s take a look at three of them.

First up is the ride of Joe Cardosa out of San Jose (GHC_078). He entered this Naples Orange painted ’29 Ford in the Street Rod Roadster Pickup Class at the 1966 Grand National Roadster Show. Power was supplied by a 322″ ’56 Buick that was mated to a ’39 Ford box with Zepher gears. It featured a bed shortened 10″ and bobbed rear fenders. Note how simple the display was as compared to what they do today.

Noel Tilden of Laguna Beach entered this ’65 Astra J5 bodied ride in the 1966 GNRS (GHC_079). The body was removable and featured Buick headlights. Power was courtesy of a 327″ Vette. The wheels were off an XKE. He called it the Golden Sphinx probably because the car was Gold.

Last up of the show shots is Paul Feroe’s customized Go-Cart from Westminster, CA (GHC_080). It’s also seen at the 1966 GNRS. It was powered by two West Bend 820L’s and painted Candy Apple Red and had matching Metalflake Diamond Tufted upholstery. We can only assume that the second Cart behind it was a stocker to show what he had done to his. We love the angel-hair wrapped around the rear tire.

Every time we see an oddball magazine title we have to grab it and our next image is no exception (JMC_4654). We bet not too many people have seen this issue of Speedways that outdid Barbasol in the use outrageous red stripes as an eye-catcher (it worked on us). This was the “Big Summer Issue” published by a company out of New York called Biltmore Magazines, Inc. in 1953. Inside was a story by Griff Borgeson titled “How Fast Can Man Drive” all about Streamliners built to run at Bonneville. There was even some good info in the story. On the cover, we see Bill Spear in a Ferrari 225.

In Borgeson’s story, he had a couple of shots of Lee Chapel’s old Streamliner that we had never seen before. That’s a good excuse to show you another shot of the car most people haven’t seen before. MBB_631shows us Lee’s car that ran as a Class C Streamliner at Bonneville in 1952. A flattie motor ran a set of Chapel’s own OHV cylinder heads called “Tornado”. A second in class with a speed of 212.76 mph and a new class record of 224.144 mph was the reward. Car no. 563 is a chop-top ’34 Ford coupe entered as the Hi Speed Auto Supply Special. It ran 154.63 mph for third in class. On the right behind the Chapel push truck is the number 577 Class B Fendered Sedan entry called the A1-Red Special. It ran 103.44 for a fifth in class. For the trivia buffs, we outlined the cars and used a small version this shot on the cover of the 2006 Bonneville Program.

On Tuesday of this week, we found this old program dated May 30-31, 1953 (JMC_4653). It was given away free at the Paradise Mesa Drags down San Diego way. The San Diego Timing Association had J. Otto Crocker as their Chief Timer. He’s the same one who timed boats and S.C.T.A and Bonneville meets. Anyhow, back in the day the S.C.T.A. ran half-mile drags from time to time and they hooked up with the SDTA to use the Paradise Mesa strip. On the cover is a drawing of Paul Schiefer’s lakes T. Inside the program was a listing of all the class records and who held them at the moment. All cool trivia for us wackos.

ARN_009 is another one of those shots that we’ve tried to save from the Joaquin Arnett Collection. This one was snapped at the Paradise Mesa Drag Strip most likely at the May 30-31, 1953 SDTA drag races that correspond to the program above. On the right is Bill Pickford’s then-new Jaguar based special. He used XK-120 front and rear suspension that was mated to his own chassis. The car ran into the ’60s with a Chevy V8 under the hood and is still around on the vintage sports car circuit. On the left is a Cooper Formula III car of an unknown competitor. In the background is an assortment of hop-ups lining up for a blast down the Mesa strip.

Let’s look at one of the ‘30’s shots from our just finished box of 8” x 10”’s. This one was taken at El Centro on March 4, 1934, at the Imperial Valley County Fair track (DBC_1048). We see Mel Kenealy in his Lion Head Special number 18. The El Centro track was one mile in length and the AAA sanctioned race was to be 50 miles in length. It was also really dusty. Mel started in 10th place out of 12 competitors after qualifying with a time of 42.21 seconds. The race was red-flagged on lap 23 because of a nasty incident that ended up killing Ernie Triplett. By this time Mel had worked his way up to seventh. Note the corrals background that was in the center of the track. You gotta love the radiator stone guard borrowed off a production car and the early version of a flame job.

From time to time we run across duplicate shots from different collections. Our next shot is one of these. Instead of scanning the new shot we bagged the one from Richard Parks’ Collection and re-keyed it to go with the newer scans. We always check on duplicates and pick the better of the two to make sure we’re bringing you the best quality. Our re-keyed DBC_1075 shows Herb Morrow on the left having a little chat with Wilbur Shaw at Legion Ascot before he became a big star.

A few weeks back we got some really great stuff from Doug Stokes. Here’s one that showed a good 3/4 view of the last roundy round race car built under the guidance of Roy Richter of Bell Auto Parts (STO_010). Art Bagnell was responsible for the assembly and prep of this 3/4 sized midget. Note how beautifully proportioned the car is.

Here’s another shot of Bell Auto Parts TQ midget on display at an auto show in a slightly out of focus shot. Were not sure if it’s in L.A. or Oakland but we know it’s early in 1950 (MBB_032). Besides a good look at the front end of the beauty check out the car in the right background. Any guesses as to who’s ride it might be? All you have to do is check out our next shot to find out.

Car number 5 is Bud Hand’s Class A Modified at a Mojave Timing Association meet in November 1948 where it ran 121.95 mph. Bud was a member of the 4 Barrel’s Club and at the time held the class record at 127.76 mph with this Riley 4-Port headed B powered ride. The tall gent in the RoaDusters jumpsuit leaning on the Model A radiator in the background looks like Bob Morton. Bud went on to run a successful Sports Car repair shop for years on Santa Monica Boulevard in West Los Angeles. Bud later built an M.G. Special for road-race after giving up lakes racing and it survives to this day. 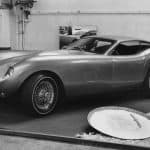 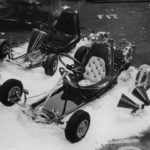 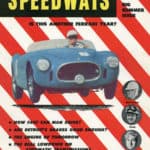 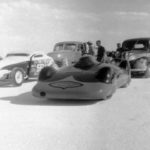 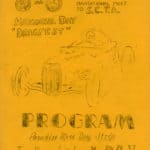 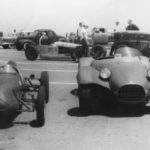 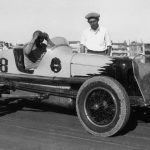 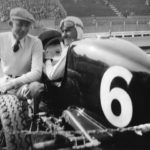 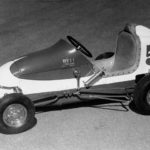 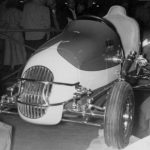 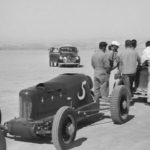 Previous Post: « From Dirt to Pavement in Nine Shots
Next Post: The Party Crashers »
↑ Top of Page