Early this week we finished scanning all the Bill Phy photos and sent them back to his family. Were in the process of cleaning them up (that nasty word retouch) and researching the subject matter in them. As a bonus, some of Bill’s shots had notations with the photos to help us in our quest of getting the picture’s players ID’ed correctly.

A good example is our first shot for today (BPC_103). We’re looking at a great shot of the Burke & Francisco Mercury powered Class C Streamliner at Bonneville in 1949. What looks just like a regular bull session is, in fact, an are you OK get together after the tank’s driver Bill Phy looped it at over 140 mph. Bill, in the jumpsuit on the right, wrote a cool little comment to go with the pix- “Note the dark stain where I sat”. The car would end up second in class behind Earl Evans’ tank with a speed of 158.71 mph. With a different headrest configuration and paint job this car that would become known as Sweet 16 and then end up on the cover of the August ‘49 issue of Hot Rod with yet another number and paint scheme. It also helps us with documenting the car’s history in the driver department as many of these early cars were driven by more than one daring shoe.

There are also some great non-race car pictures in Mr. Phy’s collection like this pick-em-up-truck shot at the lakes that he used as his race car hauler (BPC_005). We think it’s a ‘33 originally fitted with a 4-banger because the hood sidepanel don’t have louver recesses that will accept the V8 emblem. There is also an as-found shot of this truck before Bill lowered it’s lid lowered, added a yellow paint job and Custom Craft of Hollywood lettering on the side.

We don’t know anything about this Deuce shot except that it has a big Owie! (BPC_080). A closer look reveals that it’s been or still is raining which might explain the car’s present state. For you eagle eye Deuce-o-philes note that the hood side panel only has 20  louvers. Could it be an aftermarket piece already? It also makes you ask the question was the body trashed and the chassis reused?

Let’s shift some gears and look at our Florida connection’s latest bequeath. JSC_081shows us one rare piece of Drag Race History. It’s what’s left of a decal from the Fourth Annual NHRA National Championship Drag Races held in Oklahoma City, Oklahoma back on Labor Day, 1958. Jere Sheehan had it tacked up in his garage all these years before passing it on to us. We call that Way Cool!. Thanks Jere.

Even rarer is our next item that just happens to be a poster from the Montgomery, New York Airport Drags dated Sunday, May 31. A year wasn’t known so a check of old calendars pegs this one from 1959. Note that one Art Arfons from Akron, Ohio was the featured tire smoker at the meet but they screwed up the spelling of his name. We checked Drag News for any race info and came up blank. Could it be that since this was a NASCAR Sanctioned event Doris Herbert and the Stanasn’t interested?

dard 1320 folks weren’t interested? The poster measures 14” x 28” and was folded so we scanned it in eight sections and put it back together for you. The illustration reminds us of the Cook & Bedwell Isky-U-Fab Special that at one time was the World’s Fastest Dragster. Monogram also made a great plastic model of it that played host to many “Firecracker” blowups.

We’ve also continued our scanning of Doug Rasmussen’s Grand National Roadster Show negs and present a couple from 1970. Not all roadsters are created equal as in the case of Karl Johnson’s 1915 Buick Roadster entered that year (DRC_125). We can’t really call it a “T” Bucket but then again we could fudge a little as all you have to do is check out the grill shell off a “T” that has had Buick ornamentation added. Power was supplied by a 322” Nailhead circa ‘55 and yeah, that’s a model A front axle too.

Here’s the car that had everybody’s tongue wagging at the 1970 GNRS (DRC_130). It’s Andy Brizio’s not so instant “T” that that was detailed to the max ng the front doors of the Pan Pacific Auditorium (REP_034). Dig those large MOTORAMA letters cut out of plywood and covered with glitter and all the dressed up car nuts. Way in the back you can read Buick XP 300 and underneath it was the real GM show car by that name. Looks like L.A. car shows had Bling before the name was even invented!

We’ve used the last two shots to get you in the mood for our latest we didn’t know it existed until now find (JMC_5058). Automobile Topics, the Magazine, was established in 1900 and was still going strong when this issue was published in October 1951. If you look at the bottom of the cover it reads “Buick’s XP-300 Experimental Engine”. Gee, we just showed you a picture of the car that the engine is in. The big picture on the cover shows you the Kenz & Leslie Streamliner that at the time was America’s Fastest Car. Inside Hank Elfrink penned a story about the car’s exploits at Bonneville and it running a superfast one-way lap at 230.769 mph and setting a record at 221.479 mph.and grabbed all the marbles. The wild paint job was the work of that Himsl guy and featured a pearl white base with hours of masking and airbrushing. Roy had a good teacher in his dad and continues the AMBR winning ways till this day.

Shifting gears slightly is another car that visited the Bay Area show but is seen in this shot at Pete Petersen’s Motorama in ‘51(REP_035). Like our earlier Buick based ride this rod features a ’22 Dodge body on a Deuce chassis. It was owned by Les Callahan and massaged by one George Barris. At the ’50 Oakland show, the car featured a different paint job and nerf bar. It also ran Cad Sombrero caps at the time. Four months before the Oakland show Les had run the car at El Mirage and managed to do a lap at 117.95 mph. It was powered by a 248″ ’46 Merc with Edelbrock heads and his own intake manifold. All we can say is not bad for a show car that was constantly changing.

Our next shot was also taken at “Pete” Petersen’s ‘51 Motorama and shows you what it looked like after entering. The car was powered by two Ford V8 flatheads, the front one displacing 275″ and the rear one 296″.

Having shown you the car on the cover it’s time to go back inside the ‘51 Motorama and show you the K&L Liner as it “almost” appeared at the show (REP_066). We say that because your eyes are correct in that the old film has delaminating and ruined the look of the beautiful Baby Blue number 777 Floyd Clymer Motorbook Special. Petersen had this “Publicity Shot” taken showing Kenny Grau of Los Angeles Television Station KTLA asking some questions about the Kenz & Leslie Streamliner. City at Night was the name of the TV show hosted by Grau and it was broadcast live at the week-long show. The tall gent on the left is none other than Hot Rod Magazine Editor Wally Parks.

Being in the “Show Biz Mode” we captured this dressed in black partially wrapped Lamborghini backing into a slot at Bob’s Friday night by a stunning femme fatale (JMC_5060). Not knowing what to focus on first, when it stopped moving the door lifted skyward and out pop’s a black shoe that we are still trying to figure out how someone could walk in. On the side, in gold, it said Bat Girl. Enough said. She vanished after a dress straightening. Bummer.

We’re gonna backtrack for a second to another Automobile Topics magazine we just found from November 25, 1940 (JMC_5059). Besides being a cool looking cover design what caught our attention was the futuristic auto design on it. The cover design and illustration were credited to George W. Walker. For you history buffs, you’ll find Walker did design work for GM and Graham-Page before the stock market went south in ’29. Then after doing sub-contract design work for Ford for over a decade and a half, he was finally hired by them full time. He is credited with the original T-Bird two-placer and then magically becomes FoMoCo’s Corporatesident of Design in ’55. He made the cover of Time Magazine in November ’57 and was put out to pasture in ’61 when he was forced to retire because he had reached the ripe of 65. Yikes! George passed away in ’93 at the age of 97.

We’re gonna jump forward again to the missing driver Lambo in our next shot (JMC_5061). Is it a coincidence that this shot of the futuristic car’s headlight shows the drive-in’s logo in a circle in it while the magazine cover shows a car in a circle? If we change red to orange and black to blue might we have something? Seriously we lucked out and spotted the reflection as we were walking away from the car and had to shoot it.

Next up is basically another black car backing up that has real paint instead of a wrap (JMC_5063). This Deuce 3-window coupe just pulled in and was inching into an open slot as we were leaving. It was instant Graffiti time and all that’s missing is a hot car-hop to hang a tray on the yet to be inched up window with a burger, fries and shake on it. Now if we could repaint it yellow, get that bad-ass ’55 Chevy clone we saw in Bowling Green, add Candy Clark and Suzanne Summers to the mix and find a deserted two-lane road nearby it would make our night.

To finish off this week’s story on equal footing of old and new it was time to find an interesting reflection shot of the Deuce just like we did off the Lambo’s Dagmar. Walking around the car the decklid asked the question am I a “Dutch” Rabbit or not? I can easily see the reflection of my t-shirt and hand covering the flash so as not to blow out the image but am still wondering if that’s a rabbit with turned up nose, bloodshot eyes and horns or not. The guy on my left and on the right in the reflection is probably asking the same question. (For those of you born after 1960 “Dutch” was Kenny Howard and went by the made-up name of “Von Dutch”. He was famous for consuming lots of free adult beverages when plying his trade of pinstriping and applied his lines in such a fashion that you could see faces in the finished work. In one of the little pages ages ago he showed the readers how to construct a Rabbit face line by line.)

At the end of that week, and all of next week the Great White Dyno beckons so stay tuned and wear lots of suntan lotion. 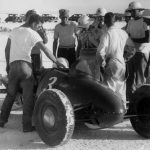 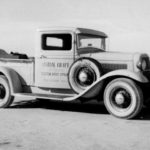 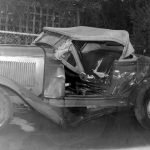 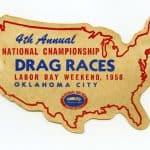 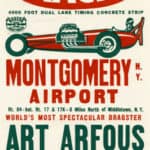 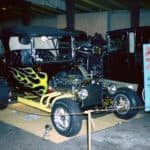 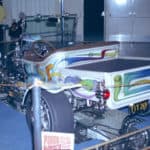 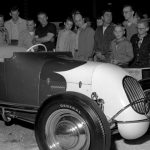 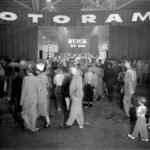 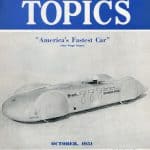 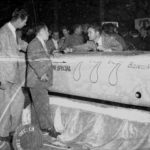 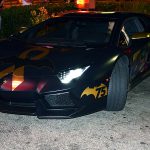 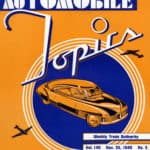 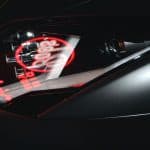 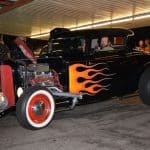 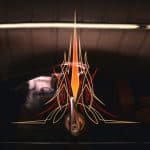