While you’re checking out this week’s story I’ll be getting sunburned and checking out all the neato-keano rides at Bonneville. This will also be the first time in 19 years and 36 visits to the salt that I’ll be a spectator instead of a worker so one can actually wander around and take pictures for you in a relaxed state of mind instead of having to deal with some fire drill. I call it cool.

Here are a few shots to tide you over.

Since the salt is all about going fast we present Mal Hooper posing with his recoooSpecial streamliner in 1954 with some of the record trophies the car had collected (TFC_110). His crew consisted of sponsor Bill Shadoff, chassis builder Carl Fleischman, engine builder Ray Brown, Bob Taylor (whose collection the photo is from) and Herb Fisher. At the time liner was the fastest single-engined unblown car in the world with a speed 272 mph.

B-ville is about exotic cars and William Scace from Chicago showed up at the salt in 1959 with this Mercedes 300SL minus windshield (rd setting Shadoff Special streamliner in 1954 with some of the record trophies the car had collected (TFC_110). His crew consisted of sponsor Bill Shadoff, chassis builder Carl Fleischman, engine builder Ray Brown, Bob Taylor (whose collection the photo is from) and Herb Fisher. At the time liner was the fastest single-engined unblown car in the world with a speed 272 mph.

Some other real exotica showed up in ‘59 in the form of a four-engined monster seen in our next shot (GHC_039). Mickey Thompson’s brand new Challenger I receives a last-minute wheel tightening check before the car’s first run. By the time the number 555 Class A Streamliner went home the Mickster had captured a first in class with a speed of 362.318 mph and set a new class record of 332.809 mph bumping the one he established in ’58 with his twin-engined “Dragster” at 266.866 mph.

A decade later we see Dave Koskela in his Class B Gas Roadster at Speedweek. The Bantam bodied car was powered by a healthy 398″ Chevy and chasing after the Mark Dees-Bob Joehnck class established in ’58 with his twin-engined “Dragster” at 266.866 mph.

A decade later we see Dave Koskela in his Class B Gas Roadster at Speedweek. The Bantam bodied car was powered by a healthy 398″ Chevy and chasing after the Mark Dees-Bob Joehnck class record of 205.894 set in 1968. The roadster ran 201.243 mph before reuniting with its trailer and the ride home to ended up third in class. Dees had run 213.14 mph for first and the Peek Brothers 212.51 mph for second. By the way, the Dees-Joehnck car went home with a new record at 210.243 mph.

For a little back story on the new record holders, Joehnck was involved with putting on the first drag races at Goleta Airport before there was such a thing as Santa Ana and did back door stuff for GM with a then-new car called the Stingray. Dees is most famous for being a Barrister and wrote the quintessential exotica book on Miller Race Cars. You could say they were typical Bonneville racers with varied tastes.

When you think B-ville you automatically think Studes (GHC_048). In this shot, we see Verland Marshall’s Class X ‘53 Studie Commander Fuel Coupe getting pushed off by a ‘59 and later Studie Hawk for a ran in 1969. Verl was after his own record set in ’67 at 135.798 mph but the best he could do this year was a lap at 134.12 mph that was only good for a first in class. Note he had painter The Hypochondriac as his driving name.

B-ville is also the home of the strange (GHC_059). R. Smalley brought his little Ballpoint Banana Class I Streamliner all the way from North Tonawanda, New York (the home of racing great Jim Hurtubise) to have a go at the Orange Crate (body designed by Rod Schapel who created Chet Herbert’s Beast III liner and consulted on Breedlove’ Spirit of America) record of 142.693 mph set in 1969. The Banana’s seen chugging down the track after it’s push-off. Smalley turned out and didn’t receive a speed because he didn’t click the timing light at the two mile. The only other competitor in the Ballpoint’s class was the Auto Parts Performance car that managed to run an embarrassing take home a first in class.

To take the Strange right off the map at the Salt all one had to do is have a look at the Herman Goode Aesthetics Racing Team’s quadra-cycle? out of London, Ontario Canada (CLA_011). The _011). The year was 1972 and a closer examination will help you’ll figure it all out.

All dressed up in its 1969 paint job, we see the ‘72 version of the number 901 Barr-Lloyd-E.T. Mag Class G Streamliner that ran an amazing speed of 164.83 mph. Today the newly restored car is owned by Dennis Varni and made its re-appearance at the Century of Speed Exhibit at the 2014 GNRS.

If you think Land Speed Racing is for the Birds, you’re right. We see the Lindsley’s Plymouth Superbird at rest during Bonneville’s 25th Anniversary Event in 1973. Larry Lindsley was the shoe of the Class B Production ride and ran two laps for an average of 211.600 mph to bump the old 210.778 record. Larry’s pop, Jim, was a mover and shaker in the S.C.T.A./BNI for years and Larry himself is one of the select few who’ve run over 300 mph at El Mirage.

Bonneville has always been about going fast and here’s one that’s got its name on the Hot Rod Magazine Fastest Speed of the Meet Trophy many times. It’s the Poteet-Main Speed Demon captured in 2013. T captured in 2013. T13. The new generation of land speeders are pretty high-tech but you can never take the hot rodder improvision on the spot out of the mix. While the team was prepping the car for an early morning return run someone had forgotten to bring a funnel to put ice (to cool the turbo intercooler) into the car with. You can see the solution to the left of the rear fin, whack the bottom off a cone, turn it upside down and insto-presto they were back in business again. Ya gotta love the place.

We’ll have a ton of new shots for you next weeks. 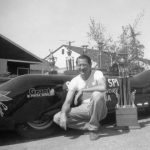 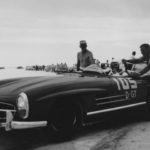 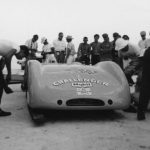 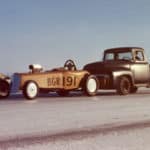 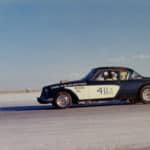 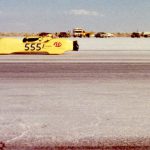 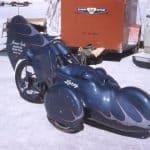 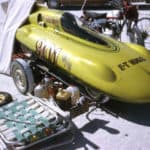 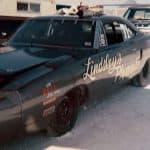 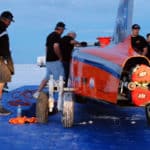