We always think of the roots of hot rodding in Southern California as emanating from the dry lakes. The more you dig into that premise the more we find it a little flawed. All one has to do is look at Henry’s T’s in the ’20s and all the speed-buggies for the road they turned into. There was also a thing called dirt track racing that spawned literally hundreds of speed parts for T’s and later A’s. And let’s not forget all the parts for Dodges, Chevies and a gaggle of other makes that are long forgottentor picture. Add to all this that we have pretty good weather all year long so you could find motorsports everywhere. You could go up to Pismo and race on the beach, or go hillclimbing up at Wrightwood. There were also local schools that had running tracks that were used for midget and motorcycle races. In the end, though, the best place to find racing was on public streets.

We’ve found quite a few pictures of public roads with “Race Cars” on them. We even have one of a car going off against a horsforgotten to get a better picture. Add to all this that we have pretty good weather all year long so you could find motorsports everywhere. You could go up to Pismo and race on the beach, or go hill climbing up at Wrightwood. There were also local schools that had running tracks that were used for midget and motorcycle races. In the end, though, the best place to find racing was on public streets.

We’ve found quite a few pictures of public roads with “Race Cars” on them. We even have one of a car going off against a horse. We even have the not so squeaky clean Wally Parks attending some and our old pal Bob Rufi being busted driving his alcohol-fueled, break-less streamliner near the future Los Angeles International Airport. Then there are the stories. We’ve got future car dealer Bob Estes facing off with Clark Gable, Champ cars driving from the Bay area to Los Angeles without registrations. Then there were the guys who would regularly block off out of the way, and not so out of the way streets for speed contests. It’s a long list.

Some of our ongoing collection additions contain a lot of shots that are all over the ballpark in the content department and cover multiple decades, kinda like So-Cal rodding. Let’s look at a few recent scans from Doug Boyd’s treasure trove. First up is this shot, taken in Riverside back in January 1932 (DBC_1080). On the left is Lee Chapel’s Modified that also ran at the lakes. Earl Brentlinger is the driver. We got another pix of the car after it crashed. It was later converted into a sprinter like the shot we showed you last week. Note the Model A in the middle still has it’s running boards but is minus fenders. The front axle on the modified T on the right supposedly is running a Mercury front axle.

Our next shot was un-dated but we know it was taken at the Antique Nationals (DBC_1219). It shows a Model T racing head made by the Pace Brothers. We hit a dead end on the Pace’s but the dual plug head was cast in Colton, CA.

Our next shot was taken in June 1988 and shows Super Fours member Dave Martin’s (he’s on the left) Class G Gas Lakester (DBC_1210). The car started life as a McNamera Formula car that was made in Germany. It ran 148.001 mph on a record of 151.077 mph. The combo finished third in S.C.T.A Points Championship that year. The car is a survivor and was last seen in an updated form at El Mirage in 2014. Dave ran at the lakes before WWII as a member of the Sidewinders.

This shot from August 1981shows a Ford Banger powered rail-job at the Antique Nationals held at Irwindale Raceway (DBC_1228). We’re at a loss as to who the owner and the female driver was.

Let’s have a look at some of Terry Baldwin’s shots, shall we? His first one was also taken at the Antique Nationals held at Irwindale Raceway but the date is now May 1974 (TBC_147). The car in the far lane is Jack Stecker’s old Lakes/Bonneville/drag car called the Black Widow. It still exists today in a private collection and was seen at last year’s Grand National Roadster Show in the Century of Speed Hall. We have no clue about the Model A in the near lane.

In the cool Hot Rod department, we came across this slick ‘31 Model A (JMC_5367). It was hard to get a clear shot of it because of all the looks it was getting but we managed this one for you with our camera about eight feet in the air.

We’re looking at former Lions Drag Strip photographer John Ewald in the Master Car Top Fuel Dragster being pushed up to the starting line to get fired and cackle it’s way down the strip and back in front of the grandstands for all the fans (JMC_5370). The car was originally built back in 1968 by Jim Davis and ran in Top Fuel with Davis driving. John found and purchased the car in 2004 and had it redone with a 392″ Hemi for power and has been on the cacklefest road ever since. Nice ride.

Us car guys always at shot (TBC_161). We see a Hudson based Indy car that first showed up at Indy for the 1932 500 mile race. Entered by R. G. “Buddy” Mar as the Hudson Special and was driven by Chet Miller. The powerplant was a 255″ Straight-8 Hudson. The blue and silver car started the race in 29th place and went out after completing 125 laps with engine trouble. He was awarded a 21st place finish out of 40 starters. The car showed up again for the ’33 race as the Marr Special again driven by Chet. It was the same colors but ran as number 28 and minus the Hudson logo on the cowl. This time he qualified her in 32nd starting place in a 42 car field and managed to complete 163 laps before a con-rod went away. Al Miller drove a team car this year but with a slightly different chassis configuration. He qualified in 24th and dropped out two laps before Chet did with the same problem for a 21st place finish. The dirt covered barn find was restored to its 32 version.

Same place, different building. Imagine walking into a falling down structure filled with old race car parts. This shot shows a complete Fronty-Ford hidden with miscellaneous castings (TBC_180). The whole room was packed goodies like this and would probably be worth a fortune today, let’s hope they all survived the years.

This last Saturday about two miles from the original Irwindale Speedway lies the new Irwindale Speedway. Thanks to our buddy Doug Stokes (head of Public Relations for the track) we got to visit every nook and cranny of the racing plant for this years edition of the Mooneyes Christmas Party. The weather was perfect and the place was packed wall to wall with customs, venders, drag cars and pin-up girls. It was like a kid being in one big candy-cane store and our camera was kept busy shooting curvy subjects and smokin’ tires. Let’s look at a few, shall we?

There were lots of cool customs about, and this slammed 1951 Chevrolet Fleetline with a lowered lid was one of them (JMC_5355). It featured a ’53 Chev grill-bar with extra teeth and the ’57 bumper fittthave to learn the hard way (JMC_5369). We snapped this ‘65 Chevy II Nova about 10 feet behind it during its first burnout and got pelted with mass quantities of foreign objects. It’s been a drag car for only two seasons and the driver and crew are having a blast just like we did.

We learn fast and moved over about eight feet and got on our knees for this one (JMC_5374). Some old Hooker’s are plain old smokin hot as in the case of Ken Moreland’s Chevelle doing his tire warming exercise. He held the tach at 7’000 rpm while laying down his smoke screen, cough.

To get you into the Christmas mood for the next week or so we enlisted the help Santa’s taskmaster, Ms. Clause (JMC_5366). Word on the street has it that ya better do a little roof reinforcement for her arrival next week, you don’t want the sleigh crashing through your ceiling with those engine blocks you wanted that she’s got stashed in the bed for you, do you. 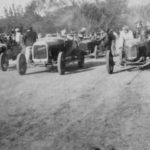 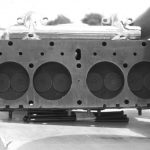 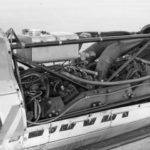 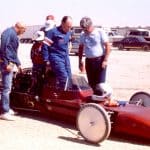 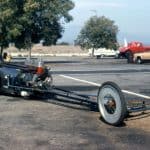 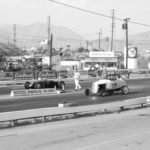 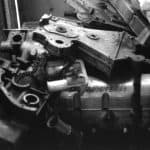 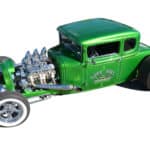 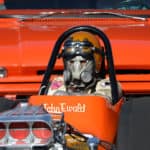 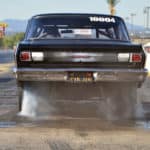 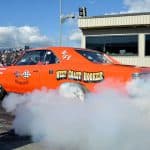 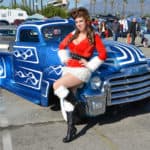