It was a pretty productive week at the AHRF as we finished off scanning all of the John Haigler Collection that consisted of 182 images. We still have to do some research on most of the shots but we’re lucky because most of them had some notes written on them to help us in our search. We’ll get to a couple of his shots in a minute.

Next up is a nice looking T-bodied ride (JMC_5491). It had just pulled to a stop and had one last throttle blip before the ignition switch did its job, and silenced the mill. The driver checks the timing slip and then climbed out. At first glance, it’s just another Altered, but after talking to the owner it became quite a bit more important. Take a gander at the chassis underneath. It an old John Buttera Funny car chassis that maybe someday will find it’s original body. In the meantime the owner is having some fun with it. Nice Model A in the background. Beyond that is turn two of Fontana Raceway.

Another “Antique” that was a real head turner is the Pat Ganahl restored Ike Iacona rail job that he brought out for a few trips down the tarmac. Pat was in the midst of a little tune-up and had stripped the beautifully streamlined nose of the car. While sitting on his trailer it said shoot me so we did  (JMC_5493).

These days everything under the hood (if it has one) gets a little dressing up too (JMC_5492). In this case, the Generator on this flat motor has been graced with a little nose art. We looked for the real Lilly but didn’t see her darn it!

The Antique Nationals is all about the old and everywhere you looked that’s what you saw. This sano Model A ran a Ford Banger that was so clean you could eat off of it (JMC_5490).

While we’re on the subject of Bangers lets have a look at one that you don’t want to eat off of in a Bobbbe day Nordskog shot dated September 17, 1933 (BNF_090). It’s the Claud Neal & Hi Halfhill entry is seen at Muroc. With Frank Pommer, they ran a Riley head on a B-block and stuffed into the T you see here. The car ran 114.65 mph. The program listed the car running with a 2-port head, but 4-port power was handwritten in the program. This photo was captioned 4-port also. To the right of the steering wheel in the back, we see car number 31. In the program, it was listed as belonging to George Robson and was also fitted with a Riley head. It ran 80.35 mph.

This is a perfect time to illustrate that many early lakes racers went on to become professional racers. Take for example George Robson who drove the 31 car at the lakes and 13 years later is seen being pushed off for some practice laps before qualifying for the 1946 Indy 500 mile race (PCC_163). George started in 15th spot in the blue and white Thorne Engineering car that was built about a mile away from where I’m writing this. He went on to win the race. The little fellow pushing by the right rear wheel is Chickie Hiroshima who went on to be chief mechanic on the ‘60 Indy winner.

To go from the amateur ranks to the top rung of the sport requires lots of hard work and lots of practice. In George’s case, he had a little family help but not the kind you’re thinking of. His help was in the form of competition against his brothers, Hal and Jim. CKC_2024 shows the three of them in different shots up in Oakland in the late ’30s. To add a little more interest to the story, I’ve been told that Jim, the one nobody really knows anything about, was the best of the three.

Here’s a new hot off the scanner shot showing Bud Rose at Southern Ascot in a print dated November 10, 1937 (CKC_1864). Bud whose real name was Harry started racing at the lakes in the ’30s. The car was supposedly built by another famous lakes racer by the name of Willie Utzman and ran a big port Winfield flathead on a B-block with special 2″ bored out Model D Winfield carbs. For you trivia buffs, note the border on the print. It was originally designed for use around the ‘32 Olympics and was still being used five years later.

Here’s another shot of Bud Rose with the same car around 1950 wearing the number 3 at Carrell Speedway (GGC_599). In the back is the number 98 of J. C Agajanian driven that day by Troy Ruttman. It was shoed by Johnny Mantz before the Rutt and Duane Carter after him. Clay Smith was the Chief mechanic. To the car’s right (your left) with the S on the nerf bar is the Sunset Auto Suppthe Suly ride from Long Beach driven by Bob Scott. Behind Aggie’s car is the number 2 Emmett Malloy car that Ruttman also drove.

Our next shot was taken at a Mojave Timing Association meet at Rosamond Dry Lake on November 2, 1947 (BMC_090). Doc Boyce-Smith of the Four Barrelers was the entrant of this class B Roadster. A 267” flattie powered the car to a 2nd in class with a speed of 120.16 mph. The car also raced as a track roadster 5 nights a week at local tracks like Bonelli, Gardena and Huntington Beach. It was driven by Don Freeland. John Chambard who supplied the photo via Bob Morton did a lot of work on the car and was also a crew member.

Don Freeland graduated from the above track roadster to the top rung of the sport as a driver for many years at Indy. He’s seen with his movie camera next to the number 3 Ansted Rotary Special as it’s being pushed down pit road by his crew during qualifying for the 1957 Indy 500 (JHC_287). The cream and black KK500D was powered by a 252″ Offy. Don started the race in 21st and was flagged home in 17th after completing 192 laps.

To close out this week’s story here are a couple of John Haigler shots that were mentioned at the beginning of the story. First up is this cool shot showing Clifford “Windy” Lindstrom on his Harley-Davidson before attacking a hill most likely around San Louis Obispo in 1940 (HAI_032). Born in 1905, Windy started riding at age 15 and won the Pacific Coast Class A Hillclimbing Championship in 1930. He continued riding into the early ’50s winning his last National Title in ’49.

This last shot shows Ted Evans having a little fun up in Dixon, California sometime before WWII (HAI_023). If you think finding old race car info is a bear, try finding old AMA motorcycle results. We know of Ted because that’s where I bought a road race fairing for my Yamaha YDS2 back in the ’60s. His shop on Washington Boulevard was a block away from the old Culver City track where we watched Parnelli hone his skills. 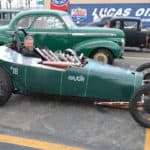 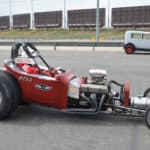 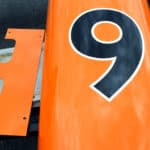 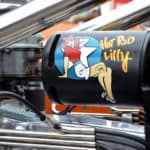 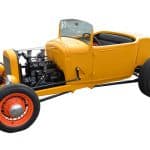 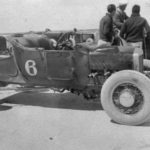 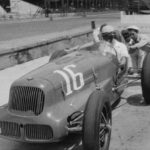 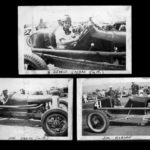 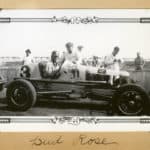 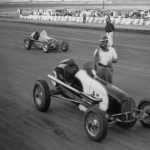 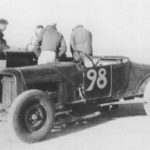 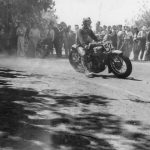 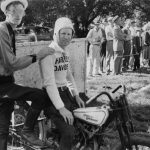 It used to be a Funny.

Bud is ready to go to work.

Ready for a climb.

Previous Post: « Variety is the Spice of Life
Next Post: Celebrating a Special Day »
↑ Top of Page