It’s that time again for another weekend spent at El Mirage for the second race of the 2015 S.C.T.A. Season.

In the June 22 issue, I mentioned the  Skip Pipes Racing Class F Blown Fuel Roadster running the number 374 (JMC_5485). We stated it was powered by a GMC 6-banger with a monster Turbocharger setup. Dan Warner called during the week and said it indeed was badged as a GMC engine but was actually a Toyota 2JC in disguise. Looks like you can’t trust our eyes or those lakes racers for having a sense of humor.

After depositing some refreshments and eats at the White Goose Bar Racing compound on Saturday morning it was off to scour the surrounding acreage and take some pictures for you. Like the last meet, the Official Results won’t be posted for a few days so we’ve taken the liberty to fill you in with as much info as we have at this time.

The first stop was in the Motorcycle inspection area. That’s where we snapped The Schaefer &  Chambers 1650cc Class A-PF ride while waiting to be inspected (JMCd (JMC_5511). At the June meet Kenny Schaefer jumped on the bike and cruised through the traps at a speed of 186.233 mph to smash the November 1995 Kenan Tatro record of 145.979 mph. When we find out what he ran this time we’ll update you.

A walk over to the Car Inspection area was next on the agenda. That’s where we found the Jim Hoogerhyde and Jack Costella Class I Fuel Lakester with a few surprises added (JMC_5512). In June, Jim had smashed the Team McLeash Brothers Class I Lakester record of 179.812 mph set back in October ’08 with a sizzling run of 186.086 mph. For the July event, crafty Jack re-read the rules, added some fenders to the front of the car and converted it into a streamliner. With the new wings up front, they proceeded to attack the 168.952 mph record of Jim Knapp’s Barnyard Bomber set back in November of ‘06. Without the official results, we can’t give you a speed as yet but we know that Jim ran over the old record and it was certified. Seems race day was also Jack’s Birthday collection.

Bill, Dean and Dave Kennedy spent the last few years putting together and massaging this slick looking Corvette to run in Class C Grand Touring. In July 2013 Dave blasted the car through the lights at a speed of 198.013 mph to set a new class record of 198.013 mph. Cool as the feat as he was a tad shy of the magical 200 mph mark and gaining entry into the El Mirage Dirty-2 (200 mph) Club. Last month at the June meet he did the deed with a run of 203.818 mph. This shot was taken Sunday morning as the boys were staging their car for the first round of runs (JMC_5513). When we get the results we’ll let you know how the team fared at this meet.

Lakes racers will do almost anything to gain a few added miles per hour. Take Ralph Hudson for instance. He’s seen waiting in staging before his first run Sunday morning with a strange looking addition to his back (JMC_5514). His bike runs in the APS-BG 650 Class (that stands for Special Construction Partial Streamlined Blown Gas powered by a 650cc engine). In June Ralph pushed the record to 183.551 mph. For this meet, We’ll have to wait and see. Note his bent sheet-metal vortex generators attached to the rear of the body to aid streamlining.

We spied this wildly decorated Model-A two-door sedan parked next to the staging area on Sunday (JMC_5516). It was always surrounded by observers trying to read all the sayings written on the body and takes us back to the good old days when So-Cal rodder’s spoofed the dust-bowl Oakie-rides that showed up California in the ’30s.

rodder’s are an independent bunch of rebels. This weekend there was a proliferation of new flags flying at the lakes. I’ve never seen so many Stars and Bars as a kind of silent protest against government intrusion. One wonders how long it will take the BLM before they start telling us racers we can’t fly 150-year-old flags at the lakes.

One never knows what might show up at El Mirage during an S.C.T.A. event. Not far from the inspection areas we spied this chop-top that could have starred in the movie Rebel Without a Cause. This in-progress Chevy 2-door coupe was a real head turner (JMC_5517). It sports a ’46-’47 Olds grill and ’56 headlight rings. Oh yea, it had a big Hop Up logo painted on the trunk lid. Of note are Old Glory and MIA flags in the background.

Decades-old lakes racer Harold Johansen brought his ’27 bodied Modified Roadster out for the July El Mirage meet (JMC_5518). Seems luck just isn’t with the team this year. After wasting a tranny and rear-end the last meet, a clutch let go this time and barely missed the driver’s feet. Yikes!  It’s powered by a Ford Banger with a 16 valve head fitted with mechanical fuel injection.

Early in the week, we received a package in the mail courtesy of Mike Karolchik out of St. Helens, Oregon. Mike said he picked the stuff up ages ago some great old shots were two to die for old Racing Roadster Programs and a Scrapbook of old newspaper clippings from before WWII. Let’s have a look at a couple of them.

First up is the Kenz & Leslie Streamliner on its high end for the day Trailer after traversing the hills from its home in Denver and resting just West of Salt Lake on its way to Wendover (KCH_002). The year is 1951 and the Denver boys set top speed of the meet with a 230.7692 mph run. They also set a Class D Streamliner record of 221.479 after qualifying at 227.848 mph. The baby blue liner was powered by two type 59 FoMoCo blocks, the front one displacing 275″ and the rear one 296″. They also ran it in Class C Streamliner with just the 275″ motor to grab second place behind the Chapel Tornado with a 173.076 mph run. In the background, you can barely see the Deuce Pickup that flat-towed a Deuce Roadster bearing the number 6C on the side and Edelbrock Equipped on the hood.

Then there is this faded print. We see a rare color shot of Marion Lee “Mickey” Thompson’s chopped Bantam coupe at Bonneville in 1952 (KCH_011). The car had two flatheads for power and ran 196.72 mph for first in class and sd s at 194.34 mph.It was originally purple, had one engine and built by Mr. Belly Tank himself, Bill Burke.

Super rare is this program from Ord, Nebraska that featured the Roaring Roadsters (KCH_024). The races were promoted by the Colorado Automobile Racing Club (CARC) and held on July 4-5, 1948. In the book, Valley Country Thunder by Valasek and Mays published way back in 2004 we even found some race results for that weekend’s event. Cool!

Merchants Park was a famous raceway in the Denver area back in the day. This is but one of the numerous clippings out of Mike’s Scrapbook that fills us in on long lost racing history (KCH_088). We like the ‘34 Ford front grill and the fancy looking chrome wheels.

During the week we also tackled some more new shots from our pal Joe Henning. In the early ‘60’s Joe was an Art Director at Petersen Publishing doing tons of work for Rod & Custom Magazine. One of it’s off-shoots was Rod & Custom Models that was also full of his work. This shot shows one of Joe’s scratch-built models from the day on a trailer being pulled by an AMT ‘32 Ford Roadster (JHC_1115).

Not many people know that Henning also promoted races at Bakersfield Speedway and was sucked into the television world. This long lost 8” x 10” print shows two Monogram Indy Car models that ended up touting the area races on the Boob-Tube (JHC_1110).

Among the mix of old shots was this great one of the legendary Rex Mays at Roby Speedway in the Chicago area back in 1936 (JHC_1057). How many of you know that Rex use ti race at Muroc in the early ‘30’s?

While on the subject of racing at Muroc this next shot shows another famous racer who cut his teeth speeding across the dry lake bed at Muroc. We see Jack McGrath lifting a wheel during the ’55 season behind the wheel of the Jack Hinkle Kurtis 4000-Offy JHC_1081).

It’s 2 AM so it’s time to maybe get some sleep after gutting up way too early at El Mirage this morning. 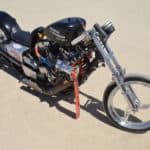 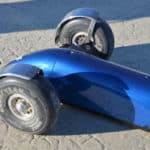 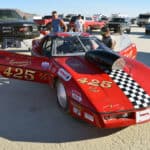 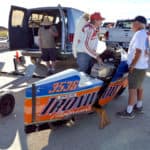 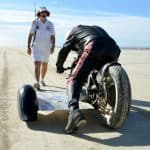 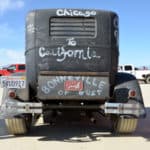 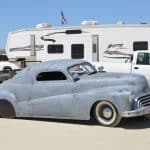 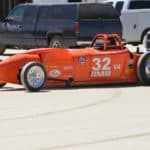 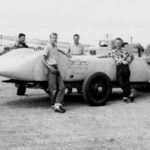 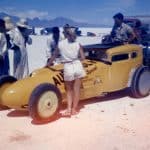 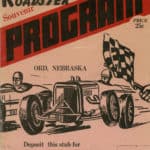 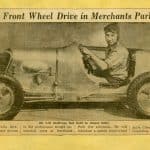 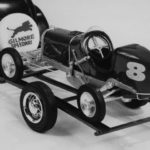 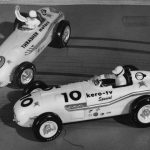 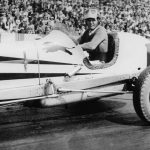 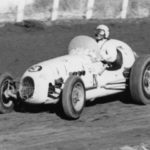