This Saturday we took a little ride out to Fontana for a visit to the little drag strip tucked behind the big raceway that’s best known for hosting Champ Car and NASCAR races. It was billed a Test & Tune for those wanting to debug or just get some seat time in their race cars. It was also a good excuse to find out what the current state of affairs is in the amateur world of dragging.

Doing a reconnaissance lap of the pits I ran into fellow Sidewinder member Don Tubbs and his bud Bob Vacca. They were playing led the M&V Automotive Rollin Rice Bowl III. After finishing a lap of the pits it was time to check out the cars in staging and watch them do burnouts before a blast down the track. Timing was on our side as Bob and Don showed up with the “Ricer” and we got to watch it being prepped for a run. After it fired Bob idled it off to the water trap and that’s when I snapped it for today’s first shot (JMC_5543). This is the first outing after a complete engine rebuild and everything worked like a champ.

While canvassing the staging lines one runs across the familiar rides that you expect to see like our next ditty, Aircraft Eddie’s Dodge complete with slicks and wheelie bars (JMC_5542). So far so good.

What struck me was the amount of newer rides that showed. Take for example this Stang we caught warming up its tires (JMC_5540). Yep, it’s a 2015 model that’s all tricked out. The base price of a stocker 435 hp 5.0 is $36,300 and we bet this one costs even more by the look of the copious amounts of tire smoke. One wonders about the warranty.

What really got us going was all the other newer rides we saw. Take for example what we think is a 2009 Mercedes Benz E 63. One look at the RENNtech tag on the right of the trunk says money pit for sure (JMC_5541). There was also a newer model Merc that made smoke just like this one along with a bunch of Z-cars etc. fitted with wide weenies. What blows you away is that these guys are all street driven. It looks like hi-tech street rodding is alive and well.

To bring it down a notch or two our next offering is from way back in 1946 (JMC_5544). One Edgar Almquist published this Custom Styling Manual that’s full of period information for the budding customizer. He talks about how much body design changed from ‘32 to ‘42 and that you had to be really careful when choosing the right body parts to get a unified look.

Next up is a 1942 Buick after it was customized into an ultra-streamlined job using the Almquist method (JMC_5545). Is it a boat or a bumper car, you be the judge.

While on the styling theme let’s fast forward to 1970 when Chrysler unveiled this wedge-shaped show stopper called the Cordoba de Oro (JHC_1181). The styling team was lead by then chief Elwood Engle and featured a cantilevered roof with almost non-existent A-pillars. It was built on a standard Chrysler chassis with a 124″ wheelbase. The seats were trimmed in gold leather and matched the car’s exterior color (no, it wasn’t Ricardo Montalban “Corinthian Leather”). On the back of the roof was a built-in spoiler that raised automatically. This is a Chrysler-Plymouth Public relations photo from the day.

A few months back we got a giant batch of photos from Joe Henning. In the group, we found five 2” x 2” prints that were taken in 1948. The prints had matching numbers stamped on the back so they were printed at the same time. What was cool was that some were taken at El Mirage and some at Indy. Last week we got another bunch of shots from Joe and lo and behold if we didn’t find about 25 more little shots with the same number stamped on the back. We present the next two images showing a compellation of eight dry lakes shots and eight Indy shots.

JHC_1179 is at the lakes. The first shot shows the Hilborn Lakester, then comes Charles Dimmett’s monster, the So-Cal tank and Marvin Lee’s unpainted Streamliner that ended up on the first Bonneville program cover, all shots that we need to do captions for.

JHC_1180 is at Indy. The first shows the Chevy Pace Car, Ralph Hepburn’s Novi before he crashed it and perished, Ted Horn and Hal Cole. Then Dry Lakes racer Manny Ayulo in Connie Weidel’s Merc flattie homebuilt. And we can’t forget the Merc powered Miller-Ford that Andy Granatelli crashed. We also need to do captions.

Next up is a shot was taken for one of the Petersen Magazines back in ‘66 (JHC_1134). It’s one of 12 shots on an 8” x 10” contact print. The car is the Dean Van Lines Kuzma driven by a youngster named Mario Andretti.

Back at the lakes, we see the Steinegger & Eshenbaugh Class D Fuel Lakester in line waiting to be inspected on Saturday, July 11, 2015, at El Mirage. Al Eshenbaugh, on the left, drove it through the lights on Sunday at a speed of 216.478 mph.

Crew Chief Eddie “Fabio” Marlen gets ready to remove the left side Dzus buttons on the BMR Racing Class C Fuel Roadster during inspection at El Mirage on July 11, 2015 (JMC_5522). The car sailed through tech. On Sunday driver Alan Fogliadini finally had a good run and turned 242.873 mph. On the right in his Desert Storm pants observing is AHRF contributor Mike Littlefield. On the left is the Leggitt-Salkins-Arnold Stude called the “Beast” that went up in flames on Sunday.

This amazing shot captured by Stuart Harnick shows the Leggitt-Salkins-Arnold Class B Classic Blown Fuel Altered making it through the timing lights at El Mirage (SHC_006). Driver Brandon Leggitt grenaded the Hemi V8 about a third of the way through his run and didn’t realize that the car was one hot ride until he managed to stop the car minus it’s burned to a crisp. Brandon coasted through the traps at a speed of 116.330 mph. Needless to say, the team has a lot of work to do rebuilding the car.

We’ve been snowed as of late with new stuff but that doesn’t stop us at the AHRF. We’re working with the Wally Parks NHRA Museum and them with a bunch of Lakes shots for their display cases. Here are a couple to get you fired up and visit the shrine of Hot Rodding.

This Fred Larsen image shows the Class D Roadster that was run by the team of Leonheartt-McMullen-Bank at Bonneville Speedweek in 1955. It posted a top speed of 139.53 mph for 7th in class.

Last up this week is this Timmy Rochlitzer shot taken at Bonneville in 1951 (TRC_010). We see the Xydias & DeLangton tank that was entered in two classes. In Class A the V8-60 powered ride ran 145.395 mph for a first in class. In Class C Lakester they ran 178.217 mph for a second behind Earl Evans’ Speed Equipment Special. The Tank in the background is the Stanford Brothers & Phy B Lakester that ran 160.427 mph for second in class.

One more thing that might interest you, Bonneville has been canceled for the second year in a row. Bummer. 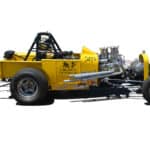 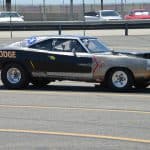 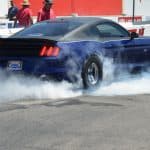 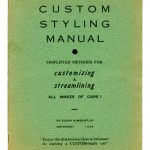 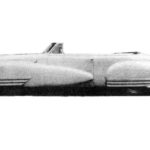 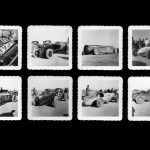 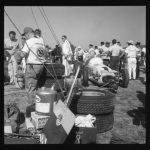 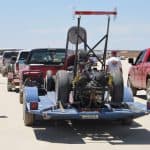 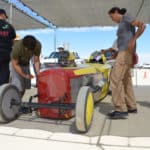 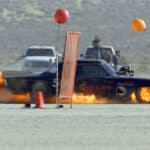 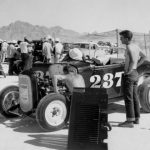 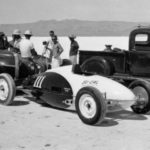