It’s only fitting that we start this week with a souvenir that was done for Speedweek that now languishes in the S.C.T.A. sales trailer. It’s a dash tag featuring Danny Thompson’s Challenger II (JMC_5574). It’s also ironic that the start date for Speedweek is even screwed up on the tag. Could we use the old saying “when it rains it pours”?

Last week we lead off with a drawing of the Larsen-Cummins Modified Roadster. This week we’ll lead off with a photo of the car taken in ‘65 at the salt from Fred’s own collection (FLC_215). You sharpies will note that we picked a shot that was taken 50 years ago as a tribute to some of the folks that were running car’s back then that are still messing with the go fast cars today. The Class A Modified Roadster was powered by a 444″ Supercharged Chrysler and was after it’s own 240.642 mph record set in 1963 with Fred behind the wheel. The unofficial results don’t have a speed listed because o the wet salt conditions. Sound familiar? To put the record in perspective the bottom of Class A today is 440” and the top 500.99” so Fred’s car just squeezed into it. The current A record stands at 307.555 mph and was set back in ‘91 by Jim Howe. When we look at the current B record it was set in ‘06 by Pete Prentice at 253.457 mph. Fred’s 240 record set five decades ago is indeed impressive even today.

One hot push/race truck from Bonneville in 1965 is seen in our next shot (KYC_009). Keith Young was timed at 129.76 mph in this basically stock Chevy pickup back in the day and we still see him once and awhile at the lakes.

A few weeks ago we received a package from Mark Karolchik with some old B-ville shots. What’s cool about this shot is that it was taken in color (KCH_012). There was a light leak that messed up the lower portion of the film but we’ll take it any day. Up front, we see Gordon Potter Class D Modified Roadster that showed up at Bonneville in 1952 and kind of blew the socks off everybody. The number 501 was fairly conventional except for the mill which was one of those new-fangled Chrysler engines they called a Hemi. The 361-incher powered the brick to a speed of 153.51 mph for a fourth in class against the likes of Miller & Taylor and Stecker & Fugatt in their low slung rear engined jobs. A close look to the left in the rear will reveal the Miller & Taylor car in yellow with two circles painted around the nose by Eldon Snapp who designed the S.C.T.A. Winged Wheel logo before WWII.

Along with the B-ville shots were a couple of programs and a scrapbook put together in the Denver area before that WWII conflict. We finished scanning all the images on all the pages and cleaning them up this last week. Naturally, we had to pick a clipping that related to Bonneville so we present one John Cobb’s monster streamliner posing on the salt in 1938 (KCH_052). Cobb would end up driving the 28 foot 8 inch long Reid Railton designed machine to a new Worlds Land Speed Record of 350.20 mph on September 15. The record was short-lived as George Eyston came along the very next day and bumped it to 357.50 mph with his Thunderbolt.

Little known is that both Eyston and Cobb would spend some time in Los Angeles after their Salt Flat adventures. Our next shot from Carroll Photo Service (JHC_891)courtesy of Joe Henning had this caption attached to the back— Luminaries were common at Gilmore during the racing season. In this 1947 photo: Actor Jimmy Dunn, Reid Railton, designer of John Cobb’s land speed record attempt car, Earl B Gilmore stadium owner: (front row) Mrs. Gilmore, John Cobb. Seems our friend Mr. Gilmore was involved with fuel and Oil sponsorship of Mr. Cobb’s ride so it was only natural that they would visit Mr. Gilmore’s little racetrack at Third and Fairfax to take in some Midget Car Racing.

That’s a perfect segway into our next compellation shot (JHC_1238). Last week we mentioned some postcards that Joe Henning purchased for a dime each back in 1949. We scanned all of them during the week and present 30 of them to you. It takes an eagle eye and the knowledge that mufflers were required at Gilmore to help you pick out which shots were taken at the track (eight of them).

Taken around the same time as the above postcards is this historic shot snapped up San Francisco way (DBC_879). We see a dashing Freddie Agabashian behind the wheel of the Burgermeister (Beer) Special owned and wrenched on by one George Bignotti (George in glasses is between the two officials in their striped shirts smiling). The car is a Kurtis-Kraft that was powered by a Ford V8-60.

We always try to connect the dots between various automotive activities and our next image (RBC_088) should connect perfectly with the above shot (DBC_879). We see the cover of the First Annual National (Oakland) Roadster Show program. It features the trophy that is still in use over 55 years after this picture was taken. On the left, we see Miss California 1949, Joan Pedersen. On the right, we see that guy seated in the midget shot, Freddie Agabashian. To solidify our connecting to the hot rod world we got the shot from GNRS luminary, Roy Brizio. It can’t get any better than that.

While we’re at it, here’s another shot of the Fredster taken back in 1952 that we just scanned courtesy of that Henning fellow. After coming to the Speedway back in 1931 and again in 1950 with Diesel powered cars, the Cummins Engineering Company made a super big splash in the newspapers with this ride. The Cummins boys hired Frank Kurtis to build this radical for the day machine that would carry a laid on its side 401” inline 6 Diesel. Driver Fred did his job spectacularly and put the car on the pole with a speed of 138.010 mph. On race day things didn’t go too well as the Supercharger intake which was mounted inside the nose got completely clogged with tire rubber. On lap 71 when the shot was taken, we see it pulling behind the wall and out of the race. He was classified as finishing in 27th.

This Saturday and Sunday the S.C.T.A. put on an event without much notice called the SCTA MILE Speed Weekend that was held at the Mojave Air and Space Port in Mojave, California. We attended and snapped the following shots for you. It will take a few days to get any results so here’s what we know at the moment.

JMC_5570 shows the Big Red Camaro. This cool looking 1969 pony car went 232.4 mph back in April 2014 to set a benchmark speed at the track. Since this is a first-time event for the S.C.T.A. they limited first runs for everybody to 150 mph. This is the tow back to the pits shot after run two and the Red crew was still trying to find a tune for more speed.

One upside to the SCTA MILE was it gave some of the folks who had spent time and money getting their rides to the States before Speedweek was canceled a place to run. The team’s rider from Japan explains some of the details of the Ninja H2R to a member of the media (JMC_5559).

An interesting car we haven’t seen before is this classic looking Deuce roadster that was powered by a GMC inline-6 (JMC_5571). Called the Schellville Special, when a side panel was removed briefly we spied a belt driven blower that stuffed air into its military green painted block and a mag to supply spark. Nothing more is known.

Here’s the coolest ride we spotted at the event (JMC_5573). This one came all the way from Russia and was a mix of art and ingenuity. The engine reminded us of an old old old BMW with exposed pushrods to actuate the two valves for each cylinder. Dig all the CNC bracketry that held everything together. And don’t forget the mini.brakes that look like their off a BMX bike. Best of all is the 2-piece CNC’ed gas tank that screwed together sporting the name Bonny Speed master.  Cool!

I couldn’t resist taking a picture of Dan Warner’s Colorado Tailgate. At Presdog of the Bonneville 200 mph club, one rarely sees it without a coat of salt (JMC_5558). A couple of years back we got some of the leftover wrap off of Wayne Jesel’s B-Ville pickup that ended up adorning Dan’s tailgate. A collision got Dan a new tailgate and when Wayne up-dated his hood with a color-wrap Dan sweet-talked him into this killer graphic.

We couldn’t resist snapping the front fender of this bike to show you the special Inspected Sticker used at the event (JMC_5561). There is even a T-shirt that matches that you can get off the S.C.T.A. website. We have to thank Dan Warner for this one too. He talked Larry Erickson into doing the over the top artwork just like he did back in ‘85 and ‘86 when Larry did the Speedweek Program Covers. What are friends for! 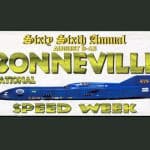 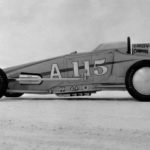 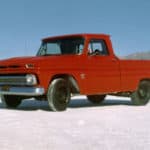 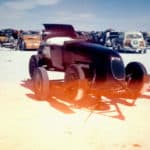 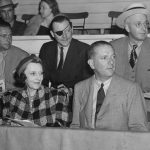 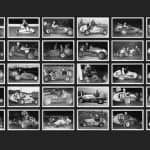 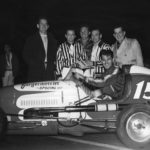 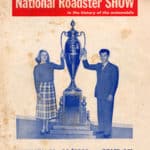 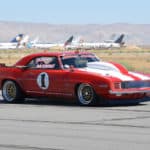 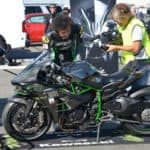 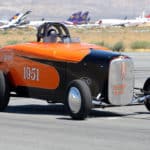 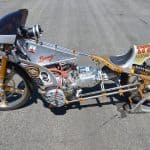 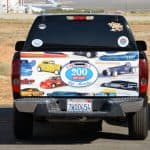 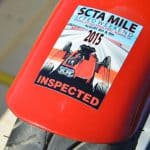