Most of the stuff we do around here is pretty straight forward. Take an image, give it a key number, clean it if necessary, scan it, retouch a few spots, then try and figure out the who, what, where and the when of it. There are exceptions naturally and we were faced with a good one this week. Our challenge was to see if we could save some prints that had stuck themselves together courtesy of some unknown liquid. This is an easy task if you just spilled your soda or coffee on some prints or negs and they are still wet, but in our case, we had to work with some prints that had been stashed away for over 30 years. We had to different kinds of prints to play with so let’s have a look.

First up were some RC (resin coated paper) prints. There were four stuck together. Our first step was to get out our 9” x 12” photo tray and fill it with some warm water. Then we took the stuck together prints and put them in the water. Usually, a couple of hours in the water will do the trick and you can pull them apart (you have to be careful doing this). Naturally, our prints weren’t doing what they were supposed to so we added a little photo-flo (a water_wetter) and kept an eye on them. After two long days, we went to work on them. It took about an hour each to un-stick them from their brethren by literally pulling them apart. We lucked out and managed to save all four prints. If you look closely at JHC_1374 in the upper left you will see the RC paper started to de-laminate itself and after we dried it, it looks pretty nasty.  We went the extra mile to save this copy-print because it was snapped over 100 years ago at the Panama Pacific Exposition’s World’s Fair races in San Francisco. There were two races held during the Expo, one on February 27 called the American Grand Prix and one on March 6th called the Vanderbilt Cup. Up front in Delage wearing number 15 is driver Claude Newhouse. Car number 6 next to him is Glover Ruxtell driving a Mercer. (Ever heard of a Ruxtell two-speed rear end

Joe Henning Collection used on Model T’s? Glover is the one who invented and produced them in his Berkeley, California factory).

Our second image was printed way back in 1925. When found it had had a piece of paper stuck to it that was pulled off after it had dried. We were lucky in that the paper that was ripped off the print didn’t take any of the emulsion with it. Like the RC prints, we put the old print in some water. It took all of five minutes to loosen the stuck paper and we wiped it off the print with our fingers. Some of the emulsion had been damaged too so we had to be extra careful in how we handled the print in the water. We put it in our drier and an hour later it was ready. We cleaned it with our special solution and scanned it. The original print was 4″ high and 8″ wide and since it’s an original we scanned it 10 times larger to try and capture every detail for you. The back of JHC_1370 had a stamp on it dated May 10, 1925. There was also a handwritten note that said April 19, 1925. Confused yet? There was also a printed piece glued on the back that said— Speed in the world’s speed capital. Harry Hartz going into the lead to capture the 50-mile sprint championship at Culver City. (Times Photo by David Mann). To get to the bottom of things it was research time. We know the track is Culver City and in ’25 there was a 250-mile Championship race held on March 1. On April 19th four Heat Races of 25 miles and one Main Event of 50 miles were run. This shot from the Main Event shows the number 6 Miller of Harry Hartz leading. Inside is the number 28 Miller of Leon Duray who was a DNF. On the outside, in the number 3 Miller house-car is Bennett Hill who finished fifth. In the number 12 Duesenberg is Peter DePaolo who finished second. On the inside is Pietro Bordino in his number 22 Fiat. next to him on the outside is Earl Cooper in his number 2 Miller who ended up crashing. Cooper crashed out on the 38th lap of the 40 lap race so this shot judging by the shadows was shot in turn 1 near the end of the race.

For our next image, we dug out a 1986 Bonneville poster that had been folded in half and in half again (JMC_5596). Instead of photographing it, we made four scans, put them together and retouched out the folds for you. The poster was the brainchild of our buddy Dan Warner. Seems a young Art Center student was up at Bonneville in ‘84 sketching cars for competitors to make a little side money. Eagle-eye Dan spotted the talented lad and talked him into doing the 1985 and 1986 Program Cover-Poster artwork. His name was Larry Erickson. Larry went on to gain fame working at General Motors, designing Cadzilla and building one far-out street roadster.

But wait, there’s more. Our silver-tongued Dan approached Larry again this year (2015) and he responded with our next image, the 2015 Bonneville Poster (JMC_2615). This one wasn’t folded but it took six scans and some photoshop to put it together for you. (It’s a secret, so keep it quiet, Larry’s supposed to do the 2016 poster too). We can’t wait.

Back in ‘95, I joined the Sidewinders. It was the coolest thing I’ve ever done because of all the friendships that have been made since then. Along with the friends you also get to get your hands dirty working on race cars and you can’t beat that with a stick. The first one was the Rich Manchen built  Modified Streamline…I mean Sports that started life as an Alfa-Romeo and ended up with a tube chassis and a Blown Big Block. JMC_5616 shows the car at Bonneville in ‘99 after yours truly got to do a couple of laps in the 235 mph range. It was run under the name (Rich) Manchen, (Mike) Manghelli, (Lee) Kennedy with Dan Warner (any of those names familiar?) and me as the crew. Running it was a blast and so was winning the 1997 S.C.T.A. Points Championship. Better yet with Lee driving, the car set a record of 251.261 mph in ‘98 that’s still in the book.

The next adventure and photo from ‘05 by Randy Lorentzen (JMC_5617) revolves around another Sidewinder, Ron Main. Bobby Walden (Walden Speed Shop) was driving the car at Bonneville and rolled it up into a ball. Ron tapped Rich to rebuild it and pretty soon I had a job at the shop. With tandem front wheels and a re-tweaked Flathead put together by Dick Landy, the car became the first Flathead-powered car to set a record over 300 mph, it’s deed was 302.674 mph with Ron driving. A deal with G.M. Performance meant out with the flat motor and in with an EcoTec 4-banger in ‘04 resulted in two records, Blown Fuel at 309.607 mph and Blown Gas at 290.567 mph.

A while back we showed you a picture of the Arnold-Leggett-Salkins Stude cruising through the traps at El Mirage on July 12, 2015, with flames coming out of every opening possible. This shot shows the rebuilt Beast on the starting line on September 13. Driver Brandon Leggett made it farther down the track before the Nitro fueled motor hydrolyzed. A single Mag caused a misfire and the engine grenaded itself for the second meet in a row. Big Block Chrysler’s are expensive to repair.  Note Manchen’s name over the rear wheel.

Manchen was over Friday and we decided to go up to Bakersfield on Saturday to check out some other kind of Nitro burning rides. While cruising the pits we ran into B-Ville and Top Fuel Dragster shoe Rick White in the center. He was happy when we snapped the shot (JMC_5604). By the end of the day, he had lost his smile, waisted two motors and declared the second place finisher. Bummer. LSR racer Russ Eyres on the left was crewing for Rick.

JMC-5605 kinda gives you a look at what Rick sees when he’s behind the wheel.

Manchen seems to know everybody. We stopped off in the Team High-Speed pits before qualifying to do a little jawing. They were getting the engine ready to fire it and had cranked up the box fan for a little clean air (JMC_5606). At the end of the day, they went home the winner of Top Fuel Dragster.

While cruising the pits we spotted this super-sano ride called the Tea Pot T. It was driven by Ron Angalone. Nice headers on the 6-banger and it sounded great too. It ran close to 150 wound tighter than a rubber band.

We see driver Rodney Flournoy flashing us a big smile while the fast cars are paraded by the folks in the grandstand (JMC_5608). We stopped by the Godzilla pits a couple of times. After their first round, we saw a video of the run shot by the camera above his head. They had a mysterious leak between the head and intake manifold that sucked air and screwed up the left bank’s great flames. Worse yet was their new set of Goodyear’s on the rear. Seems they expand more than their last set and decided to rub the inner body wells. The rubbing steered Rodney into the other lane right not so he had to shut off pronto.

It was relax time and sit in the third row of the grandstands. We see the first matchup of the program, Funnycars, with Darkside on the left and Hot 4 Teacher on the right (JMC_5610). For you techies, the ASA was set at 200 on the camera.

Next up we see Darkside doing a burnout (JMC_5609). It was starting to get dark so the 200 and the pan left things a bit bury. It’s time to play around a little bit.

We caught Hot 4 Teacher doing its burnout (MC_5611). Changed the ASA to 1000 for this shot. A little sharper and a little more contrasty. Note the sky is starting to get a little darker.

Darkside and Hot 4 Teacher in staging changing over from Alcohol to Nitro (JMC_5612). The cars were still but the guys were moving. About 30 seconds later they were in the beams and then the starter pushed the button. I did the same to the camera but by the time the auto focus focused the cars were gone and missed the shot.

Everybody had their phones working overtime. The guy in front of me was recording the action but my camera couldn’t read his screen (JMC_5613). The solution, Take one of my shots, lighten it up, distort the perspective to match the phone’s, photoshop it onto his phone and trick you all into thinking the shot is real.

Last shot for the story. Changed the ASA to 4000 as it’s gotten really dark outside. The green line in the shot is actually the go light on the Christmas Tree (JMC_5614. It’s hard to pan a camera at the same speed as the car, especially when it’s accelerating from a dead stop. This time I was lucky and got one right. Can even read the web address on the side of the car and the writing under the flaming headers. 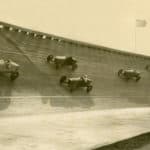 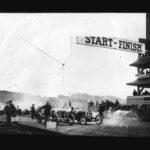 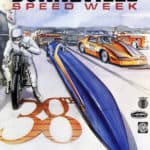 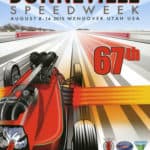 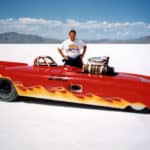 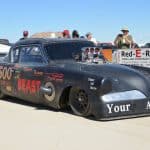 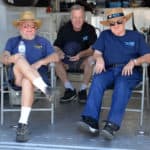 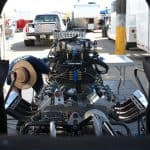 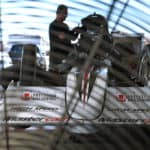 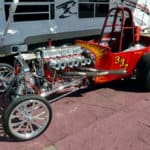 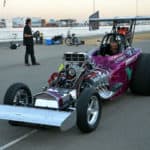 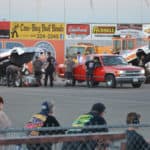 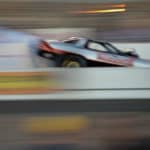 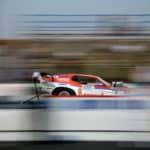 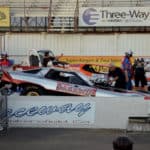 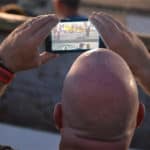 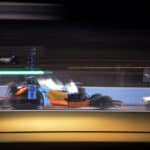 Previous Post: « Thank God for Weekends
Next Post: From Dirt to making history at a Ball Park »
↑ Top of Page