We ran into the folks from Hemming’s Motor News at the Race of Gentlemen a couple of weeks ago. The did a splash in their magazine a while ago on the AHRF so it was only fair to give them a hand when they called early in the week about some early info on Isky’s T Roadster.

To add a little spice to what we already knew about the car it was time for a road trip down to the weekly lunch and ask John Athan some questions about the car he originally built and sold to Ed over 75 years ago.

Since we deal in pictures and dig out a shot of the car to show John at lunch (ATH_001). He took one look at the shot and it was like he was transported back to 1938. Behind the wheel of the car is neighbor Eddie Baltz in John’s parents’ driveway at 2404 Hillcrest Drive in Los Angeles. It was a real mish-mash of parts that John assembled to create version one of this iconic roadster. The car rides on Essex frame rails and is powered by a Ford Model T banger with a Rajo BB head and fed by a single Windfield downdraft. John went on to relate that it originally had a Franklin front axle with welded on tabs broke on a trip up to Muroc. It was swapped out for a Ford unit and at the same time, John dumped the T steering box and installed a Franklin unit. The exhaust was off a Legion Ascot ride that he modified to clear his side mounted hand pump. The rear had been fitted with Z irons and a T rear end. At this point in time, the wheels and tires were borrowed, as John didn’t have the money to buy any. Later he would hunt up some Kelsey rims for $3 each. Being the good rodder that he was it didn’t take him too long to break the stock crank racing one of his buddies. Being over six feet tall didn’t leave John much room in the bucket so he decided to build a more spacious ride and sold the now non-running car to his longtime friend Ed Iskendarian. His asking price was $25. After a few more years of work, it morphed into Ed’s June ’48 Hot Rod magazine cover car that he still owns today.

Fast forward to 1943 and we see John and Ed in our next shot (ATH_014). John had a little shop called Mercury Tool and Die about three blocks from where this shot was taken. Ed was home on leave from the Army Air Corp$25. After a few more years of work, it morphed into Ed’s June ’48 Hot Rod magazine cover car that he still owns today.

Fast forward to 1943 and we see John and s and had to take his car for a spin. The car had a 21 stud flat motor in it as it does today running Maxi Heads and one piece valve covers that John made the patterns for and carved Iskendarian into way back when. If you look at the previous shot you will note that the Essex rails had a support piece on the bottom of them. These were cut off and the material was used to form the cross member that supports the front cross spring. Our boys were indeed frugal. In the background on the left is the notorious “Toddle House” located at 5963 Washington Boulevard in Culver City. For you trivia folks King’s Tropical Inn was down the street and Fatty Arbuckle’s even more notorious “Plantation” was up the street.

Our friends at Hemming’s automatically assumed that most of the rods in our part of the world (California) were Ford based and of the cross spring variety like seen in our next shot (CKC_1926). This one was taken at San Jose showing some roadsters set up for a little racing. Up front we have a Ford Model T sans fenders, hood and doors to shed some weight. It sports an after market head with the exhaust exiting on the driver side. The intake wears a Winfield. Note the front spring have turned up ends and mounts to an after market cross-bar bolted to the chassis. The Model A behind it also looks race ready even though it’s wearing a  is wearing a ’33 California plate. It sports after market wires and has lost its windshield. In the right rear is a stripped down ’29 A  waiting for you to climb aboard.

We just had to dig out a few shots to set the record a little straighter. First up is this snap of Dave Oliver that was taken at San Jose Speedway back in 1933  in his three springer (two in front, one in the rear) (CKC_1571). We don’t know anything about Dave or his ride. The grill shell and hood looks like it’s from a ’28 or so Chrysler. The wheels and caps and the rear radius rods are Ford.

Our next victim is Elmer Collins who’s also spied at San Jose in his ( ’28 or so Chrysler. The wheels and caps and the rear four springer) ’27 Chevrolet stripped down for some racing (CKC_1545). Anybody have a clue as to what the grill-shell’s donor car was?

Our next shot is also a Chevy based (four springer) car that was driven by Al Chasteen (CKC_1542). We like the ‘34 Ford grill and the streamlined cowl. If you look real close you will note the car is running Ford hubcaps so the car might had a Ford front axle and rear end installed. We’ve also seen a lot of these early Chevies running Chrysler tube axles up front also. Not so well known is that Chevy rear ends were used extensively around this time, especially on track jobs. They had a pumpkin rear end so changing rear end gears was a snap, unlike the Ford unit. Another little secret was that Model A ring and pinions were an easy swap into a Chevy housing and a lot of guys used a spool instead of an open rear end. The man on the left is possibly hot shoe driver Buck Whitmer.

Henry Funk brought his old Legion and Southern Ascot car to Muroc on September 28, 1941 to see what she would do. Sadly the programs we have on the event don’t list any speeds. Henry ran in the Streamliner class because the car had a tail on it. Check put the bald front tires and the interesting rear grove job. You will note that Henry’s car has cross springs (a two springer) and there is a good reason that race cars evolved into this configuration. Just suppose you’re going into turn one and get a little high and end up whacking the wall. What happens is that one chassis rail usually takes the hit and moves itself out of alignment with the opposite side’s rail. Straightening this involves basically taking the car complete apart. Oh, did we mention that the solid engine mounts would bend or even worse, transfer the load into the engine block and break it. Those little hairpin that evolved on two springers would eat up the energy.

Not all the cool looking cars at the lakes were racers. Take for example this great looking 1932 Ford three-window coupe that belonged to an unknown spectator. n unknIt was snapped at El Mirage back in 1946. We tried to narrow down when it was shot by using the number 147 roadster in the rear. Only problem is three cars used that number during the season, B. G. Casper in June, Jack Rymer in July and Mel Straw in September.

Cars at the lakes were getting slipperier all the time. This shot of Sidewinders member Roy Siegner’s Class B Roadster was snapped during the 1949 season (DBC_556). The ’27 T body hides a 239″ ’46 Merc power plant fitted with Edelbrock heads, Navarro intake, Windfield can and Kong ignition. Roy entered the first two meet in May and June but didn’t show. For July and September and October he was entered but he was out of the top 15 in class so no speeds are known.

The Spalding Brothers took their Track Roadster up to the lakes for the September 24, 1949 meet to do some shakedown runs (DBC_056). The car featured a ‘25 T Roadster body, torsion bar suspension, an Art Ingles nose and cast grill insert and a Wayne 12 port Chevy setup fed by  by up fed by no less that six carbs atop a 248” ‘48 Chevy inline 6. The Pasadena Roadster Club members amazed everyone by setting a new class record of 146.10 mph. So much for the test run.

On Saturday David Steele and I went for a little ride in his red Roadster Pickup. Seems the Pasadena Roadster Club boys were going to cruise out to Brackett Field in Pomona for breakfast. JMC_5725 shows some of the boys meeting up before the ride commenced. David lead the parade as Tom Branch in his slick Deuce roadster tucked in behind and the others followed suit (JMC_5726). There is nothing like a group of hot rods to grab your attention. JMC_5727 shows some cool rides exiting the freeway in this passenger seat view. Rumble, Rumble. On the right we pass the empty grandstands of the home of the Wintenationals (JMC_5729). Two minutes later a hoard of hot rods invade the parking lot at the airfield and the drivers and passengers headed inside to eat (JMC_5729). Last up is a compilation of some of the players in the breakfast ride (JMC_5742). We call it way cool. 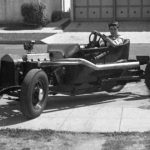 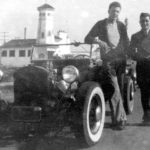 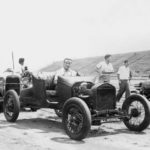 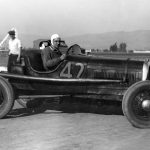 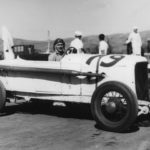 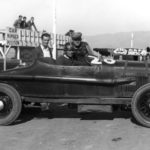 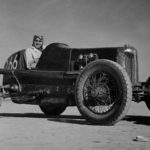 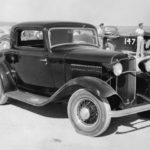 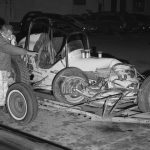 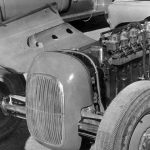 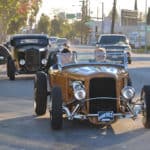 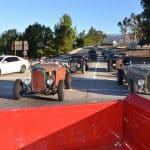 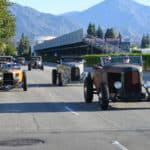 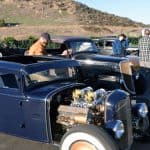 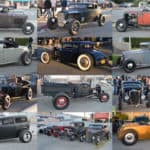