After recouping from a busy last weekend it was time to get serious about picking some shots from the way-to-many taken and then adding some verbiage to them for you. We also got to relax by scanning almost 50 Autograph Cards picked up in Pomona. Along the way, we scanned another 100 or so old newspaper clippings and odds and ends. That probably accounts for the numb rear end from sitting too long.

As usual, we walked around the pits trying to stay out of the way of the worker bees on the cars.   start by having a look at a few drag race shots.

This shot was taken before Round 2 of Top Alcohol Funny Car Qualifying on Friday the 13, 2015 at the Auto Club Finals (JMC_5863). We’re in the pits of the number 729 ’09 Chevy Monte Carlo driven by Nicholas Januil out of Las Vegas. In the background, you can see the crew hard at work on the BAE 521 powered ride. Nick has ended up 11th of 21 drivers in the first round of Qualifying on Thursday with a speed of 235.80 mph in 5.640 seconds. After round 2 had finished he had slid down to 13th to match the Friday date. At the end of Round 3 of qualifying on Saturday Nick had upped his speed to 242.28 mph but wasn’t any quicker ET wise and slipped to bubble spot number 16. In the 1st Round of Eliminations on Saturday afternoon Nick faced off with John Lombardo. Nick was holding his own at the 60-foot mark then John pulled ahead. Nick’s engine expired on the top end so he lost. Lombardo won with a 271.73 mph in 5.467 seconds to Nick’s 222.33 mph in 5.767 seconds.

Up the lane and around the corner from Nicholas was our next stop, the American Ethanol/Novozymes’ pit stall (JMC_5864). Derik Cramer was originally slated to drive this 2015 Dodge Dart but plans changed as he was off “Fencing” so Richie Stevens ended up as the shoe. Richie just happens to be hubby to the number one girl in the class, Erica Enders-Stevens. Under the missing hood we’re looking at a Mopar 500 engine with green valve covers that match the car’s paint job. It’s seen resting between Round 1 and Round 2 of Qualifying on Friday. At the end of Round 1, Richie was down in 16th with a speed of 106.32 mph because he had to depress the clutch before he wanted to. In Round 2 hid did better at 211.00 mph and landed in 13th. Third round on Saturday morning found him still in 13th with a 6.560-second run. At the end of four rounds of Qualifying, he was in the 16 car show. In Round 1 of Eliminations, he faced off with Drew Skillman. Richie red-lighted by .010 and that was the end of his show.

We were heading over to the staging area just as the Pro Stock Motorcycles decided to do the same so we stopped and snapped a few shots of them managing not to get run over. Next up is Kalle Lyren on his bright green Lyren Motorsports ’14 Suzuki powered by a GS 107 that’s being pushed toward pre-stage before Round 2 Qualifying (JMC_5862). 26 bikes were after 12 starting spots and at the end of Round 1 Kalle hadn’t made the cut and was down in 17th with a s and was down in inwn inwn inpeed of 191.02 mph in 6.983 seconds. At the end of Round 2 he had dropped a spot to 18th. On Saturday after Round 3 he had slipped to 19th with a run of 192.41 mph in 7.004 seconds. After last round Qualifying was finished on Saturday our man was still in 19th and missed the show. Pomona was a long way from his home in Surahammar, Sweden. Bummer.

After runs most of the cars return to the pit area under the grandstands. We found a spot where nobody could get in the way and snapped Del Worsham’s DHL sponsored ’15 Camry on the tow-strap after complete Round 2 of Qualifying on Friday afternoon around 4:30 (JMC_5868). Earlier in the day (Round 1) Del had overpowered the track at the 330 ft. light and coasted through at 94.20 mph in 6.915 seconds to end up 16th of the 20 cars entered. After this run he was sitting pretty in 7th wi7th with a speed of 324.05 mph in 3.974 seconds. After Round 3 of Qualifying on Saturday, he was even happier, being 4th with a quicker 3.941-second run. After the last qual session on Saturday, he was up to 3rd with a speed of 326.32 mph in 3.896 seconds. In Eliminations on Sunday he waxed Tony Pedregon in round 1 and Robert Hight in round 2. In Round 3 Del faced off with Jack Beckman and won with a run of 327.35 mph in 3.928 seconds to Jack’s 324.83 mph, 4.088-second run. Drum roll time. In the final round, Del faced Tommy Johnson Jr. in his Make A Wish Charger. We’re guessing that Tommy didn’t wish hard enough for Del came home the winner for the 13th time in Funny Car with a 328.14 mph run in 3.900 seconds to Tommy’s 305.42 mph 4.023 second run. Did we mention Del became the 2015 Funny car Champion too. Do you think it has anything to do with him stopping to pose for us on Friday and us wishing him a Win?

After being on our feet all day we headed up to the grandstands for a sit. That didn’t last long as when cars run down the track we have to catch them for you (JMC_5875). Talk about a close race. Jason Line in the near lane in his Summit Racing Equipment ’15 Camaro takes on Shane Gray in his Gray Manufacturing Tech ’15 Camaro in the far one. Both are powered by GM 500 engines. Jason ran 212.79 mph and Shane ran 212.79 mph. As for the times, Mr. Line cut a 6.521 light and Shane nipped him with a 6.509. Wow! Even try catching two cars in the same image, it’s called luck.

Up front, we mentioned Autograph Cards (JMC_5846). It was go crazy time trying to snag them until we ran into Top Fuel Dragster driver Jenna Haddock (we even got her autograph) enough said. Here are the results.

Let’s shift gears to and look at some odds and ends pieces found in a scrapbook we’ve almost finished scanning.

First up is this cool drawing from a Veedol Motor Oil Ad that appeared in Life Magazine back in 1950 (CKC_2305). We’re looking at a Kurtis Kraft Sports Car. Frank ended up selling the whole S.C. projeccarrera Pan America.

t to Earl “Mad Man” Muntz. It wasn’t dated but was in the same issue that covered the Mexican Road Race.

Our next find consists of an issue of Speed that was actually a program from the Motordrome in San Francisco (CKC_2336). It wasn’t dated but inside it listed NCMA (we think it stands for Northern California Midget Association) standings as of June 7, 1938. The illustration is of Lloyd Logan a more than gifted driver. Inside was a listing of car numbers, drivers, owners and sponsors etc. that made our day.

Here is one of the many clippings we just scanned from 1950 that full of cool trivia (CKC_2323).  If the caption is to small for you to read, here’s what it says— Railbirds at the 500-mile track get a look at the Tom Sarafoff Special, with driver Cliff Griffith at the wheel. This is the car that has only one more chance to make the qualification grade and a spot in the 33 starters May 30. It had made two attempts, being pulled off on the first because of low speed and stopped on the second because of badly worn tires.  We dug into our records to find that Cliff did indeed make a third run in the Sarafoff car. He ran 129.014 mph that was to slow to make the show but was First Alternate for the record.

A few months back we scanned around 700 shots from our buddy Henning. Our next shot is one of about 30 2′ x 2′ prints printed at the same time back in 1948 (JHC_253). We’re looking at the tail of the same car that featured in the above clipping entered by the same Tom Sarafoff only two years earlier. The car was driven by Louis Tomei and was also not fast enough to make the race.

Now it’s time to show you some El Mirage dirtbag shots thanks to all the silt still lodged in one’s ears.

Rich Manchen originally built this slick car a few years back with yours truly as a helper. Fred Blanchard bought it and has been hard at work turning it into the jewel that it is today (JMC_5856). Fred gets ready to nail the accelerator in the cab of his pickup as driver Ben York creates a little black smoke between blipss of the throttle in the cabin of the race car. The Blanchard Bacik York Class B Blown Gas Lakester running an Arias Hemi-Chevy was off the truck’s bumper moments later and on it’s way to a 240.939 mph run against the 250.943 record. Ben did a great great job in not the best of weather conditions.

Dennis Piranio, seen through the driver’s side door window, brought his Class V4 Vintage Gas Altered all the way from Texas to have a little fun with at the last S.C.T.A. event of the 2015 season JMC_5847). Driver Craig Ardon, seen in the middle of the car, made a lap at 114.314 mph against a record of 155.353 mph in the old Ford Banger powered Model A Coupe.

Milers member Alan Fogliadini was just buckled into the BMR Racing Class C Fuel Roadster at El Mirage and we couldn’t resist shooting him (JMC_5857). The Ferguson-Ardun powered ride ran a credible 245.585 mph lap on the 250.600 mph record that Alan set in the car back in June 2011. Nothing is easy on the dirt especially with a 15 mph crosswind.

No, Derek McLeish wasn’t sneaking a beer to the starting line in his cooler at the November El Mirage meet. Hidden inside it was a starter motor that he plugged into the side of his Class APS-BG 125cc Honda. Derek, on his knees, just after the start-up wings the throttle while rider Ralph Leclercq waits for the “fire drill” and for the dust to clear. It was worth it as he rode the bike through the lights at a speed of 129.212 mph for a new record, eclipsing the old one by 7.884 mph. That’s huge for a bike that small.

Last up is this shot that shows you why we love El Mirage and Dirt (not) (JMC_5860).  Super Fours member Larry Madole made a run in this car on Sar on Saturday and turned 85.476 mph against the existing record of 114.644 mph. Not satisfied with the tune-up he was back in line for another try on Sunday in the Ford 4-banger powered Class V4F Vintage Gas Coupe. As you can see there was a little problem with the wind and a thing called visibility so he didn’t get his second chance. Super Bummer. 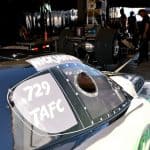 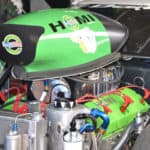 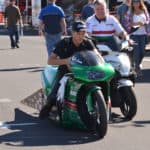 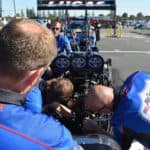 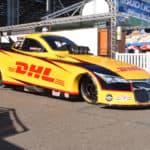 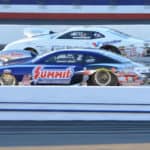 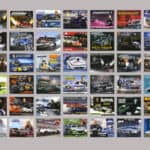 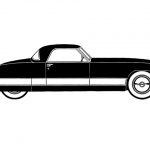 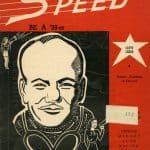 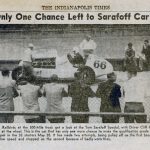 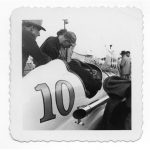 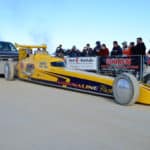 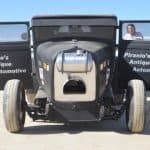 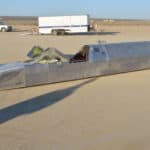 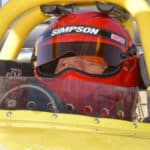 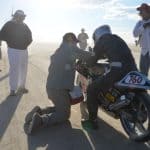 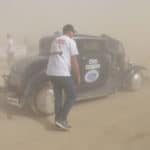 Previous Post: « Ready for some Rest
Next Post: A New Body almost in time to Gobble »
↑ Top of Page