The hardest part of doing what we do at the Foundation is the loss of a friend. We got word early in the week that Bill Burke passed away. This one really hurts. Growing up with the car magazines it was well what’s Bill gonna show up with this year at Bonneville. Then it was goofing off with the man himself for a decade and a half on the salt. There was never a dull moment with Bill around.

Our man was always a car nut. If you pull out your copy of the Throttle Magazine book you’ll find that Bill was a player in the Western Timing Association. Then after WWII, he gave us the first Belly Tank Streamliner/Lakester and a gazillion other innovative race machines. Have a gander at JMC_5891 to see what we mean. In the upper left is his first tank, a front-engined missile. His second tank in the center was still front engined but it’s larger size left him tons of room inside set the stage for the classic lakes racecar. Row two shows it after acquiring the name “Sweet 16”. In the center of row two was the Bantam coupe he would later pawn off on a young kid called Mickey Thompson. To it’s right was his first Liner that was powered by a Harley. It even sported a fiberglass body. The third row starts out with his Sonny’s Muffler car. The story goes that he borrowed his boss’ (Pete Petersen) Cisitalia for a short time and splashed a mold off it to create his own version of the classic Batista Pinin Farina design. The yellow bomb in the center was another bike engined marvel that graced the cover of Hot Rod in January ‘60. For his next act and the last image in this group was his “Golden Commode”. Ponder the name for a moment and you’ll start laughing. With a Bill Stroppe prepped Falcon 6 Mr. B. gained entry into the fabled B-ville 2-Club.

Continuing the story in JMC_5892 the Burkster’s yellow Friendly Cherokee only ran 34 mph over the existing record before the engine destroyed itself in ‘62. We don’t talk about the ill-fated number 88 even though it made the June ‘65 Hot Rod magazine cover. The funny looking Vette on the right into the fabled B-ville 2-Club.

Continuing the story in JMC_5892 the Burkster’s yellow Friendley Cherokee only ran 34 mph over the existing record before the engine destroyed itself in ‘62. We don’t talk about the ill-fated number 88 even though it made the June ‘65 Hot Rod magazine cover. The funny looking Vette on the right light in the top row sports another one of Bill’s wildly colored rides. His color of choice for years was Burple. Yep, that’s a mixture of blue and purple. Center-left we see Bill and his son Steve enjoying the sun at the salt. The center car started life as a Fiberfab Ford GT while the liner on the right has a typical Bill odd shape. Bottom left is his Dollar car, a Studie Avanti that set many a record. In the center is his and his son’s Burple first-gen Mazda RX7. Last but not least is how we all remember the man, a giant smile on the face. RIP my friend.

On Tuesday around noon, David Steele called and said we needed to deliver some shots post-haste to a production company for a documentary in the works on the Race of Gentlemen and the Oilers Car/MC Club. The most famous Oiler was Jim Nelson and we just happened to have a shot of him back in the day at the Paradise Mesa Drag Strip. Here it is for your approval (DCC_407). In the same batch of shots taken by Don Cox was the beginning of an Oiler’s Tub (DCC-118). We also just happened to have this cool color shot by Don showing a few of the Carlsbad, California Oilers have a little impromptu get together not far from the beach back in the late ’40s (DCC_260). The car up front picture taker Don’s ride. Note the chopped ’40 Ford in the rear. Sweet!

We mentioned the Race of Gentlemen. In our next shot (JMC_5893) maybe the name should be changed to the Race of Ladies. Up front is Lisa English in the number 603 A-V8 whose having a chat with Erin Crocker Evernham who drove the number 22 gold T-V8 on the left. The dude on the right is getting it all on tape. Is it just a co-incidence that Erin’s hubby Ray “former NASCAR team owner” Evernham is doing the documentary on the Gentlemen/Oilers, Nah.

One of the wilder rides that showed up at the Race Of Gentlemen in 2015 was Matt Picaro’s ’27 Chevy based creation (JMC_5891). Based in Cream Ridge, New Jersey, Matt’s ride had a Riley 2-Port head bolted on a Ford Banger hidden under the hood. Dig those red clincher rims.

A great mix of “Outlaws” showed up for the 2015 edition of the “Race Of Gentlemen”. Amongst them were a gaggle of oldie but goody motorcycles that blended with the cars perfectly (JMC_5901). Number 13 up front is a 1942 Harley owned by Mark Perego who came all the way from Gagetown, New Brunswick, Canada to strut his stuff.

The sleeper-car of the 2015 Race Of Gentlemen in our eyes had to be long-time rodder Tom McIntire’s Deuce 3-window. (JMC_5902)Based in Burbank, California, Tom ended up finishing in second place in the V8-engined class against Jim Laughlin’s Speedster that powered by a fuel burning 239″ flattie. Tom runs a 241″ flat motor. On the left is “Flash” Dowers freshly primered ’28 Ford Roadster Pickup that sported a 265″ flat motor. Flash came all the way from Boston, Mass. Note his cool Hallock inspired windshield and stylin number 7.

Last week we showed you Vol. 1, No. 1 of R&C Models. Our next shot (JMC_5899) goes hand in hand with the late ’50s to ‘60’s model car boom. Some of these cars were originally made by a company called Best before Aurora came along, acquired and then re-packaged them. In the top row left is Gaston Chevrolet’s 1920 Indy winning Monroe Fronty. In the middle is the Bowes Seal Fast Special that Louis Schneider won the 1931 Indianapolis 500 in. Myron Stevens built the real car. On the right is the Gilmore Speedway Special that Kelly Petillo won the 1935 Indianapolis 500 in. The real ride was built by Curley Wetteroth and was the first Offenhauser powered car to win the race. On the bottom row left is the Iron Mike Boyle Special that Wee Wilbur Shaw won the 1939 and 1940 Indianapolis 500 in. It supposed to be a Maserati 8CTF. Last but not least is the Fuel Injection Engineering Special that Billy Vukovich won the 1953 and 1954 Indianapolis 500 in. It was put together by some guy named Frank Kurtis and a bunch of California hot rodders. These things are tacky by today’s standards but back in ‘58, they were pretty cool. We have to thank Gordon, Carmen and Gary Schroeder for saving them all these years.

Volume 10, Number 2 of Rod & Custom Magazine from 1962. As you can see on the cover Model Cars were all the rage and so was dreaming out of the box (JMC_5900). Take for example Ed “Big Daddy” Roth’s latest creation, Rotar, a vehicle that rode on a cushion of air. For racers, inside were six pages on the ’61 Winternational that took place in Pomona. Also inside was our next image.

Our favorite trouble maker Joe Henning did this cool illustration appeared in the June 1962 issue above (JHC_1312). The real car was also featured inside and was owned by Gary Decker of Wichita, Kansas.  Gary, with the help of Al Williams built the impressive ride. The tube framed car scooted to a speed of 157 mph in 9.95 seconds courtesy of a ’57 Chrysler hogged out to 426″. Speedy “Speedway” Bill was responsible for the white lacquered Austin-Bantam fiberglass body. Wheelies anybody?

David Steele and I also spent a few days in Nashville this week working on upgrading the Foundation. We also discovered that our website had crashed on Thursday. Later that afternoon it was up and somewhat running again. Ah, the joys of the electronic world.

Before heading back to L.A. we stopped off at the Lane Motor Museum for a super short visit. If you’re a diehard car nut his place has got to go on your must-visit list. We even got to check out the stored rides not on display and were blown away. In the farthest corner of the basement, we were shown a real gem, the original BRE 510.

You’re probably scratching your head saying what’s a BRE 510?  Well, BRE stands for Brock Racing Enterprises, like in Peter Brock who penned the Shelby Daytona Coupe among other classics. 510 is the model number for Datsun’s (now known as Nissan) killer little coupe/sedan that became the scourge of SCCA production car racing in the early ’70s. Yours truly just happened to be on a U2 Trans-Am circuit when Pete first showed up with his ‘510’s. In ‘71 during a Testing session at Riverside International Raceway JMC_2509 was snapped alongside the infield garages. This is the very same car that now resides in the basement at the Lane. It’s Deja Vu time.

Even better is our next shot (JMC_2510). Pto be on a U2 Trans-Am circuit when Pete first showed up with his ‘510’s. In ‘71 during a Testing session at Riverside International Raceway JMC_2509 was snapped alongside the infield garages. This is the very same car that now resides in the basement at the Lane. It’s Deja Vu time.

Even better is our next shot (JMC_2510). P0). Posing going into the exit of Turn 9 at Riverside International Raceway with their U2 Trans-Am Rides are from left, Don Pike and the number 69 Gregory Racing BMW 2002, Horst Queck with his team-mate Bert Everett’s Alfa Romeo GTV Veloce and John Morton with the original BRE Datsun 510. The boys had gathered for a test day at the track and also a possible cover shot for Road & Track Magazine who did a story on the cars. Another shot was chosen but they made the cover. Cool. 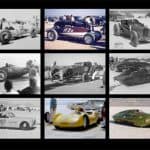 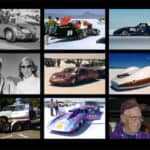 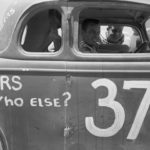 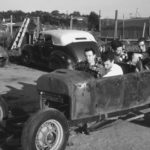 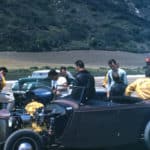 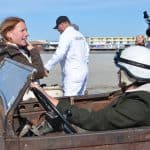 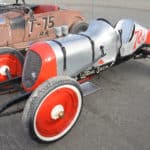 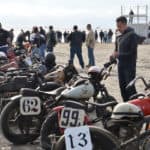 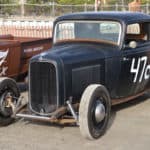 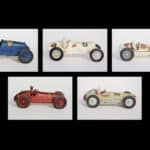 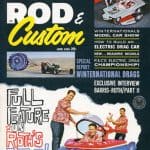 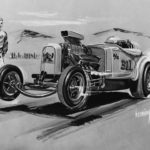 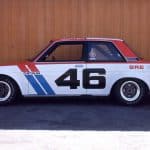 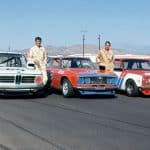 Previous Post: « A New Body almost in time to Gobble
Next Post: Here’s to Friends »
↑ Top of Page