It seems like every weekend this past year had us booked doing something cool. And that’s not counting the umpteen thousands of new goodies that came across our desk for archiving and identification. We’ve grabbed one shot from each month’s adventures to give you a little recap and next week we’ll do the same on our scans from the year. Sit back, grab some hot chocolate (an additive such as Bailey’s makes it even better) and enjoy the ride.

In January the big deal was the Grand National Roadster Show. JMC_5910 was a head-turner in white. Maybe it will be finished this year.

In February the Winternationals reared it’s head so we had to go. JMC_5911 shows the Force Team’s forgotten man, Robert Hight.

We didn’t get any April Showers but we did capture this glass bodied Deuce cruising Bob’s Big Boy with open headers (JMC_5913).

May was a letdown for the dirt racers at El Mirage as Mother nature deposited so rain on the track. Thank Thank. Thank of the World’s Fastest Indian built with brand new Indian components.

We didn’t get any April Showers but we did capture this glass bodied Deuce cruising Bob’s Big Boy with open headers (JMC_5913).

May was a letdown for the dirt racers at El Mirage as Mother nature deposited so rain on the track. Thanks to our bud Dan Warner the Pres Dog of the famous Bonneville 200 mph Club we got to hang out at the Justice Brothers Museum and ogle at Charlie Allen’s pre-war racer (JMC_5468).

In June we flew off to Loveland, Colorado via Montana thanks to a nasty rain storm. The show was a hit and we met some great folks and shot some great cars (JMC_5456).

For July we celebrated the 4th and got in a race at El Mirage. JMC_5914 shows one of Jack Costella’s rad rides before a run.

Bonneville was a washout in August so a hastily arranged meet was held at the Mojave Spaceport. JMC_5915 shows the old Deuce Factory ‘32 coupe alive and well and running again.

In September we took in a big car show and cruise at the Orange County fairgrounds. JMC_5916 shows my shadow adjusting the front brake with the camera. By moving about a foot to the right solved the problem.

Another rainout at El Mirage in October was in the cards. So was the postponement by a week of the Race of Gentlemen thanks to a storm. JMC_5917 shows our pal Dennis Varni buzzing his banger on what’s left of the New Jersey sand.

November brought us back to Pomona for the last NHRA Championship drags of the year. Del Worsham stopped to pose for us and went on to become 2015 Funny Car Champion (JMC_5918).

December brought us the Mooneyes Christmas Party at Irwindale. The Moon boys always put on a great show and even conjured up perfect weather for the Saturday bash. JMC_5919 shows us one way to get back to the pits after a run.

Last up is a banger-powered Model A from around 1935 that we stuck in a garage from around the same period (EMA_014). The wreath was snapped last weekend to get you in the mood.

All of us at the American Hot Rod Foundation wish you a great big Merry Christmas. 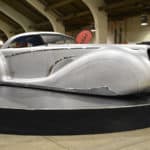 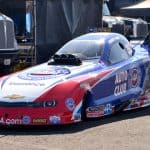 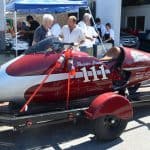 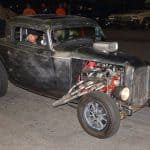 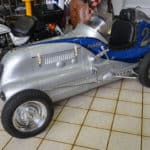 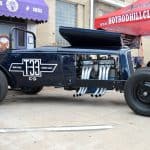 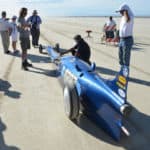 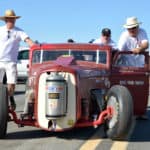 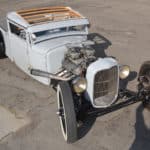 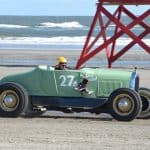 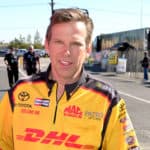 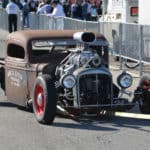 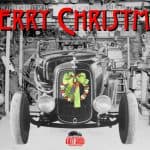