As I sit here pushing buttons on the keyboard I keep asking myself where did the year go. It’s not like someone came in and walked off with thirty or sixty days, it just seems like time vanishes when you get caught up with the zillions of the cool pictures and goodies that we get to re-discover and the cool people we get to meet.

And. if we’re really lucky our New Years wish of a website that works all the time will come true. Thanks for hanging in there.

On Christmas eve it was off to Donovan Engineering for their Annual Holiday Party. I ended up chatting with David Ward for a while and then he disappeared. Quicker than a nano-second. Anyhow, it seems David’s Grandpa was Harvey Ward, the Chief Mechanic on Kelly Petillo’s ‘35 Indy-winning machine to name just one of his accomplishments. When we popped the CD  into the computer it was blown away time. Here’s one of the shots (WFC_040) for your approval. This T-based speedster pre-dates Gow Jobs by a good decade and is the epitome of a cool hill climber. All we can say is it’s cool. That’s a 1940 Chevy Coupe in the background according to the hubcap so the shot was most likely taken before WWII. Herman joins the large group of rodders that we have no info on. Anybody have a clue?

This double exposure shows Pasadena Roadster Club member Bob Woodall in line waiting to run at El Mirage back on November 3, 1946. A 21 stud flattie powered the channeled car to a speed of 53.37 mph. Ouch. From another shot taken at this meet, we found the number on the Deuce in front of Bob’s car. The roadster belonged to Albata member Del Baxter. He ran 98.04 mph. Del went on to run a kick-butt track roadster driven by a young Troy Ruttman among others. This shot is one of many from my old friend Julian Doty.

At last year’s Grand National Roadster Show we were hooked up with Phil Lyons. He just happened to of been at Bonneville with a camera in 1950 so enjoy the shot courtesy of him (PLC_054). We see Lynn Yakel’s nicely modified street machine that made the trip to the salt to see how fast it would run. (Lynn would go on to design Fred Larsen’s Mooneye’s Streamliner among others). The Montebello, California resident had a 296” ‘39 Merc under the hood that said you have to run in Class C Modified Coupe. At week’s end, Lynn had buzzed his ride through the lights at a speed of 128.020 mph and gained himself a second in class. Behind the Deuce is Tom Cobbs’ famous Class C Modified Coupe that was powered by a supercharged 248” Merc. Tom ended up running 109.090 mph to take sixth in class. On the left, we see the nose of the number 90 Class C Lakester of Mays & Henry. It ended up running 149.250 mph for a fifth in class. This car would end up in Leroy Newmayer’s hands before becoming art Chrisman’s number 25.

From Phil Lyon’s buddy Chuck Kirckpatrick comes our next great shot. Bill Niekamp showed up at Bonneville in 1951 with his America’s Most Beautiful Roadster winner from the 1950 Oakland Roadster Show. Now sporting a roll bar, Bill entered his number 66 ride in1 ride in two classes, Class B Modified Roadster powered by a 248″ ’40 Ford and Class C Modified Roadster with a 309″ ’40 Ford for power. In Class B we have him running 134.932 mph for a ninth in class and in Class C we have him running 137.195 for a 14th in class. Not bad for a street machine minus windshield. On the left is Art Gray’s one of 7,063 made Deuce Cabriolet’s that he had chopped and stripped down to run. Hidden behind the solid side panels was 275″ ’46 Ford. Art had to run the car as a coupe in Class C. His speed was 104.772 mph for a last place behind Lynn Wineland at 106.257 mph. Lynn would go on to be editor Rod & Custom Magazine later in the decade.

Mark Karol-Chik is one of our friends from Facebook. He sent us some goodies this year that he had picked up in an antique store years ago when he lived in Denver area. The Kenz & Leslie boys were Denverites and their swoopy twin-flathead powered streamliner is seen at Bonneville in 1952 carrying Floyd Clymer sponsorship ((ollection.KCH_014). We can’t make out the crew members but we know driver Willie Young ended up the week with a one way run of 252.20 mph and a two-way average of 244.66 mph to take the class record. The car becomes the fastest Hot Rod in the world at the meet.

Starting his racing career at the lakes in the ’30s and then designing the Fargo 4-banger head, Johnny Junkins had a long and varied racing career. His “Roadster” is seen at Bonneville in ’53 in it’s Class A configuration (PCK_030). The engine was a ’53 Dodge Hemi V8 that he pulled two pistons from to make it a 180″ V6. The trick worked as he grabbed first in class with a speed of 135.74 mph. In it’s all 8 pistons configuration for Class B and displacing 241″ John ran 137.19 mph to gain a fourth in class. The car was also raced as a track Roadster. This cool shot is from John Peschek.

More new stuff just showed up thanks to David Steele in the form of a photo from Tom Sparks. This one shows a slick looking 1932 Ford three-window that was the 1954 Weaver-King    Bonneville entry out of Denver (TSC_038). The Class C Coupe and Sedan was powered by a Ford flathead and ran 126.22 mph for an 11th in class. Note the radiator blocker made from a George Town Hot Rod Hill Climb poster. We call that cool! On the left in the background is the yellow number 990 Class C Streamliner of A. R. “Tommy” Thompson out of Golden, Colorado. Tommy ran 158.73 mph in the Olds-powered ride for a second in class. Years later the Summers Brothers asked Tommy if they could borrow his car’s name for their new one in build. He said yes and “Goldenrod” will be known forever by land speed enthusiasts forever.

It’s tough being overshadowed by one’s brother. Such was the case for the gent seen in our next shot courtesy of John Haigler (HAI_104). We see a somber-looking Eli Vukovich waiting in his Drake powered midget before a race at Bonelli Stadium-Saugus Speedway right after WWII. The brothers were tough competitors right down to trading blows with each other with their fists.

This late ’50’s shot was snapped in the Vancouver, Washington area by soon to be Bonneville racer Gary Richards whose also a friend. The Class a Street Roadster in his shot started life as a homely looking Model-T Touring car before a Slo-Poks club member inserted a hopped up flat motor with wild pipes to make our day (GRC_026). Note the roll bar, white-wall slicks, quickie and Moon’s caps.

Vying with Chet Knox in the “keeping us snowed with great images” department is irascible Joe Henning. We see Tony Bettenhausen captured at work during the USAC Golden State 100 miler at Sacramento back on October 25, 1959 (JHC_932). He’s behind the wheel of the Offy-powered Kuzma of Lindsey Hopkins. Tony B. started the race in third spot in the 18 car field and dropped out after completing 72 of the 100 laps with a faulty Mag. He was classified as finishing in eighth place. Bob Tronolone took this great shot.

We’ve known Gary Hartsock for a few years now. He’s been going to Bonneville for years with his teams’’’ varied roadsters and has contributed many great shots for your viewing pleasure. He also has friends like Dave Cecaci who took our next shot and passed it on to us (CEC_004). It’s hard to believe that this car started life as a 1937 Simca. George Fields from Newark, Texas has been running the car in various iterations for years. For Speedweek 2012 he entered the car in Class C Blown Fuel Competition Coupe. Under the hood is a fuel burning 370″ Rodeck V8. George was gunning for another George, in this case, Poteet and his record of 291.844 mph set in the Blowfish back in September 2009. On the 16th of August George completed his mission by capturing the record with a certified two way average of 300.022 mph. Wow! Another fast guy, Tom Burkland, teamed up with George on the ride’s rear wing.

We have a backlog of old shots that we dig out from time to time to keep things spiced up. I guess you could put this Don Cox image in this department (DCC_713). This chopped and channeled 1935 Ford 3-Window Coupe, model number 48-720 that they made 31,513 of, looks like it still needs more than a little work to finish. It was snapped at the Paradise Mesa drag strip in 1952 and nothing more was known about it. That is until we stumbled across a picture of the Strand Automotive Special number 310 that ran in the Sports Car Closed over 1500cc at Bonneville in 1954. Both cars were run out of the San Diego area and a close inspection of the chop and raised rear fender mods lead us to believe it’s the same car. Maybe somebody might find it hiding in a garage

While on the Sand Diego thing this shot just came to us from former San Diego Roadster Club member, Bonneville and El Mirage racer, Starter, Friend and shooter extraordinary Bill Taylor (BTC_130). Looks like Blake Anderson has both inside wheels off the ground in this fantastic shot. It was taken at St. Croix Valley Raceway, Wisconsin on August 28, 2015. Blake races in the Upper Midwest Sprint Car Series. Bill is probably out racing, I mean driving his snow blower as a hot rod.

The Foundation couldn’t exist without people like David and YOU. A super big THANKS is in order from all of us at the AHRF to you for sharing our favorite subject’s history.

I did a quick count and close to 200 people have shared their collections so we could all be richer in our understanding of the past. When we first started our Pioneer Interviews a decade ago it was a big deal to find two dozen shots in a collection. There are exceptions to the rule, take for example our next shot from Chet Knox (CKC_2101). Chet’s lent us way over 2,500 shots from his collection that has taken decades to amass. We call that amazing. In this shot, we see   Sam Hanks behind the wheel of Danny Hogan’s Offy-powered midget at Oakland Speedway. San became the 1937 American Midget Association Champion in this car.

Next up is this beauty from John Haigler (HAI_035). We’re lost as to where or when this shot of Herman Libenburg was taken.

We’ve had a mix of old and new stuff show up this year and in keeping with that may we present our next and last image for the year. We went back to ‘51 and bagged Tom Medley’s December Hot Rod cover illustration. Being respectable hot rodder’s, and always up for a challenge, we pulled up next to the Stroker and challenged him to a race.

Merry Christmas and Happy New Year from all of us at the AHRF. 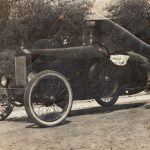 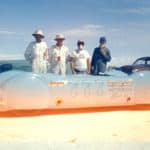 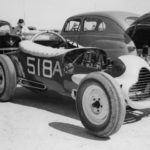 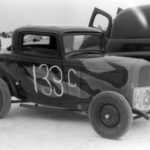 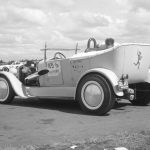 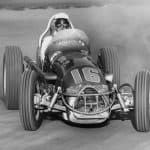 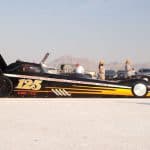 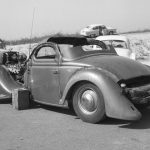 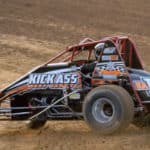 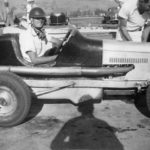 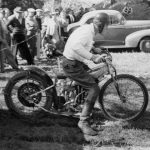 Previous Post: « This has been quite a year
Next Post: Mysteries to solve and a weird mix of cars »
↑ Top of Page