Being that it’s a new year and we are all revved up and full of spit and vinegar lets jump into what been happening in-between all the social stuff.

Last week we started off with a cool looking T run-about shot we got from Dave Ward. To remind you, his Grand-pa was one Harvey Ward, a real player is So-Cal racing in the late ‘20’s-early ’30s. Our first shot this week shows Ernie Triplett in Allen Guiberson’s number 4 during the 1929 racing season (WFC_017). That’s Harvey Ward on the right with the cool tie and someone named Bert we haven’t figured out yet.

Triplett ran this Allen Guiberson owned car at Legion Ascot among other tracks and trying to figure out all the details from that era is a real bear as most of the stuff we’ve read on the subject was written 50 years after the fact and is full of holes. It fits perfectly with our objectives of trying to get the facts right. Being that Ward and Triplett were well-known figures of the day we asked ourselves who was this Guiberson fellow. Well, in our digging we found that after WWII and well into the ‘50 that Allen Guiberson’s name kept popping up with a string of famous cars and drivers and was the owner of more than a handful of Ferrari’s that were driven by the likes of Hill, Ginther and a cat named Shelby. Boy, do we have our work cut out trying to figure this one out.

We guess that’s a perfect segway into our second Harvey Ward shot that shows him at Indianapolis in 1930 (WFC_054). Ernie Triplett and mechanician Bert Williams (Might this be the same Bert in the above shot?) are seen on pit road at Indianapolis in 1930. They are in the number 17 Guiberson Special entered by Allen Guiberson (yep, this is the same Guiberson). This car was built up using a Whippet chassis and was fitted with a 183″ Miller four. The white car had qualified for the race in sixth starting position. At the finish they had managed to complete 125 laps before a piston failed. They were classified as finishing in 15th. And yes, that’s Harvey Ward behind Ernie in his stroker hat.

Over the next couple of years Harvey was the owner of some of the fastest cars at Ascot featuring some of the heavy-weight drivers of the era like Arvol Brunmire, Babe Stapp and as seen in our next shot (CKC_935), Kelly Petillo posing in Harvey’s Gilmore Speedway Special. The pix was taken at Legion Ascot in 1933. Needless to say, we’ve got lots of digging to figure all the players out in the Ward Saga.

Jumping subjects but not really, we spent a full day this week with Andy Casale going over a few hundred shots that we’ve collected for you over the last year or so. The subject matter was midgets and not the kind you’d find at the Ringling Brothers Circus. Thanks to Andy we now have some owner and driver names to go with the pictures.

Next up is one of the shots we just processed from Joe Henning (JHC_1428). In it we see Gib Lilly in Ernie Casale’s V8-60 powered ride in 1947. Gib won a 30 lapper at Huntington Beach on April 6 and a 30 lapper at Fresno on May 25 in this car before Johnny Parsons drove it to a win at the Rose Bowl on June 10. The scan is from an Ansco neg that was unprotected in a box from the ’80s.

Next up we see the two Lysle Greenman 1949 Blue Circuit cars (JHC_1403). The 8-Ball was driven by Edgar Elder and it looks like the rear axle tube broke. Casale made these rear ends that were used in numerous midgets of Elder’s teammate Alan Heath.

Andy had never seen this shot or knew one of the rear ends failed. In the back is the number 20 Greenman car that was driven by Elder’s team mate Alan Heath.

A decade later the fierce competitors joined forces for an assault on Indy. The Greenman-Casale car (BHC_040) was shoed by Johnnie Tolan in 1960 and unfortunately didn’t qualify for the race. Car 23 in the background is the Bryant Heating & Cooling Special driven by cam grinder Dempsey Wilson. He started in last place and was the first one out of the race on lap 11 with it was said, mag problems.

Here’s one of the great shot s Andy Identified for us (HAI_119). Frank “Satan” Brewer is all smile while lining up for a race at Bonelli Stadium in 1946. Behind the tail of his car is Cal Niday putting on his helmet and heading for his number 20 V8-60 powered ride on the left. On pole in row two is the number 75 Drake powered ride of Andy Gutherie (not seen) while owner Elmer Ross is in thought by the front wheel. To the right of the Elder car we see Boob Carroll climbing into his number 25 ride for the day. Carroll also raced under the name Bob Sellers.

We couldn’t resist showing you this wild shot from circa 1937 that shows how far a race team would go to bring some pizza to itself (CKC_2152). It probably helped that awards were given for best appearing pit crew. Now only if they had an not so pretty car award. As for Andy McNair the driver, the only thing we can find on him is that he finished fourth in an ARA (American Racing Association) Stock Car Race at Oakland Speedway in November 1937. In one of our conversations with Joe Henning he reiterated that racing is all about Show Biz. We wonder if Joe didn’t bag this fancy clothing idea when he suggested to Ed Roth to wear a tux and tails to clean up his dirty look after being signed with Revell.

Changing gears a little we dug into some more newly scanned Tom Sparks shots for you. This 1956 shot shows Tony Nancy’s 22 Jr, flathead powered roadster being flat-towed to yet another drag race (TSC_042). Most people don’t realize that Tom was the builder of the potent supercharged flat motor under the hood of the Nancy machine. Up front is the Sparks & Bonney shop truck with Tom Sparks behind the wheel, Tony Nancy in the middle and Ted Bonney on the right.

We were surprised to find this color shot of a C-Type Jaguar in Toms stuff (TSC_043). That is until we read the caption and discovered even more about the man. The car was owned by Midland, Texas’ Joe Mabee and shot sometime after the San Francisco Golden Gate Park Road Race in 1953. At the time the car was being maintained by hot rodder Ray Brown and his ace mechanic, one Tom Sparks. Behind the wheel is Bill Pollack, one hot shot racer in his day. As luck always shines on us, we saw Bill this Saturday and mentioned the pix. He went on about how god-awful the paint job was and gave credit to Sparks for doing it. Small world. The car was entered at B-ville in ‘53 but d

We just had to dig out this companion shot showing The Guy Mabee Drilling Special numbered tire.

At this time rodders were invading other forms of motorsports. Take for example Architect Donald Parkinson. He got bit by the sports car bug in the early ’50s with not too much prodding by his brother-in-law Phil Hill. In ’51 at Pebble Beach Don had a little problem stopping his Jaguar XK-120 and rolled it up into a ball. In the best hot rod tradition, he scrapped what was left of the body and had Marvin Faw re-skin it in aluminum to a Bob Cumberford design. He punched out the engine to 3800 cc and became a terror on the tracks. This picture shows the car at Torrey Pines in December 1952 where he finished second to that Phil Hill guy (GGC_339). Faw restored the car in the ’70s and it can be found vintage racing today. The Chuck Manning flathead powered special that inspired the Bellesiles can be seen being pushed in the background. Right in front of the Packard, you can just make out one of Roger Barlow’s Simca Special’s built by Emil Diedt.

This Gear Grinders Car Club photo also from the ‘52 race at Torrey Pines race shows a close up of the Chuck Manning’s car (GGC_340). Chuck used all Ford running gear bolted to his chassis design. It was powered by a 4260 cc Flattie. It was the most successful hot rod road race car around until Bill Stroppe showed up with his Kurtis.

To give you non-Ford fans a lift here is a good engine shot of Chuck Tatum’s hot rod road racer (DWC_029). Chuck went to a sports car race in his home town of Stockton, CA in 1952 and got the bug. He made the frame from 2″ .049 tubing and used a ’32 front end and a ’41 pickup rear of Ford heritage. He had Jack Hagemann build the aluminum body. For power, he chose a 302″ GMC that was 25 pounds lighter than a flattie. It won first time out with Chuck Manning driving and won three more times before the season was over. For ’54 he had our bud, Dan Warner’s dad Harry, owner of  Wayne Engineering, sponsored the engine program and the car even went to Bonneville where it ran 157n 157e where it ran 157 mph. On the right we see the number 90, it’s on a Morris based special that says this shot was taken at Pebble Beach in 1954.

That’s enough of the weird stuff for this week. Have a great new year. 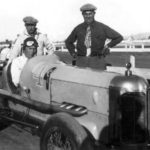 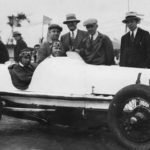 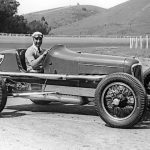 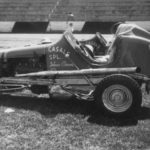 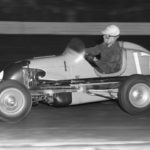 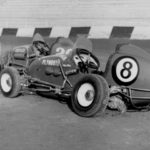 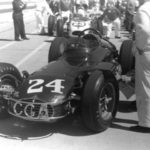 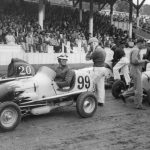 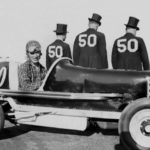 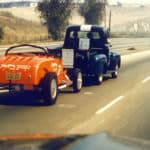 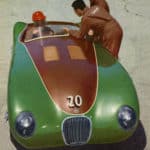 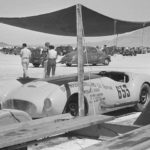 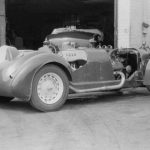 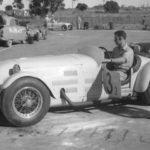 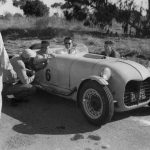 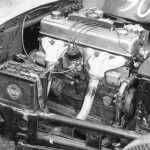 Previous Post: « Up for the Challenge
Next Post: Front to Back with Sparks and a Florida Roadster »
↑ Top of Page