As we know our friends at the Post Office are on hard times spending way more money than they take in (Does this sound like another Government system we know about?). Anyhow, the Post Office that use to be three blocks from us was closed down and moved about a mile away. No problem except that now you have to wait in line forever to do business. On the upside is that they still deliver mail and that’s where we have to say thanks as this week we received a couple of their deliveries that contained some cool stuff that we’re gonna share with you.

Long-time Bonneville racers Sonny Rossi and his wife Dixie called last week and said to be on the lookout for some of their pix. They showed up this week from those Postal folks and boy do we have some cool stuff. They’ve been scanned and all we have to do now is make a phone call to them and get some real info on their rides. Their Modified Roadster is seen at Bonneville in September ’99 during a USFRA meet (SRC_013). Under the hood was a 1975 122″ Chevrolet Vega 4-banger. Another cool shot shows Sonny working on his Tempest powered rear-engined Dragster (SRC_003). We can’t wait to get the skinny on this one.

While on the drags stuff we got this little poster whose brothers probably ended up being stapled on telephone poles all over the North East (JSC_049). This one’s in pristine shape thanks to Jere Sheehan. This kind of thing really helps us build our database on drag events across the fruited planes.

Another cool package via the old Post Office this week came from our friend Doug Stokes who’s the PR Guru out at Irwindale Speedway. Inside it was some priceless goodies that will help fill a gap in a form of racing that started in Southern California on November 26, 1949, at a little bull ring called Lincoln Park Speedway that is way off the radar in the motorsports world. Ever heard of T.Q.M.R.A.? That stands for Three Quarter Midget Racing Racing Association or TQ’s for short. We’ve only run across a couple of pictures of these mighty mite’s in the last decade so what a find! Thanks, Doug.

Let’s have a look at one of these funny machines (STO_006). Bob Feuerhelm is seen collecting one of the perks you get when you win a race on circle tracks. Were not sure of the track but were going to say the shot was taken sometime in 1950. The Feuerhelm Brothers, Harvey, Bob and Pete were the creators of this new form of racing car as it’s big brother the Midgets, like every other form of racing, started out as home builts for little or no money and turned into expensive playthings that the little guy couldn’t afford. By luck I ran across the January ‘50 issue of Road & Track and they had some tech info and rules for the little cars and the caveat that if anybody offers you Two Grand before a race you had to sell them the car. By the way, Brother Harvey won the first-ever TQ race in an identical car to Bob’s that was powered by a J.A.P. Motorcycle engine. The chassis surfaced t found more info on this car in the June 1950 issue of Popular Mechanics a few years ago and was put on display at our local auto book store by its unknowing owner for clues to its identity. We directed him to the June ‘50 issue of Popular Mechanics that had a story on the car. Another problem solved by AHRF researching International Pictures back in 1959 staring nobody that you ever heard of (JMC_4635). This card features hot rodder Ak Miller’s Jack Sutton bodied, Frank Kurtis chassied Chrysler powered “Sports Car”.

We also dug out a shot of this “other kind” of rod (CWC_042). Ak Miller entered the Caballo de Hiero Mk II (every car had a name in the old days) in Class D Modified Sports Car at Bonneville in 1957. It had a 395″ Chrysler under the hood and ran 177.42 mph for second in class. It was also featured on the cover of the April ‘57 issue of Hot Rod Magazine and was built to run in the Mille Miglia sports car race in Italy on May 12 of that year. Miller and Doug Harrison ran it as car no. 524 and dropped out with a broken exhaust. Next to it is George Hansen’s Vette no. 44 that ran in Class C Sports Car. A  340 ” Chevy V8 powered the car to a first in class with a speed of 144 mph and set a record at 144.322 mph.

It was also a bummer week as we got news of Tom Medley’s passing. To pay homage to the man we found this shot taken of him “working” at the First Annual Motorama held at the Shrine Auditorium (Convention Hall) in Los Angeles between November 16th and 19th way back in 1950 (REP_032). R.I.P. Tom.

If you look at the car on the right of Tom it looks like we now have another problem to solve like what is it.

We were doing some research on early Motorcycle LSR racing this week and we’re looking through the September ‘50 issue of Cycle that had a story on the bikes on the dirt at Rosamond Dry Lake. In the back, we ran across one of Tom’s other famous cartoon characters “Flat Out Snodgrass” (JMC_4637). Hope you enjoy it as much as we do.

While looking for Tom’s black and white shot of him working in our archives we ran across another shot taken at the Pete Peterson “Produced” Motorama.  Always thinking, Pete had his PR boys walk around and take a lot of shots that show us some of the interesting rides that were there. REP_033 is one of them. We see Leroy Viersen’s rad custom built on a Deuce chassis. If you check out our story from January 20th of this year you will find a shot of this very same car in living color that we snapped of the windshield area at the 2011 GNRS (JMC_4596). Behind the car is a finned Delehaye that’s seen in one of our previously posted shots (REP_023).

Being the researchers that we are, we present this Eric Rickman shot of the same car as above seen on the cover of the June ’51 issue of Motor Trend (JMC_4640). This car was named the “Skylane Motors Special”. For you older golf fans pretend Chris Schenkel is whispering “look at the birdie” for Eric before he shot it. The car was the brainchild and work of perfectionist builder Leroy Viersen of Sun Valley, California that took almost three years to build. Starting with a 1932 Ford chassis (yes it is a hot rod) Leroy gathered up some ’48 Buick front fenders, ’48 Continental rears, a ’49 Cad grill and had at it filling the spaces in between with some steel using nothing more than a hammer and a torch. Under the hood was a slightly warmed-over ’48 Merc V8.

Time to check the mail again, By! 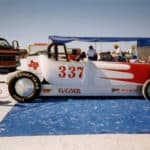 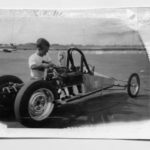 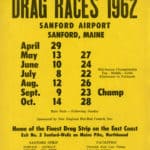 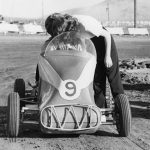 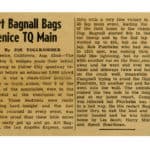 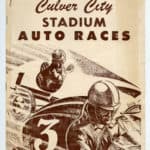 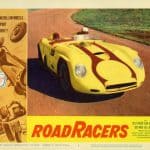 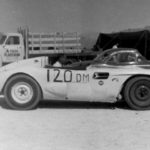 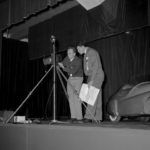 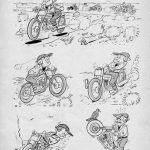 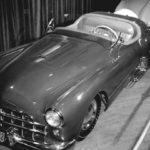 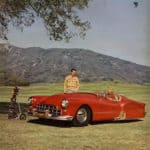