Carroll Hall Shelby was a man who personified the ultimate in motorsports racing. The man who invented the Cobra and went on to challenge and win many major sports car racing events is (in our book) a true pioneer of hot rodding. While his success took him to the grand circuits of Europe and had him rub shoulders with people like Enzo Ferrari, the hard work that got him there is all about hot rodding—in essence, shoehorning a big engine into a little car.

Shelby was born January 11, 1923, in Leesburg, Texas to Eloise and Warren Hall Shelby—a rural mail carrier. He was named Carroll after a preacher—it was a God-fearing family, no drinking, no swearing, no fishing on Sundays. Although he liked cars, Shelby’s early, pre-World War II years were not particularly auto-centric. In fact, he was mostly known as a golf hustler.

After attending the Aeronautical Engineering program at The Georgia School of Technology, he joined the Army-Air Force in 1941 in the hope of being a pilot. Had it not been for the Japanese bombing Pearl Harbor, that dream might have gone unfulfilled. The attack, however, changed everything and he soon gained his 2nd Lieutenant’s bars. Although he saw no action, Shelby spent the war in Texas as a flight instructor and test pilot. He graduated with the rank of staff sergeant pilot after marrying Jeanne Fields on December 18, 1943. They went on to have three children: daughter Sharon Anne Shelby, born September 27, 1944, and sons Michael Hall, born November 2, 1946, and Patrick Bert, born October 23, 1947.

After the War, Shelby tried his hand at a number of jobs from oil rig ‘rough-necking’ to driving dump trucks to raising chickens. He was not successful at any of these ventures. In frustration, he turned to sports car racing as a possible means of steady income.

One of Shelby’s earliest drives was for Ed Wilkins in his MG-TC at Caddo Mills, Texas. Shelby had minimal experience but he had a burning desire to win and win he did driving all manner of sports cars. He made his biggest mark driving British Allards for Charlie Brown and Roy Cherryhomes. In 1952 and ’53, he drove five straight races in Cadillac-powered Allard J2Xs—he won three out of five. Again, he was impressed by a big V-8 in a small-ish, lightweight car. Less well known was his stint at Bonneville driving a modified, streamlined, and supercharged Austin-Healey 100S for Donald Healey. In August 1954, he set 16 U.S. and international records.

While racing in Argentina he met John Wyer, a British chap in charge of the Aston-Martin race team. Wyer offered him a factory ride in the 12 Hours of Sebring, March 7, 1954. Although the car retired early, Wyer was impressed enough to invite Shelby to England where he placed second at Aintree and then raced at Le Mans, France. In an interview with Diana Bartley of Speed Age magazine, Shelby said, “You have to be able to follow orders and take the right advice—besides going fast. You can only reach the top as a team man.”

Well documented, Shelby went on to have an amazing career as a racing driver and tales of him driving in bib overalls with a nitroglycerine pill under his tongue are legendary. This would be the Shelby the entire world came to know when he won the prestigious 24 Hours of LeMans in 1959 driving an Aston Martin DBR1 with co-driver Roy Salvadori. Although this put Shelby on the map, internationally, as one of the world’s greatest racing drivers, his ever worsening heart condition would force him out of the driver’s seat ( and away from the nitroglycerine pills ) soon after and focus his attention more toward running his own company and/or race team.

Through all of this, Shelby had come to realize that he needed is own car, preferably a lightweight British sports car with a powerful, American V-8. In 1956, with partner Dick Hall, he had opened Carroll Shelby Sports Cars in Dallas selling British imports—he knew there was a market and his business had success. A few years later during a lunch with John Christy, editor of Sports Car Graphic, he learned that A.C. Cars in England had lost its supply of Bristol engines. Shelby knew the A.C. to be a capable little racecar…  what it needed was an American V-8.

Once again, fortune smiled on Shelby and during a chance meeting with Dave Evans of Ford Motor Company, Shelby discovered that Ford was about to introduce a new, lightweight V-8—they sent him one of the new 221 ci engines. Here, the story differs but it is well documented that the first car was assembled and tested in England late in 1961 by Shelby and Derek Hurlock of A.C. Only then was the car shipped, less engine, to the U.S. Meanwhile, Ford had increased the engine’s capacity to 260 ci and this new engine was installed in the A.C. at Dean Moon’s shop in Santa Fe Springs, California, by hot rodders Doyle Gammell, his father, Roy, and the great Phil Remington. The latter being someone who would have an integral part in the success of Shelby America.

Again, luck was on Shelby’s side when Evans was in Los Angeles and able to experience the car first hand. Impressed, he invited Shelby to display it in the Ford exhibit at the New York Auto Show. Painted a vivid pearlescent yellow by Dean Jeffries ( and now tagged the “Cobra” ), the little sports car was a hit in New York. In their book “Carroll Shelby’s Racing Cobra” authors David Freeman and John Christy say, “Everyone who saw the car just knew it could suck the headlights out of anything else in the building.” They went on to say, “Shelby knew what he had and he knew that the people who pounded the typewriters and punched camera buttons knew it too.”

Despite all the media accolades and the current prices commanded, the Cobra was not a huge success. Some say it was a financial disaster. What was a success, though, was Shelby’s connection to Ford that led to a long a fruitful marriage for all involved.

The Cobra proved to be one hell of a track car—still is—and its success enabled Shelby to write more chapters; first with the Daytona Coupe and then with the Ford GT40. In 1965, the Daytona Coupe, penned by Peter Brock, took the World Manufacturer’s Championship. All the while ( and doing less well ) there was the GT40. In the hands of John Wyer, this hybrid designed in Dearborn and built in England just wasn’t performing as it should—it wasn’t winning. In desperation, Ford handed the project over to Ol’ Shell’. So, in 1965, Shelby’s team had changed “damn near ’bout everything to make it a winner”, said Shelby. And win they did…  taking the coveted crown at Le Mans four consecutive times from 1966 through 1969. “Ford apparently spent $12 million for that first bottle of Moet de Chandon”, concluded Shelby. As if this weren’t enough for Shelby during this time, the first Shelby GT350 Mustang debuted this same year  ( January 27, 1965 ) and caused  Shelby to say, “This is the first car I’m really proud of.”

Shelby’s buddy throughout those heady years with Ford and the Mustang had been Lee Iacocca. Suddenly finding himself across town a decade later and running Chrysler, Iacocca felt that another Shelby project could be the ticket to sparking new interest in this old company. There had been gas crunches, recessions, and general uncertainty. What the public wanted, it seemed, was an economical car and Chrysler gave it to the in the form of the Omni/Horizon with Carroll Shelby acting as the beard. They many not have been fantastic cars, but, developed in Shelby’s own ‘Skunk Works’ in Santa Fe Springs, California ( not far from Dean Moon’s original shop where the Cobra was developed ), they filled a public need for low-cost transportation while proving to be quite competitive in the ever growing SCCA Club Racing movement.

Shelby’s name stickered on the side of a K-car might well have helped save the ailing company but it wasn’t enough—they needed a Cobra. Enter Bob Lutz and chief designer Tom Gale. Penned by Craig Durfey the V-10 engined Viper appeared at the 1989 Detroit Auto Show as a running prototype to gauge public reaction. Within three years, it was in production and may well have been the most exciting Chrysler product in the history of the company. Writing in Car Guide Magazine Online, Alan McPhee quoted Shelby as saying, “In my opinion, the Viper is more just-plain-fun to drive than a $500,000 Ferrari. It’s not supposed to be the world’s most sophisticated sports car, just a ’60s-style, all-American performance car that’ll put a grin on your face when you drive it.” Shelby would drive a Viper pace car at the 1991 Indianapolis 500 and the Dodge Viper would surprise all by going on to be a highly competitive car in international endurance racing.

Shelby was lucky to have experienced much of this at all. He had been slowing dying of heart failure for many years and it was only by chance that his luck hadn’t run out sooner than later. In classic Carroll Shelby fashion, lady luck would again be on his side when, appropriately enough, a gambler died of a sudden aneurism at a craps table in Las Vegas and Shelby received his heart through a transplant. When they opened him up, the doctors said they had never seen a heart in such bad shape as Ol’ Shell’s. A tough ol’ Texan, Shelby still had a few years left but many were spent fighting legal battles over naming rights and Cobra clones. Despite its initial underwhelming sales, over the years, the Cobra had spawned a veritable snake pit of clones, copies and unauthorized kit cars. The theft of his baby angered him to say the least. That being said, Shelby once commented on this and his life in the following way, “I got to do most all the things I wanted to. I got to travel the world racing sport cars in the ’50s, won LeMans in 1959 while still a young man, developed an American powered sport car for the masses, beat Ferrari at their own game and on their own turf at the 24 hours, turned the docile little Mustang into a race winner, and then got to see and experience all of Africa before it was ruined. All while beating death back at every turn thanks to my darn heart condition. So, I suppose I can’t really complain”.

Carroll Hall Shelby died May 10, 2012, leaving a legacy like not other. 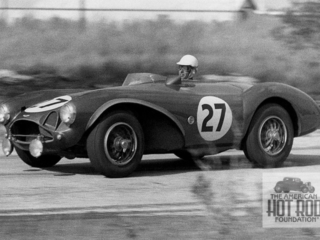 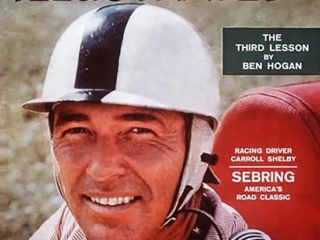 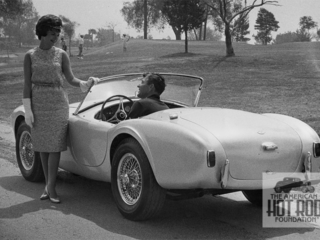 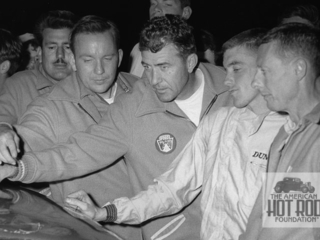 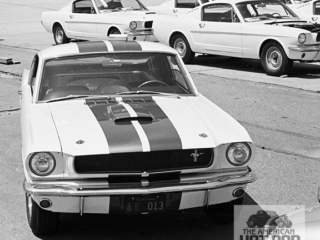 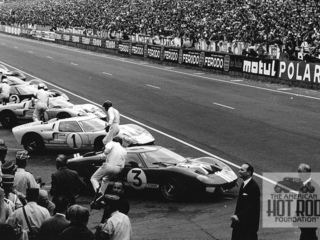 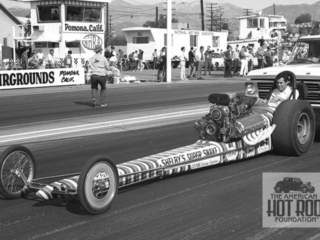 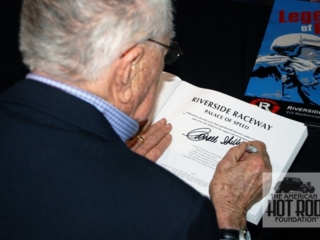 Tune in to The AHRF Rodcast #16, Featuring Carroll Shelby: