Before taking off for Bonneville next week one has to do a little double time trying to lower the piles of goodies on the desk and some extra work like prepping a story and sending it to our Right Coast  Diva Pascal to post next weekend while I’m working on a suntan on the great white Dyno.

This last week we scanned about 140 new shots from both prints and negs and did some color and tonal corrections to get them in the ballpark of being retouchable. Let’s have a look at what it took to get them ready for you.

The first group of shots are from Scott Phy, the son of 1950 S.C.T.A. Points Champion Bill Phy.  In BPC_105 we see the Class A Lakester of Stanford Brothers and Bill Phy at Bonneville in 1950. The Road Runners members ran a 150″ 1939 Ford V8-60 under the rear bonnet that propelled the car to a first in class with a speed of 141.950 mph. The original was a 4” x 6” Kodak print that has had some color restoration and scratches removed. With prints, the image is usually cropped or small smaller than what was originally captured on the film so we put back some of what was cropped off. We dug out our “Official Results” from Bonneville and as usual, they weren’t complete as usual and only gave where the cars finished in class. No car numbers etc, so then it’s dig out the program to see if the cars are pre-entered and by who. Naturally, the roadster, coupe, and red home-made job weren’t pre-entries. That’s where having mucho prints come in so we can see other sides of cars that help us with our sleuthing.

We’ve got this shot pegged as being taken at the June 2, 1946, S.C.T.A. races at El Mirage (BPC_073). Number 57 is Gophers’ member Don Blair’s Merc powered Unlimited that was supercharged and would soon make a lap at a speed of 141.06 mph. Don then went out and set a two-way average for a new record of 134.08 mph. Without anything but a Gophers plate on the Deuce in front of Don’s car we were stuck on an ID until we spotted Lou Baney in his goggles standing next to it. That meant he was running as number 59 at this meet and turned a speed of 119.84 mph. In the rear to the right is the number 64 machine that was listed as a Club Post Entry but no name went with it. The car ran 113.78 mph. Behind it is the number 52 Deuce Roadster of brother Bruce Blair who ran 113.20 mph that day. Behind Bruce’s car, we see another roadster that sports a 1 and an 8 with a hidden number in between, is it Edward Haade, Phil Roberts, William Roberts, Archie Tipton, Doug Deverich, Ted Peckles, C. O. Prather or George Ausburn? When we find another shot of our mystery Roadster that has a readable number we’ll let you know who the real player was. This shot was a little 3 3/8” x 4” black and white print trimmed down to the edges so we took the liberty to add more sky and foreground to fit our 35mm format used on the site.

Our next cool ride is Kenny Lindley’s Modified powered by a Ford flattie at the April or June ’46 S.C.T.A. lakes meet at El Mirage (BPC_068. The guy in the striped T-shirt was working behind the timing stand and was notating speeds on timing slips taped on the car as they returned from a run. Were on the lookout for his ID. In April Kenny ran third in class with a speed of 126.76 mph. In June he ran 128.02 mph for what we’re calling first in class against Karl Orr’s pre-war class record of 133.03 mph. This car would later be run by Dietrick-Thomas and get a new nose and tail. It would also end up as S.C.T.A. Season Co-Champion and still exists in that form. The bottom of the front wheel was trimmed off so we fixed that and also added some sky like the above shot.

Here’s a cool B&W front shot of Road Runners member Bert Letner’s Class C Roadster that was powered by a Merc flattie fitted with Elco Twin plug heads (BPC_079). It was taken at El Mirage but Houston we have a problem. The car is in an unfinished state with it’s “in the white” hood and bellypan. A side view of the same car at the same race shows it wearing the number 26 instead of the number 24 that it was assigned. Either this was taken at the first meet of the ’47 S.C.T.A. season on May 25th with the wrong number painted on it or Bert snuck over to the earlier May 2nd Russetta meet for a couple of test laps. Note the front of the exhaust pipes are open in the front so that air could flow in to supposedly aid savaging. Also, note that there is hardware inside so they could seal them if the experiment didn’t work. This print was again trimmed to a size of 3 1/4” x 4 3’8” to fit in its scrapbook and we scanned it about six times its original size so it would work in a coffee table book down the road. We added image to all sides and eradicated all the pinholes, dirt and fold marks.

Here ia s sampling from a contact sheet of images taken for a story on the Bill Burke-Bob Lasiter built Streamliner that appeared in the January 1961 issue of Sports Car Illustrated magazine and was sponsored by the same. The shot in the upper right appeared as a 2-page blowup in that issue. Bill Stroppe and Company put together a 156″ Falcon six for Bill and Bob to power the little 85″ wheelbase car. At the bottom left we have unknown, Bill Stroppe, Bill Burke,  Bob Laster, and Verne Houle. After tipping the Nitro can the car two wayed at a speed of 205.949 mph for a new Class D Liner record that got Bill into the 200 MPH Club. In typical Burke humor the car was called “Golden Commode” instead of Shit Box. Each image is 2 1/4” X 2/14” and made by laying the neg on the print paper and exposing light to it. If you look closely you can see processing marks on the negs and tons of spots that equaled hand processing and a dirty printing environment. We’ve scanned every image and they are now each18” wide.

We know that image quality doesn’t matter when it’s used on your cell phone or laptop but thanks to Scott Phy in a 100 years we hope someone will be thanking us.

We couldn’t resist pulling out a Freddy Larsen color shot of the Commode (FLC_262). The press and on-lookers nick-named it the Pumpkin Seed as a ‘60’s version of political correctness. It was Burke’s interpretation of the MG EX-181. The car was entered in two classes, Class D as number 1888 and powered by a Bill Stroppe prepared 156′ Falcon inline 6 and class G as car number 888 with a 61″ Austin-Healey Sprite 4-banger for power. With Bill driving the class D streamliner ran 202.360 mph for a first in class and then he bumped the class record to 205.949 mph. In class G it managed to run 124.82 mph for a second in class against the Wee Eel ride at 158.80. The Wee car then set the class record at 135.182 mph. Burke later teamed up with Mickey Thompson and ran a Tempest in it. The car still exists today in lengthened form and is owned by Jim Travis. In recent years Jim, his son Randy and Danny Thompson, Mickey’s son, have all driven the car.

During the week we attacked some more color negs shot at the Grand National Roadster Show by Doug Rasmussen. Here are a few with what we could pick up in the images as we don’t have a copy of a scanned ‘70 program in our files for reference (hint).

We see the Arlo and Lynn Ashley T-Roadster Pickup they entered in the ‘70 GNRS (DRC_126). They called their ride “Fun Time T”.

Then we have Jim and Joann Demattie’s Blown-Chevy powered T-bucket (DRC_136). The red ride to the right looks like a Berry T powered by a V-Dub.

Last up of the show shots is, take one perfectly good 1968 Pontiac Firebird and turn it over to Custom King Darryl Starbird and you end up with the Starbird XSM (DRC_138). For giggles out came our Encyclopedia of American Cars to get some dirt on the Bird. They made 90,152 of the puppies that were powered by an 250” inline 6, a 350” V8 and a monster 400” V8. We’re wondering what XSM means in the name, extra small motor or……….!

Doug’s shots were scanned from 35mm color negs. Needless to say, the color really shifted over the last 44 years so we spent some time trying to bring them back to life. Hope you enjoy them as much as we do as we have more rolls yet to do.

To change pace here’s a little ditty published back in 1950 (JMC_5055). As Publisher Floyd Clymer pointed out in this book’s forward, The word “Special” is the foreign counterpart to what we in the States refer to as a Hot Rod. Inside were some interesting rides like a priceless Type 37 Bugatti powered by a ‘37 Hudson 8 and the cover car featuring a home-made chassis, Stude front suspension and an engine out of a WWII German Light Tank. Yep typical hot rod stuff and as Artie Johnson used to say, “Very Inter-rest-ting”!

We are not done yet. In the check out strange old magazine department we ran across some old stuff (JMC_5055). This Federal-Mogul Corporation ad showed up in the July 1933 issue of Commercial Car Journal that dealt mainly with Trucks and parts for them. We’re so used to thinking modern insert bearings that we got a reality check when we realized that the ‘33 Indy winner shown with Louis Meyer up ran his exotic Miller straight-8 on babbitt inserts.

As a segway into heading off to Speedweek there are a couple of survival rules that everyone must follow. One is to take plenty of suntan lotion with you and keep well hydrated. The hydrated part for racers consists of a thing called beer and that’s why this next shot is relevant (JMC_5056). We see the latest in Streamlined Truck design that has been (was) developed by the Available Truck Company out of Chicago (never heard of them). Inside cab temperature is controlled by enclosing the front mounted engine in a wind tunnel. Wow!. Were talking Bonneville speak with aero that’s mixed with beer, how cool is that. From a write up in the August 1934 issue of Commercial Car Journal.

Seriously, this Speedweek marks 100 years since race cars made their first appearance on the salt. It doesn’t matter that it was a dog and pony show to make some bucks for a promoter, we got real race cars speeding across our holy grail. One of the cars was called Blitzen Benz. We had one of these wonderful beasts at the Land Speed Exhibit at this January’s Grand National Roadster show that seen in our next shot (JMC_5054). Under the hood is a 21.5 Litre 4-banger. Oh yeah, we retouched out the rope that was between the lens and the front tires to give you an unobstructed view.

We were asked the question was this the actual car that Teddy Tetzlaff was timed in at 142.85 mph back on August 11, 1914? To make sure we didn’t screw up we checked out the Blitzen Bible written by Karl Ludvigsen back in 2006 (JMC_5053). The answer is no, it’s not the same car, darn it, but the good news is the Benz in the above shot is supposed to make an appearance at the salt to Celebrate the Century of Speed. I can’t wait to hear it rumble. 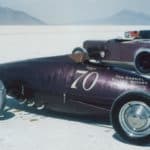 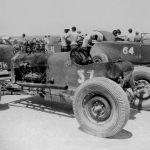 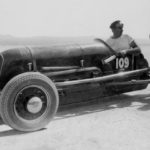 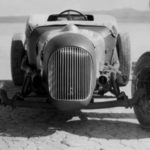 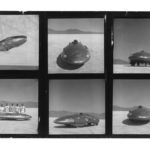 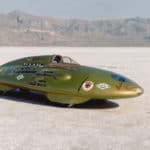 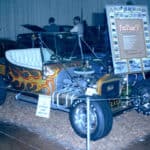 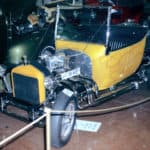 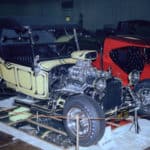 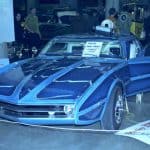 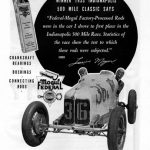 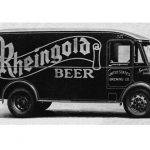 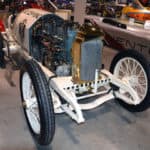 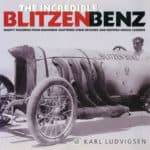 Previous Post: « We never stop learning from the old stuff
Next Post: Rediscovering the Unknown »
↑ Top of Page