It’s Father’s Day Weekend and that means Roadster Time at the L.A. County Fairground and trips to a few builders shops and their open houses. Let’s say we were not disappointed.

First stop of the busy weekend was the So-Cal Speed Shop on Friday. As usual, tons of cool cars that we’ve seen before and a few new ones that were interesting like our first shot (JMC_5471). In the quest to put it in the weeds, this rod would have a few problems on anything but the flattest of roadways. This one looks to the frame rail to the ground so look out for those nasty speedbumps in do-gooder neighborhoods. Back in the ’40s and ‘50s to get a low look you either z’ed the chassis front and rear or torched out the floor-pan and slid the body down over the chassis.

In the last few years, builders have picked up an even older method to “Get Down”. Take a look at our next shot from 100 years ago to see what we mean (CKC_598). The term for the chassis used in the old days was “Double Drop”. We’ve even seen this trick used on carriages in the 1800s to give the gentry more room in the passenger compartment so nothing is really new. This picture was shot in Glendale, California on February 3, 1915. The driver is Eddie O’Donald and the car is a Duesenberg. Eddie was the winner of the 101.018-mile Tropical Race held in the center of town.

Behind So-Cal’s shop at the open house was this lineup of great rides (JMC_5472). Everywhere you look these days the old Roadster Pickup can be seen. Note how far the Deuce’s windshield is laid back, we call it swoopy.

About five minutes down the road is Bobby Walden’s shop. Bobby spent years mastering the Yoder Power Hammer and even spent time at So-Cal before he opened his current shop. JMC_5474 shows but a few of the rides that packed into his parking lot that we would like to take home.

Bobby’s been putting together the end-all of Deuce Roadster Pickups for the last couple of years. This shot (JMC_5476) shows some of the magic he worked on the race car inspired windshield.

Out front on the stat we would like to take home.

Bobby’s been putting together the end all of Deuce Roadster Pickups for the last couple of years. This shot (JMC_5476) shows some of the magic he worked on the race car inspired windshield.

Out front on the street, we spied this fantastic-looking Deuce Roadster sporting a Firestone logo on each door (JMC_5477). Wow! And check out those hubcaps that read “Firestone Air Balloon Wheel”.

Saturday was L.A. Roadster show and Swap meet time at the Fair Grounds. As usual, it was sensory overload time with eye-catching rides everywhere. Up front, I’ll say there was one car that was spotted first at So-Cal and then at the Fair that represented to me the next wave of the street rod evolution. JMC_5484 is it. Yea, it’s a clean ‘27 roadster re-pop on Deuce rails but you really have to look at the details. The first thing you notice is the headlights, then the coil-over front suspension, then the carbon-fiber windshield posts, then the wheels, then the…….  the list goes on and on.

Our next shot shows the headlight that blew me away (JMC_5489). Unless you were an auto manufacturer with deep pockets constructing one-off show cars making a set of these headlights would have been out of the question. These days, not so. These light details were printed on a digital printer at home. Rapid prototyping is here to stay and the computer savvy next-gen car builders are gonna blow us old dudes away in the creativity department.

Another car that said different was this 3-window Deuce Coupe spotted at Bobby’s and photographed at the Fair (JMC_5480). What grabs you is how understated it is. Take the low-slung Rolling Bones style headlights for instance. And the gold scallops, they grab your attention the way they run up into the roof but don’t overpower the side of the car. We also like the little teardrop at the end of the side stripe. Cool.

There was a whole row of cackle cars that got the senses flowing with nitro but the one that said different to me is this blown ‘61 T-Bird (JMC_5479). I’ve never seen one set up like this before. The only thing missing was smoke pouring from the rear slicks in its imaginary burnout.

Our next shot is another sleeper (JMC_5478). When you first walk by it you say to yourself, just another pretty green roadster. When you study it a minute you start scratching your head and say hey, this us minute you start to be a Model A Coupe, or was it. Lots of nice detail work.

On the way home I heard this rumbling sound in the Diamond lane next to me. Next thing I know this slick little orange Model A whips by me bouncing all over the lane (JMC_5483). That’s all part of the charm of riding in a buckboard with a big motor under the hood on a sunny day. Viva La Hot Rods.

Besides running around all weekend we’re almost through with scanning a couple of new scrapbooks. We usually don’t know who the originator’s of old scrapbooks are that were created decades before but this time we lucked out with one of them. Carved in the cover with a knife was John C. Haigler. We don’t know anything about John except that he liked racing. The front half of his scrapbook was filled with motorcycle shots dating from before WWII. Let’s look at a couple.

First up is a shot with the rider identified as Sam Arena (HAI_031). We asked some of our rider friends if they had ever heard of a Sam, we struck out so off it was to do a little research. We hit paydirt in the guise of the AMA Motorcycle Hall of Fame where we found that Sam, who was born in 1912, was one “Bad” motorcycle rider having won the 1938 Pacific Coast Championship race at Oakland Speedway. He also ran Speedway bikes. After WWII he went on to win four AMA National Hillclimb Championships from ’46 to ’50. In the shot note how close the exhaust pipe is to the ground as Sam slides through a turn.

Our next bike shot is also a mystery (HAI_049). On the left, we find Gus Hunter with his hand on the rear fender of a Harley Davidson hill climb rig. Note the board behind the bike used for staging and protecting spectators from clods of dirt. Also not the chain on the rear well to add some traction. The rider is identified as Snooky Owens. The only thing we could find on Mr.Snooky” is that he rode a Crocker Speedway bike in the early ’30s. Needless to say, we’ve got a lot of work cut out for us on identifying the players in Mr. Haigler’s 50 plus shots.

We constantly find shots of cars that we know but have morphed into a second or third life. A good example is car number 5 photographed at a Mojave Timing Association meet in November 1948 where it ran 121.95 mph (DOT_120). The owner/builder of the Class A Modified was Bud Hand. Bud was a member of the 4 Barrel’s Club and at the time held the class record at 127.76 mph with the Riley 4-Port headed B powered ride. The tall gent in the RoaDusters jumpsuit leaning on the Model A in the rear looks like our pal Bob Morton.

Here’s a shot of the same car found on page 10 of the February 1953 issue of Auto Sport Review (JMC_5394). It was snapped at Saugus Dragstrip. The car is now fitted with a 24 stud flattie topped with a McCulloch centrifugal blower. It ran 112.50. We’ve found lots of lakes cars morphed into drag cars. Bodies were then trashed, chassis lengthened, engines swapped and we will also bet a lot of them ended up as landfill. Sad!

Here are a couple of shots from yet another pre-war scrapbook put together in the Bay Area. First up is this shot of the same car found on page 10 of the February 1953 issue of Auto Sport Review (JMC_5394). It was snapped at Saugus Dragstrip. The car is now fitted with a 24 stud flattie topped with a McCulloch centrifugal blower. It ran 112.50. We’ve found lots of lakes cars morphed into drag cars. Bodies were trashed, chassis lengthened, engines swapped and we will also bet a lot of them ended up as landfill. Sad!

The results for the first S.C.T.A. meet of the year have been posted so here are a few notated shots from last weekend’s races. Ed Van Scoy brought out his Class B Grand Touring Chevrolet Corvette for the June 13-14 meet but didn’t have a good time (JMC_5484). After two days of frustrations, he only managed a lap of 122.952 mph against his own 213.172 mph record set back in November of 2012. The car was snapped on Friday before being inspected.

You never know what you’ll find under the hood of an S.C.T.A. ride at El Mirage or Bonneville (JMC_5485). This is a GMC 6-banger with a monster Turbocharger setup that was driven by Nathan Stewart. Entered as Skip Pipes Racing running the number 374 in Class F Blown Fuel Roadster, s his cool shot showing Einar “Swede” Lindskog early in his career at Oakland Speedway back around ‘36 or ’37 according to the plate on the rodded Chevy on right. Born on Saint Patty’s day in 1917, Swede built his first racer in his high school shop class and went racing. He honed his skills considerably before going off to war with the Air Corps. He hooked up with Jim Travers while fighting “Japs” on Iwo Jima and they built a midget racer on the island with “borrowed” parts in their spare time. After the hostilities, it was back to racing. The Swede made it to June 27, 1946, before crashing to his death before 18,500 spectators at Gilmore Stadium.

In this 1937 shot, we see future racing champion Duane Carter Senior in his formative years (CKC_2107). The number 15 “Midget” is seen at Oakland and is powered by an Elto. Olie Evinrude sold his half interest in his engine business back in 1913 and made a pact not to build motors for five years. At the end of the agreed-upon terms Mr. Evms Mr. Ev upon terms Mr. Evvof the 1948 racing season. And yes, we even went so far as including the photographer’s shadow in the shot for that period feel. Running a Ford Flathead Banger, driver Scott Oliver cruised through the traps at a speed of 129.057 mph against a 140 mph minimum.

The Antique Nationals are scheduled for next weekend at Fontana so stay tuned. 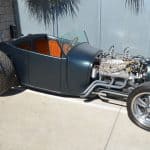 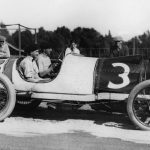 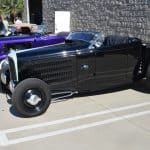 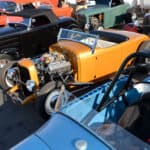 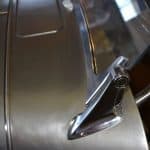 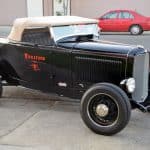 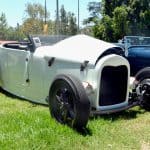 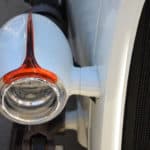 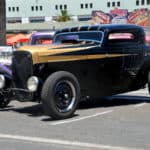 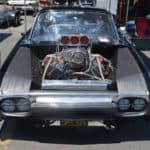 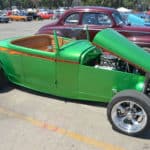 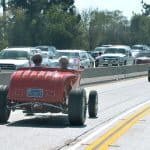 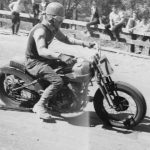 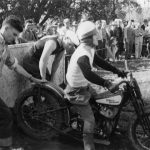 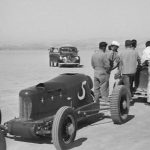 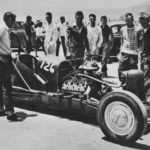 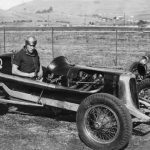 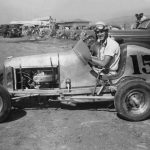 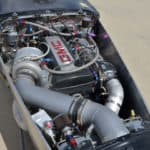 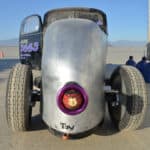 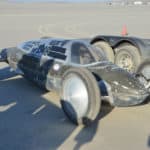