A few months back we received a bunch of shots taken at Speedweek in  53. The shooter was John Peschek from Tacoma. Early this week we received an envelope from John with a shot he had just found in his  Man Cave  (PCK_048). John and his buddies had just arrived after a 24-hour drive from Tacoma and the first car they saw when they got on the salt was the liner as you see it here. He was excited then and from reading the note that came with the shot those emotions from 61 years ago are still with him. You re the best John, Thanks.

We always on the lookout for old stuff and when we laid eyes on our next image for today (JMC_5252) it just had to come home with us. It goes with our growing collection of auto magazines with illustrated covers and reminded us of an old shot the legendary Ray Brown building his first Hot Rod back in the mid  40 s. When we opened the magazine up we discovered it was Volume One, Number One of the magazine from January 1953. We lucked out again.

I check out our AHRF facebook site every so often to try and get a read on what shots  Ring the Bell of the viewers. Its also fun to read the comments and we always find little bits of info that make us a little smarter. I even had my Bell rung the other day when I recognized a couple of Like names. One was David Tanamura who we had received some low-res shots from eight or so years back. Here s one of his shots that helps us sheds more light on the never-ending saga of the car everyone knows as the Chrisman number 25 (TAN_011). This shot was taken at El Mirage back in 1951 and was the entry of Road Runners member Harold Miller. At the June 9-10 meet the car ran 144.462 mph to finish fourth in class behind Earl Evans, Breene & Haller and Bob McClure. Thanks for being there all these years David!

Last week we went down to Isky s for one of those great lunch bench race sessions. After that, it was off to my sister’s house to be a little sociable.The next morning when I left I had a doggy bag of food and a book called  Front Page, 100 years of the Los Angeles Times. We read everything around here and lucked out again when we got to the front page of the May 23, 1949 issue that had a headline that read  Crash of Hot-Rod Racers Kills Three…. JMC_6286 is our scan of the story. A little digging revealed that neither the S.C.T.A or the Russetta Timing Association held a meet on the 22nd. Our last hope was to check Veda Orr’s  C.T. News but the publication’s final issue only covered the April races. Bummer! Mojave and Bell were both running meets during this time but without results were left in limbo.

In today’s world were bombarded with advertisements everywhere we look. In the good old days it was just as bad. This phenom was also present in the automobile racing world starting back on day one but at least owners were cool about the whole thing by just added the word Special behind the product s name. One of the best at this subtly was George Stewart who raced under the made-up name Leon Duray. We see one of his cars at Legion Ascot Speedway back in late March 1933 called the Mallory Special (CKC_691). The car started life as an RWD 91″ Miller sponsored by Packard Cable and was now fitted with a newer and larger 4-cylinder 220″ Miller. Duray s driver in this picture is an up and comer by the name of Wilbur Shaw.

Our next shot is from 1955 and shows Bill Vukovich after qualifying for that year s Indy 500 Mile Race in Lindsey Hopkins’ Kurtis-Kraft KK500C (SBC_041). As you can see on the side of the car, sponsorship decals are making inroads but were not loved by all as contingency money was creeping its way into the sport. After posting the second fastest qualifying speed Bill started in fifth spot after running 141.071 mph because he didn’t qualify on the first day. He would go on to lead the race for the fourth year in a row before catapulting over the wall after running into another car on the back straight. He would not survive.

Last in the sponsored car series is the top  ’08 Erickson-Vette aerial view of the entrant and driver Trevor Larson. It was snapped at Pomona on Thursday, October 13, 2014, during Super Gas qualifying. We got lost after counting 38 stickers on just one side of the car. Trevor came all the way from Starbuck (not the coffee), Minnesota with the 585  Chevy powered ride.

As you can guess by now we took a little trip out to the Auto Club Raceway at Pomona to watch the NHRA Mello Yello 2014 Countdown To The Championship during the 50th anniversary of the Automobile Club of Southern California, NHRA, Auto Club Finals. See what I mean about over the top in the advertisement bombardment department. Anyhow, we snapped quite a few shots and present you with a small sampling.

Pittsboro, Indiana s Antron Brown is the driver of record of Matco Tools Top Fuel Dragster that is a shell of it’s soon to be self on set up day (JMC_5253). We see an almost stripped ’14 DSR chassis minus it s AJ500″ power plant.

Not far away we spied John Force’s trailers and their just unloaded ’14 Ford Funnycar chassis and body on an overcast Thursday morning. The body featured yet another wrap job that we hadn’t seen before. The JFR (John Force Racing) 500″ motor is yet to be topped with an induction system.

We caught up with Erica Enders-Stevens and she was kind enough to sign one of her Autograph Cards for us (JMC_5265). A little later we stopped off and chatted to Jason Line. Seem she’s hooked on Bonneville after driving Wayne Jesel’s truck into the 2-Club and is scheming on building an un-disclosed at the moment ride.

For the 2014 event Alan Ellis out of Mapleton, Utah made the trek to Pomona just attend the 50th Anniversary of the NHRA Auto Club Finals (JMC_5259). His ride is called Rush II and runs in A/AP Comp Class. It’s based on a slightly modified ’23 T body. Go is supplied by a 513″ G.M. motor.

It’s fun to cruise around the little guys pits as without them there wouldn’t be a real show at all. You also get to look at the cars up close and personal as opposed to being stuck behind some portable fence 20 feet from the car you want to look at. Another upside is that hanging on almost every car is a fancily painted helmet that makes for a great still-life s. JMC_5260 is a cool one that I call 6200 RPM.

My favorite ride of the weekend and one you don’t see every day is what they call a GTS/4 (JMC_5262). Ted Seipel from San Leandro, California showed up with one that you might recognize as a fugitive from Miami Vice, yep it’s a ’71 Ferrari look-alike. Running in Super Gas, one wishes the car had a barking V12 under the hood, but alas it had a thundering 406″ Chevy in its place. We also wonder what Enzo s lawyers would say about this one? They sued over the Vice car because it was a replica body on a Vette chassis and won for trademark infringement and dilution.

As you might suspect, we read a lot around here and one we just finished is Art Evans’ new book on sports car driver and American legend John Fitch. On the cover, we see Bob Sirna’s ’55 Mercedes-Benz 300 SL at Bonneville in 2004. Bob persuaded John (standing next to the car) to drive and that he did, turning 151.783 mph on August 15th and 149.211 mph on the 17th. Not too shabby for an 87-year-old kid. Inside you ll find Fitch flying fighters in WWII, build hot rods, racing on the Cunningham, Mercedes-Benz and Corvette factory teams and much more.

This week we also ran across an old scrapbook put together in the thirties in of all places England. Here are a couple of scans from it. In early 1934 the newly formed Auto Union Conglomerate (AUDI) persuaded Germany’s new boss, Adolph Hitler, to through lots of bucks their way so they could build a car to contest the new 750KG formula. Ferdinand Porsche was hired to head the design group on the project. By mid-year AUDI decided to go after some land speed records and by the end of the year unveiled this streamlined version of their Grand Prix Car (JMC_6287). This 80-year-old clipping shows the car on the Avis Speed-drome in Berlin. This car and it’s Mercedes-Benz counterpart introduced streamlined body designs that have influenced Land Speed Streamliner body design ever since.

In JMC_6289 we see two different newspaper clipping from the London Daily Herald. The one on the left is dated August 19, 1935, and tells of George Eyston’s impending trip to America and the Bonneville Salt Beds to go after some speed records. The one on the right is dated September 9, 1935, that tells the story of George Eyston’s success in breaking several of Ab Jenkin s Land Speed records on the Bonneville Salt Beds. There are a couple of hundred other clippings in the scrapbook that need scanning. The Land Speed stuff will be the first.

We had to include the next scan for no other reason than it’s super historic and not too many people know it even happened (JMC_6290). After Eyston broke his speed records he came to Los Angeles to visit. One place he stopped was at the intersection of Fairfax and Melrose. Behind the Herberts Drive-In on the South-East corner stood one of the most famous race tracks in Southern California, Gilmore Stadium. On his visit, George jumped into one of Charlie Allen s Offy powered midget’s and did a few laps. Our photo captures him having some fun.

Friday night was the monthly S.C.T.A. Board Meeting and boy was it a Duesy. It turned into one of those to be continued sagas and left one wanting for liquid refreshment. To wind down from this one, one has to do something relaxing so on Saturday morning it was off to the Autobooks. Author Charles Seims was there signing his and Alan Darr s just released self-published book on the Gilmore Oil Company (JMC_6285). Inside are tons of neat photos on the companies history and lots of old race car photos. If you are a fan of petromobilia and especially Gilmore, this 240-page book is a must-have. If you can’t live without one call 360-425-2463 as they won’t last long. 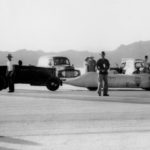 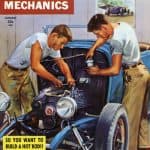 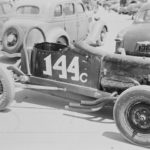 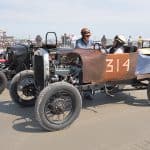 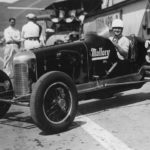 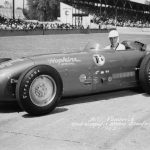 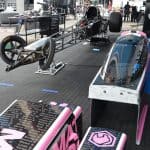 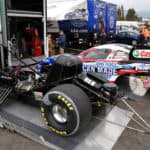 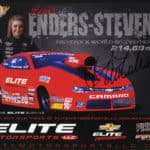 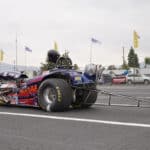 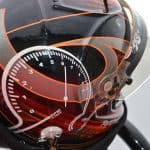 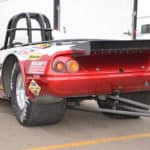 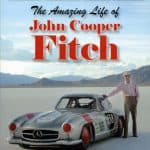 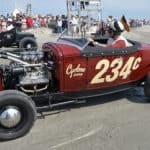 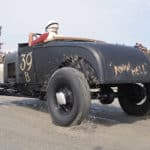 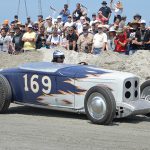