Last week we showed you a picture of Bill Cramer’s hopped-up M.G at an unknown event that we guessed might be Paramount Ranch. A little digging this week showed us that it wasn’t. On Saturday I went to a monthly gathering of auto aficionados hoping to maybe get the story straight. Early ‘50 So-Cal hot-shoe Bill Pollock thought it might be the Sandberg Hill Climb. When I returned home the first thing I did was do a search for Sanberg, CA. The once blink in the eye place on the map consisted of an Inn that’s been gone for years. Another site found listed Hill Climbs of the past and Sandberg was listed. Seems there were two events held at the location April 20, 1950, and September 10, 1950. Even better was the location info of the event. The starting line was on the old Ridge Route at the intersection of Pine Canyon Road. Mapquest supplied a satellite pix and a map image and it took at least 30 seconds to figure out this kink in the road and that corner kinda matched the photo. While studying the photo of the M.G. at speed we noticed a water tank in the background and a fence in front of it. Back to our Mapquest satellite image and zoom in as close as possible revealed a water tank and a fence that matched the one in the picture to a tee. We can categorically tell you that the car is plus or minus about 10 feet from the 600 feet mark of the 3168’ track length. Thank you Internet.

While we’re on those funny hopped up foreign jobs lets have a look at two more. Los Angeles architect Donald Parkinson got bit by the sports car bug in the early ’50s and went a little overboard with not too much prodding by his brother-in-law Phil Hill. In ’51 he went up to the Pebble Beach road races and encountered a little problem while trying to slow down his Jaguar XK-120 during a race and rolled it up into a ball. In the best hot rod tradition, he scrapped what was left of the body and had Marvin Faw re-skin it in aluminum to a Bob Cumberford design. Don punched out the engine to 3800 ccs and became a terror on the tracks. This picture shows the car at Torrey Pines in December 1952 where he finished second the tracks. (GGC_339). Faw restored the car in the ’70s and it can be found still vintage racing today. The Chuck Manning flathead powered special can be seen being pushed in the background. Right in front of the Packard on the left, you can just make out one of Roger Barlow’s Simca Special’s with a body by none other than Emil Diedt.

December was not a good month for some old-time hot rodders. We lost Stuart Hilborn and Andy Granatelli. Ouch! To pay them honor we present a shot of each from early in their careers.

Stu is seen at the lakes in ’46 standing next his streamliner eeked out in the driving uniform of the day, chinos, a t-shirt and a cloth helmet with aviator goggles. In April he ran 139.75 mph for a first in the Streamliner class. In June he ran 138.24 mph. In July he ran 135.95 mph for another first in class. In July he brought out a roadster with the liner’s flattie in it to work out some bugs on his experimental Fuel-Injection system. In October he was back in the liner and ran 139.96 mph for yet another first in class and an oh-so-close to the Bob Rufi class record of 140 mph but oh-so far away.

The Brothers Granatelli, lead by Andy in the center wearing the dark jumpsuit, showed up at Indy in 1946 with this old Miller-Ford fitted with a Ford flathead. Driven by Danny Kladis, the car qualified for the race with a speed of 118.890 mph to start from the 33rd and last position. The car was towed during the race and was disqualified, thus beginning a few decades of bad luck at the Speedway. The team was awarded a 21st place finish after completing 46 laps. In ‘48 Andy got behind the wheel of the car and proceeded to stuff it in the wall, ending his Indy driving career.

Both these Icons of the sport will be sadly missed.

After last week’s story was published we received another package from Jere Sheehan. That gave us enough info to start a listing of New England area drag race events. Activities started in September 1953 and we got a little carried away. Right now we’re at 105 confirmed race weekends through 1960 and counting. Taking it a little further, we started a master list for the whole U. S. Were starting from strip one at Goleta, then to the First S.C.T.A. Drag Race held at the Tustin Blimp Base in ‘50 then on to Santa Ana and their 22 races held in 1950. It escalates from there, in ‘55 were up to 186 races just in the Southern California area alone for the year. This is going to be a long project. Were also looking at doing a definitive list of car clubs and auto shows and Timing Associations.

Here are a few shots we’ve played with this week to show you we’ve actually done some real work.

First up is a cool old Harley-Davidson that was entered at Speedweek in ‘75 by John Cameron out of La Mirada, CA (CLA_068). The Class A-AF-1000 ride sports a 1000cc mill and runs on fuel. It was after the standing AMA 165.480 mph record. All we have to do now is find some AMA record lists to see if John made it.

This badly  Shinn at 126.93 mph. Since he was a post entry we don’t know what club colors he flew.

Melvin Straw of the Low Flyers ran this S.O.H.C.”T” powered “Streamliner” called “Polecat” at the August 24, 1941, S.C.T.A. lakes meet at Muroc. He also ran the car at the July 20 meet as number 337. We don’t have a speed for him at either meet. This car looks like a refugee from Legion and then Southern Ascot.

The new year is starting out pretty good in the form of a new package from Santa received earlier today. Since cars and babes and dudes go together here’s one that might add a little heat to a winter’s night. We don’t know who the lovely lass is but we know the other players are (JMC_4528). On your right trying to hold the front wheel on the ground is former roadster and midget driver Manny Ayulo. On the left trying not to dent his just completed nose is master fabricator Lugie Lesovsky. The car was being built for owner Bob Weinberg and would carry the name Coast Grain Special. It wore the number 8 during the 1952exposed one shows Leroy Hansen of the Carlsbad Oilers who ran this slightly worse for wear channeled Deuce at the lakes in ’48 (DCC_599). Under the hood was a 240″ ’41 Merc with a set of Harrell heads, Navarro intake, Smith cam, and Wico mag. In June he was listed in the program but wasn’t timed. This was also the first meet that the Oilers ran as S.C.T.A. members. In July he ran 116.58 mph. We have him entered in the August, September, and October meets but have no speeds listed for him. Since the S.C.T.A. only lister the to 20 in each class and other shots in this group had everybody wearing jackets this is most likely the October meet. In the background to the right is Road Runners member  Harvey Haller’s Ford flattie powered ride.

Next up is from a new batch of shots we just received that contained some cars we’ve never seen before. Buddy Combest is captured waiting to run at El Mirage on April 28, 1946, in his Mercury powered Deuce that’s been channeled. Bud ran 109.89 mph against first in class man Randyy AAA Champ Car season and was driven by who else but  Manny. That’s a 270” Offy hiding behind to shapely legs, Manny finished 20th in the 500.

Last up is what’s left of a Polaroid. The car is one of Ted Halibrand’s push the envelope Shrikes from ‘65. It was assembled of many cast magnesium pieces to showcase Halibrand’s mastery of the material. It was designed by Norman Timbs who also did the Blue Crown cars for ‘47. We can trace this car from Indy in ‘66 as the Greenman-Wilson Special that was driven by Dempsy Wilson. It was a DNQ. It wore the same number as in this shot but had a different paint job. The last race we know the car existed was at was Trenton in ‘69 where it crashed in practice. During ‘69 it ran as a Dempsy Wilson entry with a Chevy in it since it got one in the engine bay and a sign in the window on the left says Wilson Cams, for now, we’re going to assume the ride is parked at Dempsey’s shop. 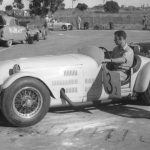 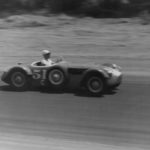 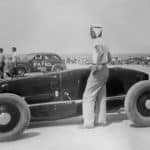 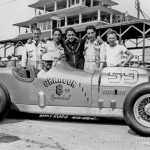 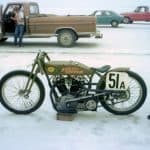 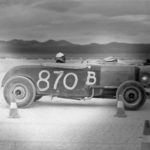 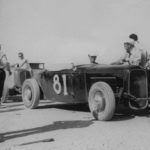 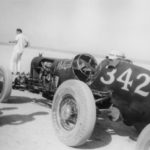 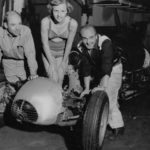 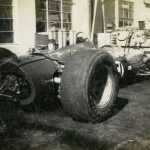