If you live in a big city you’re usually blessed or cursed with a yearly Auto Show where you can go and check out the latest offerings from your favorite manufacturer. This last week the Los Angeles Convention Center played host to such an event so we had to go and check it out. One of the cool things about big auto shows is that there are usually a few Dream Cars that are there to wow you and we found a couple the piqued our interest. Let’s have a look.

Wandering through the Chevrolet booth we found this eye-popper (JMC_5322). The first thing we noticed was the number 66 on the nose wing and front fenders. That could only mean one thing to a car nut, Jim Hall. Yep, the famous Chaparral racers that he drove all wore that number. At first look the full-scale ride looked great until the Mr. Practical in me said hey wait a minute, how can you have a driver’s helmet up front when there is no room for the rest of the driver’s body to go with it. Oh well, it’s a show car after all so I guess it doesn’t have to really work.

We dug out a shot of a real Chaparral with Mr. Hall behind the wheel on the way to winning the May 2, 1966 USRRC (United States Road Racing Championship) 190-mile sports car race at Riverside International Raceway (JMC_2596). We can still hear the Chevy V8 thundering as it passed us all those years ago.

We ran across another show car in the guise of a Mini (JMC_5324). One look at the car transported us back to 1956. Why you ask, the rear fin and car color were almost a dead ringer of the old Pontiac Club de Mur.

We just happened to have a drawing of the Pontiac Club de Mur from a General Motors Brochure that was handed out back in the day (JMC_5326). The original concept car was powered by Pontiac’s fire breathing 287″ V8 that put out 300 ponies. It would be fun to find an old Monogram model of the car and built it as a Bonneville racer.

Talking about some semi-old stuff, we spent a couple of days this week scanning some slides from the early ’80s. Let’s have a look at a few.

This shot was taken at El Mirage back on July 11, 1982. We see the Frank Klos & Wes Cooper Model B powered V4/VALT chop-top Model A in the morning (DBC_1141). The class record stood at 120.160 mph at the beginning of the meet. Frank went out and did a T.O. (Time Only) run that wasn’t recorded. Roy Creel and his dad went out and upped the record that day to 124.137 mph. As a side note, we just finished digitizing over 40 hours of old tape recordings of racing pioneers like Ed Winfield, Kong Jackson, etc. courtesy of Mr. Klos.

The old Irwindale Raceway is long gone and now home to the Miller Brewing Company. If you turn back the clock a few decades you will find that it was the home of the Antique Nationals. This June ‘81 shot shows a younger Art Chrisman being pushed out before an exhibition run in the famous number 25 car that can now be seen at the Wally Parks NHRA Museum (DBC_1115).

Finding old race car parts is more difficult these days than in the past. One place you could always find cool old stuff was in pickup truck beds at the Antique Nationals and our next shot shows one such find (DBC_1133). We see a hard to find HAL cylinder head for a Model A-B-C back in 1982. With a little bit of hard work the butchered valve cover could have been repaired too.

Our next shot was taken this Friday at a place called Willow Springs Raceway (JMC_5334). The happy gent is Bonneville 300 MPH Club Member Seth Hammond sitting in his first time out ‘27 Ford Track Roadster. He had literally just pulled into the pits after taking and completing a spin in his new toy. What’s even cooler is the car’s power plant, A old Ford 4-banger with you guessed it, a HAL OHC head on it. Makes you wonder if the Antique National’s find could be in the one in Seth’s ride?

While we were out at Willow we naturally had to snap a few pix. Our next shot shows the old Tony Simon Caged Sprint Car doing what it does best, sliding through a turn sideways (JMC_5330).

We used the above shot to set us up for our next shot showing a sprint type car that we got from Richard Parks. Richard’s gotten a lot of stuff given to him over the years and sometimes it makes its way to use. The original donor has been lost to history but the images live (RPC_016). This 1950 negative scan shows Bill Walker’s Lakester at El Mirage during a Russetta meet. Another shot of the car shows it’s wearing the number 397 B on the other side. We don’t have any Russetta programs from that year so we can’t tell you how fast it went. Note the American Racing Club t-shirt. The club was normally known as the A.R.C.’s.

At the same time, we got about 20 other negs from Richard that were taken at the drags. We think the track is Riverside. The burry car on the left looks like the Chrisman-Cannon Hustler I (RPC_021). The newest vehicles in the bunch make us think they were taken in 1959.

We took some time off this week to pig out on some Turkey at my sister’s house, so, Happy Belated Thanksgiving. Being professional pack-rats is a family trait and my sister falls right into that category. She’s been cleaning out the garage and ran across some boxes she hasn’t seen in a decade or so, and naturally, she chose me to relieve her of some of their contents. With that, here are a few finds that got scanned from original negatives that somehow survived.

First up is JMC_5340 that shows a front view of the then in construction Xydias & Batchelor So-Cal Streamliner.  It carries the number 5 on the side that says the shot was taken in May 1949. Sitting behind the driver was a 1939 V8-60 Ford displacing 156”. It had Edelbrock heads, a Navarro intake manifold and a Kenny Harman cam and ignition. We don’t have a speed for it but we know in July it was back and set the class record with a run of 142.40 mph, almost 20 mph faster than the second place car of Al Schirmeister.

At the time Punky was a member of the S.C.T.A. Roadmaster’s but preferred street racing to lakes racing. Thirty plus years later in August ‘82, we see Punky’s car at Ascot Speedway during a WRA (Western Racing Association) exhibition at the track (JMC_1153). This is the last ride Indy car fabricator Wayne “The Whiz” Ewing built.

Turning the clock back to around ‘52 and another “sister” neg, we see a home-built sports car after about three years of work (JMC_5338). Neighbors complained about the noise of hammers beating aluminum so the car was transferred to the “Bunker” at the Burbank Airport where the noise was not a problem. Next week there is going to be a Christmas Party in this very same shop that now houses a Sprint Car. I’ll take the camera to see if I can duplicate the angle.

To close out this non-productive week here’s a shot of yours truly taken back in 1948. Not everybody gets a hand built car for their third birthday, I was lucky and got this dark blue job that sported the number 8. Wish I had it now. 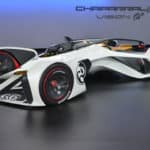 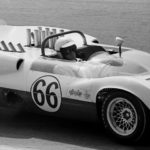 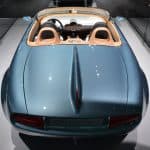 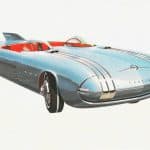 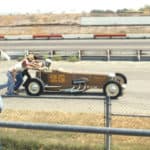 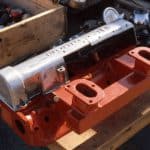 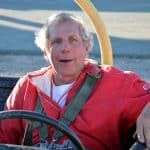 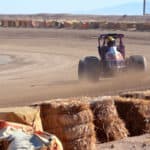 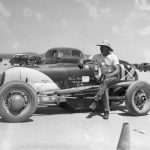 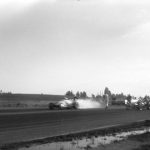 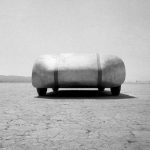 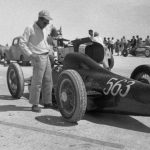 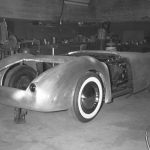 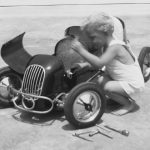