Early in the week, I was talking to friend, and AHRF contributor, Kay Kimes. We were trying to figure out who a person in a shot was that I thought might be Harvey Haller. It wasn’t but it got me doing some research that determined the first seven shots in today’s story. Are you ready?

Back in 1950, the Third Hot Rod Expo was held at the Shrine Auditorium in Los Angeles. As a bonus feature and one hoped that would draw extra folks to the show it was decided to have a Circle of Champions exhibit. Our first shot shows one of the players in the exhibit (REP_072). Robert E. Petersen was behind the show and commissioned this shot. we know Tom Medley took some of them so this may be one of his shots. On the right is Ab Jenkins. Mormon Meteor.

Our second image is a Mike Roberts color production for Information Tourest Supply, Inc. out of Salt Lake City. This Color R Post Card Number C1902 shows Ab Jenkin’s Mormon Meteor III in the Utah State Capitol Building where it was shown for many years. The car weighed 4800 pws the collection of players in the exhibit (REP_072). Robert E. Petersen was behind the show and commissioned this shot. we know Tom Medley took some of them so this may be one of his shots. On the right is Ab Jenkins. Mormon Meteor.

Our second image is a Mike Roberts color production for Information Tourist Supply, Inc. out of Salt Lake City. This Color R Post Card Number C1902 shows Ab Jenkin’s Mormon Meteor III in the Utah State Capitol Building where it was shown for many years. The car weighed 4800 pounds and was powered by a 750 horsepower engine. Ab had sold the car to the State of Utah for $1 with the proviso that they take care of it. Needless to say years later Ab’s son Marv re-possessed the rotted-away car and restored it. You will note that the signage behind the car is the same that is seen at the Expo in ‘50.

To the left of the Meteor in our lead-off shot is the Xydias & Batchelor So-Cal Speed Shop Special. Note that at the show the car was painted in black prime that was buffed out. The originally white car had had its nose crunched while backing up the trailer (it’s called a jack-knife) so it was fixed for the show. Later it went to Bonneville in this configuration. The motor was a 1948 Mercury with a 3 5/16 bore and a 4″ stroke courtesy of a ’49 Merc crank. Bobby Meeks put it together over at Vic Edelbrock’s shop and naturally used Edelbrock heads and a 3-carb intake manifold. It sported a Kong ignition made in the bathroom at Alex’s shop that he rented out to Kong (Jackson). No tranny is used and a hand-operated clutch links the motor to the Ford rear end. The 96″ wheel-based car is 15 feet long. Rex Burnette did the group that he rented out to Kong (Jackson). No tranny is our shining red race plane called “Little Tony” that’s also in the Circle of Champions (JMC_5576). The shot was taken at Van Nuys Airport before the San Fernando Valley had a population explosion. In the foreground are Fred “Spade” Carillo’s lakes and B-ville car. The blurb inside the magazine says that’s Harvey Haller in the car.

Here’s a shot of Road Runners member Fred Carillo’s completely rebuilt his ’49 Bonneville entry that was painted Purple and Chartreuse just like on the cover of the magazine (GGC_089). The Class C Modified Roadster ran at the May ’50 S.C.T.A. El Mirage meet and was powered by a ’34 Ford flattie of 239″. It ran 144.00 mph for a sixth in class. Later in its life it went to Daytona Beach painted the same for some speed runs (the same event that the So-Cal liner crashed at) and then Jack Stecker and partners repainted it black (they hated the colors) and used it for lakes and drag racing. They named the car the Black Widow and painted a red spider on the nose naturally. We got the illustration (JMC_5577).

To the left of the Liner in the main shot next to the easel is John Edgar’s HRD Vincent. At Bonneville in ‘48 after crashing the bike with an all envelope body, it was removed and ran again (JMC_5578). The rider is Rollie Free who also removed most of his clothes before going out and running 150.313 mph.

On the far left on our opening shot, we see the number 1 Kurtis-Kraft that just happened to win the 1950 Indianapolis 500. Our companion shot (JMC_4649) shows Johnny Parsons in the winning car at Indy. Looks like Firestone used one of the IMS shots and added a little advertising pitch to the bottom to use as a giveaway promotional piece. This one was severely folded and wrinkled before we brought it back to life for you.

We’re always looking for the un-obvious and think we’ve run across possibly more trivia for you. While scrounging through some old magazines we ran across this copy of Air Trails dated January 1952 (JMC_5535). One look at the chartreuse and red paint job and Wynn’s Friction Proofing decal says “Spade” Carillo knew about this aircraft since the ‘50 Hot Rod Expo. Our chartreuse number 16  was designed by Rodney Kreimendahl and Carl Ast.  It was piloted by John Paul Jones and qualified at the National Air Races in Detroit at a speed of 199.7 mph. The yellow number 1 on the left is the famous “Bonzo”, victor of many air races. The blue and white craft wore number 94 and was originally called “Ginny” but after considerable changes got the new name “Little Mike”. The next plane is red and might be “Little Tony”.

While we’re being flighty, on Saturday we went over to Glendale for the yearly Car Show held downtown. So many of the ‘50’s car designs were inspired by flying machines that we had to snap a few for you. First up it the tail feathers of a ‘55 Corvette (JMC_5578). A Cad Bullet from ‘59 would really fit nicely here. We couldn’t resist shooting what looks like a German V2 Rocket perched on the hood of a 1953 Oldsmobile (JMC_5579). Anyone want to go to the moon in it?

Vendors are always at shows these days and we found one that was selling an interesting product. If you go back to the middle ’50s there was a sponsor on television who sold a kit where you mixed a lot of colors together and you dipped a jar or some such item into it. upon removal, your item would have a wild paint pattern on it. Fast forward to the show and some enterprising folks have updated the concept to modern technology. Visualize a big fish tank without the fish but filled with water. On the surface floats a film with a wild pattern. Slowly dip an item through the film and into the water. It transfers to whatever you dunk into it. JMC_5580 shows you just one of the many patterns available that went on this valve cover. We think it’s cool.

Bob Barmore passed on a bunch of great stuff to us from a guy named Johnny Adams out of Texas. Johnny owned a speed shop in more than one town in the Lone Star State back in the early ’50s. Seems Johnny had built himself a Dyno in the early days and had corresponded with the great one himself, Isky, about purchasing it. BBC_016 is just one of the shots showing the unit that ended up not selling.

We’ve been plugging away at all the new Joe Henning materials we’ve received. Back in the mid-60’s Bill Neumann was the Editor of Rod & Custom and Rod & Custom Models and Henning did Editorial Design for both of them. We grabbed this shot of Bill’s famous roadster from ‘68 to show you what it looked like (NEU_561). R&C Models was one of those Petersen mags that didn’t stay around long but we just happened to have a copy of Volume one, Number 2 from July 1964 to share with you (JHC_1315). On the cover, we see a Don Emmons built the 1/8th scale replica of then  Editor Bill Neumann’s show winning Deuce using a Monogram Big Deuce kit. We know Bill’s real car was a Model A so the Deuce had to act as a stand-in but it still looks great gracing the cover.

If you dig out the July 1965 issue of Rod & Custom Magazine and check out the bottom photo on the cover you will discover more Joe’s work (JHC_1317). Inside he did a story on taking an AMT Indy Roadster model and mating its body to a Cox chassis and creating a “Slot Car for Diehards”. This 50-year-old original sketch was the inspiration for the slot’s paint job in that issue. Note the play on words that says Winn’s instead of Wynn’s as in Friction Proofing.

If you like whimsical rides you gotta check out our next shot (JHC_1318). This picture is from the Hurst Performance Products Press Kit for the 1964 Hurst Floor Shift Special Indy Car. The number 47 black and gold car was the brainchild of Henry “Smokey” Yunick from Daytona Beach, Florida. Brave sole Bobby Johns was assigned the driving chores and as predicted crashed the car on a qualifying run. Inside the press kit was all the hype in the world why the car should have worked, including details on the 75-pound remote control capsule that was the control room for Johns. Looks like George Hurst bought it.

Just to reassure you that Odd-ball rides are nothing new at Indy how about this. Lee Oldfield showed up at the Brickyard in 1937 with the first rear-engined entry ever. Not to be outdone, the next year Harry A. Miller and Preston Tucker sold Gulf-Oil Company a bill of goods and showed up with two of these radical machines for the ‘38 race (JHC_1319). Driver Ralph Hepburn looks back at Harry Miller leaning on the left rear wheel wearing a fedora. On the right in the dark suit with his wicker hat is Captain Eddie Rickenbacker who owned the Speedway at the time. Neither car made the race.

The fifties had of Frank, Joey, Dean, Sammy, and Pete as the Rat Pack. The new millennium’s got Kay, Pete, Glen, Bob, Ben, Bill and Joe to name a few as Pack Rats for the AHRF. You can’t beat that. Thanks, guys! 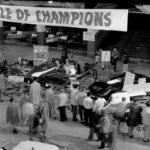 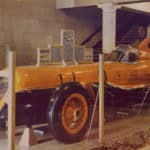 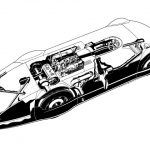 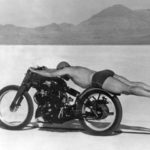 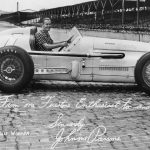 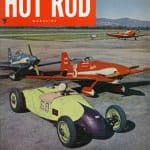 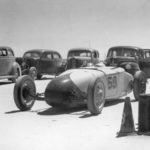 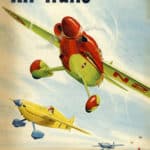 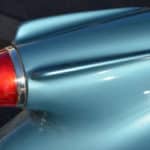 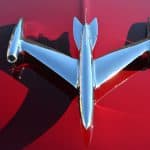 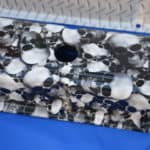 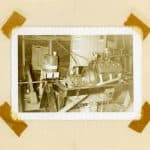 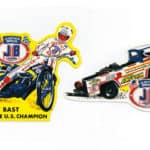 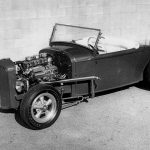 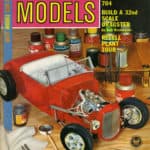 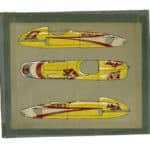 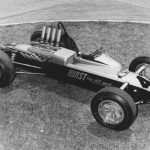 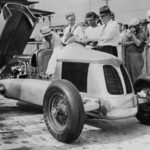