It looks like we’ve survived another Christmas. One tends to overeat and maybe have one too many beverages but we’re not complaining. For me, Christmas was also associated with race cars. Every December 24 as the family, aunts, uncles and assorted other friends, etc gathered at my Grandfathers house for a great feast, us throngs were treated with home movies. These weren’t your everyday run of the mill watch uncle Bob does a belly-flop in the pool kinda films, these were movies from the twenties that were taken on trips to Gilmore Stadium, the Lakes, Carrell Speedway as well as one too many garages filled with go-fast machines the word hooked doesn’t describe it properly. Needless to say, when you can still count your age with fingers, on one hand, it all leads up to being hooked on racing.

Last week we showed you some new finds in the photo department like a Hudson, a Packard, a Vette, an M.G and a Snake. We’ll continue down that road with our first shot of the day that shows the Parnelli Jones Enterprises brand new Parnelli Indy Car at Ontario Motor Speedway at what were guessing as a press launch (JMC_4523). The car was designed by Maurice Phillippe formerly of Lotus and the designer of the all-conquering Lotus 72. Note the dihedral canards on each side of the car that ended up not working on the beautifully designed car. There was a turbocharged Offy out back for power. Way out back we can see the drivers, Joe Leonard on the left, Al Unser in the middle and Mario Andretti on the right. In the upper right in the white shirt wearing shades is the teams chief mechanic, George Bignotti. This combination of owner-designer-chief mechanic-drivers was soon labeled “The Super-Team”.

The new cars made their race debut at Trenton International Speedway on April 23, 1972. By Indy time in May, the dihedrals were gone and the car featured canards on the nose and a wing out back. The cars raced for the first time at Ontario in a race called the California 500 held on September 3, 1 1 1972. Teammate Leonard driving the number 9 Sampsonite sponsored car was classified 16th after holing a piston. Unser drove the Viceroy sponsored number 4 and only lasted 27 laps before the throttle broke for a 31st. Mario in the number 5 Viceroy sponsored car was classified as 27 after blowing an engine.

Another find consisted of a few dozen prints of shots taken at Indy in ‘49 that were all downright bad. JMC_4518 shows what we started with and what we could do to save it. All the hilites in these shots were blown out and it’s a bear to add something that wasn’t originally there. If we had the negs that would be a different story but the prints are all we know that exists. The car is a special one and was called the Rounds Rocket. Note the engine was located behind driver Bill Taylor. Legendary fabricator Emil Diedt built it. Too many new concepts, way to complicated and not fast enough were its problem. It was back in ‘50 with more mods and some hot shoe named Billy Vukovich couldn’t make it fast enough either.

Last week we showed you a Custom Darin Packard from ‘42. Let’s move ahead to ‘44 and show you another custom in the form of a drawing from a Bohn Advertisement (JMC_4860). By donning ones way-back cap you will remember that Bohn is actually Bohn Aluminum & Brass Corporation out of Detroit. They were the folks who got together with Henry Ford and made aluminum heads, oil pans and pistons for a ride we ended up calling the Deuce. In this ad, Bohn was showing how aluminum castings would be the perfect solution to adding bright-work to a car.

A back story about the ad. It’s from Fortune magazine. It was acquired back in 1970 at an ice-cream store in Manhattan Beach with about 100 other Fortunes. They cost seventy-five cents each and were all ripped up for the Covers and Ads.

That’s a good lead into our pal Joe Henning who was working at Rod & Custom at the time. He did this drawing for a story called “The Revolt of Mamie Stovebolt” that ran in the April ’57 issue (JHC_143). It shows what a ’42-’48 Chevy could look like with a little imagination. Joe was poking fun at the trend of just adding tons of chrome and multi-tone paint ala Barris to your ride to give it some razzle-dazzle. If you look at customs five years earlier it was dump all the bright stuff so you could see your cars sensual lines.

Our next shot goes to the opposite extreme of the chrome chariot (JMC_1919). We see the tail of a Kaiser-Frazier that is definitely slick and rides real low. The back window looks like it was donated by a Ford shoebox but the arches in the front window give away her heritage. That’s the great thing about customs, it’s the ultimate canvas for real artists. All we need now is a six-pack and the whereabouts of the next Dutch of Jefferies or Roth to keep the evolution going. Shot at the Grand National Roadster show in 2011.

On December 24th as I was heading out to spread some good cheer the U.S. Postal Service delivered yet another present from our pal Jere Sheehan. Inside were more to die for goodies. Take JSC_037 for example. This pristine program was from the Second Annual International Auto Show and Motorcade of 1953 (what a name) that took place from December 8 to 14, 1952. Besides featuring Cars of the World. the Packard on the Cover, A Cunningham, Antique, and Race Cars you could partake in a Hayloft Jamboree daily and check out the girls in a nightly Fashion Show. You could also visit the Paul Revere Hall and see Indy and Bonneville movies.

In Jere’s package, we also received a couple of Volume 1 issues from 1960 of a   publication called National Dragster. Every story in them was filled with hot rod history. Better yet were some of the ads. JSC_038 is for Pat Bilbow’s Lynwood Welding Company that just so happened to specialize in building Dragster Chassis. We had never heard of them before. How about a chassis for $290? I’ll take two. The pix was way too small in the ad for these eyes so why not blow it up. We did (JMC_039). You don’t see a lot of just chassis pix from the early days outside of DDragmaster and Scotty Fenn’s so this one will go a long way in helping us document rail job evolution.

If you think getting a package on the 24th was cool you should see what we got on the 26th. Inside was a note that basically read— I took these pictures around ‘46-’47, it was quite a deal to drive up to the lakes, a couple hundred miles. We were just spectators. Hope these pictures show how the cars were then. Martin Kocher.  Inside were 44 great photographs. Thanks so much to Martin for sharing our early hot rod world.

His first shot for today (MKC_001) shows Steve Genardini of the Gophers Car Club waiting in line to run at El Mirage on April 28, 1946. His Merc powered deuce was fitted with Edelbrock Heads and ran a credible 122.61 mph to cop fourth in the Roadster Class. Behind Steve’s ride is the number 150 roadster of Outriders member Manuel Ayulo. Manny’s Deuce had a Merc under the hood fitted with Meyer heads. He ran 113.92 mph. Behind Ayulo is Low Flyer member Howard Wilson’s Modified powered by a Ford B. Howard ran 118.42 mph this day. Not the bald tire in the foreground. Ayulo went on to drive at Indy and Wilson was behind the wheel of Stu Hilborn’s car on that day when it became the first 150 mph record holder at the lakes.

Bet ya didn’t know a roadster raced an aircraft at El Mirage did ya? All we can tell you about this unbelievable shot was that it was taken on May 25, 1947 at El Mirage. We can’t identify the roadster (bummer) but a note on the back of the shot said Fairchild. We did a little snooping and think this is a Fairchild Model PT-19 that was powered by a 175 hp Ranger L-440 6-cylinder engine. We found 1,270 were built. It was a little over 27 feet long and topped out at 124 mph. Let’s see, the fastest B Roadster that day was Frank Coon at 125.52 mph, the fastest B Roadster that day was Doug Hartelt at 126.05 mph and the fastest D Roadster was Don Blair at 127.65 mph. Looks like our roadster boys were indeed faster than this WWII Trainer.

In other shots from Martin there were a couple of aircraft parked on the lakebed and another showed one about 20’ off the deck (it was a flying car). We know that some of the racers were also flyers in WWII so toys with wings and toys with motors naturally go together.

That’s a good excuse to show you another recent find (JMC_4519). Volume 2, number 10 of Flying was published on December on December 3, 1938. On the cover is a great drawing by Howard Leigh of a Blackburn B-24 Skua (never heard of it). The craft was a carrier-based cross between a dive bomber and a fighter (sounds like a hot rod to me). It was designed in the mid ’30 and saw action in the early part of WWII. It was manufactured by the Blackburn Aircraft Company and had its first flight on February 9, 1937 and came online in November 1938 just before our cover. It was pulled from frontline service in ’41 and retired from all duties in March ’45. 192 of the craft were built. The artist Howard Leigh was born in Kentucky in 1896. He graduated from Harvard medical school, disc at Indianapolis Motor Speedway. Needless to say, when you can still count your age with fingers on one hand, it all leads up to being hooked on racing. If you through in trips to Gilmore Stadium, the Lakes, Carrell Speedway, as well as one to many garages filled with go-fast machines the word hooked, doesn’t describe it properly.

Howard was such a good artist that we used him as a setup for another fantastic illustrator of the car type, Eldon Snapp. (JMC_4526). This section of Eldon’s drawing was at the end of 44 foot long scroll that he had originally done for the S.C.T.A.’s 50th Anniversary Banquet back on January 23, 1988. His last notation in 1990 touts Al Teague and his iconic streamlined that ran over 400 mph more than once. Eldon was a sign painter and also the first art director of the S.C.T.A. Racing News before WWII. All his drawings graced their covers in the early years. He was also responsible for Winged Wheel logo that the S.C.T.A. uses till this day. Bravo!

Out with the old and in with the new has been synonymous with racing since day one. It’s a good thing the driver missed because we still have stacks of pictures to do for you. 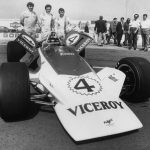 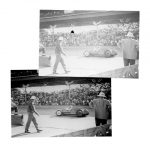 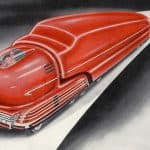 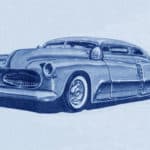 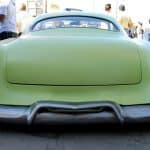 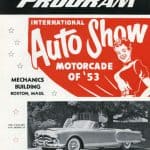 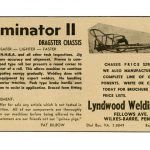 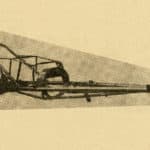 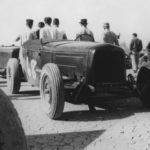 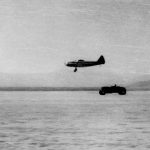 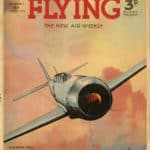 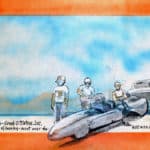