While doing research the last couple of weeks on the First NHRA National Drags held in ‘55 and the Edna, Kansas drag race in ‘54 we ended up digging out our old Hot Rod magazines to get a handle on how the early drag race Regional and Nationals event thing got started and also to learn more about the Safety Safari. Like Santa, we’re makin’ a list and checkin’ it twice so we can pass on what we’ve discovered to you.

Somehow we always have some holes in the magazine collection so we made a phone call to our go-to guy in this department and filled in the missing issues. Our first image today (JMC_4630) is the not missing anymore December ‘55 issue of Hot Rod that has a story on the ‘55 Nationals drag event. The pictures and copy in the story have helped us fill in more holes. As to the great looking Deuce on the cover, it belonged to Don Van Hoff of the Aristocrats Car Club that he put together while in High School. The lid has been lowered 2 1/2″ and under the hood is a Merc flattie with four 97’s on top. It sure would look good in our garage.

For our next act, MSL_012 is one of the snapshots that was taken at Great Bend during the first NHRA Nationals in ‘55. We identified the car as being entered by Bart and Helen Root from Norwalk, California. We checked our files and found that Helen had been tearing up Southern California tracks as the car’s shoe and in Great Bend, she had made it all the way to the final elimination run in Class C Street Roadster before being eliminated by Dale Ham with a speed of 91.64 mph. In our digging, we also discovered that this car was featured on the cover of the July ’55 issue of Hot Rod and a story on it inside. So, under those smooth hood side panels of Helen’s grocery getter was a 259″ ’38 Ford block that was fitted with a Merc crank, Sharp heads and three ’97’s. This is another car for our garage.

A lot of early-day rods were also used as daily drivers by their owners and that got us to looking for others of the same ilk. This 1941 shot shows Milers member Bob Corbett’s banger powered roadster-pickup parked next to the Gopher Grill (DOT_673). Out came our old phone book so we could tell you that the eatery was located at 7722 Santa Monica Boulevard. That’s just four blocks east of Fairfax on the corner of Spalding and within a half-mile radius of about half a dozen other pre-war dry lakes race clubs. Bob’s car is wearing its race number from the August 24 S.C.T.A. lakes meet held at Muroc. No speed was listed in our results.

If we go the next step, some all-out race cars were even put on the street back in the day. This Studebaker powered car first showed up at Indy in 1932 and featured a Herman Rigling chassis. By 1937 when this picture was snapped it was still basically unmolested and had the same 336” Studie straight-8 in it. Entered by Phil Sanders’ S.S. Engineering Company as the Sobonite Plastics Special and painted maroon, it was driven by Louie Tomai with mechanic John Peck riding shotgun. They put the car in the race with a speed of 116.437 mph for an 18th place start position and finished all 200 laps for a 10th place finish. In our research, we discovered that Virgil Exner had bought the car in the early ’40s for $500 from Sanders and turned it into a daily driver. Exner played with it for years before he sold the car in ’49. Studebaker, the Company, tracked it down and bought it in ’52.

We’re always rummaging through our stash of old magazines trying to find long lost tidbits of info. Up popped Volume 1, Number 4 of Cars (JMC_4632), The New and Different Automotive Magazine that was brought to us by the gent who created “Captain Billy’s Whiz Bang” about a century ago and built an empire called Fawcett Publications. On the cover of this July 1953 issue is Chrysler engineer Lucille Pieti showing of the svelte body lines (easy guys) of the Virgil Exner designed, Ghia bodied, K-310 Sport Coupe. In our files, we also just happened to have a copy of a 1952 Auto Show giveaway of the same car (JMC_3722).

Not long after the above Chrysler Hemi-powered ride was built Exner and Ghia in Italy started turning out dream cars you could buy by the dozens. One of the creations was the ‘53 D’Elegance. Felice Boano (later famous for some wild Ferrari bodies) and part owner of Ghia at the time had just gotten a contract to design a new body for Volkswagen. Long story short, the VW Karmen Ghia was the result and it looked just like the D’Elegance from the side. Take one American designed car, through in some Italian flair, some Teutonic precision and then let a hot rodder and Bonneville racer get a hold of it and lookout. You won’t find many Karman-Ghia’s as wild as this one (DOT_801). The Benham & Watkins Class F Comp Coupe and Sedan entry is spied a Bonneville waiting for a run back in 1981. The Ron Benham built dub had a slammed lid and a 1442cc Turbo’d Fiat hanging out back. Driver Don Watkins did his best but could only manage a lap at 140.427 mph against competitor Ralph Seth’s 160.370 mph qualifier on a 142.589 mph record. We like the Gulf Oil color scheme. Up front Ron pirated the nose off an Opel GT. The bike on the right wearing number 45A is Les Ranger’s “Rangers Nitro Express” Honda. He qualified at 180.288 mph on a 153.228 mph record and went home with a new one at 164.073 mph.

We search our hard drive all the time when researching a particular subject and some interesting things always pop up that aren’t related to what we were searching for. Case in point is our next shot, CKC_001. This one was out of a Scrapbook that was put together in the early ’30s by a fan of race driver Arvol Brunmier. It shows some pit action in the year 1930 at Legion Ascot Speedway. The car is called the Imperial Special and was owned and driven by Curly Grandel. In our identifying process, we were lost as car number 82 was used in different years until we saw the Dayton Thoroughbred logo on some shirts in the background which honed us into the year 1930 and a car ID.

This next shot is another non-search match that is also way cool and full of great ideas for your next street rod build (CKC_774). For the 1936 Indy 500, Overton “Bunny” Philips out of Pasadena, California entered this supercharged Bugatti that is seen in one of Indy’s Gasoline Alleyyges” stripped of its bodywork. Luther Johnson was selected to drive the car that wore number 49 on the side of it. He never attempted to qualify the car. Master builders like Steve Moal use reference material like this all the time for inspiration. Just look outside your comfort zone and you’ll find all sorts of great ideas. In this case, the distributor was actually a working item that you could adjust while in a race.

If you think these foreign jobs have no place in the hot rod world you’ve missed the boat. Our next shot shows car number 331 run by Knox Allen of the Lancers (HEY_054). He teamed up with Bob Cox and someone named Daniel during the 1940 lakes season with this Winfield-headed banger-powered Modified at the May 19th and August 18th races. The year before Knox had driven the same car off course at Rosamond and into a barbed wire fence that caught him in the neck. Luckily he survived. The grill shell and radiator are off one of those funny French cars called a Bugatti like “Bunny’s” above. No speed is Known.

Here’s another weirdo car that ran at the lakes in 1941 (LWJ_042). This one belonged to Hollywood Throttlers club member Ted Cannon and ran in the Unlimited Class. The engine is a Marmon V-16 that displaced 490.8” and put out 200 hp in stock form. Yes, it was quick, on August 24th Ted “only” ran 128 mph. The next month he ran a slower 113.49 mph. Note how well the driver is not protected. After the war, Ted set up shop in North Hollywood and became a driveline specialist. In his spare time, he built chassis’ for Doc Boyce-Smith’s Glaspar cars and his own racing sports cars.

In the “Cars” magazine above we ran across an illustrsis’ for Doc Boycation of a vehicle called the Ford XL-500 (JMC_4631). A little digging revealed that it wasn’t really a Ford but was actually a Lincoln-Mercury show car that was originally named the Phantom. It was also the first post-WWII show car to carry the Lincoln name. The all fiberglass car was painted Scarlet Red and built on a 123″ Lincoln chassis and was basically a shell as the doors, hood, etc were just grooves carved in the body. To get in the thing you had to climb through the window. The car bristled with styling ideas that made their way onto many Ford built automobiles over the next half-decade like the Merc lids over the headlights and the Victoria chrome strip over the roof not to mention push buttons in the center of the steering wheel that made it to the Edsel. We added some color to simulate the way it was originally painted and why it was a real head-turner. For the full story on the car, all you have to do is find a copy of “Ford Design Department Concept and Show Cars 1932-196ow Cars 1932-196932-1961” that was published back in 1999. Good Luck.

Leave it to rodder types to have a little fun at the expense of serious stylists (JHC_089). This Joe Henning drawing appeared in Rod & Custom Magazine back in September 1957 and was called the B.A.T. 34.5 or Belfriano Automotica Terrifica. It was a spoof on the now famous and million-dollar series of Alfa-Romeo design exercises created by Bertone that also used B.A.T. (Berlinetta Aerodinamica Tecnica) for their names. We need a big garage now!

So much for good and bad design and weird cars this week. Later. 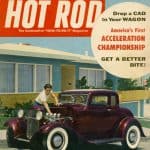 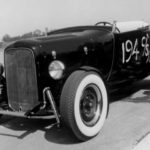 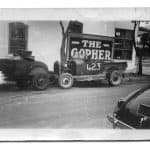 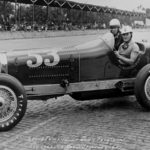 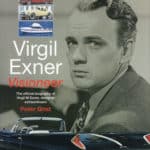 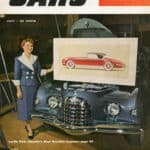 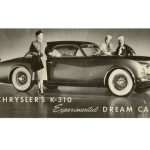 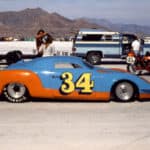 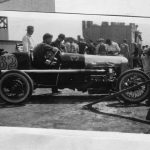 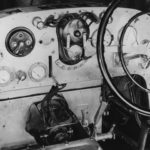 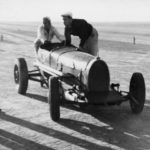 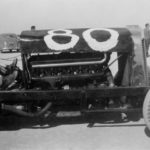 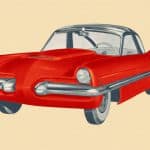 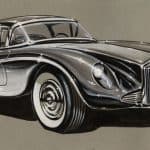 Previous Post: « From a Wing-Tank to a Rocket-Deuce with a Capsule in Between
Next Post: Thank You U.S. Mail »
↑ Top of Page