This last week we finished scanning all of Josh Mishler’s 95 drag race shots that he has lent us. On Tuesday night it was take in the monthly Sidewinders Car Club meeting and on Wednesday morning it was bop over to the Trompers Car Club meeting. Thursday it was search for some more rare photos (we found some good ones) and then spend to much time on the phone. Being the masochist’s that we are during the day on Friday it was off to the Pomona Fairgrounds to take in a little bit of the 2014 NHRA Winternational Drag Races. That night it was off to the monthly S.C.T.A. and BNI Board meetings. As you can see, sometimes it’s hard to get things done around here but it sure beats watching some crummy show on TV.

Let’s start out by looking at a couple of shots from Josh’s collection. Dave Waldo out of Kansas City, Kansas was the owner of this slick looking chopped Deuce 3-window (MSL_028). Thanks to our newly received listings of competitors from the First NHRA Nationals at Great Bend, Kansas in ‘55, we not only were able to connect the car with Mr. Waldo but can now tell you that under the hood lurked a ’47 Mercury flathead. Now, all we have to do is come up with some results so we can pass on some times and speeds.

In our next shot we see another roadster that made the trek to Great Bend in ’55 (MSL_034). This one belongs to Jimmy Dickson out of Kansas City, Kansas. The car ran in Class B Street Roadster and was powered by a ’48 Merc flattie. Again no speed is known, yet.

To make our lives even more up-side-down along with the ‘55 Great Bend shots we also   photos taken at Edna, Kansas in August 1954 during one of the NHRA Safety Safari tours that stopped at the track (MSL_064. The Model A roadster in the background was owned and raced by Joe and George Hall out of Wichita, Kansas. They were the owners of Hall’s Speed Shop and proudly display their shop’s name on the side of the car. By the way, Hall’s Speed Shop still exists and run by new owners. The Henry J in the center also carries a race number on the window so wish us luck on finding anything on this track or competitors.

If you think Edna is going to be a tough info find, check out our last Josh shot for the day (MSL_088). All we have to go on at the moment is that this color slide of this more than a bit altered Class B Modified Roadster was dated February 1959.

Let’s jump in our time machine and leave the ‘50’s and head for more modern drag races like the ones held this last weekend. Our trusty old camera got a workout on Friday so let’s have a look at some of what we captured for you.

After walking at least a quarter-mile in the Fairplex parking lot to get to the ticket stand, we finally made it inside and put the camera to work immediately. JMC_4945 shows one of its first snaps that captured Gary Cooke’s flamed ’61 Corvette from Mission Viejo, California. Gary’s car runs in Super Gas and is powered by a little 565″ Chevy. It’s heading to the staging lanes Friday morning for the first round of qualifying. At the end of the round, Gary was down in 30th position having run 9.876 or .024 seconds quicker than the established 9.900 breakout time. On Saturday Gary went on to win round two and also round three. In round four Gary lost to Peter Bothe by just .006 seconds.

After shooting a hundred or so shots in the staging area it was time to start working the pit area and see what we could find of interest for you. It didn’t take us long to find this lovely lady wrenching on Jack Beckman’s Valvoline Dodge Funnycar team (JMC_4953). WOW, how does one go about getting a job on Jack’s team? In the first qualifying round, Mr. B went head to head with Cruz Pedregon. They both had trouble as Cruz ran 6.708 at 95.56 mph and Jack ran 7.520 at 77.87 mph and ended up in 13th place. In the second round, Jack faced Ron Capps. Jack had a good leave and at the 330 lights, the engine went bang so he coasted through at 5.490 and a painful 103.74 mph. He was now in 16 place. Round three on Saturday wasn’t any better as he smokes the tires off the line and coasts through at 7.629 turning 78.19 mph. He was now down in 20th spot. In round four things started to come together. Jack ran 4.049 at 312.86 mph to beat Bob Bode and hoisted himself to 8th spot. On Sunday in the first Elimination Round Jack faced off with Tommy Johnson Jr. and ran 4.071 at 309.56 mph against Tommy’s 4.048 at 320.81 mph. That was the end of his racing for this meet.

After shooting our babe and a bunch more stuff it was hoof it time again over towards the grandstands. After a few dozen steps a double-take was required. Taking a page from the IRL playbook, Frank Hawley’s Drag Racing School brought its side by side dragster to Pomona and gave some rides to more than one willing victim (JMC_4955). A quick internet check reveals that Frank has set up at least 28 classes for the year 2014 at various tracks around the country and has just added Fontana to his list.

We made it to the grand-stand area just as some Top Fuelers were exiting the track headed for their pits. TJMC_4977 shows Brittany Force’s car being towed back to its pits after a first-round qualifying run. Brittany had faced off with Terry McMillen and ran 3.916 at 279.15 mph against his 3.863 at 322.58 mph for a 12th place finish. In the first round eliminations on Sunday Brittany faced Richie Crampton and lost with a 4.617 at 279.50 mph against his 3.747 at 322.88 mph. The chassis is a 2012 McKinney and runs one her dad’s 500″ Fords and features an enclosed safety cell for the driver.

Being that there is never enough room to show you every shot “right now” we put together the next two shots (JMC_4985 and JMC_4986) to give you a little taste of the action. Enjoy! 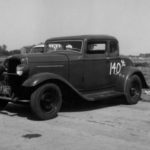 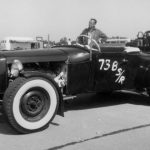 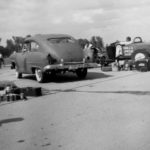 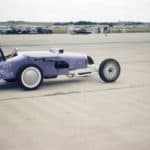 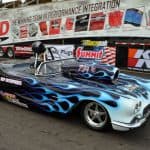 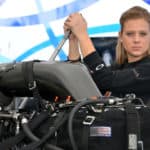 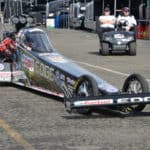 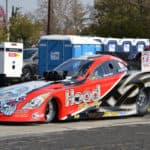 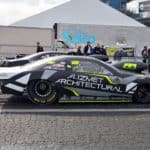 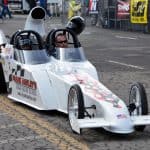 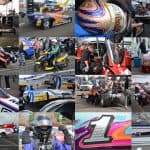 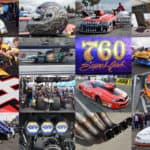 Previous Post: « From the Lakes to the Drags and back in the same issue
Next Post: Odds and Wins »
↑ Top of Page