From day to day one never knows what interesting thing is going to happen around the AHRF. Let’s take last Monday for example when I received a phone call from Richard Parks asking if I would like to attend the premiere of a new movie the next day. Being the news hound that I am the answer was yes. The next day we firmed up the time, place etc and would meet later that day.

Real movies have to Premiere in only one place and that’s Hollyweird, and what better place than Sid Graumin’s Egyptian Theatre to see was titled Snake & Mongoose and I bet you’ve already guessed what it was about. That’s right, it was the tale of two of Drag Racing’s most celebrated shoes, Don “The Snake” Prudhomme and Tom “The Mongoose” McEwen.

Let’s sneak in a shot here to set up the location before the action went wild (JMC_4342).

Naturally, there was a red carpet and more than one celeb showed up to walk the crimson trail. The first heroes to show were “TV” Tommy Ivo followed by Ed Pink and then a zillion people showed from nowhere, Actors, Actresses and our shoes Don and Tom. I felt like some kind of Paparazzi trying to sneak a shot for the cover of People Magazine amongst a hoard of other shooters.

Here’s one that came out showing our real and the make-believe shoes on the red carpet before the movie started (JMC_4343). From the left is Tom “The Mongoose McEwen flanked by actor Richard Blake who portrayed him. Then comes Jesse Williams who played the Snake standing next to real Snake, Don Prudhomme. Flashbulbs popped (figuratively speaking) and their faces lit up

As for the movie, I was blown away with all the old footage they found of our heroes from back in the day. It also filled in a lot of holes on their early racing activities, home life and showed McEwen’s brilliance of lateral thinking with the Hot Wheels sponsorship deal. Best of all it showed their passion for being the best they could be behind the wheel. If you’re a drag race fan, you have to see this movie.

During the middle of the week, we spent most of our time converting a bunch of our lateral thinking with the Hot Wheels sponsorship deal. Best of all it showed their passion for being the best they could be behind the wheel. If you’re a drag race fan, you have to see this movie.

During the middle of the week, we spent most of our time converting a bunch of our big Marty Clampitt scans into jpgs for posting to the sight. Here are a couple to whet your appetite.

First up is CLA_137 that shows Pete Dean of the San Diego Roadster Club and his repurposed drag-race machine that he entered at the October 16, 1966, El Mirage lakes meet. Running as car number 2 instead of 77 in Class A Modified Roadster, Pete, who was after the 175 mph minimum record, went away with a new record at 181.08 mph. Needless to say, he was a happy camper.

Marty just happened to stop off at a Hot Rod and Custom Car Show in Bakersfield and snapped a few ditties. One of them is CLA_143 that shows a wildly customized bike called Moonglow surrounded by spotlights and the obligatory for the day Angel Hair decoration. In the background, you can see the whacky ‘23 T called Tweetie Pie that was then owned by Ed Roth. We’re guessing this is ‘60 or ‘61 at this time.

After sitting for a couple of days playing with jpgs it was time to make a visit to my favorite paper merchant and see what he had laying around that we couldn’t live without. Five new old magazines cam home with us along with discovering some pre-WWII, pre S.C.T.A. dry lakes race results that will be looked at more closely next week.

We’re suckers for customs and this illustration (JMC_4344) from the cover of the July 1954 issue of Auto Age Magazine features the work of Dan Todd. The vehicle is the 1954 Buick Wildcat II showcar. The body was constructed of fiberglass that featured flying front wings (fenders) that covered a shortened production car chassis. It even had one of those nailheads under the hood. Way cool.

After being hooked on Salt Flat racing at an early age any vehicle that appeared to have a streamlined body was automatically on my list as a potential Bonneville Streamliner (JMC_4345). This cool Jesse Alexander shot from the March 1956 issue of Auto Age shows Edgar Barth at the Nurburgring on August 28, 1955, during round three of the German Sportscar Championship in a ride that met my Streamliner specifications. The car is the East Gew Nailheads under the hood. Way cool.

After being hooked on Salt Flat racing at an early age any vehicle that appeared to have a streamlined body was automatically on my list as a potential Bonneville Streamliner (JMC_4345). This cool Jesse Alexander shot from the March 1956 issue of Auto Age shows Edgar Barth at the Nurburgring on August 28, 1955, during round three of the German Sportscar Championship in a ride that met my Streamliner specifications. The car is the East German built EMW R3-55 powered by a 1.5 litre inline-6 that put out 155 hp at 7,000 rpm and was good for 155 mph. The car finished third overall with Barth and Arthur Rosenhammer sharing driving duties. At the time this photo was taken the Class O B-ville liner record stood at 136.90 mph so this car could have become its caretaker. It wasn’t far off the larger Class A record that the So-Cal liner held at 162.950 mph so It would have definitely turned heads and had tongues wagging if it had shown.

Being that we never sleep around the AHRF, Saturday required a trip up to Ventura to attend the Ventura Nationals that I still refer to as the Primer nationals. There were tons of cool cars, tatted up folks and live bands plying their trade. There are also new to us rides that deserve to be shot, some by guns but most by our camera. Let’s have a look at a few.

JMC_4349 shows an old custom stand-by, the ‘50-’51 Chevrolet Bel-Air that I will call a Chevy Low Rider. It’s pretty mild in the alts department featuring ‘55 Olds headlight rings and what looks like ‘47-’53 Buick Teeth. What’s amazing is the never-ending wilder and wilder paint schemes that keep showing up on these puppies.

Not far from the Chevy we spotted the wildest ride of the event in our minds and it happened to be a Scoot (most normal folks would call it a Motorcycle). This one was put together by the “Detroit Bros. out of Ferndale Michigan. It featured a 121″ Total Performance powerplant and almost everything on the bike was custom made by the Bros. All I can say is dig those crazy pipes and nice job guys.

Not far away from the Scoot we spotted another head-turner in the guise of a hardly recognizable ’55 Ford. It wears headlights rings off a ’56 Olds with fenders peaked to match and the grillbar is from a ’55 Plymouth that fits nicely in the reworked front opening. The simple yellow-gold scallops work great with the dark green. All that’s missing is some linework where the colors meet.

Ratsters keep getting more outrageous all the time and this one piqued our interest. It looks like a ‘40 (most likely Chevy) GM coupe body that underwent some proportion changes. It sits on a more or less conventional chassis with beam axle up front. What’s interesting is the foreword location of the rear axle (kinda like the AFX’ers of the ‘60’s) and the lack of a lower rear body. Looks like innovation is still alive and well. Our bud on the door and the deck lid are au-natural rust while grey-black primer protects? the rest. 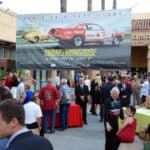 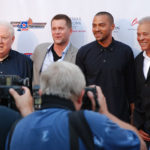 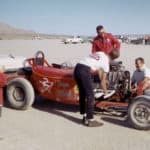 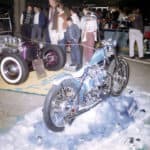 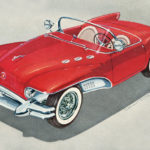 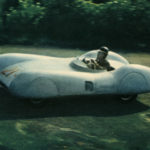 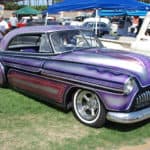 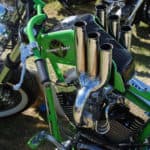 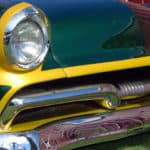 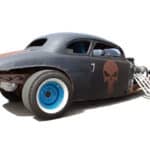