Let’s just say it’s hard to get anything done when you’re never at home. A quick recap goes something like this. Monday was clean up the piles of junk that somehow collects on one’s desk. That involved going through every yellow sticky that somehow never gets thrown away to make sure you’re not tossing something important. It also involved scanning all those ticket stubs, patches, pins and important small pieces of memorabilia that appear out of nowhere. Just when you think you’re making headway the mail arrives and inside that brown envelope are some more goodies. Our bud Jere Sheehan sent more goodies from the early days of drag racing so we ended up scanning them too as you will see later in the story. With a somewhat cleaner desk, Tuesday morning was a good time to dig out some old 35mm negatives. The sleeves holding them were all beat up so off to the camera store to get some new ones. Before you know it, it’s time to take off for the Sidewinder Club Meeting. Wednesday was scan some of those old negs. Thursday was decision day, work at home or drive out to Pomona and work taking pictures of hundreds of drag machines that had just shown up for the NHRA Auto Club Finals. Hello Pomona. Friday was a similar scenario but this time it was get in the car and head to El Mirage for the last S.C.T.A. meet of the year. Friday was inspection day and Saturday and Sunday were race days. Enough of the jabbering, let’s look at some pictures.

Let’s start with some race car shots from Pomona. First up is JMC_4489.  We see the body of Doug Gordon’s Top Alcohol Funny Car used during the 49th Annual Finals. It was sitting in the teams Morrow Bay Cabinets Racing pit area while the team readies the 528″ Fontana powerplant and chassis for the first round of preliminary qualifying. The body is supposed to be a ’06 Monte Carlo. The fancy graphic is a wrap. This was just one of a gaggle of about 15 littering the isles while crews thrashed to make their cars race-worthy.

It’s always fun to visit the pre-stage are and let the cars come to you instead of having to walk up and down miles of pit roads. JMC_4490 was towed up with a little quad right when I arrived so snapping started at once. John Edwards from LaVerne, CA gives us a big smile after having just climbed into his number 610 Class C/AA Dodge before taking his first lap on Thursday. The body replicates a ’99 Neon and is powered by a 374″ Dodge. It’s sponsored by the Edwards Brothers & Watters.

A minute or so later up pulls Piedmont Alabama’s David Rampy and his slick looking Class A/EA Comp machine (JMC_4491). Our camera went snap a few times before Dave’s first lap down the quarter-mile. The machine runs a ’32 Bantam body and 323″ Chevy motor and is sponsored by Skillman Chevrolet/Elite.

Let’s head off to El Mirage now. JMC_4493 shows you one of the great drawing cards to that little old dry lake. We see the sun rising Saturday morning before the S.C.T.A. races began. The car is Dennis Mariani’s beautiful Modified Roadster. Dennis didn’t have any luck on Saturday, but on Sunday he went on to up the Class E Blown Gas Modified class Record and went home with a smile on his face.

AHRF contributor Mike Littlefield showed up at the November 2013 Two-day S.C.T.A. meet with his newly refurbished Class B Street Roadster (JMC_4494). Mike ran the car in the ’80s and ’90s and retired it to collect dust for almost a decade and a half. For the last few years, many hours have been spent transforming the car into the beauty it is now. He breezed through Tech, went through rookie orientation and successfully completed a run without the car into the beauty it is now. Needless to say, he was all smiles. Behind is the silver number 8080 streamlined sidecar motorcycle run by Tim Cunha.

The best part of S.C.T.A. racing is it’s the playground for the unusual. Long-time drag racer Al Eshenbaugh brought his Steinegger & Eshenbaugh 4-cylinder Hemi-powered lakester to Mirage to have a little fun (JMC_4496). The former Hemi-V8 motorsports one cylinder head, a special 4-cylinder crankshaft, and a plate over the un-used cylinders in the right bank.  The plugs in the right bank fire because Al runs an 8-cylinder mag. Earlier in the year, he had a banger Toyota in the car running on Nitro. Go Al.

Since we’re on El Mirage I have to report that there was a crash on Sunday. Brian Gillespie driving the Hasport Hondata Class G Blown Gas Modified Sports that started life as a Honda Insight got sideways, went over more than once and ended up destroying itself. He definitely got his bell rung but the good news is Brian is alive and well at this time. On Saturday he had driven the car through the lights at 200.09 mph to become a new member of the El Mirage 200 MPH Club.

Earlier I mentioned some old 35 mm negs that were doing right now. As we know scanning the old stuff is really challenging and the batch we’re doing now falls in that category. DCC_307 shows you what we’re up against after we spend time cleaning the image. This image contains three scans of the same image. In the upper left, we see the neg scanned without any manipulation on our part. The film was overexposed so we have to go in and add density to the highlights (the light area). When you add density to the light areas you also add density to the dark areas (the shadow area). You can play with the balance a little bit. The upper right shot shows how we’ve added a lot of density to the light area. You can also see the dark areas got darker too. Think of it as like when it’s really bright outside and you squint your eyes. Now notice just like your eyes that the edges get even darker. Note that all the edges get darker and you can even see the sprocket holes are casting shadows. Once you find a happy medium between dark and light you can now scan the negative. The bottom is the final scan that we have gone in and retouched out the dark edges and readjusted the light and dark areas multiple times to get a better relationship between the light and dark. At this time we retouch out the scratches and spots in the film. When all this is done we add a little contrast while trying to keep some tone in the light areas. It can take from 20 to 40 minutes to save each image.

Here are a couple of shots from the same roll of film that we tried to work some magic on (DCC_301 and DCC_303). Cluess from these shots and others on the roll say the pictures were taken in 1947. We then went to our programs and results for the year and come up with a dead end as to who some of the cars belong to. Our mission, as Spock would say, is to find out who the missing players are before we’re beamed up

Inside the brown envelope from Jere Sheehan were some great puzzle-solving pieced. JSC_025 shows an AHRA and NHRA booklet that helps us understand the year 1963 much better. 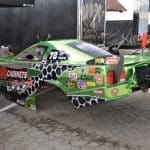 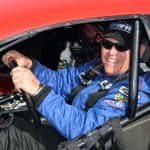 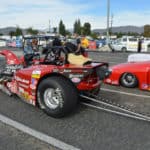 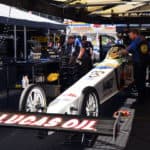 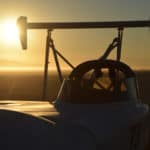 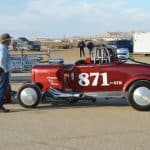 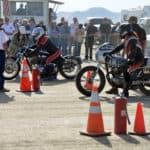 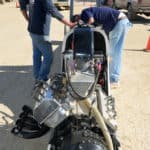 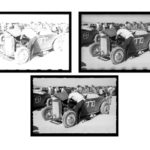 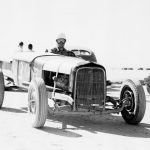 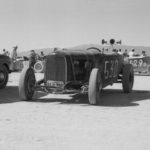 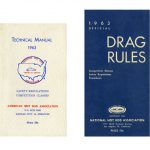 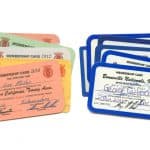