As you may have noticed the AHRF website has had more than its share of problems. If it were a car we could have gone in an changed a fuel pump or spark plug or done an overhaul on the five-speed trans and been up an running in no time. Not so with web sites.

Seems every time there is a software update everything that ran great in the old version doesn’t seem to work with the latest off the shelf version. As of now, we’re trying to get the site up and running and work out the glitches. We’ll pretend it’s a new Racepak speak se right front and some ride height sensors on all fours and let’s not forget the EGT’s for every one of our 16 cylinders. Once we know they work then we can fine-tune the results.

We should also like to say thanks for being patient with us.

We just missed what they call the Greatest Spectacle in Racing so we thought it would be fitting to show you a few of the rides that have run in the 500 over the years. Hope you enjoy them as much as we do. All these shots except the last one for today’s story were acquired in the last month or so from our pal Joe Henning. There were approximately 850 rare shots that we had to scan, so kudos to Joe.

First up we see Riley Brett behind the wheel of one of two rides he built for the 1921 Indianapolis race called the Junior Special (JHC_424). The car was entered by George Wade of Kansas City and C. L. Richards also from Kansas City, Mo. fronted the bucks to build them. Riley ordered chassis’ from Harry Miller and put together two of his own DOHC inline 6’s displacing 179″ for power. Riley drove this grey and yet to be numbered 17 car with riding mechanic Herschel McKee to a16th place qualifier after averaging 87.70 mph. In the race, Riley encountered steering problems, wore himself out and pitted. Relief driver Harry Thicksten took over and didn’t complete a lap before smacking the wall. They were awarded a 15th place finish after completing 91 laps. Riley would be involved with speedway rides for years after his driving stint.

After winning the 1926 AAA National Championship Harry Hartz got to wear the coveted number one on the side of his 1927 ride (JHC_429). We see him (and the old Pagoda) at Indy in ’27. He’s behind the wheel of his Erskine-Miller inside the Gasoline Alley fence. The front wheel drive car was powered by a straight-8 Miller displacing 91 inches and was painted light grey with outlined blue numbers. Harry qualified the car in fourth starting position in the 33 car field with a speed of 116.739 mph. In the race, he completed 38 laps before the crank broke and was awarded a 25th place finish.

Next up we see the George Lyons entered 255″ Offy powered beauty for driver Cliff Bergere and riding mechanic Louis Miller before the 1937 Indy 500 (JHC_455). Flying Gilmore colors of creme and red, our boys qualified the car in 16th spot with a speed of 117.546 mph. In the race they moved to the front all day and ended up finishing in a respectable fifth place averaging 108.935 mph for the 200 laps. Myron Stevens built the chassis and body.

In our next shot, we see a happy Lee Wallard at Indianapolis in 1949 (JHC_465). The Maserati was entered by Indianapolis Race Cars, Inc. which was backed by one Tony Hulman. Lee qualified the black and white supercharged 181″ straight-8 powered car in 20th starting spot at a speed of 128.912 mph. He lasted 55 laps in the race before he lost a gear and was classified as finishing 23rd. The car’s number was changed to 6 before he qualified and the team car driven by Fred Agabashian wore the number 15 in the race. Lee would go on to win the ’51 race in Murrell Belanger’s hybrid Kurtis.

We’re used to seeing shots of the big shots and newsmakers but not so much of the rest of the field. So let’s have a look at Len Duncan sitting in the Ray Brady Special at Indianapolis in 1954 (JHC_483). The cream, black and red car was conceived by Gordon Schroeder and powered by a 270″ Offy. Len waves to us just after he qualified the car in the 26th starting position with a speed of 139.2ish.

In the same boat as above, Harry Turner entered this Automatic Radio Special in the 1962 Indy 500 (JHC_497). The Offy powered machine was driven by one Leonard “Gig” Stevens. As for the car, it was originally built by Quin Epperly for the ’58 show with a laydown engine. Tony Bettenhausen was the driver that year and finished in 4th. Tony B. drove it again in ’59 as the Anstead Rotary number 1 and flipped it in practice, ouch. Harry Turner bought the car on the spot and had it rebuilt it. In ’61 Eddie Russo and Jimmy Davies, both tried it with the engine now sitting upright and both DNQ’ed. That brings us back to ’62 and this shot of the car with a new Watsonesque nose sitting in Gasoline Alley. Gig was running his rookie test and spun in turn two, slid 825 feet and luckily didn’t hit a thing. That was the last anyone saw of the car at the Brickyard.

Call it what you want, Silent Sam or the Whoosh Mobile, Parnelli Jones driving the Granatelli STP Oil Treatment Special was the class of the field at Indianapolis in 1967 and fits in the class of being a really special car that was many times photographed (JHC_643). Opposite driver Parnelli Jones on the other side of its backbone chassis sat a turbine engine that had gobs of torque and basically ran away with the race. After starting in sixth (we don’t want to say he sandbagged it) he shot into the lead and dominated all until lap 196 when the gearbox broke leaving Parnelli with 196 laps on the books and a sixth place finish the results. Bet you can guess what the USAC rulemakers did for 1968.

David Hobbs (yes the same Mr. H You can find these days doing color commentary on F1 races) gets buckled into his Roy Woods Racing Carling Black Label Eagle on the starting grid before the start of the 1973 Indianapolis 500 (JHC_647). The Hobbster qualified for the race down in 22nd starting position with the 158” Turbo-Offy powered car at a speed of 189.454 mph. On race day, when they flagged the race to an end on the 133 lap because of rain, David had completed 107 laps and was credited with an 11th place finish.

A decade down the road from the above shot is another cool one from Joe Henning showing Gordy Johncock cruising through a turn at Indianapolis in 1983. Entered as the STP Oil Treatment Special, our driver mashed the pedal to the floor and zoomed the Wildcat IX Turbo-Cosworth powered the car to a tenth place starting position. In the race, Mr. G. got as far as the 163rd lap before the gearbox broke and relegated him to a 14th place classification.

We snapped this shot of the tail of the Carlos Munoz shoed Dalara DW12 in Tech Inspection on Thursday, April 10, 2014, in Long Beach. It was entered by Andretti Motorsports and ran Cinsay/Andretti TV sponsorship. Carlos qualified the Honda-powered car in 11th place. On race day he soldiered home in third place. In front is his teammate Marco Andretti’s Snapple sponsored car. Marco started and finished in eighth.

Over the last few months, we’ve accumulated a few thousand more images for the Foundation that we’ll be sharing with you in the News. Like us, hopefully, you’ll be amazed at what has comes out of the woodwork. 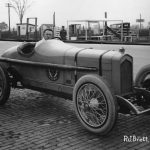 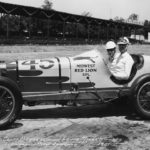 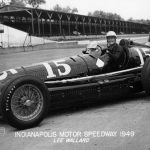 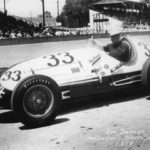 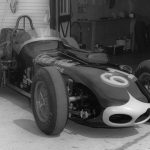 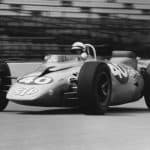 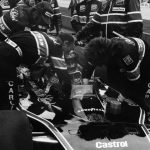 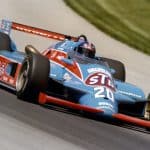 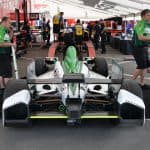 Previous Post: « Out with the Old and in with the New, Year that is
Next Post: The troops at the AHRF went on a road trip this weekend »
↑ Top of Page