A few weeks back we received a call from Scott Phy out of the blue. If we turn back the clock to 1950 we’ll find Scott’s dad, Bill, and the Stanford Brothers were the real deal and ended up winning the S.C.T.A. Championship that year with their V8-60 powered bellytank Lakester.

Fast forward to this week and Scott sent us a package with a bunch of old photos from his dad’s scrapbooks. Needless to say, the shots are fantastic and we have to go out of our way and say double thank you to him for sharing. Everrictures (and Bill was definitely one of those being a Road Runners member) more holes are filled in on dry lakes racing history.

What’s even cooler about the Phy’s Collection is that we find shots taken not only at the racetrack but at home where the cars were built. That’s a pretty sneaky way to segway into our first shot for today’s story. We see a young Bill Phy in his home garage among a collection of parts that he will turn into the first Competition Coupe. By the time we get some of the early pioneer’s pictures (and Bill was definitely one of those being a Road Runners member), more holes are filled in on dry lakes racing history.

ph thanks to his new water pumper. On his down run, it was worse as he only managed to click the clocks at a speed of 75.18 mph. Outch!. He was happy though as he ended up setting a class record at 92.87 mph and became the first Comp Coupe to enter the Bonneville Record Book. For you trivia guys, if you look real close you’ll see an 87 in the lower left corner and a couple of china marker lines. This shot was given to Bill after with these marks after it was used in Hot Rod Magazine over 65 years ago. We call that cool.

As you know a lot of shots we receive are in what we call “slightly used shape”. Our next shot shows what we mean (BPC_032A). It has a nasty fold on the left and a lesser one through the right front wheel and upper nose not counting a tear and impressions in the paper front and back. Better yet the paper has a texture to it that compounded the problem. It all made for some work to fix.

Next up is the same shot after we worked some magic on it (BPC_032). Here’s what we found on the shot after a little research. Bill Phy showed up at two Russetta meets in 1949 (June and July) and entered the car in his own name instead of the standard Stanford Brothers and B. Phy like when running the S.C.T.A. events. He also ran as number 87 instead of his usual 81. The engine was a 156″ V8-60 sporting Edelbrock heads and intake manifold, Harmon & Collins cam and Kong ignition. As of now, we don’t have any speeds for the meets. The number 27-A Roadster in the background was run by F. Lee Norton of the Velociteers who ran a 252″ flatmotor.

Last up this week of the Phy shots is BPC_083. We see Sidewinders member Alan Hall’s Streamliner at El Mirage on June 2, 1946, getting his timing slip annotated by an official behind the timing stand. Alan was a post-entry and ran 114.64 mph that day against Bob Rufi’s ’40 record of 140.00 mph.

In the early part of the week, we were toiling away on some 1968 Grand National Roadster Show pictures supplied by Doug Rasmussen. Let’s look at some. First up is an SS Record Holder at Bonneville (BPC_002). Bill chopped the 1933 Ford three-window Model 40-720 himself and did his share of street racing with it (we didn’t say that) before channeling it and adding a modified Auburn grill-shell (hanging on the wall) while attending CalTech in ’48. We love the borrowed Ford Parts sign and parts taking up wall space. Note the interesting breather setup on the flattie V8 oil pan under the headers.

For our next act how about Bill’s ‘33 3-window Mercury powered Competition Coupe at full song captured on his return record run at Bonneville in 1949 (BPC_017). The purple car (you have to remember Bill hung around with another Bill called Burke who’s favorite color was purple) ran as number 200. After qualifying first in class on Thursday with a speed of 123.62 mph he had a typical flathead problem, that of water leaking through the hogged out ports. With no time or way to repair the problem, it was head for the starting line pronto and run. On his up run, Bill ran a slower 110.56 street T Roadster Glass Class entry that was the handiwork of Gary Robertson out of Fresno (DRC_108). The car featured a ’23 T glass bod on a homemade frame with chromed running gear. A 283″ Chevy supplied the power that fed a three speed and a ’48 Ford rear end. A brass radiator was up front and a brass gas tank was out back. It rode on wires all around with the backs 8″ deep. The car was painted Candy Red and featured Gold Leaf trim.

We’re looking at Harold Scott’s wild 1935 Ford Pickup that he entered in the Street Rod Coupes Class (DRC_113). The body was channeled and sectioned and the front end was hand formed out of aluminum. Under the hood lurked a 348″ Chevy. Simulated Diamonds and Rubies (that’s what the program said) adorned the hand formed dash that molded onto the center console. It was painted Pearl While with Blue accents.

We have no clue as to the owner of this 1955 Chevrolet Nomad was it wasn’t listed in the ’68 GNRS program (DRC_109). Note the fancy paint job, the sididub. It was made of felt and individually sewn on the back of the club’s jackets. American Knitwear out of Plaistow, New Hampshire made the patches. The Club’s founder and more than once President was and is Jere. We can’t say thanks enough for all the early drag race history you’ve passed on to us.

Did I mention that this week from Jere is another one of a kind in the form of a Bumper Sticker from the 1958 NHRA National Championship Drag Races held in Oklahoma City, Oklahoma (JSC_078). This could be the only one left in the world thanks to Mr. Sheehan.

In less than three weeks it’s off to Bonneville for the 2014 edition of Speedweek. To get you in the mood we dug out an old newspaper clipping from 1965 touting the then-new Harley-Davidson motored streamlined motorcycle (DOT_970). The bike would end up setting a record of 176.817 mph on October 21, 1965, powered by a 250cc “Sprint” motor running on gas.

Our buddies over at Halibrand Engineering sponsored Craig Breedlove’s AMC ride for a go in the A/GT class epipe exiting the front fender and the Gold Satin pillows guarding the Goodyear Blue Streak’s.

So as not to dazzle you with too much “Bling” we’ll call this the last of the show cars for the week (DRC_099). This Class A Gas Supercharged Willys was the ’68 GNRS entry of Michael Mitchell. It featured a steel ’33 Willys body, an aluminum deck lid by Ron Corvell, a Fletcher & Brown tube chassis and powered by a 454″ Chrysler under the glass nose. It went by the name of “Wild Mouse III” and featured the artwork of Stanley Mouse (he was and is known for his wild Filmore Auditorium hippy posters for acts like the Grateful Dead among others). Behind it is Harry Costa’s 1919 “T” called the “Paddy Wagon” built by Mickey Himsl.

It seems like every week of late Jere Sheehan sends us something new to drool over. Last week amongst the treasures we received was JSC_079. One of the very first hot rod clubs from the New England area was the Cam Snappers and this jacket emblem dated March 16, 1952, was used by the clllllhe at Bonneville in 1969 (GHC_047). Craig was chasing Chicagoan Bill Scace’s record set back in ’67 at 192.879 mph with 396″ AMC powerplant under the hood. Things didn’t go as planned for there was no time recorded on the car. The modified bodied Javelin ran Halibrand mags naturally and Cyclone headers, a business at the time of current AHRF contributor Chet Knox. Small world, huh.

If you’re lucky enough to visit the speed mecca of the universe, racing starts after the drivers meeting on Saturday morning (JMC_5050). Here’s a shot to get you in the mood for racing and sucking on a couple of beers to keep hydrated.

You can never take away being the First! 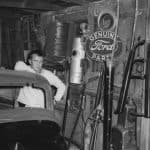 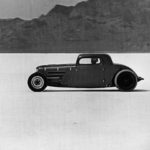 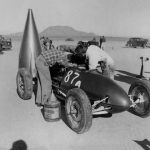 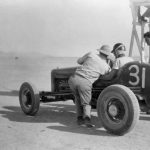 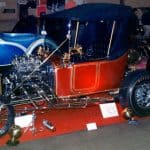 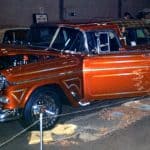 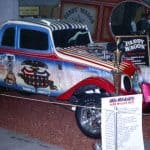 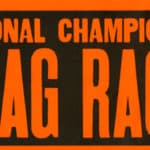 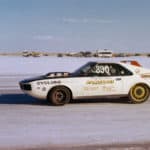