Let’s start with scanning around 160 new images for you.

The first group of 100 or so are the slides we ended up sorting the last week or two and date from ‘76 and ‘77. The one thing they all have in common is a nasty color shift to red. It seems our shooter was buying motion picture film that was loaded into 35mm cartridges to save a few bucks. Oh well, at least we have some images. We’ve converted the first shot for today to a black and white image and left the rest in their red form so you can see what we had to work with. DBC_664 shows the business side of a cast iron McDowell head that was made to fit a Ford Model-A/B. A lot of time was spent on designing the combustion chamber and it even has some squish area designed in to create a little turbulence for better volumetric efficiency. This photographed was taken in January, 1976. It’s interesting to note that the intake and exhaust valves are the same diameter. Old time mechanics would use a screwdriver head in ar head in a hand drill or speed wrench, insert it in the slots in the valves and start twisting. That’s how you lapped the valves in the old days. Real hi-tech. There are about 15 shots of different old time heads.

DBC_695 shows Bonneville racer Bruce Geisler’s neat roadster-pickup that was shot outside the Great Western Exhibit Hall during the L.A. Roadster Club show. Note that the Chevy V8 has a little help in the breathing department. The slide mount said July 1976 and is one of a dozen shot at the show.

We have about two dozen shots that were taken on July 31, 1976, during the Antique Race Car Night at Ascot Park in Gardena. DBC_713 shows a ride called the Orange Blossom Special and was owned at the time by racing legend Joe Gemsa. And yes, the car was really orange. To its left is Bud Rose’s famous sprinter that’s alive and well in a private collection these days. Bud started his career in racing back in the early ’30s at a place called Muroc.

We also have a few hot rod shots showing cars in the build sose’s famotage. This November 1976 image shows how hot rods were built back in the good old days (DBC_751). No jig table or high tech shops to work in, just some old saw horses, a stick welder, a grinder and an understanding wife. Note the other project waiting in the wings.

We’ll use the ‘49 Speedweek reference as a segway to our next two shots. Our old pal Julian Doty just happened to take his camera to Bonneville in ‘49. Like we mentioned earlier about the screwed up color shots, Julian also used motion picture film in his 35mm camera but this time it was the black and white variety. He told me that it was really cheap and no two rolls of film had the same amount of film on them. One role you might have twenty shots on, another you might have 40. Those racers sure were frugal.

We see AHRF Contributor Kay Kimes sitting on the trailer’s wheel at the First Annual Bonneville Nationals Speed Trials in 1949 (DOT_952). The car is the Kimes-Gilcrist Class C Streamliner powered by a Mercury flathead. She ran 136.36 mph. There were six other entries in the class that consisted of three belly tanks run by Breen-Haller, Burke-Francisco and Earl Evans, one car like their’s run as the  Dietrich Special (see above shot), and two real streamliners run by Howard Johansen and Xydias & Batchelor. Those So-Cal Speedshop boys from Burbank (Alex and Dean) put everyone on the trailer with a qualifying speed of 187.89 mph and a new record of 189.745 mph.

Here’s a cool pit shot from 1949 (DOT_954). Looks like the ’48 Olds 76 is well tended to by an ad-hoc group of racers. To the right of the ’47 Cadillac Fastback in the background is the Bell Auto Parts Ford truck that brought needed supplies to the salt. To the Cad’s left is the number 74 Class D Roadster of Jot Horne who just happened to work at Bell Auto Parts. Jot had installed a Duesenberg straight-8 in his ’27 and qualified at a respectable 122.95 mph. He then went on to set the class record at 127.567 mph after runs at 126.93 mph and 128.20 mph.

Both the above shots were on a roll of film that had about 20 images on it. The roll was around 1/2” in diameter and so tightly wound that there was no way to straighten it out so blue tape here we came to hold things flat. Needless to say, it took forever to scan them. Another thing working against us was the film wasn’t properly exposed or washed back when it was processed so if you know what fogged film looks like, that’s what we had to work with. And yes we have another twenty rolls of images waiting to be scanned. It took us about 25 minutes to save and retouch the shot with Kay in it. Our Olds shot has yet to be retouched.

We’re not finished yet. We’ve had 30 shots laying on the lightbox that were taken back on March 13. 1981 and they said scan me, so that’s what we did. Here’s one of them (JMC_4414). We see some Mechanics hard at work on the rear of John Watson’s McLaren M29F at Long Beach on Friday during practice for the Grand Prix of the United States West. The team hadn’t finished the new MP4-1 yet so they were using their old 1980 car. Watson started way down in 23rd of 24 starters after qualifying at 1:22.18. In the race, he managed to complete only 16 laps before his Ford-Cosworth engine went away. His team-mate Andrea DeCesaris had even worse luck and crashed out with Alan Prost on the opening lap. Let’s say the team didn’t have any luck at this race. You will note that this picture was taken about eight feet away from the car and mechanics. I’m trying to remember if I snuck in or had a pass, but one thing for certain, one couldn’t pull this off today.

After the above roll, it was time to attack some more George Callaway shots, so we can count 24 more put to bed. Obscure is good and that’s what the AHRF is all about. We see Ed Felter at Riverside Raceway on September 24, 1972, working hard during the Riverside Grand Prix for Formula 5000 cars. A fancy paint job covers the Lola T190/T192 chassis that was powered by a small block Chevrolet and sponsored by the Blue Magic Corporation. The race consisted of two 38 lap heat races. Ed qualified in 25th spot out of 28 competitors with a time of 1:24.21 as compared to pole sitter David Hobbs at 1:15.57 (Yes, this is the same David Hobbs that we see calling Formula 1 races today). In the first heat, Ed finished in 18th spot. In the second heat, he finished in 13th. With points gathered in each heat, Ed was awarded a 15th place finish overall.

Our last shot today shows a cool looking AA Fuel Altered that we snapped at the New England Hot Rod Reunion two weekends ago (JMC_4436). For some unknown reason, we just happened to pick up the December 1964 issue of Hot Rod Magazine in one of our piles of reading materials and paged through it. What happened is the lights went on, we had just ID’ed our shot from a pix on page 88.  It was captioned George Snizek-Charlie Dodge, AA/A, Oceanside, New York. With this info fed into the net, we found- http://www.pacersauto.com – and info on our mystery car. Except for a few details, the car looks almost exactly like the one that graced the HRM page. We also discovered the car was featured in the July ’65 issue starting on page 68. We now know it used a Chassis Research frame, Cal Automotive ’23 T body and a couple of different displacements of Chrysler Hemi’s for power. It ran 159.86 mph in 9.63 seconds and was an N.H.R.A. National Record Holder in ’63, ’64 and ’66. No wonder we like the car. 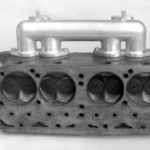 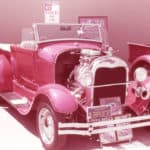 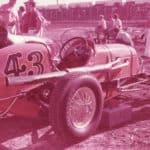 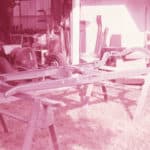 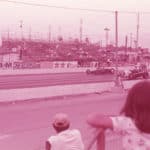 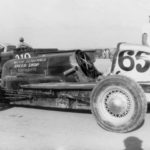 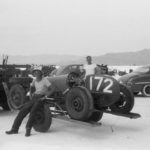 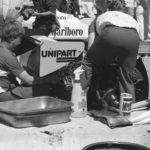 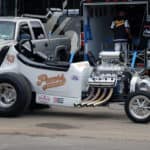 Previous Post: « From a Flop Top to Short Shorts, Yea Baby!
Next Post: A Sore Backside Leads to New Discoveries »
↑ Top of Page