The last few months have kept us super occupied with what seems like a never-ending parade of new shots. This is both good and bad. In the old days the collections we would find consisted of 20 or 30 shots so we would scan and identify them as we went along. Pretty soon the collection size was up to 75 of 100 shots in each collection so it became easier to sort and scan them and then go back and identify them. So far, so good.

Before you knew it collections were coming in that were larger so we got to the point that we would scan them and send the shots back to their owners and then jump in and do the thing. This was all fine until we started getting even larger collections and pictures that required more than pulling one of our reference binders off the shelf and turning some pages. A couple of good examples like the 90 great shots we got from Doug Rasmussen taken at Omaha Dragway back in the early ’60,  or A.B. Shuman’s 375 shots from Sanford, Maine and vicinity, there is no one source, or even any source to go to to find out who our heroes are in the photos.

On the positive side, we have to thank whoever invented the PC, the scanner, the internet and those hundreds of sites that we’ve bookmarked and now use daily to help us in our identification process. We forgot to through in the genius who came up with the bookshelf too, for we would be lost without them to hold all our tattered books and magazines and let’s not forget George Eastman (Kodak) for being smart enough to put dates on slides.

Enough of the boring stuff let’s look at some newly scanned pix.

Next up is one of hundreds of 2 1/4” negs from an expensive camera that were plowing through (MWC_040). The shots were all taken at El Cajon Speedway down near San Diego sometime around 1980. We figure in about six months we’ll have them all scanned and maybe some answers as to who’s in the shots.

During the week we ran across a scrapbook that as far as we can tell was put together sometime near the beginning of the 20th century. It consisted of a lot of old ads and naturally some clippings of old race cars. The four pictures seen here (JMC_4586) were taken at Ormond-Daytona Beach back in 1904 during the speed trials held on the beach between January 28th and February 1. This was the Second Annual Automobile Race held on the beach that at least 15 automobiles were entered.  Of the four pictures, the one in the upper left is the only one we found in current history books on the subject. Looks like the AHRF has out-sleuthed the experts again. The book info is at odds with the caption of the picture from the old magazine. The number 6 car is a Renault that’s had its cooling system relocated to the sides of the hood. The owner of the 30 hp Renault was a W. Gould Brokaw. Here’s where we get conflicting info. Our magazine says the driver was W. G. Bennin and our book says its Maurice G. Bernin. You can be the judge. Our second pix at the top right shows A. D. Proctor Smith in a 35 hp Panhard. In the lower-left we see J. L. Breese in his 40 hp Mercedes. In the lower right, we have S. R. Stevens in a 60 hp Mercedes. No speeds were given for our hero drivers.

These scrapbook shots were originally published in an obscure magazine called Burr McIntosh Monthly that came into being in April 1903 and ceased to exist in May 1910 after 86 issues were published.

Even more exciting than the four pictures above is this fascinating Land Speed Racer find in the same scrapbook (JMC_4581). We present Comet Number 1.  We struck out on finding any LaRoche automobile but discovered there was an F. A. La Roche Company in New York City that was the sole U. S. importer of Darracq Automobiles. With a little digging we discovered that on July 21, 1904, Paul Baras driving a Darracq set the World’s Land Speed Record at Ostend, Belgium with a speed of 101.679 mph in the flying kilometer. The car was powered by a 100 hp 11.3 liter four-cylinder. By the way, this was the first-ever car to set a record over 100 mph. The record didn’t last long, it was broken the same day at the same venue by a Louis Rigolly in a Gobron-Brillie with a speed of 103.561 mph. Not one to be deterred Baras came back on November 13, 1904, and retook the record at 104.530 mph. We can only guess that our drawing was for a concept car featuring two of these Darracq engines, one in front and one in back drawn sometime before Darracq unveiled it’s 22.5 litre 200 hpp V8 engined machine that copped the World Land Speed Record at 108.589 mph on December 30, 1905, in Arles, France.

Another batch of new shots just in featured this shot (JMC_4564). The cars are lined up against the pit wall before the start of the 1946 Indianapolis 500. The number 1 car in the foreground is the Bowes Seal Fast-entry driven by Rex Mays. Under the hood is a supercharged Bud Winfield straight 8 displacing 180″. The chassis was built by Myron Stevens. Rex started in 14th spot and was awarded a 30th place finish. Standing next to the cockpit without a hat is former lakes racer and chief mechanic on the car Pete Clark. Behind the Mays car is the number 2 Bud Winfield entered Novi Governor Special that was driven by Ralph Hepburn. The Frank Kurtis built chassis housed a Winfield designed 180″ Novi V8.  Ralph started the race in 19th spot and was awarded a 14th place finish after stalling Standing next to the car with his hands on his hips is lakes racer Conrad Weidell. Next up is the number 16 Throne Engineering Special, driven by George Robson. The Clyde Adams built car was powered by an Art Sparks designed, supercharged, inline 6 displacing 183″. George started in 15th spot and came home the winner. Following him is another Sparks designed ride that wore the number 14 and was entered by Bob Flavell as the Mobilgas Special. The Clyde Adams built car was powered by a supercharged Sparks 183″ inline 6. Driver Harry McQuinn qualified for the race in 18th spot and was awarded a 13th place finish after running out of oil. Next up we can see the number two on the nose of Ted Horn’s number 29 Boyle Maserati. Under the hood of the purple ride was a supercharged 179″ straight 8. Ted started the race seventh spot and brought her home in third. Following him is another Maserati entered as the Jim Hussey’s Special and driven by Russell Snowberger. Rus started in 10 place and was classified as finishing 12th after losing a rear end. Tucked in real close behind Russ is the number 63 Alfa Romeo entry of Bill White entered as the   Special. Driver Jimmy Wilburn put the supercharged 181″ straight 8 powered ride in the 16th starting position and was classified as finishing 19th after the engine gave up. Behind Jimmy and the last car we can make out is the Fageol Twin Coach Special shoed by Paul Russo. This wild ride was powered by two supercharged 4-cylinder Offy midget engines displacing 180″. Paul put the strange car in the second starting spot and got as far as the 16th lap when he stuffed it into the North-East wall. He was credited with a 33rd and last-place finish. What’s really weird is if you take away the Italian and the Fageol cars, the others mentioned were all built within a 10-minute drive from where I’m typing this.

Back on May 2, 1965, I jumped in my ‘56 Ford Ranch Wagon and headed for Riverside to take in round two of that year’s United States Road Racing Championship and do some shooting. One of the shots taken that day (JMC_3730) shows Bob Johnson hustling through turn one in his Cobra. Bob finished second to teammate Ken Miles and a lap ahead of   man Dick Gulstrand in a Corvette. This was the beginnings of the end for Corvette race cars of the day thanks to a company called Shelby American, a ride called the Cobra and a Texan called Carroll Shelby. Today’s generation only associates Shelby with Ford Cobras and Mustangs but us oldsters remember that Carroll won the Le Mans 24 hour race in 1959 driving an Aston Martin with Roy Salvadori.

We bring all this up because we just “found” a couple of shots of old Shel. JMC_4590 was misidentified as Lance Macklin but you can’t fool the foundation some of the time. This cool shot was taken at Sebring on March 25, 1956, and shows Carroll wheeling his factory entered DB3S Aston Martin chassis 7 towards a fourth place overall, and first in class finish in that year’s 12-hour endurance race. Shelby and his teammate Salvadori completed 187 laps at an average speed of 80.03 mph. The car was powered by a 2922 cc inline 6 that put out 230 hp at 6,000 rpm and had it’s first competition outing back on May 15, 1954, at Silverstone. This was the car’s eighth race appearance and would do four more before being retired at the end of 1956. The car won two of its 12 races entered. Ah, the days of skinny tires and cars that you could drift through turns.

This coming week it’s going to be quite busy what with the Grand National Roadster Show. That gives us a perfect excuse to pull out a few shots from past shows to get you ready for who knows what will get shot for next Sunday. JMC_4594 was shot in 2010 and gives you a birds-eye view of where you’re supposed to toss the ping pong ball to win some kind of prize (just kidding). JMC_4595 is an over the top tailgate on a once old pickup truck from ‘10. JMC_4591 is from ‘07 and is really an Edsel hot rod. JMC_4592 was taken in ‘09 at the NHRA Museum. It has to be visited while at the show. JMC_4596 is an old Motor Trend Cover Car snapped at the ‘11 show. This old-time ride says take me for a ride right now. 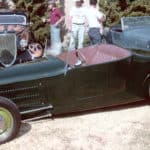 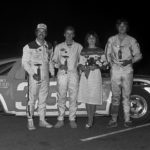 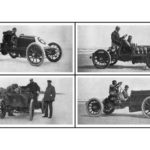 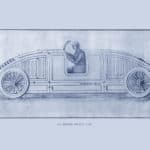 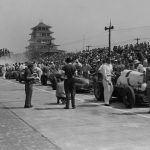 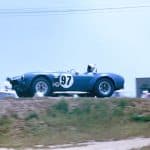 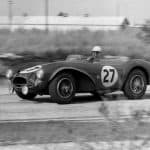 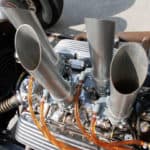 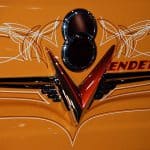 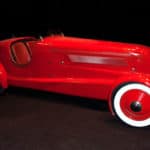 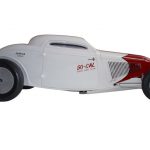 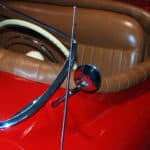 Previous Post: « Head Scratching Time
Next Post: From the Lakes to the Drags and back in the same issue »
↑ Top of Page