The problem with us “keep everything” types is you forget what you’ve got. Earlier this year I dug out a box full of old negs shot too many years ago. There were a bunch that had never been put in sleeve’s so it was time to do the right thing and head to the camera store and get some. Next, it was sort the negs and figure out where they were shot. In the batch of negs were a couple from ’59 showing yours truly in home built Go-Kart (JMC_1814).

The scary thing after looking at the pix is I remember everything about the day it was shot. Back then if there was a big parking lot you just went and used it. The one in the pix was on Van Owen near Hollywood Way and was used by Lockheed employees. After some laps by my dad and his pal Punky, it was my turn. About a dozen laps in an older guy (i was 14 so everybody was older than me) comes up to pass and ends up spinning off the track. Man was I hot stuff. A few laps later what happens, it was my turn to do some loop-de-loops. That didn’t go over too well with mom so that was the end of my turn. No sooner than I stopped than someone runs into the chain link fence and busts up his leg real bad. Needless to say, it was we were out of there right now and never to return.

Like everything back then this one was home brewed. A used Westbend resided in a cradle bolted to the chassis for future engine swaps. Tailwheels from used up old WWII surplus aircraft were wider and really stuck so they were used and rode on big Timken bearings for less rolling resistance. The spokes of the steering wheel were made from tapered control rods from more surplus warbirds and the rim was wrapped with electrical tape. It all got a nice coat of white paint hanging from a ceiling rafter. The number on the tank was a stick-on normally used on a mailbox. The 1/4 plywood seat and back were covered by some thin vinyl sewed up by mom. Home made was good.

As for some of the other negs, there were some from an early ’60’s car show at the Los Angeles Sports arena and the San Fernando drags. Fast forward to ’65 and we have some sprinters from Ascot and Thunderboats from Mission Bay. And let us not forget Riverside and Santa Barbara. Is anyone ready for some shots taken at Kent Washington during a USRRC race in ’68?

More old Leslie Schlom shots were scanned this week from prints. LSC_043 shows the late, great, Rex Mays at Indy after he had qualified on the pole for the ’48 race. Check out his beverage of choice, a Coca-Cola and how he kept it cool in his teams pitbox, a nice new Philco Icebox. My gut says it wasn’t plugged in.

Let’s go back another 10 years to 1938 and see what drivers had to contend with before rollover bars. LSC_024 shows Bob Swanson cushioning his Midget as it slides along the track upside down. Outch! A few weeks later he was back in the saddle with his winning ways. The chap on the left is Ronney Householder in his Sta-Lube sponsored car.

If you like hot rods on dirt you’ll like this next one (GRW_012). Clay Smith’s daughter passed the Foundation a bunch of shots from her step-dad Guy Wilson. “Red”, as he was called, was part of the Long Beach connection that included Smith and Bill Stroppe among others and was a fierce competitor. Red’s car is shown down low in this shot that was also used on the cover of the June 1950 issue of Hot Rod Magazine. Driver Ed Kassold is pouring the coal to it. It was powered by a little old Ford flathead that happened to be an inline 6. On the outside is George Amick in Larry Bettinger’s Merc flattie powered ride. The picture was taken in ’49 by Dave Smith.

Like the above shot of Swanson trashing his car, Track Roadsters more often than not suffered the same fate. Red had painted the car up real pretty for the 1950 Russetta Hot Rod show and not too long after that kablammy! GRW_020 shows what’s left of the roadster. Note the center of the front rim didn’t like its rivet job.

Earlier today (Sunday) a little road trip up to Filmore was in the cards. To be more specific, the movie Deuce of Spades was having its World Premiere (JMC_1813). If you like Hot Rods you’ll love this movie. I don’t want to spoil it by giving you to many details but if you ever street raced, chased after a girl whose parents hated rodders (you) or wanted to know the dirty little secrets of your ride’s many lives ya gotta see this movie. A lot of scenes were shot in and around the town so it was only fitting to have a car show as a prelim to the screenings. The actors and actresses and many of the cars in the film were there for your talking and viewing pleasure. It doesn’t get any better than that.

Naturally, a couple of the show cars caught one’s eye. JMC_1811 looks bitchen just sitting still with its wide whites, chopped top, and just right rake. Another one that did it for this Culver City-ite was a little black Olds coupe. Albertson Oldsmobile was based in C.C. and one could always see a famous and fast dragster parked in front of their dealership. The town was also home to the OLDS_TERS car club so when I saw the club plaque in the rear window of the coupe it was a must shoot as I hadn’t seen one for over 50 years (JMC_1812). 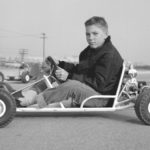 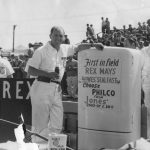 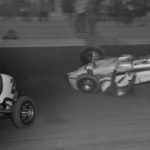 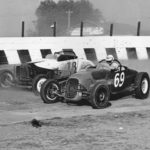 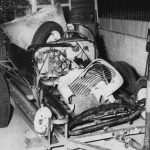 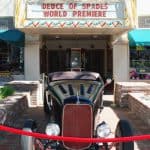 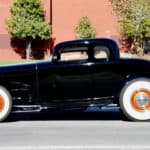 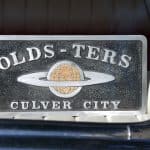 Previous Post: « Stuff and the Last Lakes Meet of the Year
Next Post: A Mix of Old and New »
↑ Top of Page