The first three days of this last week we were busy gathering up a bunch of shots and posting them in the Photo of The Day section. Naturally, there were some problems and Captions disappeared on shots already posted. Arg, Computers.

David Steel and I were supposed to of flown out Thursday to attend the Race of Gentlemen in New Jersey but a Mother Nature hurricane messed that up. If we’re lucky and there’s a beach left, we will be on for next weekend. In between, it was scan time. We did about fifty new ones for you. The S.C.T.A. finally got their computer woes fixed and we got to caption the shots from the September 13 races. Let’s look at some of our new stuff.

First up is a Frank McGurk sticker from after Ed Iskendarian had bought the company from Frank (BIC_005). It was made by the Meyercord Company and is dated February 1970. Thank Ben Ikendarian for passing it on to us.

Another cool one from Ben is this Mallory Ignition sticker (BIC_007). Sorry, it wasn’t dated on the back.

We couldn’t resist showing you Leon Duray’s old Packard Cable Special RWD Miller 91″ at Legion Ascot Speedway back in late March 1933 wearing Mallory sponsorship (CKC_691). The car was now fitted with a newer and larger 4-cylinder 220″ Miller. Duray was the owner and entrant and he tapped an upcoming driver by the name of Wilbur Shaw to drive it. Lou Bromme was the crew chief on the car and Shaw in his book Gentlemen Start Your Engines said the combo of Bromme and Duray was the best team he ever drove for.

Seems time passes way to quick around here. You start a little pile for oddball stuff to scan and pretty soon a year or two has passed and the pile isn’t little anymore. Let’s look at some of the stuff from the pile.

We picked this up at the end of the road last year at Bonneville after the rainout (JMC_5634). It’s a cool little pin about an inch wide commemorating 100 years of racing on the Salt Flats. I know the S.C.T.A. has more of them if you want one. Ditto a rainout for 2015 and another neat little pin showing the Bosworth & Young Streamliner (JMC_5635). Collections really start looking big time when you get around 50 of these puppies.

We’ve been hard at work going through some old scrapbooks courtesy of Chet Knox. This clipping ran in the Indianapolis Times way back on May 9, 1950 (CKC_2284). The Hub Capp name is kinda dumb but the Prest-O-Lite chimney smoke wa-Lite cs the real deal. Drivers used it as a weather vane at an airport. Straight up and let’s go qualify. Wonder what the EPA would say about that these days?

We really like CKC_2282 as we knew the character in the shot. Bruce Johnson is seen working on Sandy Belond’s Belond Miracle Power Streamliner at Indianapolis in 1956 in this clipping from the Indianapolis Star Newspaper. Eddie Russo and Bill Boyd were both tapped to try and qualify the car but the Offy-powered ride just wasn’t fast enough to make the field. Old Bruce lived not far from me and spent many years measuring engines at Bonneville.

We see Bruce Johnson checking his probably almost bald front tire on his flattie-powered number 233 roadster at Muroc back in 1941(JUC_161). Now we have to figure out the month. In June the program said he had a pickup so that lets out the first meet of the year. In July we have him in a roadster and running 98.90 mph. For August and September, he’s in the program but we don’t have any speeds. Bruce waa was. Bruce was still racing in the late ’90s. He took his new Lakester for a lap at the Muroc Reunion and it got away from him. Sadly he didn’t survive.

Our next shot shows a spread of one of Chet Knox’s scrapbooks. Look at the right-hand page and you will discover a story on Muroc (JMC_5661). We’ve transcribed it for you with a few comments at the end. Hope you enjoy the find.

Over 10,000 people drove 125 miles from Los Angeles to spend six hours in blazing sunlight and alkali dust watching “mechanical cocktails” from all parts of the state show their speed at Muroc Dry Lake, Calif.

The test consisted of driving a clocked 1/5 mile on one of the world’s best straightaway courses. There were over 140 home construction jobs in the competition, and when the dust cleared and times were checked, speeds up to 118 miles an hour were recorded.

Under the joint auspices of the Muroc Timing Association and the Knight Riders, these races and time trials have been held annually for the last nine years, with the single exception of 1936. The Knight Riders whose home tinkering ground is Fullerton, Cal., is an organization which was formed several years ago by young auto enthusiasts who hate to leave a standard head on a car.

The aim of the Muroc Timing Association is simply stated by George Wight, the originator of the plan:  “We find that the speed trials offered by our organization have a double advantage. First, they provide an opportunity for accurate checking of the efficiency of motor accessories, both home built and commercial. We have found that no small advancement in design has been achieved through the test conditions provided by these races.

“We have also found that these races, high speed as they are, actually tend to increase safety. You can hardly blame a fellow wanting to try out his car after having spent many hours and much money increasing its efficiency. Muroc Dry Lake provides a safe method of doing this. Of course, we have no way of checking, but we believe that a large amount of high-speed deriving on dangerous city streets has been prevented by the safety valve offered by these races.”

There has never been an accident in the races themselves.

To give every contestant a chance to win a prize, cars are divided into several classes, depending upon the maximum speed and type of body.

The best time this year’s event was 118.42 miles an hour, made by Duke Hallock driving a Model B Ford with a Cragar head. In many respects, however, the record was eclipsed by Bobby Nordskog of Los Angeles whose “mechanical cocktail” compounded of an ancient Model T ford block and chassis, Rajo head, and home-built racing body, achieved the phenomenal speed of 103.5 mph. His car was the best appearing modified body in the race.

Another combination of parts was in the Class H winner driven by Ralph Schenck. The engine had a model B Ford crankshaft, 3 7/8 in. bore, Oldsmobile head, Chevrolet block and Model B connecting rods. The driver too two years to build the car. He had never driven over 90 mph before but won in his class with 111.11 mph.

A caption with three photos from the story read-

Hopped Up At the top is a car in the 90-100 mph modified body class entering the 1/5 mile clocking stretch with some 10.000 spectators lining the track at Muroc Dry Lake, Calif. In the center are four of the officials at the judges’ stand for the races. The lower picture shows specially-equipped Ford in the stock body class passing the judges’ stand at 92.78 mph.

No author or publication credit is known.

As far as we can figure out this story was done about the May 16, 1937 Races held at Muroc. The Purdy Brothers did the timing and that looks like Roscoe Turner on the right in the pith helmet in the center shot. Duke Hallock out of La Habra is listed as running his Modified as car number 16. There is a speed listed in the program we have as 112.50 mph. The results we have show Bob Nordskog running 103.45 mph in his car number 3, not the 103.5 that’s in the story. This car morphed into Art Chrisman’s number 25 that can be seen today at the NHRA Wally Parks Motorsports Museum in Pomona. Class H that they mentioned is for Modified Bodied Cars over 110 mph. The winner, Ralph Schenck from Gardena running as car number 57, got a set of Jadson Ferrochrome Valves. Car 38 is listed as being Jack Burrud out of Hollywood.

Since we are on the Muroc race from ‘37 how about this shot of Duke Hallock’s roadster at the event courtesy of Jack Underwood (JUC_078). For historians, Duke should be called the father of the Turbocharger as he was the first to use one on a race car in the ’30s at a place called Muroc. At the time he was working for a new company called AirResearch that made radiators for aircraft. After WWII it became Garrett. The rest is history.

The S.C.T.A. finally posted the results from the September 13th lakes meet. We got to do some shot captions for you, Enjoy.

Greenspeed Racing showed up at the September 2015 S.C.T.A. lakes meet with their sharp looking Class C Diesel Truck that started life as an S-10 Chevy (JMC_5628). The record stood at 125.745 mph and was set back in November 1998. It didn’t last long as driver Dave streaked through the lights at a speed of 165.635 mph to blow the old record out of the water. Congrats Dave and enjoy those whopping 264 points you received.

e Schenker streaked through the lights at a speed of 165.635 mph to blow the old record out of the water. Congrats Dave and enjoy those whopping 264 points you received.

Depending on mother nature we may or may not be home from a race on the sand by next Sunday night. Stay Tuned. 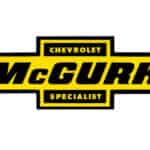 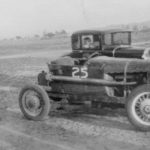 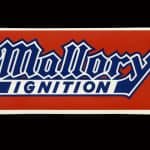 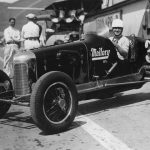 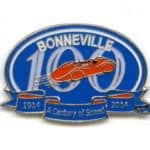 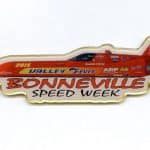 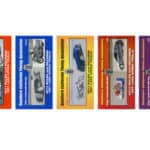 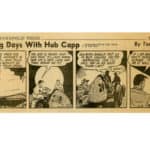 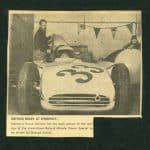 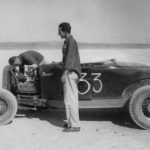 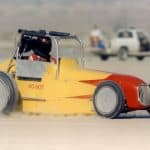 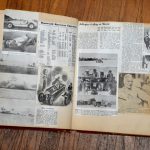 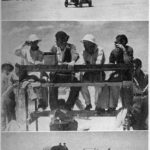 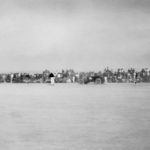 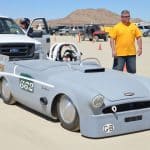 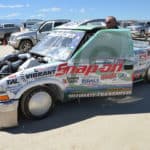 Previous Post: « From Dirt to making history at a Ball Park
Next Post: Beachy Keen »
↑ Top of Page