We spent the last four days over in Wildwoods, New Jersey for the Race of Gentlemen getting a dose of real hot-rod-ism. It was like turning back the clock to a much simpler time. Before departing we had to clear off our desk and desktop to make sure we had some workspace after our adventure. Let’s have a look at some of the stuff we put to bed.

First up we see a dinosaur from the days we love and what replaced it. Welcome to a practice session at the famed Indianapolis Motor Speedway in the month of May way back in 1963 (JHC_1390). On the right, we see the green and yellow number 93 Lotus Powered by Ford entry that was called a funny car being driven by Dan Gurney. Dan was originally assigned the number 91 Lotus but crunched it in qualifying so reverted to the backup car seen here. Before he qualified the car it was repainted white with a blue stripe blue. He started the race in 12th place with a speed of 149.019 mph. He brought the 256″ Ford “Stock Block” V8 powered car h car hV8 powered car home in seventh place. On the left is Bud Tingelstad in a real race car, the number 54 Hoover Inc. Special entered by Tidewater Associates. The laydown Epperly was powered by a 252″ Offy. Bud put the orange and chrome ride in the 28th starting spot with a qualifying speed of 148.227 mph. In the race, he had some problems and only completed 46 laps before he clouted the South East wall. He was awarded a 28th place finish. This was a large 11’ x 14” print that we had to scan in two pieces and clone together. After fixing the tears and folds and spotting the dirt and hairs on the print we think it is a winner. Talking about winners, the shot was taken by photo-journalist Flip Schulke out of Florida. Donor Joe Henning got the shot from Bill Fowler. Thanks to all

Our next cool shot was taken in San Diego at Balboa Stadium back in 1949. We see Hal Robb’s brown number 55 Kurtis was called the Jewel with Bob Barker behind the wheel (JHC_1400). On the right, we see the tail of the number b Barker behind the wheel. On t1 car that was owned by Ernie Casale and driven by hot dog Bill Cantrell. The number 9 car was also Casale’s and was driven by another dog, Bill Zaring. The number 2 car was the Kittinger-Stroppe (like in Bill) entry that was sometimes driven by Zaring.

We delight in finding the odd-ball stuff like our next shot especially when it’s a ride way ahead of it’s time (JHC_1409). Built by Pete Neilson for the Marchese Brothers, it first appeared at Indy in 1938 entered by brother Carl and running as number 45. It was driven by Harry McQuinn to a seventh place finish powered by a 151″ Miller straight-8. What makes the car special is it had a tubular chassis, dual front springs on each side and side mounted radiators, all visible in this shot. We see the water pipes going through the firewall so that indicates it still had side-mounted radiators so we’re guessing the photo is from ’38. We have the car entered in ’39 as number 12 with no driver listed. In ’40 it now sported a radiator in the nose but still with the sidepods and was entered as the Leader Card Special. Tony Willman and Harry McQuinn both drove it. The car ended up first alternate that year with a speed of 118.914 mph. In ’41 Paul Russo made the show with it as the Leader Card Special and wearing the number 45. It finished in ninth now powered by a supercharged 137″ Miller straight-8. For ’46 the front end was modified and the dumb-irons removed. Tony Bettenhausen qualified it as car number 27 and then it was withdrawn. In ’47 the car was a no show. It was back again in ’48 as number 32 with Myron Fohr as the shoe and now powered by an Offy but minus the sidepods. He was second alternate with a speed of 121.531 mph. Myron was back again in ’49 with it running the number 2 sporting yet a different nose. He went on to finish the race in fourth place powered by a 270″ Offy. In ’50 wearing number 2 again and with Bardahl sponsorship there was a new cowl and tail so it might have been an all-new car. Myron finished in 11th this time. The remnants of the car was back for ’51 as car number 8 with Chuck Stevenson driving. The car caught fire and was classified as 20th.

For our next shot, we see an unknown sprinter at an unknown track (JHC_1394). The back of the photo has a stamp on it that said Hinea’s Super Quality Photo Service and was dated July 6, 1939. Anybody ever heard of Hinea?

Our next shot looks like the same car as above but wasn’t taken back in ‘39. We tricked you by taking a color shot snapped this last Saturday and getting rid of the color (JMC_5687). Artie Conk from Summit, New Jersey is seen in his Ford banger powered 1933 Sprint Car at the 4th Annual Race of Gentlemen held on Wildwoods Beach in Wildwoods New Jersey. It looks a lot like our unknown sprinter from the previous shot.

Next up is a typical beach scene at the Race of Gentlemen in 2015 (JMC_5675). Up front, we have Pete Flaven’s radically chopped ’31 Model A. Under the hood of the Boston, Mass. ride is a flathead naturally. Partially hidden behind is Ray Prue’s ’27 also with flattie power. He hails from Epsom, New Hampshire.

Wherever you go it seems you always have to wait in some line before you can put the pedal to the metal. This is what it looked like at the Race of Gentlemen in 2015 (JMC_5679).

The cool thing about the Gentlemen is that Bikers and Car Guys intermingled (JMC_5676). In the distance, we see Willy Snyder from the Deluxe Speedshop out of Colorado waiting to stage his number 74 flattie V8-powered Deuce Coupe. His race partner for the round would be Willie Wilcox out of Vail Colorado in his number 9 ’28 Roadster Pickup behind him.

A trip to the starting line lets you get up close and personal but you don’t stay clean very long (JMC_5685). Bruce “Guts” Gordon out of Newton, New Jersey lets us have it with his banger powered ’28 Roadster as he leaves the starting line. Bet lots of the drivers botched their starts because they were looking at the starter and her short pants.

Bike riders got to wag their tail’s off the line in the soft sand just like the starter before they got down and scooted at half track (JMC_5701). Tank mounted shifters on a lot of the bikes kept the riders busy over the humps and soft patches and made for some exciting moments for the spectators. It also seems like the old Indian versus Harley battle will never end.

Bikes weren’t the only ones to wag their tails. Sushi all the way from Tokyo gets a little crossed up in his banger powered A roadster. He saved it, wowed the fans but lost the race.

There was some close exciting racing (JMC_5702). We see Lars Mapstead from Santa Cruz, California who brought his George Barris tweaked ’31 East having a little fun on n on the sand in Wildwoods. The flathead V8 powered ride edged out Clay Slaughter’s pretty T-V8 at the finish line.

Longtime rodder and racer Denis Varni from Los Gatos, California came to spectate in ’14 and had so much fun he went home and built up this little banger-powered T on A rails for this year’s (’15) race (JMC_5684). He’s matched up with Ted Haarke from Long Island, New York in his blue ’29 also powered by a banger. Denis won this one. By this time we also got a little smarted and stood next to instead of behind the cars when they departed to avoid sand baths.

The Gentlemen thing kinda goes out the window when the drivers put on their race faces (JMC_5689). George Gudat III out of Toms River, New Jersey in his 286″ flattie powered ’33 three-window looks pretty serious while Scott McCann out of the Denver area in his former Bonneville roadster powered by a 239″ flattie smiles all the way to the finish line.

Just like in the good old days, results were kept on a board. This one wasn’t chalk on slate but in 50 years we hope some historian will be glad that fools like us took the shot.

Time to get back to sorting shots so we’re outta here. 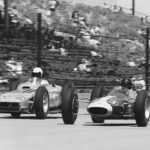 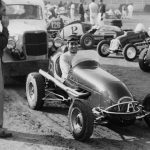 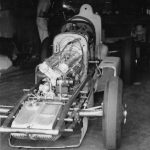 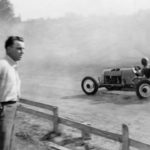 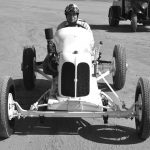 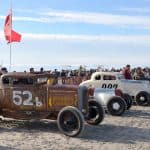 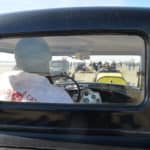 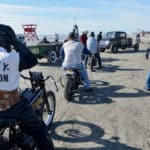 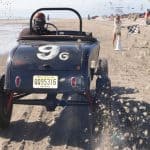 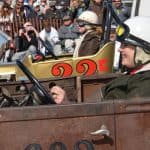 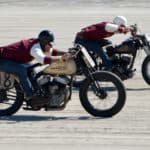 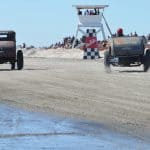 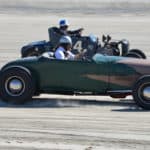 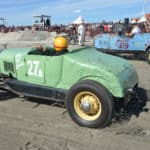 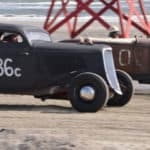 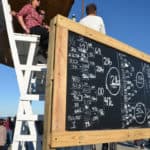 Previous Post: « One Bumpy Road
Next Post: Sixteen Posted and Thousands More to Do »
↑ Top of Page