Normally weekends are the whackiest times for the AHRF as we’re out and about shooting the ol “in twenty years it might be famous” doings. You could say that this last week turned into an almost everyday deal to with the L.A. Auto Show on Tuesday, Isky’s on Wednesday, the 75th Annual Turkey Night Grand Prix on Thursday, the WRA cars running at Wilow Springs on Friday, the 20th Annual River City Reliability Run on Saturday and another rod run up in Palos Verdes on Sunday. Let’s call this one full plate week.

Naturally, things didn’t work out as planned. It started with nasty traffic getting into downtown L.A. for the show and then today’s too hi-tech camera flashing ERROR making it unusable. Drat! After the show, it was off to our camera store to get an answer. The store folks fiddled around for a while and got it working again. Cool. A trip to Perris for the Grand Prix on Thursday resulted in you guessed it ERROR again so two maybe major events are now down the toilet.

Friday is the nastiest shopping day of the year and we had to face this mess as it was time to buy a new camera body as we couldn’t dare miss more cool stuff for you. Needless to say, it was walking out of the store an hour or so later with a new one. By that time Willow Springs was out of the question.

As pay-back for technology leaving us in the lurch lets start out this week with a shot that some might call important. We see Gene Winfield’s Reactor that was snapped at the Grand National Roadster Show back in 1966 (GHC_087). Gene had hired Chrysler stylist and Art Center graduate Ben Delphia to sketch him a wild show car and this was Gene’s finished results. Gene would eventually but the car back from its owner Joe Kizis and started renting it out for movie and TV work. You may have seen it in The Invaders, Bewitched, Batman and naturally, Star Trek. It later ended up at Cars of the Stars and the National Automobile Museum before Gene got is back again and restored it for the 50th GNRS in ’99. Thanks to Gary Hartsock we have it for our archives.

Not ones to cheat you out of the L.A. Auto Show experience we present this out-there wheel seen on an AMG-Mercedes Grandde got is back again and restored it for the 50th GNRS in ’99. Thanks to Gary Hartsock we have it for our archives.

Not ones to cheat you out of tut of t Tourismo concept car at the ‘13 show (JMC_4835). Or how about this Infinity SUV concept snapped at the same show (JMC_4845). For the performance enthusiast, we present the front suspension of the Red Bull Racing RB5 Formula 1 Car (JMC_4840).

At Perris we picked up this program for the 75th Anniversary Turkey Night Grand Prix for the “Mighty Midget” race cars (JMC_5876). This race has taken place every year since 1934 except during WWII. We sat with Andy Casale whose dad Ernie’s car won the race twice. Johnny Parsons and Bill Zaring are just two of the numerous famous shoes who manhandled Casale rides. We also ran into 96-year-old Louie Klineau who raced at the lakes before WWII and AHRF Pioneer Don Zable who was at the first race in ‘34. The 98 lap feature race was a great one.

We always are uncovering cool old stuff. How many of you remember this Volume 1, Number 1 issue of Rod & Custom Models from June 1964 (JHC_1499)? Many future rodders spent their youth from about ‘55 onwards honing their hand skills with these little plastic gems.

While talking about number ones, how about this first issue of the enlarged version of Rod and Custom from August 1961 (JMC_5888). Neal East’s beautiful bronze Deuce graces the cover. Note the Balsa surfboard in the old-school Deuce and the foam board laying near Neal’s new ride.

This interesting shot shows the main drag of Visalia, California back in 1972 packed full of just a few Roadsters (DOT_829). It makes you wonder if this was the culmination or the beginning of a Hot Rod adventure.

The picture above sets up for our Saturday morning adventure, the 20th Anniversary River City Reliability Run (JMC_5886). Maybe 100 of the coolest rides around assembled for the run and have already signed in and applied their number sheets. Our host Mark Morton put on the first RCRR run back in 1995 and is seen third from right checking his cell phone to see if it’s time to move em out yet.

Our own David Steele brought the old Tom Spark’s Roadster Pickup to the party (JMC_5887). It and the gathered throng is ready to rumble.

After a traffic jam exiting the parking lot some of the cool rides are captured easin down the road (JMC_5884). It was so cool to see all the passer by’s giving thumb’s up’s to the hero rides.

In the Driver’s Rider’s meeting, Mark let us know that we’d be stopping for a short break at the side of a reservoir (JMC_5884). His slick ‘29 on the left led the parade. There was a great mix of cars on the run like the third car in the picture, an Allard J2X, that just happened to be stuffed with a Hemi.

A couple of minutes after we stopped, everybody thought we were under attack by some aircraft carrying Russian Markings (JMC_5881). Truth be told Mark and his buddy who owned the Allard had set up this little display for our benefit. Kudos and lots of points for this one. Best of all we got a buzzing and a wing wave by the pilots. Wow!

Another stop was at a mini-mart. Ditto with the thumbs up for all the participants from un-expecting spectators and another log-jam getting back on the road (JMC_5883). This one was snapped over the windshield and is almost in focus.

We all pulled into Mark’s Yard with a beer waiting and even found a space to park. The food truck had just arrived and everyone scooted to partake while we were hard at work snapping just a few of the neat rides at rest for you. And yes the cold beverage was good.

We shined on the Sunday Palos Verdes gig as the old bod needed some rest and there were some new pix to go through for you.

Hope you all had a great Gobble Gobble. 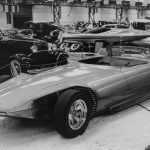 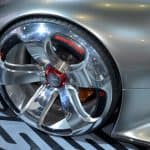 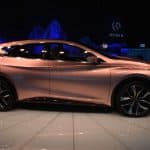 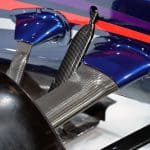 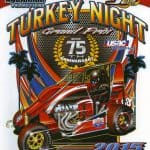 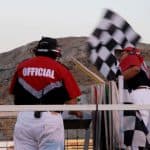 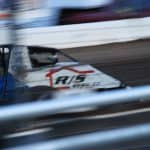 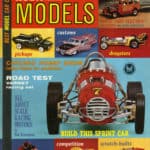 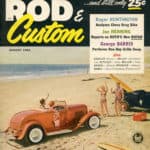 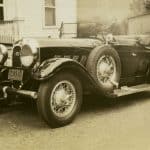 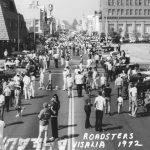 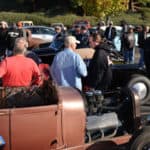 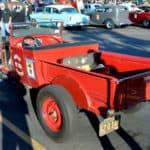 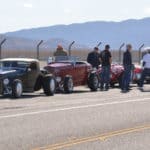 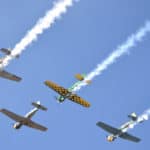 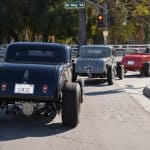 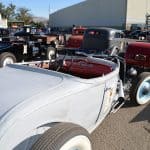