A few months back we got a big shot in the arm with hundreds of great old pictures from our pal Joe Henning. I paid another visit to the wizard of illustrations this week and again have returned with yet more fantastic goodies.

In the previous bunch of shots from Joe, we had run across five little 2″ x 2″ prints that we determined were taken back in 1948. We came to that conclusion because three of the five shots were taken at Indy and cross-checking with pix from our Jack Fox book on the race’s history from Joe and found the attached shot (JHC_1103). It had the same number stamped on the back as our earlier group so we’ve deduced that it was taken at the same time. In the picture, we see a close-up of Stu Hilborn’s first experimental fuel injection atop a 21 stud flattie. We have determined that the shot was taken on either July 17th or 18th, 1948 at the third S.C.T.A. meet of the season as this was the first time that Stu had used the FI setup that year. This shot is also historic in that driver Howard Wilson became the first driver to run over the magic 150 mark at the lakes with a speed of 150.50 mph.

We’re always gathering reference materials and one of our latest finds is this new book by David Temple (JMC_5509). If you like Custom and Show Cars then this book is a must for your library. Temple covers the General Motors Motorama that ran from 1949 to 1961 and the cars that made us dream. Rides like the Corvette fastback they called the Corvair, the Pontiac Club de Mer and the Firebird III double-bubble are but just a few of the “I remember that one” that are covered.

When Joe Henning was Art Director at Rod & Custom he was constantly on the search for new talent. One of his “Finds” was illustrator William A. Moore. We just happened to discover one of Bill’s original concept drawings for a bubble-top Sports Car among Joe’s treasures and he kindly let us borrow it to share with you (JHC_1109). When Bill was a youngster he won a scholarship from the General Motors Fisher Body Craftsman’s Guild so you could say that those dream cars affected him too.

While on the styling theme we just ran across J. L. Elbert’s book on Duesenberg automobiles published back in 1951 by Dan Post (JMC_th you (JHC_1109). When Bill was a youngster he won a scholarship from the General Motors Fisher Body Body 5508). It covers most of the outstanding coachwork these cars wore. As a plus, the book is filled with illustrations by Strother Mac Minn like the one seen on the cover.

Since we’re into speedsters how about this Mac Minn drawing from inside the book showing David Abbott Jenkins streaking across the salt in the Duesenberg built Mormon Meteor (JMC_5505). Zoom.

We ran into our pal Bob Barmore at the last El Mirage meet and he slipped this old Harmon & Collins Timing and Cam Installation Tag to us (BBC_010). The cam was for a ’42-’48 Ford Flattie and tells us almost everything we need to know about installing it. We call it Cool. Thanks, Bob.

There is something about a container full of trash that says please look at me, especially if there is a car picture on top. After checking every last piece of paper in it we ended up with one salvageable piece that is worth its weight in gold (JMC_5510). Under the Auto Races headline, it says New San Bernardino Speedway, Tri-City Airport. Our research revealed there were several tracks over the years in the Tri-City Airport area but we think this flyer is possibly from the Tri-City Speedway in Colton, California that was a 5/8 mile dirt oval that ran from sometime in 1933 to February 17, 1935. Yes, we do like trash.

This Speed and Spray magazine from April  1953 was in another box headed for the dumpster before we rescued it (JMC_5496). Upon inspection, we found that the Eddie Meyer logo (designed by George DuVall of windshield fame) on the cover wasn’t printed on it, but was an actual decal. A look inside revealed it was  Volume 1, Number 6 and when we got to page 18 there as a great story with photos on Eddie “Pappy” Meyer by one Kenny Harman of cam grinding fame. Could getting the Tag from Bob been a good omen? We think yes.

Our next to last shot today shows “Pappy” Meyer leaning on the car with a package. It looks like he’s a happy fellow as does his riding mechanic Myron Stevens one of the Robson boys I talked about last week.

Fast forward a couple of years to the very first S.C.T.A. meet held on May 15, 1938. We see the same Pat Notary car now being run at the lakes by Pat Campea and Harry Oka (PCC_070). It was now powered by a Riley 4-Port. Pat drove the car 118.1 mph and 120 mph. The weather this meet doesn’t look to good but by the end of the year, the team finished the ’38 season in 9th place with 20 points. What makes the car extra special is that it was the first race car that young bodyman Frank Kurtis ever worked on.

Another great image from the Knox Collection is this fabulous action shot of roaring roadsters that was taken at San Jose Speedway back on September 11, 1938 (CKC_2196)  The “Suicide Bowl” as the track was dubbed only ran four races that year under the new management of Charlie Curryer, two for “Big Cars” and two for roadsters. We see Gene Figone in his Chevy-Ford hybrid leading in the early stages of the last race of the year. Gene went on to win it.

Geeon the right after just having won the May 6, 1934 AAA 250-mile Roadster Race at Oakland Speedway. After tragedy in practice and threats of prosecution from District Attorney Earl Warren to make the track safer, the situation was righted and Louis and Myron started the race down in 11th in the 20 car field. After two pit stops for gas, oil, and water, the pair brought the Bill Froelich sponsored ’34 Ford home in first place.

Since July 4th is a special day for us American’s, we thought it only fitting to end this week’s story with a BANG. Here’s a picture of Paul Berry’s “Firecracker” that enlisted the driving talent of Bud Meyer back in 1941(JMC_5503). On this occasion, Bud’s dad Eddie went along for a ride. 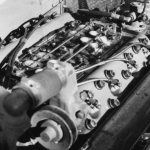 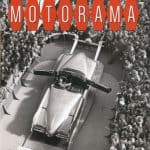 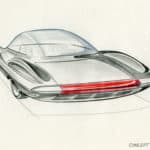 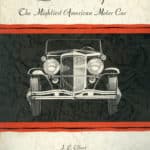 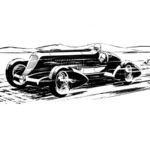 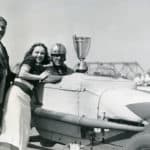 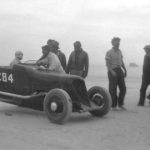 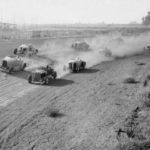 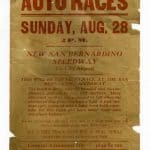 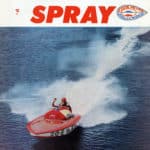 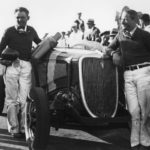 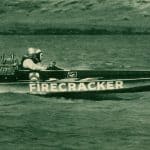