We took a little break from scanning the first part of the week and dug into the archives. We’ve got lots of old shots just waiting to get words to go with them so here are a few for you.

Let’s travel back to the year 1941 to have a look at a ride that was named “Polecat” (DOT_683) from the Julian Doty Collection. We see Low Flyers member Melvin Straw in his number 342 Model-T powered Streamliner fitted with an S.O. Fronty head getting some looks at Muroc on August 24, 1941. We speeds on the carat this meet but in June as a guest, Mel ran 105.01 mph. Car number 107 in the background was run by Idlers member George Thompson. It ran a milled V8. Again, we don’t have any speed on the car since good record keeping was an afterthought back then. Earlier at the June meet, George ran 105.14 mph.

You don’t see many shots of Walkers member Danny Sakai’s car sitting still (DOT_686). The slick little Modified was snapped at Muroc during the 1941 season and was powered by a 24 stud flattie fitted with Mal Ord intake and heads. At the June meet it ran 125.52 mph. At the July meet it ran 121.89 mph. At the August meet it ran 119.21 mph and at the September meet it ran 126.58 mph. Sadly a little over a month later Danny would crash into a telephone pole street racing and not survive. The car ended up being run by Willett Brown right after the war and then disappeared. In the background is the number 276 Ford V8 ride of Glendale Ramblers member Yam Oka. Yam’s fastest speed during the year was set at the first meet in June at 109.48 mph.

Lets fast forward 25 years for some more cool pictures that we got from Gary Hartsock. Lenny Byer from Brentwood presented his Poppy Red ’29 Ford Roadster for all to see at the 1966 Grand National Roadster Show (GHC_236). That a ’56 Chevy V8 in the engine bay that’s hooked to a ’39 Ford trans that feeds a ’40 rear end that was fitted with a quick change. Inside there’s a modified Deuce dashboard and black diamond tufted Naugahyde. That’s a ’52 Ford steering setup and let’s not forget the chromed running gear and a step-plate on the running board.

Joe Cardoza from San Jose showed up at the ‘66 GNRS with this beauty (GHC_237). The 1929 Ford Roadster Pickup was powered by a 322″ 1956 Buick Nailhead. It was hooked up to a ’39 Ford trans fitted with Zepher gears naturally. Out back the bed was shortened 10″ and the fenders bobbed. It was all covered with Naples Orange paint that complimented the black Naugahyde interior.

The 1966 Grand National Roadster Show Program listed this car as ‘Oldie but Goodie” but owner Shelton Jepson had other ideas and did a new show card calling the car “Loaded Toad” (GHC_238). Whatever you call it, the car’s a winner. Starting with a 1930 Ford two-door sedan 5 1/2″ were taken out of the front and 4″ out of the back to give it one mean chop. Those spoke wheels on the front running on chromed ’40 Ford suspension give it a nice in the weeds look. That’s a ’57 Olds under the hood that feeds a Hydro and a Olds third member. ’56 truck steering hung from a ’32 Chevy dash are some of the interior mods. It’s painted British Racing Green and Black but we bet it didn’t like to go around corners.

Last week we showed you a shot we labored over to un-stick and save. In the same batch but never stuck was our next shot that was taken back on August 29, 1920, or some 95 years ago (JHC_1376). This was shot at the start of the Eighth Annual National Road Race held in Elgin, Illinois. On the pole, we see Ralph De Palma just pulling away from the starting line in his number 2 Ballot. Filling out the front row was Jimmy Murphy in his number 12 Duesenberg. On pole in the second row was Joe Thomas who replaced an injured Eddie Hearne in the Revere. Behind Murphy in the number 10 Duesenberg is Tommy Milton. In the third row on the pole is Eddie O’Donald in another Duesenberg and to his left is Gaston Chevrolet in a Monroe. De Palma went on to win the race in front of 60,000 people and collected $6,000 bucks for his effort. He also received a Trophy Cup and $3,000 in lap prizes for leading every one of the race’s 30 laps. Not a bad payday in pre-tax days.

From the same group of shots, we see Italian Ace Tazio Nuvolari captured hard at work behind the wheel of his Alfa-Romeo 12C-36 during the 1936 Vanderbilt Cup Race held on October 12, 1936 (JHC_1378). The race was held at Roosevelt Raceway on Long Island in the town of Westbury, New York (about 17 miles from Manhattan). Nuvolari started the 75 lap, 300-mile race in eighth position and after four hours, thirty-two minutes and forty-five and one-half seconds crossed the finish line in first place. That’s an oil cooler hanging off the side of the car. For you eagle-eyed folks just to the left of the number 8 is the car’s entrant’s logo. Look familiar? It should it’s a prancing horse on a yellow background that was used by Enzo Ferrari when he was running the Alfa-Romeo factory racing effort.

Mixed in with the old stuff is another great shot that just happened to be taken by Erik Rickman on a nice overcast day at San Gabriel Dragstrip back in 1962 (JHC_1379). We see a guy called Television Tommy Ivo shoeing his Ivo Red “Barnstormer” and wearing C-T Stroker markings. Yep, that’s Tom’s white ’62 Cadillac “Tow Car” in the background. Tom and Rod Peppmuller had teamed up to build this one, the first of a dozen 124″ wheelbase chassisied wondercars. It’s possible that this was the same day that Tom had a match race set up with Don Prudhomme in the Greer & Black car.

We keep finding odd-ball stuff amongst the Joe Henning shot’s we’re scanning. Take for example our next image (JHC_1389). Seven fantastic photos were cut up and taped together in an accordion fashion to use as a presentation piece to sell a film idea. We don’t know what became of the project but we saved what was left of the photos. There’s Parnelli, A.J. the Foyt, A.J. the Watson and Ken Miles to name some of the players.

We just had to fix one of the shots for you (JHC_1388). This one shows the multi-talented Ken Miles in a Cobratakee at the First Dodger Stadium Sports Car Race held at Chavez Ravine back on March 2 and 3, 1963. It was taken by the now famous photographer Dave Freidman. We didn’t know it then but the Dodger Stadium race would go on to be a historic event in that it signaled the end of Corvette domination in the Production Sports Car races at the time. Miles finished second in the race and his teammate Dave McDonald in another Cobra came home the winner.

To add a little frosting to the above shot we present an original ticket stub from this very race (JMC_526). Note it only cost $3.50 to see the race and see those new fangled hot rods from Carroll Shelby called Cobras trounce Dick Guldstrand’s mighty Corvette.

If you happen to like Corvette’s you’ll love this book if you can find one (JMC_5631). Michael Antonick penned this one back in 1990. On the cover, we see Bob Bonderant in the Washburn Chevrolet sponsored Split Window leading Dick Guldstrand’s Baher Chevrolet sponsored roadster and Ronnie Bucknum in another Slit Winplit Window. That funny car on the right is the same Cobra seen in JHC_1388. This was shot at Dodger Stadium where Dave McDonald won in a Cobra and Miles finished second. 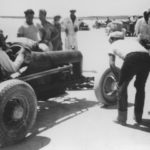 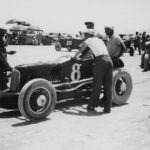 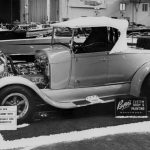 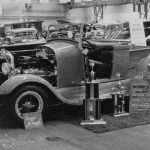 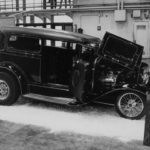 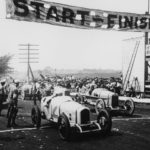 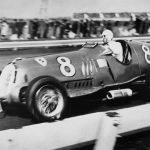 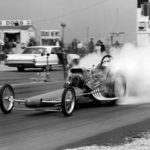 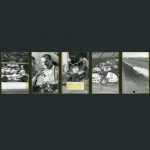 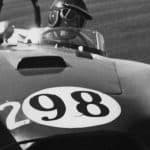 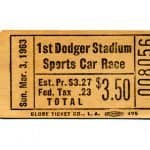 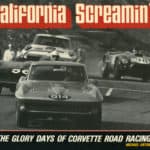