When we get print collections we do a pre-sort before scanning and group them according to the good old stamped number on the back courtesy of whatever photo lab printed them. Doing this is a big help as we can usually match up what shots were from what roll of film. This little trick makes it a lot easier to date and then identify what’s in the images.

When pictures were taken back in the day most of the time the “enthusiast” shooter would usually use the whole roll (sometimes more than one) on a singled printed ASAP. That makes our job a lot easier. But then again, we have found some folks who were a little stingy with the “push the button finger” so we’ve seen prints from the same roll of film that has stretched out over a year. Ouch. Either way, we’re happy to get whatever we can.

We just finished scanning a group of 40 plus prints from the ’40s and are constantly amazed at what shows up. Let’s look at a few of them from Martin Kocher who’s close to 90 years young. First up we find the ride of Howard Wilson, a member of the Low Flyers, waiting in line to run at El Mirage wearing car number 117 at the June 2, 1946, S.C.T.A. event (MKC_017. Howard ran a Winfield head on his Ford Banger and ran 119.04 mph. To the car’s left, we see the nose of Lancers member Kenny Lindley’s Modified that ran 128.02 mph.

After driving this car to work during WWII and turning a lot of heads, Doug Caruthers brought his soon to be even more famous than it already was Modified back to the lakes on April 28, 1946 (MKC_019). He’s seen peeling out from the starting line. Under the hood was a Merc V8 fitted with Thickston heads. Doug ran 129.49 mph at this S.C.T.A. meet. Note how many and how close the spectators are to his car.

Next up we see Sidewinders Car Club member Major Gilbert who ran this slick-looking Deuce only once during the 1946 season (MKC_021). He’s seen at the June 2 meet where he turned 104.16 mph. At the time Major was the one who stamped all the Timing Tags for the S.C.T.A.

This shaky shot shows the ride that belonged to Sidewinder member Art McCormick (MKC_025). He put together this customized ’29 Ford for the street that is seen at the June 2, 1946, S.C.T.A. meet where Art was just spectating. His ’41 Merc power plant was warmed over with Weiand heads and cam, Navarro 4-carb manifold and a Spalding ignition. Up front Art used a post-’34 Ford split wishbone spring and axle assembly. The spring base was wider and in front of the axle that gave a smoother ride and lower stance. Art would later repaint the car blue, have budding starlets photographed with it, run at the lakes and show it off on the show circuit.

Last up from Martin we see Johnny Blair of the Gophers kicking up some dust after leaving the starting line at the May 25, 1947, El Mirage meet (MKC_031). Under the hood was a Ford flattie running Thickston heads and intake. John cut a lap at 117.34 mph in his Class C Roadster. To put it into perspective, top dog in the class that day was Framph.

While doing research on images we’re always back and forth between our reference binders and other shots from the same event or period. This one popped up in a search so enjoy (DOT_846). Back in April 1946 old “Bailin Wire” himself, Chuck Spurgin, decided to bring his pre-war roadster out of mothballs and give it a go. Powered by his old Chevy 4-banger circa 1925 he surprised himself and ran a lap at 105.01 mph. Considering his last run was back on July 19, 1942 at 112.50 mph, the cobwebs must not have taken over totally. Next time he showed was on May 25, 1947 when he and his new-old partner Bob Giovanine decided to go for it with the old ride. They ended up running a lot better 114.94 mph out of the box. An S.C.T.A. Championship wasn’t far off for the boys.

To set up our next couple of shots, in the early thirties there were a couple of Speed Shops. To set this up first, at that dealt with Ford banger hop-up parts. One was Bell Auto Parts and the other was Lee Chapel’s. Used up parts from Ascot/Legion Ascot made their way to these emporiums and before you knew it to the dry lakes. When Ascot closed some of the speed buggies that ran in circles at the track they made their way to the lakes sans tails or with other mods. Long story short, the original California Lakes Modifieds and Streamliners and Track Roadsters probably owe their existence to the roundy round cars from Ascot.

So, during the week we tackled another box full of 8” x 10” prints that were all from the thirties. Most of the pictures in the box were from Legion Ascot that was just a hop skip and a jump from downtown L.A.

In ‘31 Quinn also ran it as the number 2 Gabhart Special before defected to his own car, the Dayton Thoroughbred Special. For ’33 Al Theisen drove it as the Vance Special. In ’34 we have Hal Balmer and Floyd Roberts both driving it as the number 7 Gabhart Special. And finally, in ’35 we have Harris Insinger and Ora Bean driving it as the Garnant Special number 12. You have to keep in mind that some fancy Miller/Miller Marine powered jobs were running but the T and later the Model A/B’s were real stump puller’s and could really pull exiting a turn, especially on shorter tracks. One only has to look at the dry lakes to see that bangers regularly beat Ford flat-motors before the fill and mill, aftermarket heads showed up.

Our next shot shows the opposite extreme of cubic inches wins (DBC_863). Let’s start with the engine. Take a Hispano-Suiza V8 Aircraft engine and cut it in half, you’re left with a 358” SOHC inline 4 that buzzes to all of 2800 rpm and has torque out the kazoo It took a special driver to handle one of these beasts and that why we see a young Rex Mays behind the wheel at Legion Ascot Speedway in 1933. The owner was Paul Fromm. That looks like a young Leon Duray standing on the left but isn’t? Between Rex and our mystery man in the background is Leonard DeBell’s So. Cal. Plating shop truck designed by George DuVall, you know, the windshield man.

Sixteen years later one of the favorites to win the 1949 Indy 500 was guy Rex Mays again, whose seen behind board behind the wheel of the Novi Mobil Special on pit lane (EMC_030). Rex qualified the car in second starting spot with a speed of 129.552 mph behind his teammate Duke Nalon. During the race, and living up to its reputation, the Novi developed engine trouble and dropped out after completing only 49 laps. The Mays man was classified as finishing in 25th spot. Six months later on November 6, 1949, Rex would die in a crash at the Del Mar horse track in a Champ Car race.

Naturally, we have to include some Land Speed stuff in our story but this one has a twist (CKC_815). We see Stubby Stubberfield and riding mechanic, Bert Lustig, who put the brutish Cummins Engine Company’s Diesel-powered car on the grid in 29th spot for the 1934 Indy 500. Augie Duesenberg built the chassis and body in his Indianapolis shop. The engine was an odd-ball 4-banged displacing 363.8″ and was of the two-cycle type. Yikes! Stubby qualified the red with white numbered car way down in 29th starting position and drove her home to a commendable 12th place finish. Now for our land speed twist, on March 2, 1935, the red car with white numbers turned into a record holder when it was taken to Daytona Beach where “Wild” Bill Cummings drove it to a new one-mile record of 137.195 mph on the wet sand.

The boys at Cummins Engineering Company were gluttons for punishment when they decided to see what their Diesel engine would do at the Brickyard in 1950 (DBC_247). They hired Frank Kurtis to shoehorn one of their 401″ inline sixes’ into a new ride. Driver Jimmy Jackson could only manage a 129.208 mph qualifying speed, the slowest in the race, and had to start down in the 32nd position. In the race, he fared no better as the supercharger gave up after 52 laps for a 29th place finish. This time they said forget Daytona and took the car to Bonneville in late August, and in early September driver, Jackson set six U.S. and six international speed records. His fastest speed was 165.23 mph.

We can fast foreword to January of this year at the Century of Speed exhibit at the Grand National Roadster Show to see yet again the number 61 restored to its former glory (JMC_4910). Note the car ran disk brakes way back when and yes it was green. One wonders where the peanuts were/are (old-timers will get this one). The blue car in front of our green machine was originally raced in960 1960 with a Falcon six in it. It went by the was named Golden Commode. Journalists were kind and renamed it the Pumpkin Seed when it’s driver got into the Bonneville 200 MPH Club. 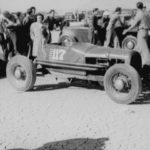 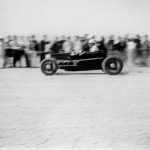 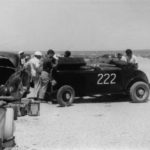 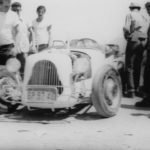 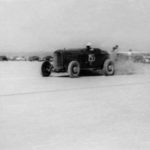 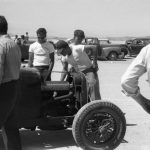 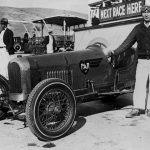 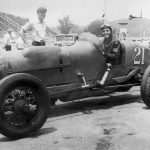 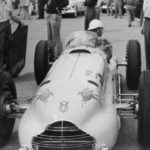 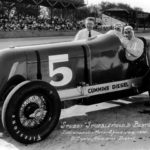 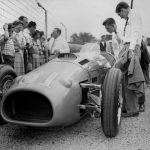 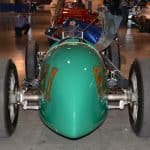