It seems we are always running across stuff that nobody seems to know anything about. That’s a good thing unless you have to do some research and put it into the timeline of hot rod history. A perfect example is a hard to read blueprint we just ran across dated June 25, 1963 that shows a layout for a dragster chassis (DOT_965). Like most good blueprints, in the lower right hand corner there is usually an information box and our new find just happened to have one, so let’s start our search there.

How many of you have heard of Car Craft Machine? We hadn’t until a couple of years ago when we were researching a belly-tank lakester. Car Craft Machine was located in a little garage in an alley in the metropolis of Burbank, California. Thanks to our tank sleuthing we know the proprietor was one Teddy Worbieff. We also have to thank AHRF contributor George Callaway who raced with Ted back in the day and filled us in on a few details. We showed George the blueprint and asked some questions. Next to the drawing date there was the name Capawana. George said it was just some guy that came into the shop one day with yet another novel idea on how to keep the front end of a wheel-standing rail-job on the ground. If you look at the drawing a little closer you will note it is indeed a radical solution. There is a torsion bar setup located in front of where the engine would be. The theory is when you stood on it instead of doing a wheelie, the frame would flex via a torsion bar, and with a little ballast on the front end it would stay planted to the ground so you would be able to steer the thing. Front chassis down tubes on the modern diggers have a saddle that can slide on the bottom rail to achieve basically the same solution. Looks like there really isn’t anything new in the idea world after all.

Since we mentioned the S-J car here’s a shot of it (MEA_018). Jeff Shipley is about to buckle in partner and driver Don Johnson in their Class B Lakester at Bonneville in 1963. After toasting engine parts all week, on the last day it all came together and Don qualified at 259.92 mph for a first in class. After Jeff de-tuned his 300″ Chrysler to make sure it would live, Don two-wayed at 255.501 mph to up the old 243.438 mph record set in ’62 by Tom Beatty.

Up front we mentioned George and Teddy were buddies  (TRC_032). The Car Craft Machine sponsored Class B Competition Coupe and Sedan is seen on its’ trailer at Speedweek back in 1963. George Callaway and Teddy Worbieff were the brains behind the car that started life as a Crosley. Powered by a 300″ Supercharged Chevy they were aiming at the ’59 record of 213.839 mph. They only succeeded in grabbed a first in class with a 197.80 mph lap, just a bit short of the record.

Like a lot of land speed cars, they just change hands and keep on running. If you turn back the clock to Speedweek in 1975 you’ll find the old Car Craft Machine flying the colors of Voss & Marshall (CLA_093). The Crosley is seen all decked out in its Class E Competition Coupe and Sedan guise. Running a 258″ Dodge Hemi for power the boys were after their own record set in ’74 at 178.584 mph by driver George Vose. Verland Marshall got to drive this time and blasted through the timing trap at 185.18 mph to qualify for a record return run. Sadly they left for home without the record. With yet another paint job the car received more glory in 1999 when it was featured on the cover of the book “Bonneville Salt Flats” by Louise Noeth. Today the car still exists collecting dust in a secluded garage in the high desert.

This week we were doing some research on a story of how the dry lake boys ended up going to Bonneville for the first time. In our searching for info, we usually go from one source to the next and back again trying to put everything into a timeline. That got us looking into the “other” Timing Associations as we found some clues that they were also looking at running on the “Bonneville Salt Beds” as they called them at the time. We’re still trying to figure it all out but a few players kept rearing their head like Ray Inner and the Mojave Timing Association so sidetracked here we come.

Arnold Birner goes back to before WWII and forward to Donovan Engineering’s kick-butt race motors with a little bit of everything else thrown in between. We’ll start this sidetrack that shows Arnold’s togram and Russetta and Arnold Birner and the Mojave Timing Association. Sidetracked here we come.

Arnold Birner goes back to before WWII and forward to Donovan Engineering’s kick butt race motors with a little bit of everything else thrown in between. We’ll start this sidetrack that shows Arnold’s tow rig and Class B Streamliner at El Mirage in July 1948 at an S.C.T.A. event (DOT_124). His old faithful ’32 B Motor from his pre-war modified sporting a Riley 4-port was the source of power for the liner. The car ran a credible 141.06 mph with its’ banger for a second in class behind the 21-stud powered ride of Stu Hilborn, who on this very same day, became the first to break the 150 mph barrier at the lakes with a run of 150.50 mph. Arnold’s tow vehicle was a hot rod too. Starting life as a Plymouth before channeling and major messaging, it was fitted with a Hudson straight-8 flat motor. As a side note, this beast was used to tow cars into the Armory at the very first Hot Rod Expo and was reliable enough to have made it to Oregon and back.

Next up is one of our new Vic Enyart shots taken at a Mojave Timing Association meet in 1949 that shows both of the Birner rides again (VEC_008). We have some Mojave info through ‘48 but for the ‘49 Season, we’ve got a big goose egg.

Mojave along with Gilmore, Muroc, P.C.T.A., Arnon, Bell, Western, Tommy Lee’s private meets and Russetta before it became a real Timing Association are all the very first Hot Rod Expo and was reliable enough to have made it to Oregon and back.

From time to time we uncover little pieces of the mystery like our next image showing Louis Senter’s Mojave Timing Association membership card from 1948 (LSS_031). Lou was the sponsor of the V8 powered George Rubio, Bob Morton Model-A Roadster. Mojave as a Timing Organization was made up of five clubs with a max of 20 members each. They were 4 Barrel Club, Bungholers, Rumblers, Lobers and Roadusters. That’s 100 members in total and their selling point was no long lines to waite in to run. Three engine classes and three body classes were it as they liked the KISS theory. Bob Baldwin (of Baldwin and Summerfeld, and later two time S.C.T. A. Champion) was Chief timer and Pres Dog.

Since everybody knew each other in some way or other at the lakes before WWII we get to twist together a little story of how those dirty hot rodders went on to turn more than a few heads. George “Skip” Rubsch le story of how those dirty hot rwas tight with the Mojave guys and is famous for his ride “Skipit”. That’s a good excuse to show the number 67 George Rubsch-Dave West Streamliner entry that was snapped at Muroc on August 24, 1941. Dave handled the wrenching chores on the Ford 4-banger that powered the beauty that was originally built by George’s dad. At the time they were members of the S.C.T.A. Pacemakers Club along with a guy named Stu Hilborn.

Another early lakes racer by the name of Jimmy Travers is seen at Rosamond Dry Lake at the June 25, 1939 during a Western Timing Association meet (JMC_4643). His Model-A was powered by a 4-banger fitted with a Winfield flathead. He ran twice at the meet and recorded speeds of 98.04 mph and 89.20 mph. The jersey he’s wearing was lent to him by Eddie Miller Senior for the occasion and dates to 1921 when Miller was a driver for the Duesenberg Team.  Since the Western Results didn’t list car numbers we can’t tell you whose car number 65 is in the background you whose car number 65 is in the background. By the way, Jimmy was also a friend of Dave West and Stu Hilborn.

Eddie “The Villain” Haddad use to run at Legion Ascot before it was shut down. We’ve also seen his name on a early Dry Lakes roster. This shot shows him in the John Balch early-early 1946 Kurtis-Kraft Midget fitted with quarter elliptic front springs (BHC_234). The car is see in the pits at Gilmore Stadium in ‘46 in this shot by Cy Latour out of Pasadena. The number 20 car was quite famous in the day reportedly making over $75,000 in 1946 alone. The car was wrenched on by the same Dave West that worked on Skip’s car. Dave was also instrumental in getting Jimmy Travers hired to work on the Balch car. At the end of ‘46 or early in ‘47 Balch sold his cars to Howard Keck who just happened to be in the oil business. West and Travers went along with the deal. That looks like Bob Pankratz in the background leaning against the fence near the wall where he shouldn’t be according to the sign because on the other side of it is turn three-four thatrs l cars liked to get sideways in all the time.

Next thing you know Emil Diedt is hired by Keck to build a radical new car for the 1948 Indy 500 powered by a 270” Offenhauser for driver Jimmy Jackson (DBC_260). Travers was still there and West had just left the scene and was soon replaced by another lakes racer by the name of Frank Coon. Our hot rod mechanics were now turning the wrenches on the car seen here in Gasoline Alley that was getting the once over from some interested parties that included Wilbur Shaw who has his hands on his hip in the dark jacket. That’s his electric scooter’s nose peeking in the right side of the shot. Jackson put the car in the race with a new fangled Fuel System to start the race in fourth position. On lap 193 the car broke a front spindle and was classified as finishing 10th. Jackson would finish 6th in the team had a new car and a new driver named Vukovich and almost won except for a broken steering. They came back and won in ’53 and ’54.

Did I forget to tell you, the Travers guy was moonlighting with his bud Hilborn building a thing called the Hilborn-Travis Fuel Injection. The Keck car was the first to use the Injection setup on an Offy at Indy and was clearly faster than carbed versions. It was Rose who insisted to leave the unit on for the race in ‘50 instead of just for qualifying.

Last up and in the same category as Louie’s above Mojave Membership Card, that is stuff that usually got worn out, used up or tossed out, are two more keepers and Bonneville memorabilia fillers. First up is an armband worn by S.C.T.A. Officials at the salt in 1957 (DOT_097). We’ve never seen one before and yes, the car on it is the Kenz & Leslie Streamliner. Last up is another survivor in the form of a never used BNI Member Decal that also features the K&L ride and is from 1978 that also happened to be Bonneville’s 30th. Way cool. 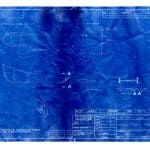 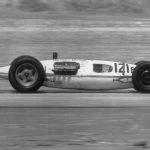 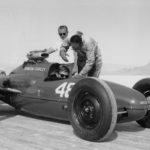 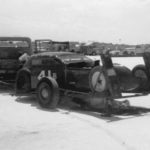 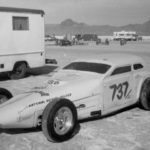 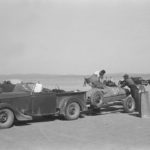 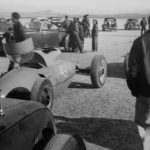 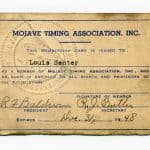 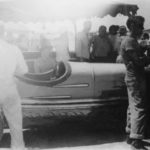 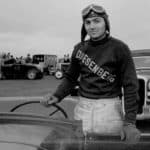 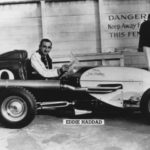 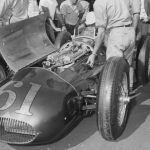 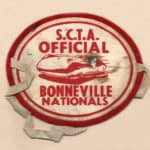 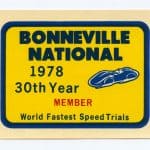 Previous Post: « Fixin the Old and Shootin Some New
Next Post: From Dirt to Pavement in Nine Shots »
↑ Top of Page