This week we finished off scanning and retouching all of Texanite Sonny Rossi’s shots and are now working with him to get more details on his rides. One of the most fascinating of them to us is SRC_005, his home-built this three-wheeled drag machine. It used a 650cc Triumph for power and lots of “Junk Parts” according to Sonny. It also turned a credible 140 mph in the quarter. All we can say is Viva the early days when back yard builds were the norm and Ride Em Cowboy.

Last week we showed you a “B” Movie Poster featuring Ak Miller’s wild sports car. In the same group of old Lobby Cards, we ran across another keeper from an early day star that was class “A”. This one (JMC_4634) is for a movie called “The Speed Maniac” staring Cowboy Star and car guy Tom Mix. The movie was released way back in 1919 by Fox Film Corporation and was Mix’s 215th movie out of the 300 he made. Looks like the race driver always got the girl in the flickers. For a little trivia Mix bought an old horse arena and kept it for years before selling it to the Brothers Bonelli. If that name sounds familiar it should for it later the brothers renamed it Saugus Speedway. That’s where a bunch of X lakes-racers turned track-roadster racers learned their trade before moving on to places like Indy.

In one of our many boxes, we found over a hun-and-a-quarter 5” x 7” prints of dubious character. We got from “Bandit” Joaquin Arnett and they definitely needed attacking. Our next few images show you some of them.

First up is ARN_003 that we can place at Lou Senter and Lou Baney’s Saugus Drag Strip sometime in the early ’50s. Our subject is Mr. Shoe himself, Art Crisman, in the number 25 Icon that was fitted with a flat motor at the time. Did the whitewall slicks and spectator protection.

In the same group, we found this shot of the Jim Culbert car at the lakes that was a later run at Bonneville in ‘55 with a long tail (ARN_004). See the September ‘55 issue of Hot Rod of it being rebuilt and with a Chrysler stuffed in it.

If both the above shots seem a little screwed up exposure wise yre wise you are correct. Just have a look at ARN_007B and you’ll see what we started with on this shot taken at Pomona Drag Strip. This is what they call “fogged”, or the paper had been exposed to light before being printed. ARN_007C shows what we came up with after a little manipulating. We’ll remind you that you should never throw away old stuff that’s screwed up. Sometime down the road technology will make it possible for us to fix even the most screwed up neg or print.

This week we took a little trip down to Orange County to celebrate a birthday of one of our racing friends (being the good folks we are, we won’t reveal the name or age to protect us from getting shot the next time we meet). While on this mission a stop at Richard Parks house to kill some time and do a little bench racing was in order. While there it always shows and tells time in the collectible’s department. In one of his boxes (seems we all have boxes with stuff in them) he ran across an envelope that said give to Jim Miller that he had forgotten about. Inside were 11 shots that were taken at a Mojave Timing Association meet held at Rosamond way back in 1950. Naturally, our records end with the ‘49 season so it’s anybody’s guess who the players are in these shots at this time. The original giver to Richard was Vic Enyart so the next time we meet (El Mirage in May) it will be quiz time. In the meantime, VEC_001 shows a cool ‘30-’31 with skirts and some to die for pipes. It isn’t fixed yet so don’t mind the fold down the center.

VEC_002 is even a cooler ride. Yeah, it’s just a Deuce but dig the chromed grill shell and the DuVall windshield. Better yet in the esthetics department is the radio antenna has been bent to match the angle of the windshield layback. Note also the massaged headlight bar and what looks like ‘34 Chevy headlights. This one looks cool still.

Hanging in Richard’s office was a sad-looking picture frame that was about ready to head for the floor with a thud. Inside it just happens to be our next shot that was taken at Bonneville and shows John Cobb’s pre and post way land speed record holder (RPC_015). The shot by itself is to die for but get a load of the inscription on it— “This was a tough record to break” that was penned by the autographed, Craig Breedlove. We call this way cool and an extra special piece of history. Thanks, Richard.

While we’re on the LSR kick check out our next image (JMC_1363). What we see is a concept drawing for Mickey Thompson’s Challenger I that was originally drawn by George Hill of Hill-Davis City of Burbank fame and appeared in the November ‘59 issue of our favorite hot rod magazine. Knowing what we do today about airflow over wing shapes, if this car had lost a rear wheel it could possibly have taken off like so many of the original streamliners did.

On Sunday (today) it was take a little trip down to Don Prieto’s 2014 edition of the “United States Food & Gas Championships” party. There’s always cool people, great food and slick rides to get in trouble with. Let’s have a look at some of the fun. First up is the public debut of the old “Sidewinder” drag car that was driven by Jack Chrisman back in the day (JMC_4641). After a year of work going through the car it started just fine and made the coolest sounds out of those eight pipes that were directed at your shooter. Couldn’t stay there long though as the noise of the wall I was leaning against and the dose of unburnt nitro said vamoose. On the left, you can see the Ed Pink “Old Master” Mike Snively driven rail that had just made noise for us and on the right how about the Connie Swingle driven Garlits “Swamp Rat” being made ready to cackle. Wowza!

We just had to show you Mike Kuhl actually doing some work. Yep, he’s keeping Glen Way’s 2013 Groundshaker Jr’s 410cid pistons moving up and down with a little squirt of you know what. The original Groundshaker won it’s class at the ‘69 Winternationals and held records at Irwindale and OCIR. Its speed was 207 mph and its time was 7.67 seconds. That’s movin’ for a Fuel Altered back in the day. 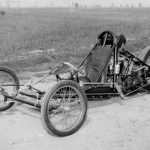 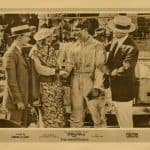 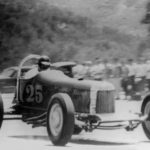 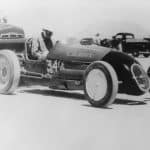 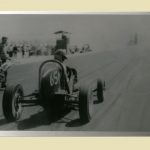 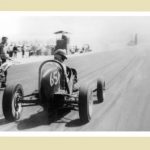 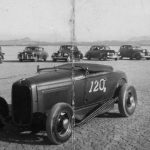 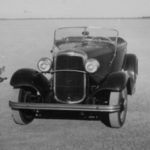 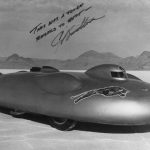 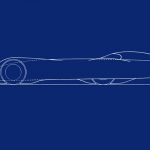 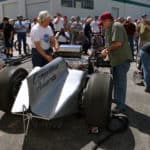 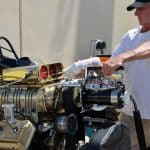