After sorting and filing maybe a hundred rolls of old George Callaway shots some time back there were a few random images left in the bottom of the box they came in. This week said go ahead and scan them so we could get rid of another almost empty box. 150 plus scans later the job was done so we present a few for your pleasure.

First up we see Tom V. Keosababian from Whittier, California buzzing across the salt at Speedweek in 1967 in his Class  F Supercharged Coupe and Sedan that was powered by a 164″ Corvair pancake-6 (GCC_407). Tom proceeded to do a lap at 154.10 mph for a first in class. For his next act, he went out and ran two laps in opposite directions to set a new record at 156.971 mph.

George also snapped this really historic shot of Jim Hall at the Stardust International Raceway in Las Vegas (GCC_366). The Can-Am boys were in town for the last round of the 1968 season consisting of 70 laps around a three-mile road course. On lap 58 of the race, Jim accidentally ran into the back of a slowing Lothar Motschenbacher’s Leader Card entered McLaren M6B and got “really big air”, destroying the Chaparral 2G he was driving and almost himself.

We see Bobby Unser visiting the pits during the Winston Western 500 Stock Car Race at Riverside International Raceway on January 21, 1973 (GCC_379). Bobby started the race in seventh in the Holman & Moody entered, Pepsi-Cola sponsored 1972 Ford. He brought the car home in fourth place after completing 186 laps of the 191 lap race and pocketed $4,520 for his efforts. The gent standing behind the tire behind the car’s windshield is Dan Gurney who Bobby drove Indy cars for.

Long gone Irwindale Raceway (the Drag Strip) was another venue where George snapped a lot of shots. We see one of his Pit Permits that let him ply his trade (GCC_438). We also found a bunch of these passes from OCIR and Lions.

Old stickers and decals that adorned race cars years back are real collector’s items these days. We found four of these Keith Black stickers in George’s stash (GCC_431). Cool!

We also did a bit of retouching this week on recently scanned shots. Doug Rasmussen snapped this “Bucket” at the Sacramento Auto Show back in 1966 (DRC_210). It shows Al McCoy’s T Roadster that he called the “Golden T”. The Hood River,   Oregon resident used a Dragmaster chassis as the basis for his ride and stuffed a 327″ Chevy in it for power.

It’s been a bit warm these days so getting out of the house for a Burger, Shake and a little drive-in action seemed like the thing to do. After scarfing down the eats and drink it was time to find something worth shooting (with the camera, naturally). We didn’t have to wait long as this T cruised in. According to the name painted above the decklid it belonged to Pete (JMC_5158).

Pete pulled in and parked next to a brand new build in the form of a ‘29 A Roadster. We had to snap a shot of the interior for you because it just looked cool (JMC_5157). The Chevy Impala wheel, gauge cluster, and vinyl were finished in Aqua and Pearl.

At lunch Wednesday some friends were doing a little bench racing and the subject of old cars came up. Names were dropped like Frank Kurtis and Bob Sorrell so next thing you know we’re off to have a look. This is one time I didn’t take the camera along to capture some snaps for you but never fear, there is always a backup solution. When I got home all it took was digging out my October 1955 issue of Car Craft and firing up the scanner. Problem solved. We present the car that one got to drool over in the flesh (JMC_5156). Looks like the old rides are still out there waiting to be re-discovered.

This Bill Phy photo went under through our retouch process and shows a hip ’29 that ran in class B roadster (BPC_050). It belonged to Harvey Haller of the Road Runners and is seen at El Mirage on April 24-25, 1948. A ’38 Ford V-8 with Offy Heads, Evans Manifold, Windfield cam and Spalding ignition powered it.

When you look at the above photo you can bet most people are going to think this car is painted a dark color. Well, don’t believe everything you see. Almost all modern black and white film is what they call panchromatic, a type of film that produces a realistic tonal reproduction of what your eye sees. There was also another type of film that was called orthochromatic that wasn’t sensitive to certain wavelengths of light so what appeared to be dark could actually be light. To prove our point we present an unretouched shot of the same car taken with Kodak Ektchrome slide film by the late Don Cox (DCC_085).

Saturday we went down to Orange County for the Santa Ana Drag Race Reunion Picnic then on Sunday Dan Warner and I went up to Simi Valley for the Annual Throttlers Picnic. To add more car junk to the plate we also watched Lewis Hamilton in a Mercedes win the Japanese Grand Prix and Joey Logano’s Ford win the Kansas NASCAR race. Sometimes it’s just plain old hard to get anything done around here. 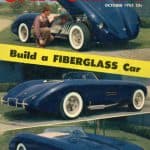 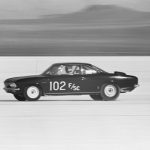 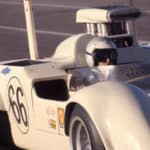 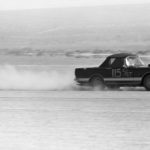 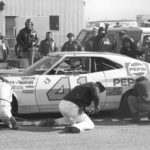 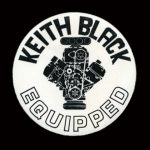 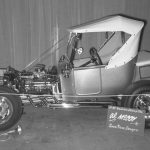 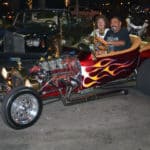 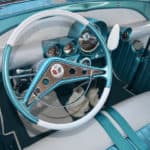 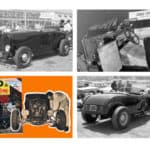 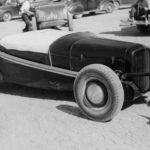 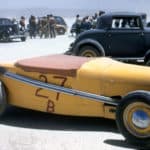