Some cars are built using nothing but imagination and maybe a few chalk lines drawn on the floor. Others are designed down to the last nut and bolt. In between, there are a million ways to arrive at a unique design. Let us look at a few in the flesh and a few that are nothing more than flights of fantasy.

Let’s start off the week with a really wacky show car that Robert Williams called the Druid Princess (DRC_201). The car was from the mind of Ed “Big Daddy” Roth and was shot at the 1966 Grand National Roadster Show. Roth enlisted the talents of Tom Daniel and Ed Newton to help him with the design and waylaid “Dirty Doug” for the glass work and Dan Woods and Jim Jacobs to build the chassis. Larry Watson was responsible for the paint and would soon add purple over the white paint job. The engine was a 383” Dst happen to know a little about its history and can relate that it’s pretty much the way it was finished in1958 except the bubble top has been replaced by what looks like a first gen Corvette wedge and the Rothman used a carb inside the blower shell for ease of starting. Out back was a kid’s coffin that housed the gas tank and battery.

Also shot at the 1966 GNRS is this one of a kind car that wasn’t listed in the program and has Barbery Coast Enterprises painter on the rear fins (GHC_179). Luckily we just happen to know a little about its history and can relate that it’s pretty much the way it was finished in1958 except the bubble top has been replaced by what looks like a first gen Corvette windshield.

Our next shot shows you how the car looked back in in 1959 while on display at the Henry Ford Museum (JMC_5134). Our picture is from a program filled with original prints from the exhibit that was titled Sports Cars in Review 1959. The car is the just finished Virgil Exner Junior design exercise that he designed and built as a way to get his Masters Degree in design. Virgil Jr. took after his pop, Virgil Sr. who at the time was in charge of Chrysler Corporation’s Design Departments and is the man who brought us fins on Chrysler’s and DeSoto’s in ‘56 and Dodge’s and Plymouth’s in ‘57. The chassis of Junior’s dream car started life as a 1950 Fiat unit that was fitted with a lot of Simca parts. When the car was seen by Simca Executives at the Ford showing it was whisked off to the Paris Auto Show to display in their booth to tout their new Talbot marque and caused quite a stir. It also looks like he was a few years ahead of Roth in the bubble department too.

This November 1954 shot taken at Santa Ana shows the Larry Shinoda-Harvey Goldberg “Chopsticks Special” (DSC_055). Harvey is buttoning up the cowl while Lloyd “Bustle Bomb” Scott watches. The Olds powerplant was owned by Harvey. I especially like the “Designer” cardboard flash shield to save the driver from a backfire.

We used the Olds powerplant as a segway into what was initially intended to be the newly designed 1955 model. For some reason, Oldsmobile management decided to release their new Ninty-Eight DeLuxe Holiday Coupe early in 1954. We present three takes on the new ride (JMC_5143). The top one shows a stocker bagged from an ad that appeared in the March ’54 issue of Esquire Magazine. It featured a new “Panoramic” windshield and was powered by a “Peppy” 185 hp “Rocket V8”. Stockers are kinda boring so we took the car and turned it into hopped-up streetster in version two. We nosed and decked it and wasted the name an MGA, Ferrari Testa Rossa, Lotus Mk 11’s, Lotus 7 and a Mercedes-Benz 190 SL.

To continue down the path of out-there designs our next shot, taken on October 24, 1950, has one of those guys standing in the Model A behind the ‘27 (GGC_150). Up front is unknown but the one behind it carrying no. 610 was entered as Weiand-Robinson and flew Trompers colors. The real owner of the car was AHRF’er Don Zable. His partner was a Robinson that worked for Weiand hence the entry name. It was powered by a 296″ Merc flattie fitted with Weiand heads and intake and Howard’s cam and ran 130.43 mph for seventh in class. Anyhow, Don ID’ed soon to be famous designer Larry “Chop Stick” Shinoda as the one standing in the car with Bob Millican leaning on it. As a side note, Don relayed the story that the boys pulled the motor out of their track roadster they had run on Saturday and installed it later that night in the lakes roadster. The next morning they got up o-to early for the trip to the lake. Being young masochists,,eplate on the front fender. We also gave it a “California” rake and thought red would be more appropriate in getting the girls attention. Not satisfied, in our third take, we slammed it into the weeds. We also lowered the lid as well as shaving it everywhere. We also reshaped the rear wheel well to go with the new side trim. We added Dagmar’s to the front bumper and matched them with new red tail lights. To finish it off some gold lacquer was added. Ok, help us fight off the girls.

We’re on a roll now. Inside the front cover of the November 1940 issue of Fortune Magazine was an advertisement for the then-new DeSoto from the Chrysler Corporation. This illustration was from that ad (JMC_5139). It touted Fluid Drive and the girls didn’t have to press pedals in their heels with the new Simplimatic Transmission that gave full automatic shifting in a new, longer, wider low-slung Rocket body (Sounds a little like Pontiac and Olds words to me). The convertible-coupe shown was powered by a,240.

We thought the car was a little on the boring side so set about doing a few modifications to snap it up. JMC_5138 shows the results. We started by putting the car on the ground. Next, we chopped the windshield and added just a little side trim in the best Barris tradition after re-contouring the wheel-wells. That trim motif was carried through on the grill teeth and we modified the bumper guards to go better with it.

Shot at the Stateline Casino on Friday night before Speedweek 2011, we see a Packard Straight 8 motor nestled into what we call a “Designer” rat rod that featured a ‘30-’31 Model A body (JMC_3040). The car is a real head turner with its abundance of rivets. We’re not sure if the motor is a 282 incher of the larger 356-inch job, but we bet it has some torque.

We like great car drawings and the dynamic duo of Art Fitzpatrick and Van Kaufman teamed up to do some of the most memorable automotive advertising art ever created. Art would draw the cars and Van would do the backgrounds. This one was used in a 1960 Pontiac ad and really played up the longer, lower and wider aspect of cars at the time (JMC_5154). The four-door Catalina Vista hard-top sedan had a 122″ wheelbase, weighed 3,990 pounds and was powered by a 245 hp 389″ V8. it sold for $2,842. They made 32,710 of them that year. Political correctness in the form of Truth in Advertising would eventually take over and distorted vehicle shapes would no longer be allowed in ads to sell a vehicle. Bummer.

ThThe reversed writing you see in the gold background is an impression left by the magazine’s table of contents that was on the next page). This was an exclusive vehicle, of the 10 different models of the car offered that year they only built 930 in total with the price hovering around $4,500, quite expensive when you look at a Ford Convertible Coupe that could of been had for $931. The cars used some stock body parts but were basically hand built to custom designs. A fad at the time was the use of cut down doors supposedly for elbow room when you were flogging the car on twisty roads and this Packard featured them.

We’re guessing this shot was taken at El Mirage on April 28, 1946 (EMA_008). The car is Tommy Davis’s old Olds powered roadster that has been changed considerably since Tommy sold it in ‘44. A caption on the back of the photo says it ran 113 mph. There are no matches in the program for this speed at an S.C.T.A. meet. The new and unknown owner cut down the doors (a bad design and hard to hang a tree car we call the “Piranha” today and built by model maker AMT’s Speed and Custom Division in Phoenix (and honchoed by custom legend Gene Winfield) was the brainchild of the Borg Warner Corporation. Their division, Marbon Chemical, had developed a new product called Cycolac that was an ABS plastic and they wanted to showcase the new product. William Schmidt Associates was hired to develop a concept for Marbon that used the new ABS material in a low-cost vacuum forming process that was ideal for forming body parts. The resulting design concept is seen in the drawings that appeared in Industrial Design Magazine around 1963.

Starting with a 1/4″ thick, 6 foot by sheet of Cycolac, it was clamped over a female die and heated to a temperature of 250 degrees, and then drawn by vacuum into the die. after cooling and trimming, you had a perfectly formed body panel. It took about 14 minutes to make one.

A coupe version of the car was built by AMT for use in the TV series, The Man from U.N.C.L.E. that ran from ’64 to ’68. AMT also built a racing version seen in our next shot. Piranha Drag Car fist with Walt Stevens driving and then later with Connie Swingle.

AMT Model Corporation built this wild version of the Cycolac bodied “Piranha” as a show and go car and also to promote its model kit of the car (GWC_037). The Piranha Drag Car was initially driven by Walt Stevens. When the car started really moving Connie Swingle was behind the wheel of the then Nitro burner. This caused a lot of blown engines but also became one of the first full-bodied drag machines to top 200 mph. 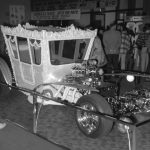 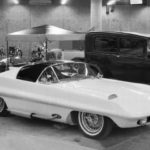 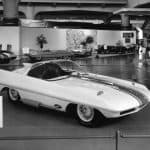 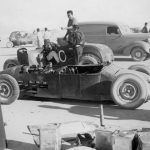 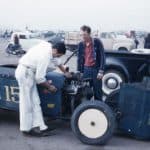 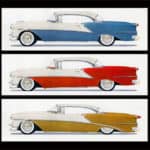 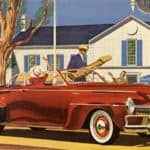 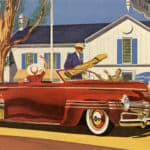 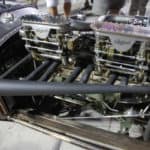 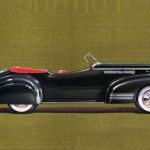 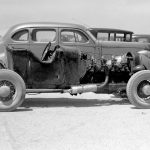 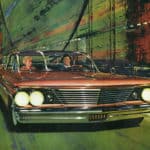 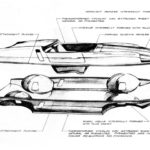 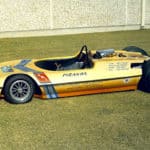