It takes a little time to recoup after three days of race cars making loud noises, especially at Bakersfield. Add to that having problems getting into the back of the website to post, it became back to work time sorting new shots taken and reflecting on the event.

Watching the cars spinning tires and popping chutes is still pretty exciting stuff after many years of observing as is watching Nitro burners light up the sky in their cackle demos, but the best part is wandering around aimlessly up and down and in an out of every nook and cranny on the Famoso grounds.

One of the highlights was running into Publisher Dave Wallace of Hot Rod Nostalgia and talking dragsters and photos. It just happened that shooter Steve Reyes was in Dave’s booth and we were talking about how he’s managed to capture so many great moments.  We learned one of his secrets and will try it out to see if it works. If successful we’ll pass it on to you.

Dave had brought up Gene Snow’s name so on Wednesday we went trolling in our archives to find a shot of the Snowman in action. It didn’t take long to find him accelerating hard and wheeling it off the line at Lions back in January 1972 shooting flames from his Dodge Charger Funnycar (JMC_142).

The shape of funnies hasn’t changed that much except for bigger crews, spending more money, being slipperier and going lots faster. We see the Mike Burkhart Camaro stripped of its body between rounds at Bakersfield on Saturday (JMC_5224).

Dragsters making noise and shooting flames is what it’s all about so here’s another shot from Lions back in ‘69 from the grandstand. There’s nothing like the old days when you could stand about 10 feet from the starting line and watch your hero’s at work (JMC_127). Better yet, we even know the starter seen in this shot with his cigar in his mouth, even today he’s still called “Weed”.

One section of the pits was occupied by the Saturday night stars of the show called “Cackle Cars”. One of the standouts was the Howard Cam’s Rattlers seen (JMC_5191). For details on this car’s rich history you could dig out your August 1969 issue of Hot Rod Magazine but it’s probably easier for you to check out—   http://cacklefest.com/Rattler.shtml   —for the car’s full history.

If we go back to the Pomona Winternationals in 1967 the fans were wowed by Willie Borsche in his Winged Express AA/Fuel Altered laying smoke screens while he one hands it for a little extra show biz pizazz (REP_070). Before this year’s cackle fest a few exhibition cars made runs down the quarter mile. One of them just happened to be the 2014 version of the Winged Express belching flames and makin smoke (JMC_5226). This one always gets the crowd’s attention.

For another form of a race car that always had the fans standing is seen in our next shot. Snapped from opposite the hot pits at Milwaukee on August 26, 1956, during practice for the Milwaukee 250 mile Champ Car Race are three head turners. On the left, we see the nose of Johnny Parson’s number 98 Agajanian Kuzma-Offy. J. P. would end up qualifying in 8th place and finishing in 11th. In the center, we see Johnny Boyd’s new Bowes Seal Fast Kurtis 500G-Offy that he put on the pole. John would finish in 5th place for entrant and chief mechanic George Bignotti. On the right is Eddie Sachs’ Ray Brady Kurtis 4000-Offy that he qualified in 24th with. Eddie would finish in a splendid 4th.

Here’s a great shot for all you guys that like Tail. Frank Kurtis put together his first Model 500G for George Bignotti’s Bowes Seal Fast team with the intent to have a roadster that would work on both dirt an asphalt. It’s seen on the trailer after arriving at Milwaukee for its second ever race, the 100 mile Rex Mays Classic held on June 10, 1956. Driver Johnny Boyd put the car on the pole and was flagged home in fifth.

You can find lots of stats on the net these days but we always like some hard stuff to refer to in the form of books. One of the best for roadsters like Boyd’s, above, is the Greg Littleton and Bill Enoch tome that covers the Roadster Era at Indianapolis. Published in 2004 this limited edition (500 copies printed) covers 27 builders and their creations that ran at the famed Brickyard between ’52 and ’66. You’ll see the car as first built and all the succeeding times they appeared at the track with pictures and captions. It’s a must for serious fans and researchers.

Last week we received an e-mail from Mike Schoss requesting pictures and info on Ermie Immerso’s ‘59 and ‘60 Bonneville Streamliner. A simple answer is as follows—

Ermie Immerso then living in Phoenix, Arizona got his hands on the old Chet Herbert “Beast IV” from ’53 and completely rebuilt it for his LSR assault on Bonneville in 1959 (LSS_015). With a new chassis and powered by two Supercharged Chrysler’s displacing around 800″ he drove the  #333 Class A Streamliner to a speed of 289.15 for a second in class behind Mickey Thompson’s 4-engined Challenger I. That’s Thompson’s ’59 Poncho push car in the background. We got the shot from our pal Lou Senter and is actually an original Polaroid hence Lou’s fingerprint and fixative smears. For ‘60 the car had a new paint job and Ford motors.

After doing B-ville stuff for awhile simple questions can turn into a real nightmare, especially in the case of cars that run for many years. The car referred to as the Immerso car isn’t really the Immerso car as it first showed at the salt in 1953 as Chet Herbert’s Beast IV. The original car was slapped together at George Barris’s shop with the help of Joco Johnson, Art Chrisman, and others. Before Ermie got it the body had been modified a few times, had multiple chassis and was run as 2WD and 4WD. After Ermie it went through even more owners and changes, ran into the ’90s and is hiding out in Colorado deciding what iteration it wants to be restored back to.

Like most of the cars that run at the salt finding construction pictures and keeping up with yearly changes drives us crazy and that’s why we’re here.

We also get inquiries all the time about some mythical database on every machine that ran at Bonneville. When we get the programs, results, and pictures to match up times 65 years and counting we’ll be glad to oblige, In the meantime, we keep plugging away at collecting info.

We run across lots of obscure goodies that fit in with the above. This book was published back in 1975 by the American Institute of Aeronautics & Astronautics on the proceedings of their second annual talks on aerodynamics for vehicles (JMC_3258). Of interest to the Bonneville Streamliner folks was a 13-page story by Dean Batchelor titled “An Historical Survey of Bonneville Record Cars”. Also inside is a 19-page story titled Some Aspects of the Design of Land Speed Record Vehicles” by Lynn Yakel that covers his Larsen & Cummins streamliner design as well as the Manning and Vesco motorcycles. This one is a must for the tech junkies out there.

The first time we were aware of Rudy Kershing Bantam bodied ride called “Beagle Beek” was in a shot taken at the Salinas Drags. This John Peschek side shot shows Rudy also visited Speedweek ’53 (PCK_029). Powered by a 248″ Chevy 6 hiding under the hood, Rudy clicked off a lap at a speed of 144.46 mph to settle for a third in class. Behind to the left is pre-war lakes racer Johnny Junkins ride

Our next shot shows a better view of Johnny Junkin’s Modified Roadster at Bonneville in ’53 by the Fuel Depot (PCK_031). The car ran in two classes that year, A and B Modified Roadster. John grabbed 1st in Class A with a speed of 135.74 mph and 4th in Class B with a speed of 137.19 mph. The car was later sold to Henry and James and run as a Track Roadster in the California Racing Association. If you go back to before WWII John dreamed up a cylinder head for the Ford 4-banger that was pretty successful. He called it a “Fargo”.

We got another e-mail during the week from Jerry Junkins from Pennsylvania (sorry he’s not related to Johnny, we asked). He had seen our post of a Roy Richter (Bell Auto Parts) built 3/4 (TQ) Midget from back in the early ’50s and said he migJJC_001) ht own the car and sent us a shot of it that appeared on the cover of Illustrated Speedway News back in March 1953 (JJC_001).

We dug out one of our other shots of the car from the Rex Burnett Collection and put an eagle eye on it (RBC_076) and the Speedway News shot. It’s a Richter built car but not the same one in our shot (different upholstery, steering, brake shock mounts, etc). Word has it that maybe three were built.

Since we always like to through you curves how about our next image (JMC_027). We see a Pit Pass from the Times Mirror Grand Prix for Sports Cars held at Riverside International Raceway in October 1961. Not the low ticket number. This event was part of the USAC Road Racing championship and the stub shows ’60 race winner Bill Krause in the Maserati of California Tipo 61 #2469. The ’61 race was won by Jack Brabham driving a Climax engined T61 Cooper. Our twist this week is the driver, Mr. Krause. Most of the info out there indicate Bill started driving sports cars is cars its cars in 1956 but the AHRF knows better. We have Bill racing TQ midgets as early as 1953 sponsored by his dad’s Machine shop (His dad, Arnold Krause and his brother were involved with Midget race cars starting in the ’30s and had a 4WD car banned because it won so much). Better yet Bill would go on to open a Honda Dealership in Inglewood in the early ’60s and become very successful with it.

A trip up to Buellton this weekend for AHRFcontributor and Lakes Racer Tim Rochlitzer’s Celebration of Life was followed up by a stop at Terry Baldwin’s. We proceeded to take in the season finale at Ventura Raceway and watch our friend “Jelly Bean” Mike Cook grab second place in the Senior Sprint Car Division Points Championship. Cool. Sunday we spent most of the day Bench racing and looking at pictures of cars before I left for home with more new old stuff to scan. Double Cool! 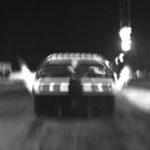 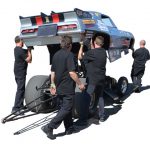 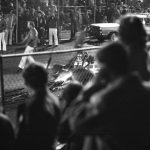 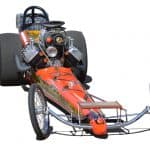 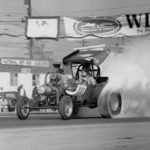 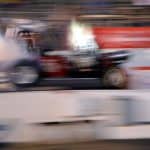 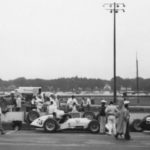 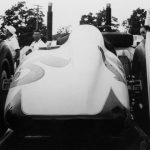 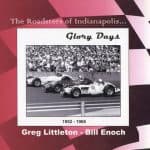 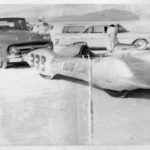 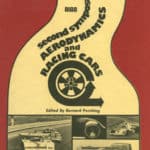 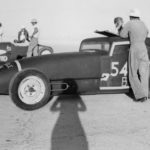 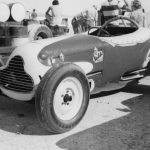 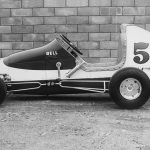 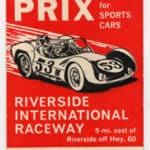