We often ask ourselves the above question. In the last seventy years, there have been thousands of rods, customs, and race cars built and they just don’t vanish off the face of the earth. We all know how much time and money each of us has invested in our daily drivers so it’s hard to imagine the over the top stuff just being sent off to the junkyard. I guess there must be a bunch of barns out there with them hiding inside.

We were scanning some more shots taken at the Grand National Roadster Show back in ‘66 and wondered if they still existed. Let’s look at a couple. First up is Sacramentoite Ronald Haworth’s mild custom (GHC_091). The ’59 Thunderbird had all its body seams molded and featured french rear taillights with handmade lenses. It featured a black diamond tuff interior with walnut paneling. Anybody have a clue if it’s still around?

When you start life as a 1956 Olds two-door hardtop you have a lot to look forward to. Gary Calvert of Salinas took his and turned it into “The Moonraker” (GHC_094). Starting up front check out those restyled headlights. Out back it was the same with the red lights. Inside was bucket seats front and rear accented with a phone, TV, tape recorder and a bar. All state of the art stuff in the day. Grab your sunglasses because it was painted candy pearl red. We’re thinking this would be a great ride to take to the malt shop this weekend. Wonder if Gary is still around to ask what happened to it.

For our next act and a change of venue, here’s what you could call an early custom that was snapped at the lakes (HEY_010). It’s Tommy Lee’s car at Muroc in 1940 minus its fenders. The Offy powered car showed up three times that year with a best speed of 135.95 mph at the October 6th meet.

To show the car off a little better we found this shot of racer Babe Stapp with the car at the Oakland Speedway in 1940 standing next to it in the infield (CKC_1452). Do you think he’s offering us a chance to drive it? Probably not. The great thing about this one iis that it still exists and was spied at the GNRS in Pomona a couple of years ago. And yes it would look good at the malt shop with a tray hanging on the door.

We’re being a little sneaky this week using the above two shots to set-up up for what happened today (Sunday) in a town called Speedway, Indiana. Since Babe Stapp was shot with the Lee car above we thought it would be cool to show him behind the wheel of his work vehicle back in 1936 (CKC_720). Babe and his riding mechanic Johnny Apple pose proudly in the seat of Gil Pirrung racer after qualifying for the ‘36 500. The Wilbur Shaw conceived light blue car had a 255″ Offy for power and got the boys into the race with a speed of 118.942 mph to started in the middle of the front row. Bad luck struck after completing 89 laps when the crank broke. This wasn’t as bad as their team car which had a little altercation with the wall in practice. Driver Tony Gulotta walked away but the car was trashed. As a side note what was left of Gulotta’s wreck was the basiis for Joel Thorne’s Art Sparks built Land Speed Car that would eventually be sold to bus manufacturer Lou Fageol and would appear again at Indy as a Sports Car.

A former Motorcycle racer and dealer by the name of Floyd Clymer turned to publishing right after the end of WWII. We’ve gathered up eight of his soft-cover books that are a treasure trove of information on the Greatest Spectacle in Racing for you to look at (JMC_4782). During those eight years covering 1946 to 1953 seven drivers got their faces added to the Borg-Warner Trophy for winning the race. Their names were George Robson in ‘46, Mauri Rose in ‘47 and ‘48, Bill Holland in ‘49, Johnny Parsons in ‘50, Lee Wallard in ‘51, Troy Ruttman in ‘52 and Bill Vukovich in 1953.

To get to the top of the game the above drivers had to start at the bottom and work their way up. This usually ment spending years on dirt bullrings honing their craft. We did a little digging in our archives and found some shots of each in non-Speedway cars. Hope you enjoy them.

JMC_3088 shows two-time 500 winner Mauri Rose at Oakland before WWII. Note how small he was in what was called a Big Car in the day.

CKC_1348 shows Bill Holland in the midwest. He ran everywhere, sometimes as a member of the AAA and sometimes as an Outlaw. He was one fine driver.

CKC_889 shows Lee Wallard in this Frank Smith shot taken at Longhorne in the Speedway Cocktail Special. There must be something to that old saying that all good drivers and their race cars run on Alcohol.

BHC_284 shows a young Bill Vukovich behind the wheel posing with Gib Lilly most likely at Sportland Park’s 1/4 mile dirt oval at Bakersfield in 1942. The car was powered by a Drake (basically a water-cooled Harley motorcycle engine). Fred Gerhardt and Bill’s brother Mike built the car for the 1937 season. The tough and tumble car would become known as “Old Ironsides”.

For a closer we see Ryan Hunter-Reay’s Andretti Motorsports car at Long Beach on April 10, 2014, after completing the inspection process. Ryan qualified the car on pole position and was in contention for the win until lap 55 when four cars tangled and he was eliminated from the race. He was classified as finishing in 20th place. Earlier today he went out and won the 2014 Indianapolis 500 and did a great job of keeping us glued to our seats for the last seven laps of the race. 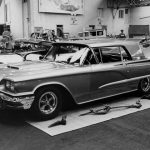 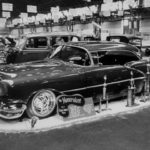 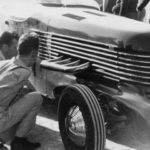 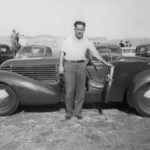 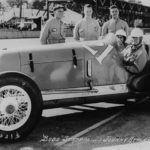 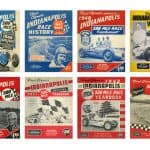 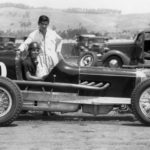 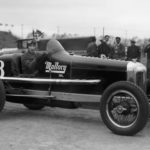 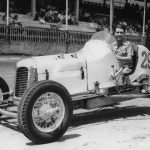 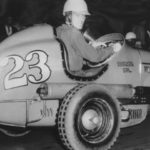 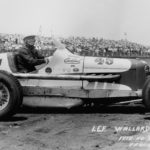 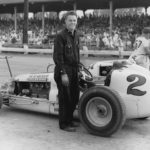 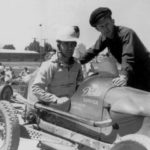 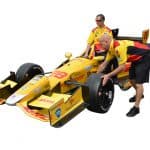