Since we’re about to leave one year and enter the next I thought it might be cool to show you a little old and new on a similar subject matter. It makes our life easier this week since Christmas fell right in the middle of the week and got a little in the way of getting things done. That’s not saying we didn’t as we got a bunch of our in the queue negs scanned. The tough part is that of late most of the cool rides we’ve scanned are unknown to us even though we know the location and plus or couple of ideas on how to solve the problem so stay tuned.

First up for today is a classic shot of a ’34 chop topper from our pal Jack Underwood that shows the Belond Equa Flow Exhaust Special at Bonneville in 1953 (JUC_145). It was powered by a 302″ GMC inline 6 and ran in Class C Competition Coupe. The front of the car was yellow and the cab was in the maroon family. It finished third in class with a speed of 158.17 mph behind the Fox-Cobb and Chrisman Brothers entries.

The lakes have always been known forever as the bring-er-out-er of off the wall creations and the Blake Machine 36T Buick fills the bill to a T (JMC_5381). Bryan Blake brought his newly built Class XO Gas Competition Coupe over from Phoenix for a little tune-up and can it get through inspection the first time. When the meet was over he and his team went home with some runs under their belt and a lap of 145.605 mph on the existing record of 160. mph. The nose reminds us of the Belond car above so and you can see where 60 years has gotten us, front wheel pants.

From the Mario Baffico Collection, we see Robert Schmitt of Chalmers, Indiana who showed up at Bonneville in 1955 with this twin Harley-Davidson powered motorcycle appropriately named the Monster (MBB_171). The frame was built by mating two Harley 61’s and installing two 80 cubic inch engines. The machine was timed at 157.20 mph and was the fourth fastest of 25 bikes entered that year.

Shaun Bvardado was a guest entry at the last S.C.T.A. race of the 2014 seasy-Davidson powered motorcycle appropriately named the Monster (MBB_171). The frame was built by mating two  61’s and installing two 80 ci engines. The machine was timed at 157.20 mph and was the fourth fastest of 25 bikes entered that year.

Shaun Bvardado was a guest entry at the last S.C.T.A. race of the 2014 seas season at El Mirage in November 2014. His bike was entered as SMC066. The S stood for Suicide, the M for Machine and the C Company. We’re lost on the rest. The ride was entered in A-PBG and ran a 1350cc mill. The record stood at 167 mph and Shaun cut a lap at 115.973 mph, not bad for first time out. He’s seen checking the cylinder head temp as he wings it about six vehicles back from his second ride. It’s got a hardtail like the Monster and by the time Shaun’s finished with her the bike will be faster than it’s twin-engined predecessor, we hope.

Don Ferrara took this shot of his hot rod posed on the street with his high school (on the right)(DFC_008). It shows us the state of the art in street roadsters when it was snapped back on March 5, 1944. The car would go on to be on the cover of quite a few enthusiast publications like the August 1951 issue of Hot Rod Magazine. Note the “A” gas ration sticker on the windshield. Don was a member of the Russetta Timing Association and rann ration sticker on the windshield the car at the lakes. On May 29, 1949, his 248″ 21 stud flattie with Cyclone heads, Navarro intake, Winfield cam, and Kong ignition got him a speed of 116.58 mph.

State of the art these days is how low can you build your rod (JMC_5382). Erik Hannsson is being pushed to the starting line at El Mirage on November 8, 2014, in his ground-hugging Class V4 Blown Gas Roadster. He took the car out for a shakedown run on the 180 mph record. The next day his wife Ruth, driving the push truck in this shot, had her turn at the wheel and took the car to impound after running 194.161 mph. A few minutes later our pal Dan Warner completed certification on the legality on the car and they left with a new record. When Erik drove, the car had dusted out due to the slick windshield creating a vacuum in the driver’s compartment. It was removed on Ruth’s run and the problem was solved. Note how aero the front end is with a straight axle and the shocks tucked inside.

Next up is a Joseph Barnett shot showing the D’Amato-Quinn-Wiegell Class C Coupe and Sedan at Bonneville in 1953 (BAR_173). The chopped top Deuce was powered by a 300″ ‘41 Merc flathead with most likely Offenhauser go fast parts attached. The car ran 145.16 mph for a first in class against the record of 162.459 mph set by the C.T. Automotive car in ’51. The X’s taped on the windows were there in case the glass broke.

To show you how un-far the evolution of a classic looking street rod has come in 60 years check out our next new shot (JMC_5383). The Petersen Automobile Museum held an event called Deuce Day back in March 2012 to celebrate 80 years from the date of birth of the most hot rodded vehicle on the planet, the 1932 Ford. This pix was taken on the roof of the museum. The car, except for a few small details is almost a dead ringer of the orange B-ville ride above.

Last week I mentioned a couple of phone calls about some photo researching. Well here’s a little insight into what we were up to. Two old cars from the past have been unearthed and their respective ownners were trying to figure out a little of their histories. We just happened to have shots of each in our archives so here they are.

Not all roadsters were of the Ford flathead V8 powered persuasion. This jewel from our Mario Baffico Collection was owned by Bob Wright and run with fellow Pasadena Roadster Club member Don Berg (MBB_047). Power was powered by a ’34 Cadillac flathead V8 displacing 366″. The giveaway is that exhausts came out of the top of the block and out the hood. They ran the car at the lakes in ’49 as a Class D Roadster number 395 and were timed at 112 mph in May of that year. Don Berg’s name can still be found on cars running at the Lakes and Bonneville in the guise of the yellow BMR Deuces, a roadster, and a coupe.  The B stands for Don Berg whose not with us anymore, the M for Alan McAlister and the R for Doug Robinson. And yes these cars are really fast.

Tim Rochlitzer shot this great looking ’29 Ford roadster from inside his pickup at Bonneville in 1951. Until now, all we knew about the car was that it was from San Francisco and belonged to a spectator. After our phone conversations, we discovered the car is still in existence and was built by a Mr. Dick King. Note the K in the nerf bar. It was removed from the bar by one of the car’s subsequent owners when the car was updated and a Chevy installed in place of a flat motor. Hopefully, it will be returned to its original state.

Since we get to say goodbye to last year and hello to 2015 we’d also like to say thanks to all of you for visiting the site. Without you, we couldn’t have come as far as we have in saving our rodding history.

Al the best to you and yours in the coming year from all of us at the American Hot Rod Foundation. 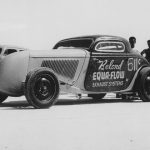 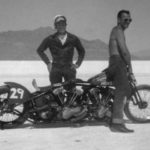 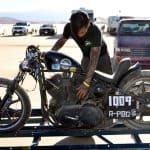 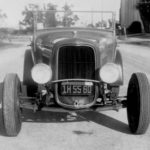 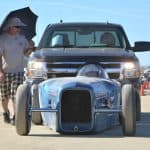 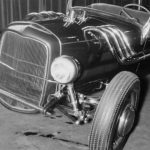 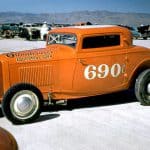 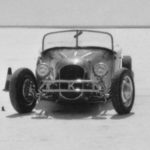