Once a month we grab a bunch of different shots from our archives and prep them for the Photo of the Day section on the site. Lots of what gets picked are shots that we haven’t identified or captioned yet and this process takes a good couple of days so you can guess what we did early this week.

For our next act let’s look at Glen Freudenberger’s shot of J. D. Tone’s 1940 Chevrolet that appeared in the December 1975 issue of Street Rodder and the 1976 S.C.T.A. Rulebook (SCT_179). We see the car on a tear at Speedweek in 1975. It was powered by a 292″ GMC and established a new Vintage Altered Coupe and Sedan record of 106.852 mph. We still see J.D. once and awhile with his GMC powered Roadster and “Freud”, as he’s called, is part of Marlo Treit’s Target 550 Streamliner crew.

Last up of the S.C.T.A. shots this week is Glen Carter from Rowland Heights, California who showed up at Bonneville in ’74 with this Camaro called Carter’s Mistress (SCT_186). In the Program the car was entered in three Production Coupe and Sedan classes, D running car number 166, E running car number 1662 and F running number 1666. If you check out this Frank Odo shot from the ’75 Rulebook that was shot in ’74 you will see that it also ran in Class H Gas Coupe and Sedan. Starter Bob Higbee is giving last-minute instructions to Glen before he has a go at the class’s open record. We can’t find any info on the car’s speed in this class and the rulebook indicates that the record was still open in ’75. Does this mean Glen didn’t record a speed on the run? Or maybe he couldn’t two-way. It’s another Bonneville mystery that we have to solve.

A few weeks back we showed you some shots Terry Baldwin had taken at the Antique Nationals four decades ago. Here’s another one of those faded transparencies taken at the Nationals in May 1974 when it was held at the old Irwindale Drag Strip (TBC_138). Looks like an old lakes tank will soon be making a few runs down the track. To bad the owner of the slick ride is unknown.

One of Terry’s faded shots we showed you before was TBC_114. While rustling through some old track shots this week we ran across a picture of the very same car taken back in the day. Interestingly it was wearing the same paint and number in this late ‘40’s shot (JMC_5305). We’ve identified the driver as Bob Garrett.

Since most older racing shots were taken in black and white we feel kinda robbed because we don’t know what color(s) they were originally painted. Sometimes we luck out in our research and run across info on the car’s color in an old story. Back in mid-1923 for instance, we know that Cliff Durant had ordered a bunch of new Miller race cars for his team and got them by Thanksgiving. We also know the cars were yellow with red numbers outlined in black and the rails and rims were also black. Just visualize this beauty seen here with Durant team leader Jimmy Murphy in living color (CKC_556). What a beauty.

The top of our next image (JMC_5306) shows the side view of a 91″ Miller Racing Car from an original Harry Miller Catalog printed back in early 1926. This particular car was the one later raced in the Indianapolis 500 mile race in May that was driven by Bennett Hill. Hill started in 7th after qualifying at a speed of 105.876 mph and came 12th. The car’s price new was $10,000.00 Plus Tax. Wow! With a little computer magic, we’ve created the bottom image that shows what the car looked like in color when it was photographed way back when, Maroon, red and white. It wore the number 16 in the 500 that was painted in white to match the top of the car.

Last week we visited the Pomona track so here are a couple more shots showing some of G.M.’s finest. First up (JMC_5256) and up front, we find the early Vette of Jimmy Lewis from far off Forney, Texas. The Wood Racing/Sunset Performance ride was powered by a 582″ Suns. On the left is Steve Williams Stingray from Beaumont, California entered as the K&N Filters ride. It had a 565″ Chevy under the hood. The black ’03 Vette on the right was driven by Jason Kenny from Kutztown, Pennsylvania and was sponsored by Jegs and K&N.. It was powered by a 555″ Stin. Jimmy wouldn’t make the show, Steve sneaked in at 32nd and Jason was 6th after the first round. In Round 2 it was by,ek.

Next up is this shot from the 1990 Bonneville Program showing the number 44 Class AA Fuel Modified Roadster of Dannenfelzer & Richards (SCT_103). Owned by Fast Freddy D. out of Santa Barbara, it was powered by a 477″ Donovan Chrysler. Bob Richards was the crew chief and he, Paul Madsen and Fred really make Hemi’s sing. The class record stood at 291.897 mph and Fred cut two laps during the week, one at 290.359 mph and the other at 287.910 mph. Close but no cigar as they say. The shot was by Steve while Jason advanced. In Round 3 Jason advanced again and ditto for round 4. In round 5, the next to last, Jason lost with a 9.966 to Trevor Larson’s 9.903. Adios.

Mike Lang from Northridge, CA runs this super cool looking Corvette in the Super Gas Class (JMC_5307). He’s captured in staging on Thursday morning vying for one of the 36 starting positions of the 80 cars entered in the class. He didn’t make the cut.

Since the old Vette’s look just right we just had to share with you this just found flyer of a C2 printed in late ‘55 for the ‘56 model year. The outside is JMC_5297 and the inside is JMC_5298. Enjoy! 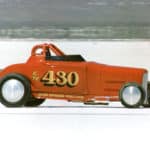 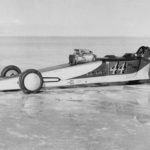 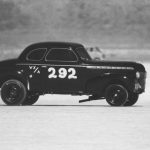 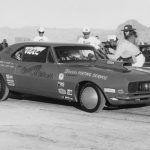 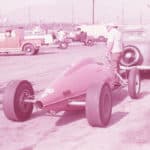 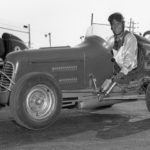 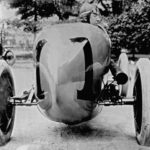 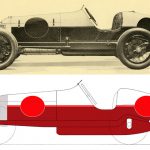 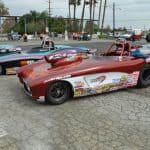 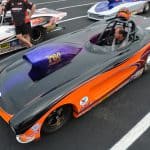 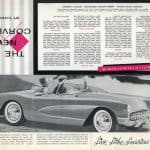 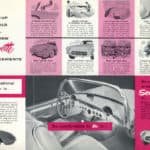 Previous Post: « A Mix of Old and New
Next Post: New Twists on Old Stuff »
↑ Top of Page