Tracking the lives of race cars is sometimes easy and sometimes a real bear depending on how famous the car was or who drove it. Take for example the So-Cal Streamliner. We know the car was originally a belly-tank lakester that Alex and Dean ran. They modified the car for the ‘49 lakes season by scrapping the original body and having Valley Custom build them an all aluminum envelope body. Dean Batchelor then flipped the car without to much damage to himself. A little homework revealed that the front end disintegrated lift that helped the car get out of shape. They went back to Valley Custom and had them do a new longer nose for the car in 1950. After turning the world on its ear with the speed the car attained at Bonneville Alex and Dean were talked into taking the car to Daytona Beach and set some International Records. On February 8, 1951, the car made like an aircraft and took off at over 150 mph. Driver Bill Daily luckily survived the flight.

This is a simple version. Every car has many sub lives that go on between runs. Take for example our first shot for today (GGC_018) courtesy of the Gear Grinders Car Club Collection. We see the boy’s Class A Streamliner on the trailer at El Mirage most likely in September 1949. The Sidewinder member’s toy was powered by a 156″  ’39 V8-60 with Edelbrock heads and intake, Winfield cam and Kong ignition. The car wasn’t finished for the May meet. In June Dean Batchelor set a two-way record of 136.67 mph after running a fast 142.40 one way. For July they set another record at 138.74 mph with a one way of 141.50 mph. They went up to B-ville with it in August and ran 155.17 in Class A liner, switched engines and ran 187.89 mph in Class C. They got serious and ran a lap at 193.54 mph and set a 189.754 mph record. Back at the lakes in September they ran in Class C and ran 178.92 mph and again set a record at 174.33 mph. In October they were back and bumped the record again to 179.82 mph. You may ask what about the damage to the front of the car? That’s easy. Alex said when he was backing up the trailer got a little bit out of shape and the bumper proceeded to massage the liner’s front bodywork. The car on the trailer behind the Merc in the background is the Class B Lakester of fellow Sidewinders Wes Cooper and Bob Hayes. It was bright Orange and was powered by a Model B banger with a Fargo head.

To continue the story, this week we were scanning a bunch of old newspaper clippings from the late ‘40 and early ‘50 courtesy of Chet Knox. Amongst them, we ran across the attached (CKC_2286) that was from the Glendale News-Press that we have dated from February 9, 1951. It gives us more incite to Daily accident at Daytona.

Next up is a shot taken at Culver City Speedway back in 1947 courtesy of Louis Senter that shows Ed Haddad in John Balch’s famous Offy powered Kopper Kart sponsored Kurtis (LSS_259). That year Ed won races at Gilmore in the car on August 28, September 11th and 25th and October 16th. We have Haddad racing as far back as Legion Ascot and Oakland in the mid-thirties before he took up driving the Mighty Midgets. It’s also a segway to our next image that’s also a just scanned newspaper clipping.

CKC_2304 is a clipping from an unidentified Los Angeles newspaper that was published right after the death of Rex Mays at Del Mar on November 6, 1949, showing 20 drivers that met their death in auto races in the last half of 1949. That year was particularly bad in the fatality department and as usual, the papers were drumming up support to ban auto racing, again. Note that Ed Haddad had perished a scant two weeks before Mays.

While on the departed list our pal Joe Henning called on Friday to tell us that George Barris had just passed away. Joe and George go way back and this is Joe’s take on George’s Aircar that appeared in the May 1961 issue of Rod & Custom Magazine (JHC_1473).

Volumes could be and have been written on George, a truly American Icon. He will be missed by all who ever saw one of his creations. We dug out this shot for you of a cool ride George built for Jim Seaton (LAP_243). The car was featured in the July ’59 issue of Custom Cars, the October ’59 issue of Car Craft and the ’61 Trend Book Custom Car Annual. It’s seen making tracks at the Santa Maria Drag Strip that Mr. Seaton managed in the late ’50s.

Back in March 2010, we took a little road trip back to Texas to catch up with buddy, and fellow Bonneville racer, Ed Stuck. Being the Lone Star State host he is, it wasn’t long before we were off to visit just a few race and rod shops in the Dallas area. One of the stops was at Brian Bass’ Custom and Hot Rod emporium. Everywhere you looked in his shop there were cool rides in the build process. One that grabbed our attention was the tail of a Deuce Roadster sporting Buick tail lights in the mock-up stages seen in this shot (JMC_5749). Who would of guessed five years later we would run into the finished car and Brian on the beach at The Race of Gentlemen. It really is a small car world.

Could it be that these two Cowboys are trying to psych each other out before a possible matchup on the sand at The Race of Gentlemen in 2015? Brian Bass out of Dallas, Texas in his Candy Apple Red Deuce powered by a 330″ flattie and Scott McCann out of Westminister, Colorado in his old Bonneville racer powered by a 239″ flattie is seen just before heading to staging. They didn’t get to face each other in the eliminations and both made it to round two of the finals before being out dragged on the shifting sands of Wildwood Beach, New Jersey. Bummer, it would have been a great shootout to see who drew the fastest.

Since Brian’s red is such a good color let’s stick with the tone and check out some other red rides at El Mirage. Zoom Zoom Racing ran this slippery red Class F Blown Gas Lakester at the September 13, 2015, S.C.T.A. lakes meet (JMC_5746). Driver Donnie Hicks, a Rod Riders member, had some problems chasing the 208.541 mph record and had to turn out before clicking the lights. He didn’t receive a speed by got 25 points for his efforts.

Driver Brad Bosworth has just climbed into the red Valley Fever Class H Blown Fuel Streamliner at El Mirage (JMC_5747). Pete on the left holding the umbrella and Keith on the right make sure he’s secure before the lid is secured and he took off. The record stood at 247.750 mph and gets to hang around some more as troubles forced Brad to coast through the lights at a slow 118.817 mph.

The Ardun-Chevy that powered the Ferguson Racing number 75 Class B Fuel Streamliner at El Mirage on September 13, 2015, isn’t red but the MSD Mag’s and the car is (JMC_5745). Rod Riders club member Don Ferguson III drove the Paramount Forge sponsored car to a new record of 262.020 mph, upping the old record of 246.026 mph. Does it also count the crew was all wearing new red T-shirts?

A week or so back we got serious about scanning a bunch of Henning negatives that had been through a bunch of wars including dust and water damage. We finished up about 50 of them this week. Let’s have a look at a couple. First up is Dickie Ferguson who won at Tulare on August 2, Modesto on August 15 and Fresno on August 24, 1947 (JHC_1461). He’s seen in the Armstrong/Van Tassel number 83 Madison Inn Special Kurtis that was powered by a Ford V8-60. The grandstands and crash wall says this shot was taken at Fresno. The obscured number 98 on the Kittinger/Redding Kurtis in the background was sponsored by Art Hall Lincoln-Mercury out of Los Angeles and driven by one “Joltin” Johnny Mantz.

The last picture is rare indeed as you don’t usually see this driver smiling (JHC_1451). After winning the URA Red Circuit Championship in ’45 and ’46, and finishing second in ’47 in his famous Drake powered midget called “Old Ironsides”, our subject in this 1948 shot is seen receiving a trophy for winning yet another race on his way to a third place in the 1948 URA Championship. The ride is his almost new Kurtis that was shortened a tad, had the cowl massaged and also ran a Drake. As for the date of this shot, it could be May 7th or June 9th at Bakersfield, May 9th, July 18, August 8th or October 24th at Fresno, May 15th, June 12th, June 19, July 10th or August 21 at Tulare. Take your pick. Our hero driver was born on December 13, 1918, in Oakland, California and given the name Vaso. This was soon changed to Bill as in Vukovich. Did we mention he also won 15 other midget races in ’48 behind the wheel of the Fred Gerhardt, Mike Casale, and the Kittinger/Stroppe cars? 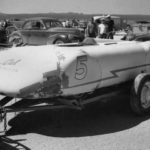 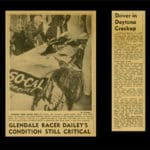 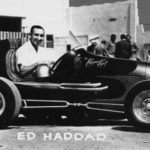 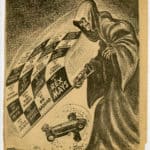 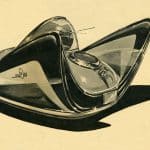 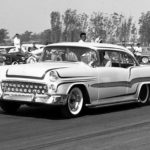 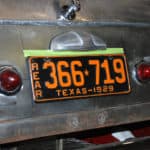 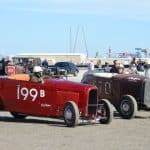 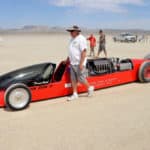 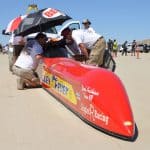 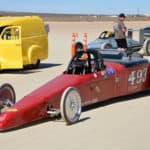 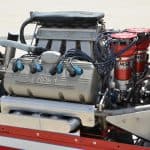 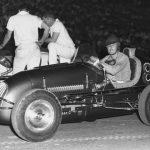 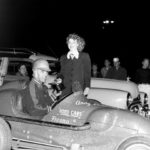 Previous Post: « We went to the Space Port
Next Post: From a Spaceport to a Meow »
↑ Top of Page