Let’s start with last weekend and the trip to Johnny Carson Park for the Road Kings Car Show. We showed you some snaps we took while walking around that were mostly street drivable. One we didn’t show you took part in a little Cackle Fest and was burning its fair share of a thing called Nitro. We’re showing this (JMC_4788) to you to get you into the outdoor cool car mode.

For our next act take a gander at GHC_186 of a ride we don’t know anything about. We scanned a few of these type shots early in the week and If we’re lucky it might start to transport you back to a simpler but exciting time.

Wednesday morning we got up at oh-too-dark-thirty and headed for the airport instead of plunking oneself in front of the computer. We were off to do a little Bowling! At around five thirty in the afternoon, our transport finally landed in Nashville, Tennessee after a transfer in Las Vegas and sitting an hour and a half on the tarmac while a fuel pump was changed. Twenty-something travelers were then booted off the plane to meet some unknown FAA rule that went with the fix before we could lift-off.

There was some big Country Music dealio happening in music city (Nashville) that complicated our getting a rental car and escaping town. After more than a little panic, we finally ended up with under-powered 4-banger powered front-wheel-drive car and headed North to our Bowling destination in Kentucky.

All was not smooth sailing as one had to listen to windshield wipers slapping time (a music joke) thanks to some nasty rain for most of the way. The downpour finally stopped and the rest of the ride went smoothly. By the way, did I mention that the Bowling destination referred to earlier was actually the 12th Annual N.H.R.A. Holly National Hot Rod Reunion being held in Bowling Green?

The next morning it was head for Beach Bend Raceway Park (about 15 minutes from the hotel) to set up our AHRF booth so we can spread the word on what we’re doing to save our beloved history. After the setup, it was sneak away time to check out all the cool rides and shoot a few pictures for you. Here’s one of the first images captured on the reconnaissance mission (JMC_4987). You’re looking at a 1946-1947 Nash two-door sedan that was turned into a gasser ages ago and managed to survive. We love the tacky paint job from yesteryear.

It was hot-foot it back to the booth time. When I arrived the place was a madhouse of interested folks so el camera captured another shot for you (JMC_5000).

After hanging around the booth for awhile it was time to do some serious snooping so here we go. Over in the area for cackle cars, we spotted the Lynwood Welding Special fitted with an iron block Hemi (JMC_4999). Talk about a time warp.

Our next shot victim is this wild looking B Gas Comp called the “Silver Bullet” that is trying to decide if it’s a roadster or a coupe (JMC_4989). In the meantime, it ran at U.S. 30 Dragstrip in Hobart, Indiana and cut a lap of 142.85 mph in 10.37 seconds to receive a Doris Herbert signed 1320 Certificate back in August 1966. The Johnson Brothers & Friedhopper Dodge powered ride hailed from Brookfield, Wisconsin back in the day.

There was also some modern stuff at the event. This down shot shows the wildly painted nose of George Reidnaner’s 1978 Vett Nostalgia Funnycar that was called Excalibur (JMC_5002). The car came all the way from Connecticut to participate in the 2014 Bowling Green Hot Rod Reunion.

Out in the north 40 we ran across this altered wheelbase ‘64 Rambler 440 (JMC_4990). The A/FX runner looks mean and nasty just standing still.

On the opposite end of the fit and finish spectrum to the Rambler is this through the wheel well shot of a ‘55 Chevy called Orange Krate (JMC_5006). We bet the dual-quads get real thirsty when the driver stomps on the loud pedal.

We cruised over to where cars were waiting to run and found almost every make and model that the Big 3 had produced (JMC_4991). We dig the slightly altered saying on the decklid of the ‘63 Plymouth Fury in the foreground.

Hot rods were also well in attendance. We saw it first cruising the grounds and then parked on a rise where we just had to shoot it. Do we dare call this well proportioned Model Aa Roadster-Pickup (JMC_5010)? The wheel-discs look exactly like the ones Jim Lattin had spun for his Hilborn Lakester-Liner re-pop. Cool.

Another Roadster that really turned our head was the Edwards Rod Shop A out of Lincoln, Illinois (JMC_4996). Our guess is the wing isn’t doing a good job of generating downforce for traction at zero miles an hour.

Tom May and his wife out of Midland, Michigan showed up in Bowling Green this year with his more than slick looking Deuce 3-window (JMC_5005). What’s even cooler is that we finally got to meet him face to face after all these years. You ask why? Tom’s car was used as the poster child for the American Hot Rod Foundation Logo that was created for us over a decade ago. He’s a great guy, too!

Next up is a coupe that is definitely an E-Ticket ride (JMC_4994). Hell Za Pop’n hails from Hog Mountain, Georgia and has been known to be pretty good at pulling wheelies. We snapped her about five minutes before a blast down Beech Bend Raceway.

Bet you never have to worry about being a little thirsty when the Rocky Top MoonShine ‘46 Ford Super Deluxe is in the neighborhood (JMC_5008). This was one of the cars that was never in the same spot twice during the show so maybe there is something special in the trunk.

There were quite a few Model A two-door Sedans spotted in the Beach Bend parking area and this one begged to be snapped (JMC_4988). The wide whites, blower and proportions remind one of a Hot Wheels. The only problem now is having a desk large enough to put it on.

Another take for a Hot Wheels sedan is seen in our next shot (JMC_5011). It sounded really nasty as it cruised and was spotted in town later that night where impromptu burnouts in front of the hotel were all the rage.

As I was heading back to the AHRF booth this shaved ‘49 Cad stopped me dead in my tracks as it eased on down the road (JMC_5010). Harley Earl’s design team at GM should be applauded for this classic.

Yet another head turner got in the way of returning to the booth asap. This time it was the paint job on Brenda McDaniel’s ’48 Chevy Pickup that did it (JMC_5009). They both hail from Beaver Creek, Kentucky.

There were literally hundreds of cars that knocked one’s socks off at Bowling Green. Taking pictures of them was easy, it’s the figuring out who the owners are and getting some good info on them that’s going to drive us crazy. Maybe that’s the perfect excuse we need to go back next year. 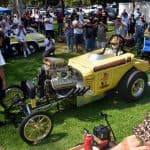 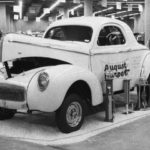 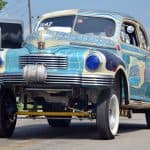 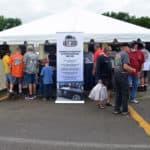 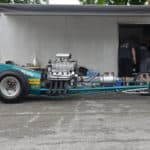 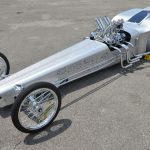 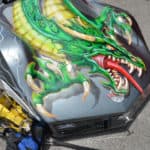 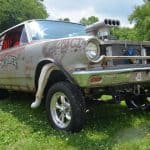 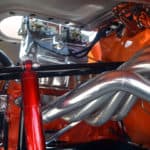 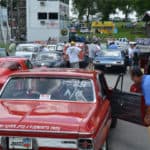 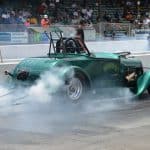 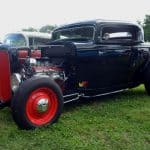 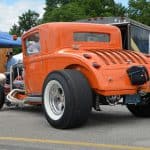 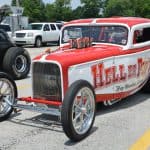 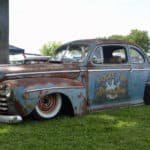 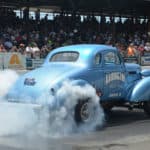 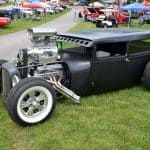 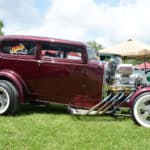 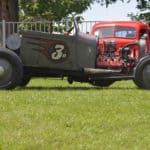 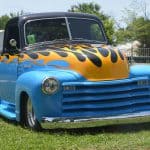