For the last couple of weeks, we have been scanning some negs and prints that were taken at the 1966 Grand National Roadster Show. We got them from our Bonneville racing buddy Gary Hartsock who lives up in the Bay Area.

Normally when you go to a car show and take your camera you usually shoot just the cars that ring your bell. In this case, the shooter went down every aisle in the show and tried to get every car. We’ve pulled up a program from the event lent to us for scanning by Roy Brizio and we’ve matched up some of the shots to descriptions in the program. This info plus what we can see on display boards in the shots almost makes us experts. We’ve also run across a few names of people we know like Steve Moal and Dennis Varni that are players in that world and also friends. We call that way cool.

We’ve also run across some shots of nice looking rides that weren’t listed in the program so our work isn’t over with yet. Let’s have a look at a couple that we’ve figured out.

First up is Keith Bush’s fantastic looking ’32 Ford two-door sedan (GHC_168). Underneath the tastily striped body lurked a ’54 Cad hooked to a ’39 Ford tranny fitted with Zephyr gears. You need sunglasses to look at the running gear as it’s all chrome. We often ask ourselves are these cars still around and how many rebuilds have they survived.

One thing you don’t run into these days at car shows is boats. You use to see them all the time but it’s rare these days. That gives us a good reason to show you Jim Burtenson’s slick looking Ski Boat from Vallejo at the ’66 show. The hull was an 18 foot Howard that featured a modified deck sporting black walnut. It was sprayed silver metalflake and trimmed with poppy red. The mode of “Go” out back through the v-drive was a 409″ Ford.

During the week we received another envelope from our Right Coast friend Jere Sheehan. Inside was a copy of a story from the New York Times written by Richard J. H. Johnson and published back on September 14, 1956. As a fan of Drag Racing, you might find it interesting.

“CHICAGO, September 13 — Police-supervised “drag” racing was assailed today by the sixty-third annual conference of the International Association of Chiefs of Police”

“A resolution calling on police forces to outlay “drag strips,” on which teen-age drivers stage speed contests, was adopted at the closing session.”

“A number of police departments in the country have encouraged and supervised “drag” racing on deserted streets. The resolution condemned the practice as no substitute for the teaching of safe driving practices”

“The element of competition encouraged by racing, the resolution declared, is inconsistent with the basic fact of good driving — cooperation.”

“The resolution pointed out that city and police officials had set up a “drag” racing strip onory that supervised competition would reduce speeding and dangerous driving practices among “hot rod” enthusiasts. But these officials, it said, are defeating their own purposes.”

“Asks Better Use of Use of the theory that supervised competition would reduce speeding and dangerous driving practices among “hot rod” enthusiasts. But these officials, it said, are defeating their own purposes.”

“Asks Better Use of Money”

“It was argued that if time, money and effort expended in supervised “drag” competition were applied to driver training among the young, a sounder approach to the problem of speeding and reckless driving would be assured.”

“The resolution said the operation of a motor vehicle on crowded highways “does not permit the driver to entertain the belief that he must compete with his fellow driver.”

“The resolution was offered by a committee headed by B. R. Caldwell, chief of the California Highway Patrol.”

“It is recommended that law enforcement agencies refrain from setting up so-called legal “drag strips” or encouraging competitive activities among young drivers.”

“The committee declared that speed was the leading contributing cause of major accidents and that “drag” racing placed prime emphasis on speed. Drag races compete from a standing start to maximum acceleration within a given distance.”

“The group’s resolution declared that this tended to inspire participants to   the practice to the public streets.”

Lots of mumbo jumbo above that I bet never stopped anybody at a stop-sign/light from having a little fun. It’s also a good lead-in to almost the exact same thing that happened in Los Angeles before the ‘50’s even existed. The first Los Angeles Times clipping from the collection of Mr. Hot Rod himself, “Pete” Petersen, touches on the subject (REP_007). Our next clipping (REP_010) went as far as saying that rodders found themselves “Cussed and Discussed”.

We’re still trying to figure out how many “rods” were floating around in Los Angeles before and after WWII. L.A.’s population was around 3 Million in 1940 and 4 Million on in ‘50. It was quoted that 10,000 went to one pre-war lakes meet at Muroc and 85,000 went to a Midget car race held at the Coliseum. That adds up to huge numbers of racing fans and one could wager that most had tried a stoplight acceleration contest on the public streets.

That brings us to a clipping from the Bob Wenz Collection that talks about some “street races” that took place in West L.A. a few miles away from where I grew up (RWC_165). Some of the AHRF’s older friends were there that night and still relate their versions of the bust and how they escaped being caught.

Driving about 15 miles North through the Sepulveda pass and past the flood basin in the San Fernando Valley brought one to a nice mostly deserted straight road that is described in our next clipping (RWC_174). If one were around 16 or 17 instead of four at the time what’s the chance that the black rubber strips on the pavement wouldn’t have been mine.

It was perfect weather on Friday night and having a lemonade sounded good, so a 10-minute ride to Bob’s Big Boy did the trick. We usually run into friends there and the night didn’t disappoint. Longtime rodders and lakes racers Harold Johansen and Johnny Wolf both showed so we got to talk a bit. There is an eclectic mix of rides that usually show and sometimes one is as they say really outrageous like our next shot (JMC_4795). You could call it a Fiat Topolino or a Simca but we call it wild. The plate on the back said NOCHUTE and it even had wheelie bars. There was room for two inside and the rump-rump of the engine said it should have been at Lions instead of the drive-In. An LAPD hat hanging on the passenger headrest facing the rear might possibly avert a ticket or two. It looked brand new and will probably be seen at next weekend’s L.A. Roadster Show.

This morning I was sitting at the computer prepping so stuff for this issue of the news and got a call from Dick Martin who you might know through his Rod & Custom stories. He was at Johnny Carson Park for the Road Kings Car Show and asked where was I. Fifteen minutes later guess where I was. With a fresh battery and an empty disk in the camera, my index finger was kept busy.

The tail of this Gary Fioto built Chopit Kustom ‘49-’51Merc is almost unrecognizable after it was fitted with the ends of a ‘60 Cad rear bumper (JMC_4790. It great the way the monster skirts follow the original body lines. The super-lowered lid kind of fools you in the no-room for your head inside department until you realize it has a second tier that solves that problem. Nice job Gary. And yes, the front is just as wild. The Chevy on the left sports 1956 Packard Clipper taillights. Best of all, both were driven to the show.

Cars came and went all morning and this Track-T was one of them. It’s definitely a Wow! (JMC_4791). Love the edging around the grill insert that says Indy in the ’50s. The only thing missing was the bark of an Offy.

Talked to the owner briefly about his great paint scheme on the ‘53 (JMC_4797). He said it was a 15-year project and it showed.

Interesting rides were hiding everywhere and this one fits the bill perfectly (JMC_4796). One wonders if the ‘27 body could have been any lower. The interior was all in copper with pop rivets holding everything in place. Note the lip around the back of the passenger compartment to give the driver something to lean against.

Another one that grabbed us is JMC_44794. Ford made 14,508 of these Model 40-760 Cabriolet’s in 1934 and this one survived to become a real looker. By whacking the top, adding a ’38 truck grill with a new insert, running abbreviated fenders it takes on a whole new personality. What pushed it over the top for us in the retro department was adding the ’35 Olds hood side panel vents, Yousa, Yousa!

Sadly we’re going to miss next weekend’s Fathers Day L.A. Roadster Show but will make up for it by being at Bowling Green for the Hot Rod Reunion. If things work out all right we might even get some cool shots for you so stay tuned. 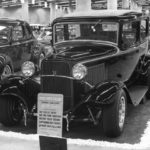 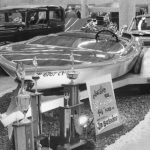 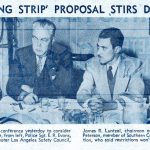 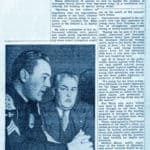 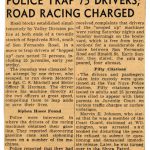 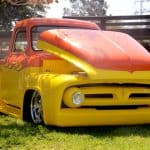 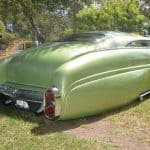 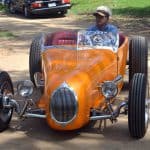 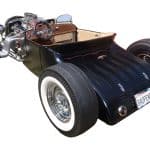 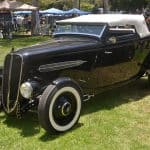